“There are nobodies, there are somebodies and there are Peabodys,” said host Rashida Jones at Cipriani Wall Street in downtown New York City. “This has been a very hard year for the truth. We’ve seen conspiracy theories, spin, propaganda and outright lies try to steamroll over plain facts. We’ve seen truth and science categorically denied, and we’ve seen journalists attacked as the enemy of the people.”

She continued, “We’ve seen real news called fake news. Fake news called real news. And a straight-up disregard for democracy. But the truth doesn’t give in easy: Truth stays its course. And truth will prevail as long as we all have the courage to seek it.”

That’s how Jones kicked off a night that has annually celebrated storytelling by journalists, documentarians, writers, entertainers and podcasters whose impact on society is vital to public discourse. As the Parks and Recreation — a former Peabody winner — alum summed up the honorees, “Truth-tellers and demanders of accountability.” 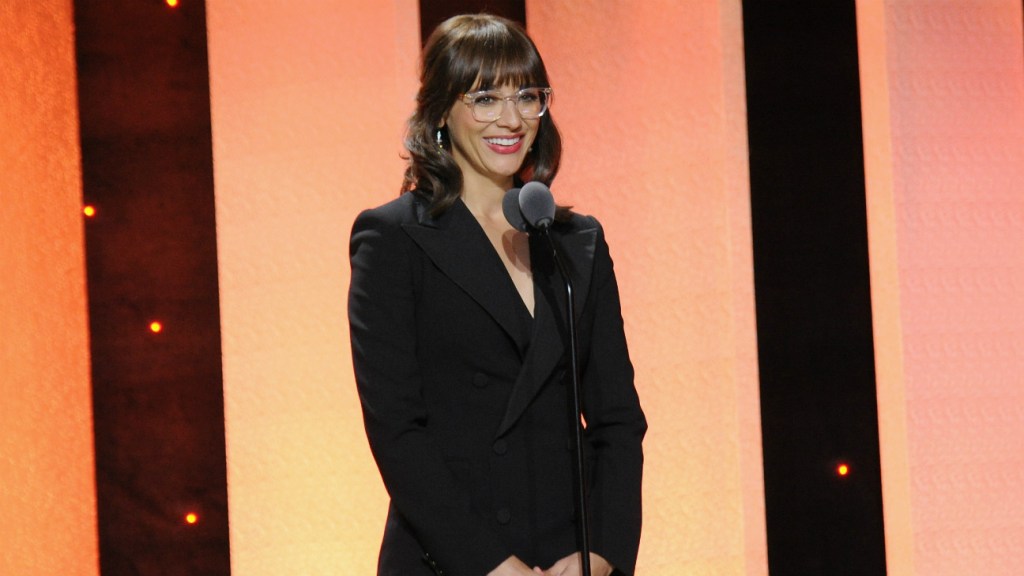 All nominees at the gala were there to accept their award, as the winners were pre-announced (head here for the full list). The night’s individual honoree Norman Lear — the man behind classic TV series like All in the Family, Sanford and Son, Good Times and The Jeffersons — accepted via video message from Los Angeles. “I’ll be 95 in July, and already I’m receiving an award for lifetime achievement,” he joked. Winners in attendance included Horace and Pete‘s Louis C.K., Better Things‘ Pamela Adlon, Atlanta‘s Brian Tyree Henry, 13th‘s Ava DuVernay and Veep‘s Julia Louis-Dreyfus and Timothy Simons.

“We have three different meetings and we go through TV news and radio and podcasts, then scripted entertainment and docs,” jury board member Kim Masters, The Hollywood Reporter‘s editor-at-large, said of the process of selecting the honorees. The result was a diverse selection, with 30 percent representing differing racial, ethnic and sexual identities. “The Peabodys have always said media is very important to us as citizens, but it is very important now,” the show’s director, Dr. Jeffrey P. Jones, told THR. “We’re in a strange political time. When the media is being called the enemies of the people, it’s really important for us to say that we think the media contributes in healthy ways to our democracy.”

Many honorees who took the stage garnered loud cheers from the audience when counting themselves among “so many other distinguished enemies of the people.” But above all, truth was the most prevalent message among the 33 acceptance speeches.

“The context has changed for why people make the things they make and who are being honored tonight,” Jones told THR. “More than ever, we have to remind people that seeking the truth and getting that out there and honoring it is really important because there is something that’s trying to jeopardize it — there’s a very unfortunately loud voice that’s trying to jeopardize that.”

O.J.: Made In America producer Caroline Waterlow thanked those who “make it their job to preserve history and protect the truth.” The team behind ITVS‘ Trapped stressed how truth will emerge when “up seems down and down seems up.” And DuVernay, who was presented her award from friend Lupita Nyong’o, thanked Netflix for being a “disrupter” and allowing her to tell a story “right in front of us” with her prison documentary 13th. Both Henry, speaking on behalf of Atlanta‘s creator and star Donald Glover, and Lemonade executive producer Steve Pamon, speaking for Beyonce, stressed how specific stories become universal in a divisive time.

Women were also well-represented both in the projects being honored and on stage. This American Life: Anatomy of a Doubt producer Robyn Semien took a moment to call out a trend in the podcast category of brave women and rape survivors speaking out. Many highlighted such independent storytelling in a time when public funding is in danger.

“I’m so frustrated by the need for feminism and the need for equality, because we are half the population,” Rashida Jones said. “It’s not a minority issue. It’s something we need to accept as a given and honoring as many women as they are tonight, that is the way to do it. Obviously, women are doing just as much great work, and if not sometimes more, than men.”

The night also provided for many entertaining moments. Adlon regaled the room when recalling how Better Things co-creator C.K. — who ran from his daughter’s dance recital to accept his own award for Horace and Pete — told FX that his Louie co-star was prime to do her own show from a “lady’s” point of view. “I never considered myself a lady and now I’m the favorite of all ladies,” she joked. “I have a show and it’s mine and it’s exactly the show I want to do and can’t believe I’m doing.”

Of her inclusive series, Adlon, who just wrapped filming on the second season, told THR that she’s simply reflecting the world we live in: “It’s massively important to me because my daughters have friends and I’ve become their mom and it’s just an amazing life we’re having.” Henry echoed her sentiment: “There’s so many things happening in this world and so many stories going untold, and I think the public just got tired of not seeing themselves reflected.”

To close out the night, Sen. Al Franken offered a biting introduction of Louis-Dreyfus and Simons, who were on hand to accept the award on behalf of Veep.

After a near-standing ovation, the former comedian and Saturday Night Live writer explained how he used to work with a number of the “supremely talented people who make Veep the show it is.” He then proceeded to describe the HBO political satire and its eerily prescient commentary as following Louis-Dreyfus‘ “lying narcissistic president of the United States surrounded by a gang of craven, incompetent and shamelessly dishonest hangers on.” He then asked, “Remind you of anything?”

Franken added to much applause, “It seemed hypocritical to not honor Veep by speaking truth to power, even if some may think of me as a nut job for doing it.”

Explaining how it is Veep‘s sacred duty to hold government officials accountable and provide the American people with truth through satire, the pair then proceeded to recite some winning lines from last season in an attempt to honor their writers — a rousing moment for the room, though it likely won’t be safe for PBS’ airwaves.

“Let me give you some advice before you’re yanked out of here like a cheerleader’s unwanted fetus,” read Simons.

“I will have my administration come to your shitty little district and shake it to death like a Guatemalan nanny, and then I’m going to have the IRS crawl so far up your husband’s colon, he’s going to wish the only thing they find is more cancer,” said Louis-Dreyfus.

They both agreed that after hearing the lines out loud, “we totally understand if you want to take this award back.” Shortly after, Jones closed the show with a final note of encouragement: “Truth will not be sidelined. Persist, persist, persist.”

Bestowed by the University of Georgia’s Grady College of Journalism and Mass Communication, the Peabody Awards recognize excellence and meritorious work by radio and TV stations, networks, webcasters, podcasters, producing organizations and individuals.

The ceremony will air in edited form June 2 at 9 p.m. ET on PBS and Fusion.