The Peabody Awards ended up being tragically timely, with the organization’s annual celebration of winners falling a day after a high-school shooting in Santa Fe, Texas, left 10 people dead, the deadliest such attack since the school shooting in Parkland, Florida, after which a number of the teenage survivors have become activists for efforts to improve safety for students.

One of Saturday’s 30 winners across TV, radio/podcasts and the web was Newtown, a documentary about the aftermath of the 2012 Sandy Hook Elementary School shooting in Connecticut.

Newtown director Kim A. Snyder has, in recent months, been embedded with the Parkland students and their community working on another doc chronicling what’s transpired after that tragedy.

“It’ll be a very different kind of film than Newtown, I think,” Snyder told The Hollywood Reporter ahead of the awards show. “Whereas I think Newtown seized on a moment, a shameful mark in American history that should have changed everything, this is all about the youth movement and about anger and fury and change, about capturing the spirit of these young people as they navigate trauma and as they make change. And we’re all certain this may be a different moment for the country.”

Snyder was accompanied on Saturday night by survivors from Parkland as well as the parents and sister of slain 7-year-old Newtown victim Daniel Barden. After walking the carpet with their team and the activists, many of whom were wearing black T-shirts with a “no guns” logo and the phrase “Piece Out,” Snyder and producer Maria Cuomo Cole delivered a heartfelt message about the ongoing relevance of their film.

“It’s unfathomable that we stand here tonight after yet another 10 slain yesterday at a high school in Santa Fe, Texas,” Snyder said. “We dedicate this award to all victims of gun violence and with renewed hope, we stand united with the youth movement in their ongoing efforts to create the demand and the change that they deserve.”

Added Cuomo Cole: “It takes courage to give voice to the most unimaginable devastation and one of the most shameful marks in American history. One that should have changed and could have changed — could have saved lives. But no more ‘would haves’ and ‘should haves,’ because now we have what it’s going to take. We have young leadership. These brave activists from around the country, from Parkland and Newtown, we are so grateful to you and we’re with you all the way.”

Declaring she stands with the students from Parkland, Santa Fe and “victims of gun violence everywhere,” Natalie said, “I am asking every single person in this room to get up and do something — we need you. On behalf of my little brother, and children everywhere, I beg you, help us.”

It was a moving speech that prompted the audience to give the elder Barden, a high-school sophomore, a standing ovation.

Accepting for Insecure, star Issa Rae took a moment to point out that it was a rare win for her show.

“We don’t win anything, so this is huge. Nobody’s counting the number of times we’ve been nominated. What is it — 19? But we’re not, so thank you for winning an award that represents storytelling for the culture,” Rae said. “It’s just a huge honor for us.”

Earlier on the red carpet, co-star Yvonne Orji told THR that the award was especially meaningful because “we were honored for not only the work we’re doing, but the message behind the work we’re doing.” She added, “It feels very prestigious. It feels very regal, if you will. I know today’s Meghan Markle’s day, and I feel like today’s our day, too.”

Insecure was honored after its second season, which Orji conceded felt freer than the show’s first season.

“I think we’ve been really proud of all of our seasons to be honest, but, like, season one had to lay the foundation, like, who we are, who are these characters and then by season two, you got to know them, you got to love them, you got to be annoyed by them, and then we were just able to grow as a cast with the stories that we wanted to tell. We were never boxed in,” explained the actress.

“I do believe the world is completely ending — we’re completely fucked. There’s absolutely nothing we can do, but every morning that you wake up and PBS is still around, there’s a little bit of hope,” she said in her acceptance speech, referencing the network behind multiple Peabody winners.

Speaking of bleak comedy, host Hasan Minhaj joked that another Peabody entertainment winner, The Handmaid’s Tale, is, to Vice President Mike Pence “the breakout comedy of the year.”

Accepting for the series, showrunner Bruce Miller also acknowledged the other honorees, saying, “I feel a little out of my element here, because Handmaid’s is fiction and we’re surrounded by journalists and storytellers and documentarians who tell true stories about the real world. Please don’t stop. Keep working to make sure that Handmaid’s Tale stays fictional. You’re doing God’s work.”

Earlier on the red carpet, Miller said that he wished his series wasn’t so eerily relevant.

'The Handmaid's Tale' Season 2: How Silence Gives Way to the "Heroes of Today"

“I would really hope for the show to be untimely as soon as possible. It would be really nice if it was completely irrelevant. I see things all the time [in the news], and it’s scary. Sometimes we shot exactly that scene,” he told THR. “We’re reacting to the same winds of change that are affecting everybody, so it’s not like we have a Magic 8 ball. We’re just making the same guesses that other people are making, and unfortunately those things are coming true.”

The ceremony ended with Burnett accepting the organization’s first-ever career achievement award, given to her by Marvelous Mrs. Maisel star Rachel Brosnahan, who hoped that she would actually meet Burnett after her out-of-body experience accepting a Golden Globe from the veteran comedian.

Recalling that experience, Brosnahan told the Peabody audience: “All I can remember is walking up to the stage and kind of like pointing at her and making some mouth sounds that were vaguely incoherent and then I promptly blacked the fuck out. And after what may or may not have been a speech, I proceeded to exit the stage the wrong way and totally missed our photo op, so I’m hoping that take two goes better than take one tonight and that we get to hand trophies back and forth to each other for the rest of all time.”

Burnett, before she delivered her trademark Tarzan yell and ear tug, praised Brosnahan, and the two got their picture (below). 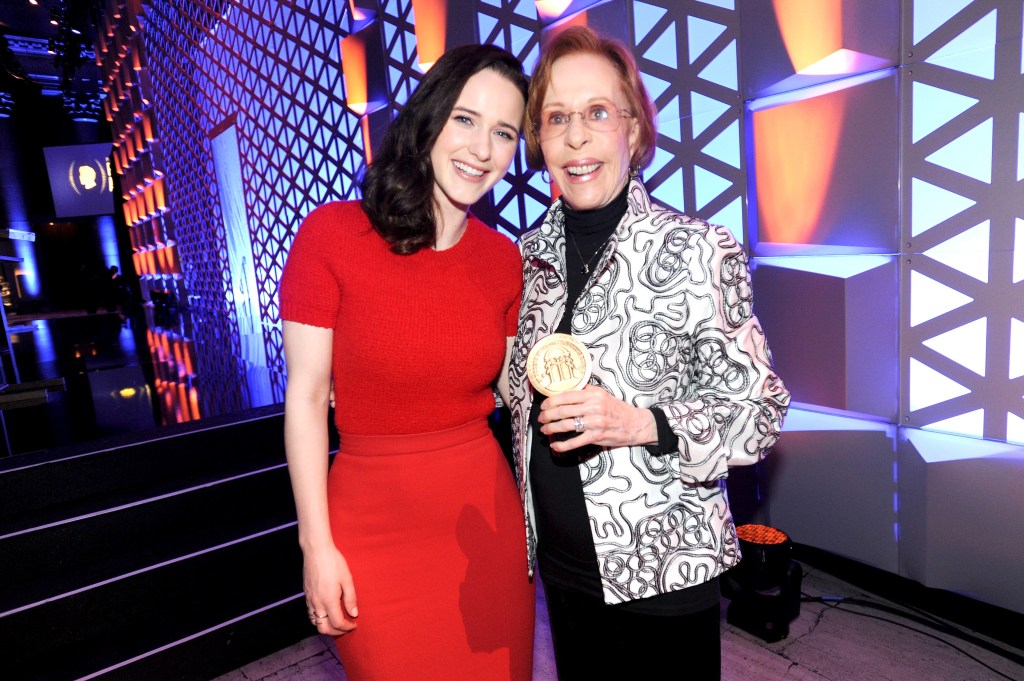