As Disney+, Apple TV+ and other subscription video-on-demand services begin to do battle with Netflix for the global SVOD market, the fight for online advertising is opening up a new front in the streaming wars.

Advertising-backed video-on-demand, or AVOD, dominated talk at CES in Las Vegas in early January, which marks the start of negotiations between media companies, ad agencies and major brands — conversations that will continue through the traditional TV Upfronts and Digital Newfront presentations this spring. On Jan. 13, Fox Corp. TV stations division debuted a new AVOD service, Fox Soul, which will stream ad-backed free content targeting African American audiences in the U.S.

Most significantly, on Jan. 16, Comcast’s NBCUniversal revealed the launch details of Peacock, the streaming platform it will debut April 15 for Xfinity X1 and Flex customers and for additional consumers on July 15. The ad-supported version of the service will be priced at $5 a month for non-cable subscribers, while an ad-free version will cost $10 monthly. In unveiling the service, NBCU outgoing CEO Steve Burke said he expects the service — which will debut with 15,000 hours of TV and film content — to generate between 30 million and 35 million active accounts by 2024. And the service will make much of its revenue from ads, not subscriptions, differentiating it from Netflix and its pure-SVOD rivals.

Much of the ongoing focus will be on how the Comcast unit plans to integrate ad sales within Peacock’s subscription offering. It’s a similar story with Jeffrey Katzenberg and Meg Whitman’s shortform video service Quibi, which bows in April offering both ad-backed and pure paid tiers. WarnerMedia’s upcoming HBO Max also is expected to offer an ad-supported tier.

At CES, NBCUniversal introduced One Platform, which aims to create a single ad technology and sales infrastructure across all of its TV and digital properties. NBCU says One Platform will reach some 211 million adults ages 18 and up per month and offer the kind of micro-targeting and real-time feedback advertisers enjoy with commercials placed alongside videos on Facebook or Google-owned YouTube. “Everything on the [Peacock] sizzle reels seems to dovetail with the viable One Platform strategy approach,” said Harrigan.

A lack of this kind of targeted ad placement is one reason why the business of AVOD has lagged behind subscription video-on-demand. Traditional TV ad booking, where networks use broad demographics such as age and gender to sell viewers to brands, have little appeal online, where the audience is increasingly fragmented. But 2020 could prove a tipping point for AVOD, as major players push into the market.

“The rush to AVOD will be supercharged by some of the studios’ direct models such as Disney’s Hulu and NBCUniversal’s Peacock,” says Guy Bisson, director of digital research group Ampere Analysis. Ampere expects revenue from the global AVOD market to top $62 billion by 2024, nearly double the $33.8 billion it generated in 2018.

“The AVOD gold rush is here, and it represents a prime opportunity for service providers, new entrants and content companies,” says Sarah Henschel, IHS Markit senior research analyst, media. “People don’t want to spend as much on streaming as they do for cable.”

There also is evidence AVOD is attracting cord-cutters who forgo a cable subscription. In the 10 months leading to November 2019, traffic on Pluto TV, which mainly streams live TV from partners including NBC, Discovery, CNN and the BBC as well as from CBSViacom’s cable channels, has nearly doubled to 20 million unique users a month. “And consumption, in terms of hours watched on the platform, has more than tripled,” Pluto TV CEO Tom Ryan tells THR, adding that half of Pluto TV users are cord-cutters or “cord?nevers”: millennials who have never paid for a cable subscription.

This is all good news for license holders, especially outfits with deep libraries. “AVOD will be a lifeline for distributors and content owners who are struggling with a rapidly changing market, in some cases parent companies who are holding back or locking up content for their SVOD platforms,” says Ampere’s Guy Bisson.

The strongest argument for AVOD, however, could be history. Some have written off the traditional linear model of ad-supported television but, as Adam Lewinson, chief content officer at Lionsgate- and MGM-backed AVOD streamer Tubi notes, “The vast majority of TV viewing, some 80 to 90 percent, is still ad-supported.” And as viewers migrate away from cable and over-the-air networks, the appeal of free on-demand TV may be hard to beat. 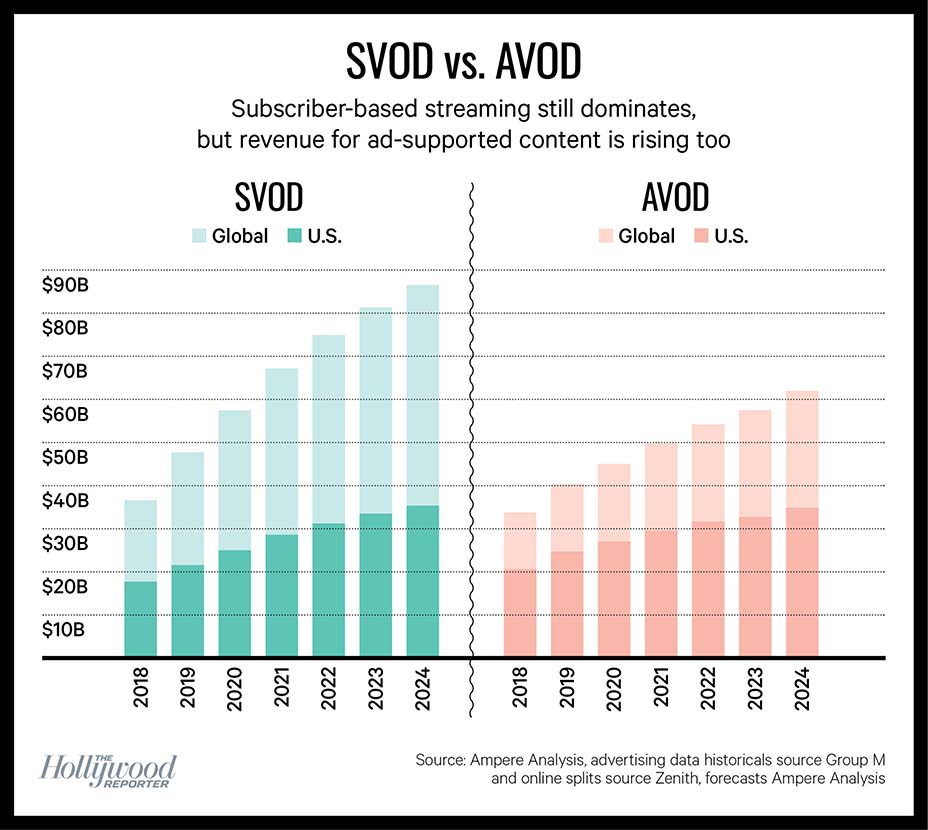 Georg Szalai in London contributed to this report.