“The decision to do an origin story for our hero was crucial,” says co-showrunner Ron Fitzgerald of the famous lawyer (played by Matthew Rhys) who gives the series its title. Fitzgerald and co-creator Rolin Jones scoured the works of Erle Stanley Gardner. “Gardner didn’t leave many clues about Perry Mason — the man, not the lawyer — in the 80-some novels he wrote about him,” Fitzgerald continues. “Neither did the Raymond Burr TV show. We had to create a backstory pretty much from scratch.”

In the HBO series, Mason is a private eye with questionable morals whom Fitzgerald describes as “a warped reflection of the original Paul Drake.” (Fitzgerald and Jones also updated Drake’s character; in the reboot, he’s a Black LAPD officer played by Chris Chalk.) In Mason’s bedroom turned makeshift darkroom hang recently developed photographs of fictional actor Chubby Carmichael, who Mason was tailing at the beginning of the episode.

“We knew we needed a mentor for him,” says Fitzgerald. “Enter E.B. Jonathan.” Played by six-time Emmy winner John Lithgow, Jonathan is an original character who does have origins in Gardner’s writing. “[It’s] the name of a lawyer we found in an Erle Stanley Gardner short story,” Fitzgerald reveals.

“Mason dysfunctionally clings to his past despite a desire to escape it,” Fitzgerald says of this line. The photo-developing pans are a metaphor not just for the past but how the past is making a mess of Mason’s present. And it sparks a back-and-forth between Mason and Jonathan, with the latter attempting to save the former. “Add Lithgow and Rhys, and it’s everything you hoped you were typing,” Fitzgerald says.

Fitzgerald explains that Mason’s home was vital to his character. “Where’d this intrepid lawyer come from? And how’d he get to be the guy who never loses a case?” The Mason family farm was as good a place as any to start. “Clearly the answer is found on a Glendale dairy farm in the middle of a burgeoning airport,” Fitzgerald says of the locale, which is a far cry from its former glory. 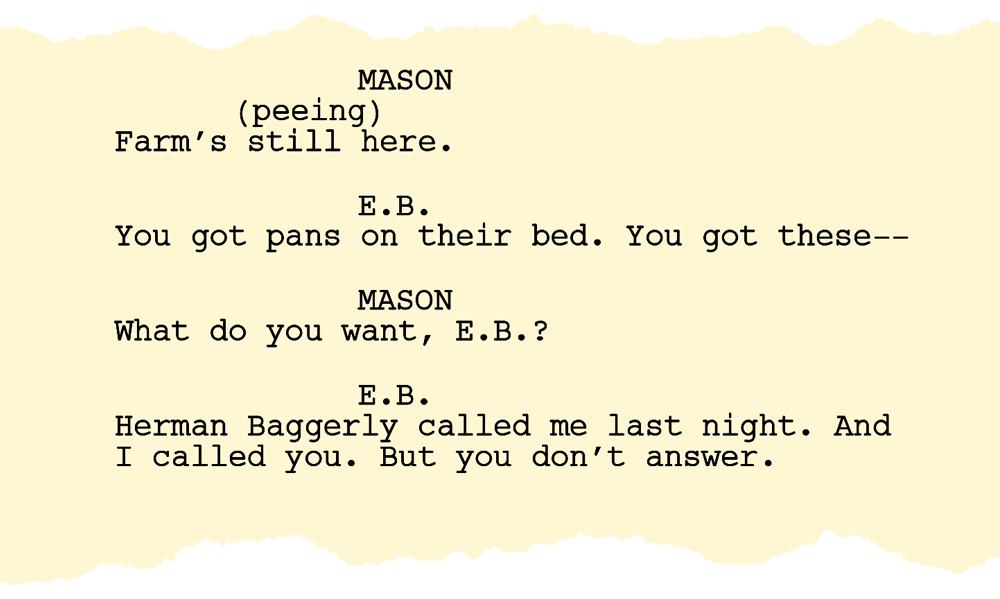 “Originally, we conceived of it as a two-story farmhouse with a hole in the roof made by a wheel that fell off a plane — and, yes, the wheel was still sitting in the upstairs hallway,” Fitzgerald says. The airfield that surrounds the farmhouse reiterates that Mason is on shaky ground, having sold off most of the property to be left with “the only plot that didn’t sell, a vestige of Mason’s family past.”

“The original out of this scene actually involved some cow lazzi,” says Fitzgerald (“lazzi” refers to a comic gag out of la commedia dell’arte). “Or, to be honest, more cow lazzi. Fortunately, we changed that. Rhys tasting the tie stain always begets a smile.”