Months before Pose received its Emmy nomination in July, costume designer Analucia McGorty and her crew of tailors and designers spent hours hand-painting toy horses that would line the underside of a metal petticoat. McGorty said that she sat under the Marie Antoinette-inspired “guillotine” skirt, painting imagery of the children’s toys, and thought, “This is amazing; this is my job. I love this!”

The whimsical garment was just one of the many pieces that McGorty, now an Emmy nominee for best outstanding period costumes, created to help Elektra’s (Dominique Jackson’s) season two look come to life. Crafting extravagant ensembles for Pose’s ballroom scenes is just a day at work for McGorty (the season finale is Aug. 20).

“It’s just plainly the costume designer’s dream show,” McGorty told The Hollywood Reporter. “It’s so visual, so creative, so outside of the normal sitcom you might see on television.”

The research that went into creating some of the show’s biggest looks entailed more than just taking inspiration from the 1991 documentary film. McGorty and her team spoke with consultants such as those from House of Xtravaganza (an active part of the underground New York City ballroom scene since 1982) and ballroom emcee Jack Mizrahi and referred to YouTube videos of the ball scene to learn more about what went into a ballroom look.

Though some of the most exciting and cathartic moments from the show happen to line up with the most vibrant and flamboyant looks, McGorty said she is conscious that not everyone in the voguing scene can afford glittery shoulder pads and custom-made gowns.

“We try to make sure that we’re showcasing different levels of iconic and legend in the ball scene,” she said. 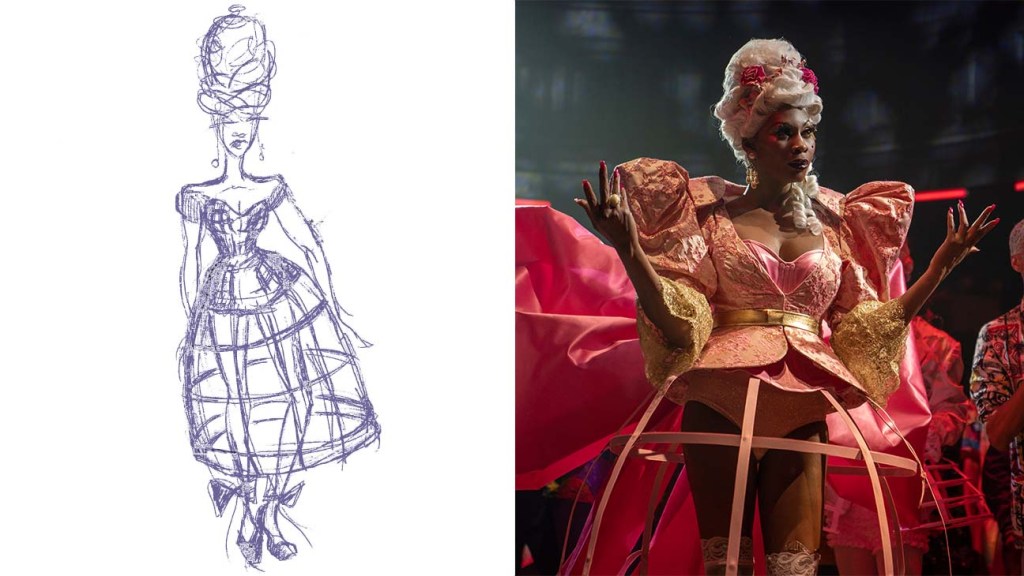 McGorty added that someone’s age and experience level of walking in the balls can determine the outfits they sport. Members of the ballroom scene who are younger or newer to the environment might flaunt thrift shop finds or borrow clothes from their friends, while longer-term figures strut in glamorous looks that can have a bigger impact.

With access to fancier clothes come show-stopping looks, such as those the Pose‘s house mothers don. For the Marie Antoinette piece Jackson wears in the current season’s first episode, McGorty said that she and her team custom-made every aspect, from the pink bodice to the guillotine-like mechanism.

“It was outrageously over the top,” she said.

The decadent ensemble even included a working miniature carousel comprised of the hand-painted toy horses attached to a hollowed-out metal skirt.

Getting Jackson comfortable in the ensemble and perfecting the beheading action required trial and error, experimentation and patience, McGorty said.

In Pose, the theatrics that comes with ballroom costumes don’t guarantee grand prize wins unless the costume as a whole inspires an emotional reaction, as demonstrated by Angelica Ross’ final look as Candy, McGorty said.

“It was so beautiful in the way it was written, and the acting, it was so brilliant,” she said. “I don’t [even] know what it was, but it was just such a happy and beautiful costume.”

In Candy’s final ballroom scene, during the fourth episode of the season, Ross’ character struts around in a red fringe-laden dress as she lip-syncs to Stephanie Mills. The dynamic garment that moves with each of Candy’s steps features a heart made of red fringe, which McGorty said she included as a love letter to the series regular. 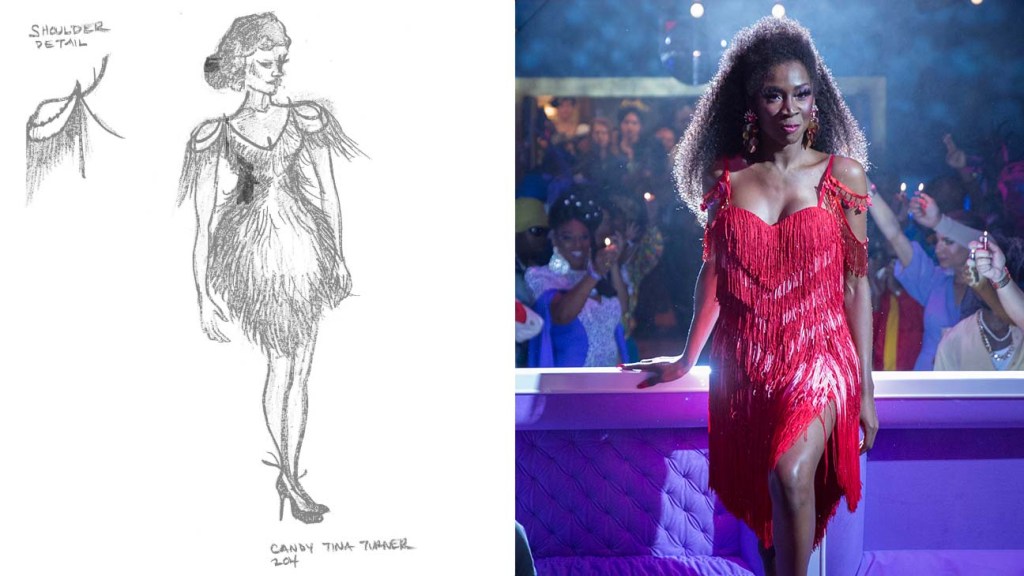 Leaving love notes in her costumes, whether they are red fringe hearts, butterfly accents, graphics, color schemes or photos, allows McGorty to celebrate and pay homage to the artists from the real voguing scene.

“I just try to always be respectful and always talk about the people who have influenced the episode, as well as everybody who works on this show,” she said.

McGorty said that as the program’s costume designer, she carries a sense of responsibility to celebrate and support the LGBTQ+ community and its larger cultural contributions.

“We really want to show our lives to this community and not just my talking about fashion … it’s bigger than that,” she said. “I know we want to continue working with that community so that keeps going.”