On Saturday night in New York, the Peabody Awards, as part of its recognition of stories that matter, honored investigative reports and podcasts about families separated at the U.S.-Mexico border, the survivors of Larry Nassar’s sexual abuse, racism and ISIS — and a number of high-profile TV series.

And, as years past, the current crop of previously announced entertainment winners seemed both amused and humbled by their inclusion in a night also devoted to recognizing serious, enterprise journalism.

“It’s an interesting organization because they honor the most important work being done by the most important people in the world, and then also some TV shows,” The Good Place showrunner Mike Schur told The Hollywood Reporter ahead of the ceremony regarding his Peabody-winning series. “So, it sounds like a cheesy line, but I really feel like it’s an honor to be in the same room as the people who are doing war correspondent journalism. … I personally feel greatly indebted to the kind of people that the Peabody Awards recognizes outside of the entertainment industry, so just to have the same trophy as them is kind of an amazing thing.”

Good Place star William Jackson Harper echoed his boss’ thoughts, telling THR, “I would hope that our show is contributing somehow to society in some way. At least that’s what I’m telling myself is the reason why we’re here. But, yeah, there are people who are doing really incredible things. Especially at a time when journalism is under attack and being discredited so vehemently, to have people that are just so dogged about their commitment to awareness and truth and to be a part of that group is a huge honor.”

The NBC comedy, which offers a supernatural exploration of ethical issues, also has value for people in power, as Schur explained in his onstage acceptance speech.

“We didn’t think that when we started this show three years ago that the word ‘ethics’ was going to appear on the front page of every major newspaper in the country essentially every day for the entire run of the show,” he said. “But that’s what’s happened. It’s hard not to feel, very deeply, that the world would be a better place if more men in power simply asked themselves … three questions over and over again.”

Those questions, Schur revealed earlier, are “What the hell am I doing? Why am I doing it? Is there something else that I could be doing that is better than what I’m doing?”

“That’s ethics in a nutshell,” he said of the concept at the heart of his sitcom, also noting that ethics are “available to anyone” and “free.”

As for those powerful men and their own ethical inquiries, Schur said, “They don’t appear to be doing that. I hope they do. To whatever extent our show has contributed to a national conversation that involves people simply asking themselves [these three questions], we’re eternally grateful.”

Indeed, as critics have noted, The Good Place offers, along with lots of laughs, an education in moral philosophy to its viewers, and Schur, Harper and fellow star Manny Jacinto all said they too had learned from working on the series.

“Anything that is in the show is a thing that I learned while doing the show,” Schur told THR on the red carpet at the Cipriani Wall Street event. “I was not well-schooled in this stuff. I thought it was interesting from a distance, but I didn’t have any real understanding or knowledge of it, and now I would say that I have an 8 to 10 percent understanding or knowledge of it.”

Added Jacinto, “It’s made me question a lot of my motives in terms of how selfish I can be, and am I really doing this for the right reasons, and it really made me question certain actions, whether it be in the industry or with family, in relationships. I don’t know how far of an impact it’s had on my life directly, but it’s definitely made me think.”

Pose writer-director-producer Janet Mock was similarly appreciative of the FX series being honored alongside journalistic exposés, noting to THR that she was trained and spent years working as a journalist while living “through a lot of the experiences that the characters on Pose have.” And in the case of the groundbreaking series, she also recognized the political and cultural value of the show’s LGBTQ representation.

“I think it’s 16 percent of Americans that know a trans person, that a trans person is in their lives, so that means that 84 percent don’t,” Mock told THR. “So the fact that a television show can go into the homes of millions of Americans and let them meet five trans women and all of these other LGBT characters who are struggling at times when they’re often erased and overlooked, I think is the power of TV and storytelling. And I think for us, this Peabody is just a reaffirmation to continue to tell the story the way we tell it from those who’ve lived through the experience like myself.”

While Pose takes place in the past, its focus on LGBTQ rights and experiences is particularly timely, and Mock explained that the current political climate would continue to inspire storylines in the 1990-set season two.

“We talk a lot, this season, about this sense of activism,” she said. “Once you’re outraged, what do you do with that anger and that outrage? How do you channel it to make greater good, to make changes in your own life? I think a lot of us experience that. Every day there’s a new outrage, so for us, it’s how can we give our audience a new way of thinking and a hopeful way of thinking about how to hopefully act in their own spaces in the world?”

Additionally, Pose co-creator Steven Canals said the New York-set series would reflect the politics and culture of the city at that time: “At that point in the city, we had a new mayor in David Dinkins, who was the first black mayor of the city; Act Up, which was fighting for rights for people living with HIV/AIDS, was omnipresent in the city; and then on the fun side, Madonna’s ‘Vogue’ was released and suddenly this community that was a subculture became mainstream.”

The Pose team was out in force for the Peabody Awards and, as he’s become known for, star Billy Porter made a statement with his red-carpet look, turning heads in a dramatic pink gown.

Porter told THR that the ensemble was a cut look from a photo and video shoot he was participating in on Saturday.

“And I decided, I’m going to wear it tonight,” he said. 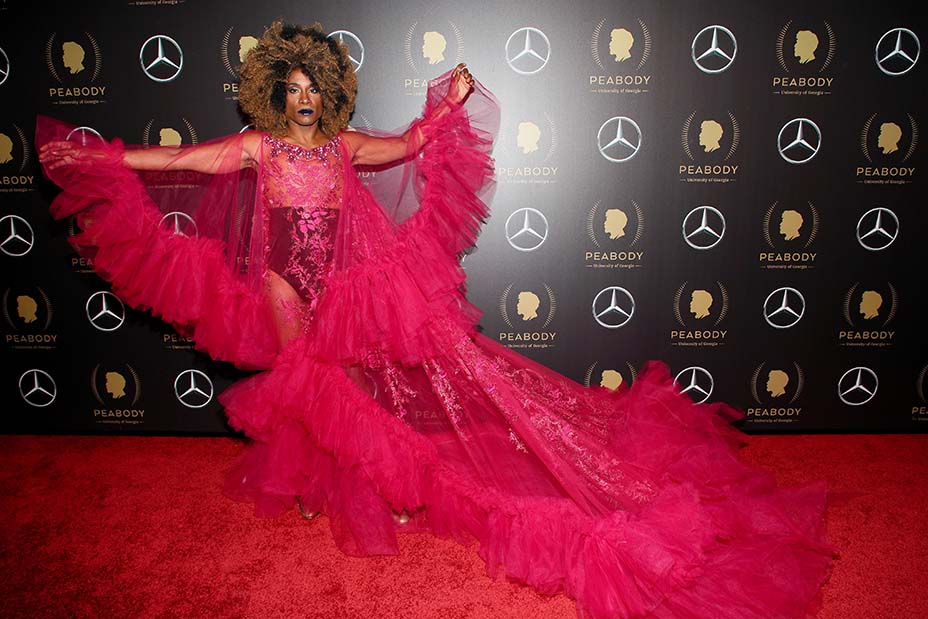 Patriot Act‘s Hasan Minhaj, who hosted last year’s ceremony, where he accepted his first Peabody, won his second award this year, and he expressed gratitude for the journalists and documentary filmmakers he was being honored alongside.

“It is very humbling and it’s surreal to be included in this amazing list of people that do incredible work, especially considering that a lot of the people at this awards show specifically are being honored for their work in investigative journalism and documentary filmmaking. I don’t take that lightly considering what we do on the show,” Minhaj told THR. “The work that journalists are doing is the backbone of what we’re doing on the show so without their take, without their interviews, without their pull quotes, there is no show. That’s the delineation. We’re a news-driven comedy show.”

Other entertainment winners honored Saturday night included Killing Eve (executive producer Gina Mingacci thanked “every person who’s been on this show just to be beautifully killed by Villanelle [the assassin played by Jodie Comer]”); Barry (creators Bill Hader and Alec Berg weren’t in attendance but demonstrated their skill at dark comedy from afar as star Stephen Root read prepared remarks, after he and other members of the Barry team humorously passed on reading the note, and discovered to his dismay as he neared the end that Hader and Berg had jokingly fired him and his onstage colleagues from the show’s third season); and Random Acts of Flyness (creator Terence Nance had the crowd laughing as he thanked those who made, awarded and even watched the HBO show and urged others to take a chance on it).

“We almost died making this show,” Nance said onstage, before praising HBO for its willingness to “lean in” to make the “scary show” and the Peabody jurors for facing their fears in honoring it.

“This really proves that television’s rules, regulations, best practices … neurological effects, terms and conditions, formats, psychospiritual intentions, genres, biases, algorithms and pessimisms are very brittle and withered and thus ripe for our program to disintegrate and repopulate,” Nance said. “Keep your head on a swivel. … Lean into our vortex. It’ll be all right. You’ll be safe. You’ll live.”

“When we made the show, we were kind of, in a sense, having a conversation with ourselves that could hopefully grow larger, grow more intense and grow necessary,” he said. “I think that this award hopefully continues to shine a light and bring eyes to it and brings souls to it. It’s a conversation if only there’s another side to it.”

Later in the evening, career achievement honoree Rita Moreno got emotional as she dedicated her award to her hardworking, proud mother.

“I am keenly aware of the high value that the Peabody places on storytelling. I am so humbled that you consider the story of my life and career worthy,” the actress said in her speech after lifting the award triumphantly over her head as she received a standing ovation. “Like most, my story is predicated on another story and that story was my mommy’s, who, when I was 5 years old, set out from Puerto Rico for New York to find a better life for us. Every single day of my childhood, my mommy, Rosa Maria, walked me to school, then climbed the bus that carried her from 185th Street and Wadsworth Avenue to 42nd Street and 5th Ave., the heart of the Garment District. … That was my mommy, the sweatshop seamstress. It was backbreaking work. She knew the prick of every pin. But it was a job and it paid the rent, but we just barely got by. She made my clothes, she made my costumes … she put ribbons in my hair. This was her art. My mommy’s art. So that I could perform at every bar mitzvah or wedding reception that would book an 8-year-old artiste. … My mommy, the sweatshop seamstress — no, my mommy, the artist. Her joy made her proud. My mommy, costume designer to a star, the Rita Moreno, before I ever was. My fame is her fame. Therefore this beautiful, precious honor, is also in her honor.”

Rita Moreno Talks 'One Day at a Time,' 'West Side Story' Controversy and Marlon Brando