The co-creator, who moderated a discussion with co-creator Steven Canals, producer/writer/director Janet Mock, producer/writer Our Lady J and stars Billy Porter, Mj Rodriguez, Dominique Jackson and Indya Moore, revealed three key details about the upcoming season: The series will time jump to 1990, on the day Madonna’s “Vogue” is released; the song will play a key role in the season; and he and the writers created a role especially for LuPone (who will share many scenes with Rodriguez — much to the chagrin of Porter).

Billy Porter on How 'Pose' Broke Through the "Homophobic, Transphobic Ceiling of Silence" (Guest Column)

“[LuPone] loves the show and we wrote this part, so she’s coming to play with us in a couple of weeks,” Murphy said on the panel, where he discussed some of season one’s major moments with the cast and writers following a screening of the emotional sixth episode of season one, “Love Is the Message,” which Mock directed.

The panelists also touched on topics including Porter’s eye-catching Oscar ball gown, the development of the series, Moore’s activism and past as a sex worker and battling rejection.

As for season 2, Mock told The Hollywood Reporter that it will include “a lot of the same ingredients and the DNA of it all.” That includes “family, glamour, shadiness, bitchiness — but then a lot of heart, too.” She also revealed that, aside from LuPone, there will be additional new characters in the form of a new house in the ball scene.

“There will be a new house,” Mock said. “There will be a popular song from 1990 heavily featured, which will spark a lot of new aspirations and dreams for the people within the ball scene,” she said, alluding to the importance of “Vogue.”

“We’re going to be leaning into what was happening sociopolitically in New York,” he said, “and so we’re going to be addressing Act Up and access to medical care for individuals who are living with HIV.” 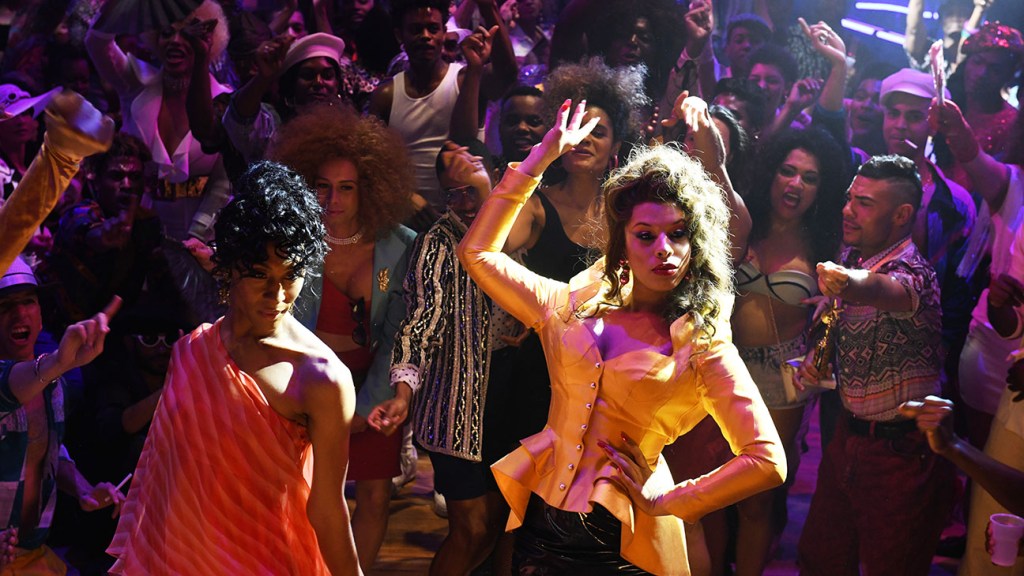 After the critical acclaim brought about by Pose‘s first season, it makes sense that the cast and creators would feel pressure to top themselves. But Canals told THR that the show’s critical success and award nominations just made him eager to tell more of the story.

“It actually made me really excited to go back and work on season two, because now I know that there are so many people who support us and believe in us,” he said. “The pressure was high for season one because we didn’t know how it was going to be received. I had no idea if folks were going to understand what we were hoping to accomplish. And I think the moment that I saw the reviews for season one, there was just a huge exhale, just a sigh of relief. ‘Okay, great. Everyone gets it.’ So going into season two, I was like, ‘Oh, this is fun.’ We just get to play in the sandbox and think about who these characters are and digging a little deeper in terms of their journeys.”

Jackson echoed the sentiment, telling THR, “The pressure of the attack is now gone. Now it’s the pressure of being better than the last time. That’s my pressure.”

Porter, who was nominated for a Golden Globe for his role as ball emcee Pray Tell, told THR that the accolades don’t motivate his performance, because that’s simply what he signed up for.

“You do the work. It’s not about topping what you did. It’s about being present in the moment that you’re in,” he said. “That’s all we can do. That kind of pressure is what spins people out and makes crazy. I feel a responsibility to go deeper. That’s different from feeling pressure about topping [what you did]. You know, now keep going deeper — that’s not pressure. That’s the requirement. That’s what you do. That’s the job.”

Pose has the largest-ever cast of trans lead actors on television and is telling stories about groups of people who haven’t necessarily gotten their time in the spotlight. That representation is baked into the series, the cast and creatives said, and they feel a responsibility to support those groups. But they’ve always been involved in efforts to support those communities, and they hope to continue to do so.

“I’ve worked in my community ever since the year 2000,” Jackson said. “I have worked with many nonprofit organizations. And right now for me, the pressure of trying to keep it up and trying to continue to empower my community doesn’t really feel like pressure. It feels like a challenge. And the challenge is to keep myself together so that I can show them that they can do it, too.”

Said Rodriguez, “I feel like the responsibility that I have is always wanted, so I’m good.”

When the cast returns to the set next week, Rodriguez predicts “a firecracker.”

“When we’re on that set we live our lives. We have so much fun, and we just — we are a family,” she said. “A lot of us have known each other before, so we just make sure that we keep that close-knit connection on set. So I think it’s gonna be a bunch of firecrackers and fireworks and confetti.”

Said Mock, “People wanted more voguing. They wanted a lot more choreography and a lot more dancing, and so we’re doing a lot more of that this season. But at the same time, also making sure, too, that we have those quieter moments that people also love, which was a lot of Blanca and Pray Tell together and a lot of, you know, people gathered around a table eating — those little, very universal things, I think that we realized was what really, really brought people back to the show over and over again. They expected the spectacle, but they weren’t ready for the heart. And I think that we’re going even deeper into that.”

Pose is set to return to FX later this year.