While Garth Ennis and the late Steve Dillon’s classic comic book series features its fair share of controversial content — storylines centered on Nazis included — it stops short of showcasing Adolf Hitler as an active character. The television series based on the comic, however, is another story. The third episode of Preacher‘s second season sees Game of Thrones veteran Noah Taylor stepping into the role of Hitler, who now resides in hell and lives just a few cells down the hall from fellow inmate Eugene (Ian Colletti), who was unwittingly banished to the underworld by Jesse Custer (Dominic Cooper) back in season one.

Speaking with THR, showrunner Sam Catlin says the idea for having Hitler on the show originally stemmed from executive producer and co-creator Evan Goldberg.

“Evan said at some point last year — when we were in the middle of season one, he sent me an email: ‘Hitler … he has to be in hell. He has to be in hell with Eugene,’ ” recalls Catlin. “I didn’t think much of it at the time, but when we got back in the writers room, I thought, ‘OK, how could you be in hell with a bunch of people and not have Hitler there? How can it be hell without Hitler?’ “ 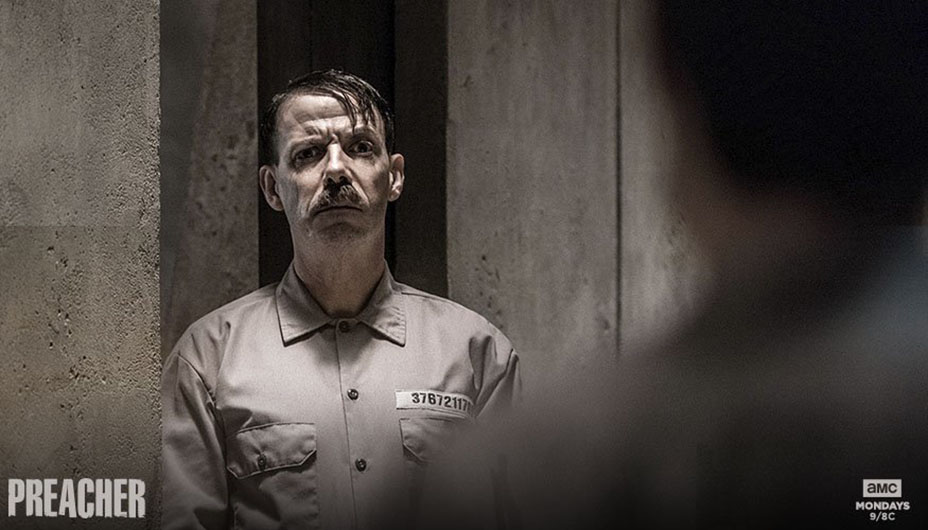 The episode begins in hell, as Eugene repeatedly relives the day he disfigured his face in a botched suicide attempt. Toward the end of the hour, Eugene is released from his hellish prison cell by an unknown force. When he steps out into the hallway, he sees only one other flesh-and-blood individual: Hitler, who offers nothing more than a quiet hello. Catlin is tight-lipped on the exact plans for the show’s version of Hitler, though he promises that history’s worst monster will serve as “a great foil to Eugene, and his relationship to Eugene and how he helps Eugene learn more about himself over the course of the season is very provocative, I think.”

Viewer reactions to Hitler’s arrival are likely to vary wildly, but what does Eugene think about his fellow traveler? “We’ve always felt that Eugene was the one true Christian on the show,” Catlin says in that regard. “He’s the most self-effacing and modest and takes the teachings of Christianity most to heart, which is why we always thought it was funny that he’s the one who ends up in hell — perhaps the least deserving of all of our characters. As any true Christian is confronted with Hitler, who are you to judge him? But also, who are you to forgive him, is another question. That’s what Eugene is wrestling with in a lot of ways in season two.”

“We’re not trying to rehabilitate Hitler,” adds Catlin, “but I will say, by the end of the season, hopefully people will have a degree of affection for at least our Preacher version of Hitler.”

Hitler isn’t the only new Preacher villain on the board, either, as episode three introduces a fan-favorite figure from the comics: Herr Starr, a cold-blooded operative who works for a shadow organization known as The Grail and harbors his own secret plans for Jesse and the divine creature Genesis lurking inside of the Preacher’s soul. Pip Torrens (The Crown, Star Wars: The Force Awakens) is the man tasked with bringing the iconic comic book villain to life, and Catlin promises fans won’t be disappointed.

“He’s a fantastic actor,” says Catlin. “He looks so much like the Herr Starr of the comics, at least in my mind. From my first reading of the comics, this was a character we couldn’t wait to bring to the screen. He’s blunt, he’s perverse, he’s ruthless, and he’s sort of, in his own way — for all of his power and all of his cruelty — he’s also very unlucky as well. He’s a lot of fun. He’s a lot of fun for us to write, and Pip playing him in this role … I think people are going to be very blown away.” 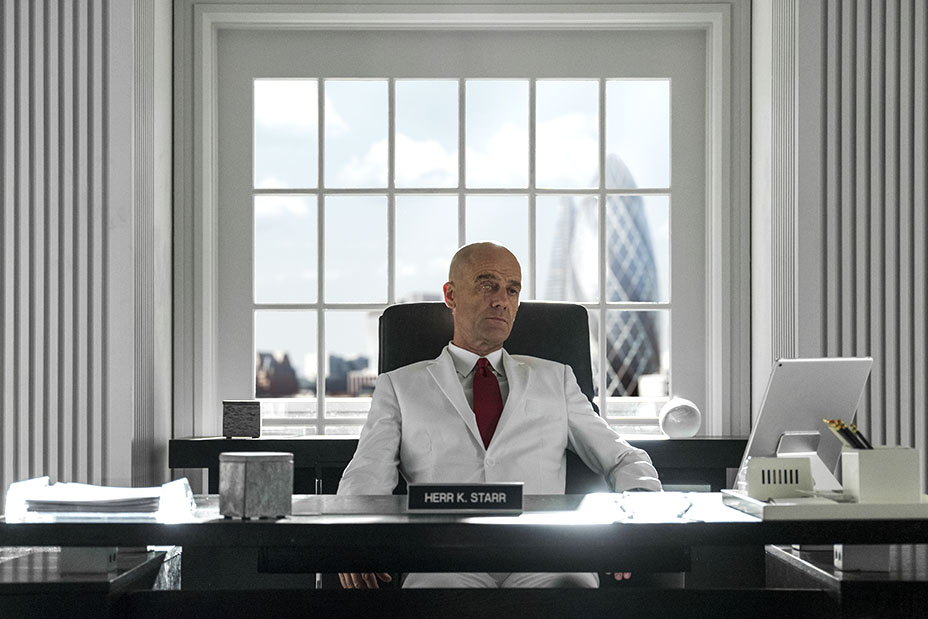 Describing Starr as “a cheesy Bond villain” who loves few things more than a good monologue, Catlin says the ruthless villain’s relationship with Jesse will evolve over the course of the season.

“He has enormous resources and very little morality at all. It’s a terrible combination for the rest of the world and for Jesse,” says Catlin. “But he can also be persuasive. His relationship to Jesse over the course of season two will change from executioner to more of a seducer as it goes along. He’s been a real joy to write, for sure.”

Starr and Hitler aren’t the only new villains in the Preacher universe, as hinted at in episode three’s closing moments: Tulip (Ruth Negga) is set to come face to face with an enemy from the past in next week’s appropriately titled “Viktor.”

“We’re going to learn more about Jesse and Tulip back in the day when they were robbing banks and were high-flying criminals,” Catlin says of the season’s fourth installment. “We’re going to learn what broke them up from all of that and how they ended up so far apart when we started season one. We know where Jesse went when they broke up. Viktor is, in a lot of ways, where Tulip ended up.”

What do you think of the new Preacher villains? Is the Hitler twist too controversial, even for Preacher? Sound off in the comments below.