[This story contains spoilers for the first episode of USA Network’s The Purge, “What is America?”]

After four films filled with bloodshed and brutality, the masterminds behind The Purge have their eyes on a new victim: television.

The USA Network adaptation of the horror film franchise, simply titled The Purge, has officially arrived, introducing a new cast of victims and victimizers alike to a dystopian America in which all crime is legal for one night only. Created by James DeMonaco and featuring a first episode helmed by Emmy-winning director Anthony Hemingway (American Crime Story), the latest Purge protagonists include Miguel (Gabriel Chavarria), a U.S. Marine searching for his sister Penelope (Jessica Garza), a willing sacrifice-in-the-making as a member of a Purge-worshipping cult; Jane (Amanda Warren), a business executive in the midst of a crucial night at work, all with an eye toward taking out her cruel boss (played by William Baldwin); and Rick (Colin Woodell) and Jenna (Hannah Emily Anderson), a married couple whose firm anti-Purge stance is about to be tested, thanks to a prospective business partner.

Appropriately enough, the first hour of the series tracks the final hour or so of the day leading up to the start of the Purge, with an occasional clock appearing on screen as a veritable ticking time. According to executive producer Jason Blum, one of the key minds behind the Purge film franchise as part of his Blumhouse Productions, fans shouldn’t count on the rest of the season following a real-time format.

“But that’s a good idea, The Purge in real time,” he muses, speaking with The Hollywood Reporter. “That could be a good idea for a future season.”

Indeed, the ideas are already turning about what could come down the pike next for The Purge, which first began as a small scale horror film starring Ethan Hawke as the patriarch of a wealthy family who find themselves targeted during the deadly night. Since then, the scope of the films has expanded to show the Purge in action on the city streets, with colorful villains and shootouts aplenty, extending the lore all the way back to the very first Purge in this past summer’s appropriately titled fourth film, The First Purge.

In the episodes ahead, the event’s formation will become a key part of the backstory for certain series regulars. According to Blum, however, the goal is to make sure the USA Network adaptation is as new user friendly as possible.

“We talked about whether we wanted to connect the TV series to the movie, or make it a new Purge world,” he says. “There are a few easter eggs in this series, but the series is all new characters and in another world where the Purge exists, separate from the movies. Eventually, maybe one day, we’ll connect them, but we really invested new characters for the television series.” 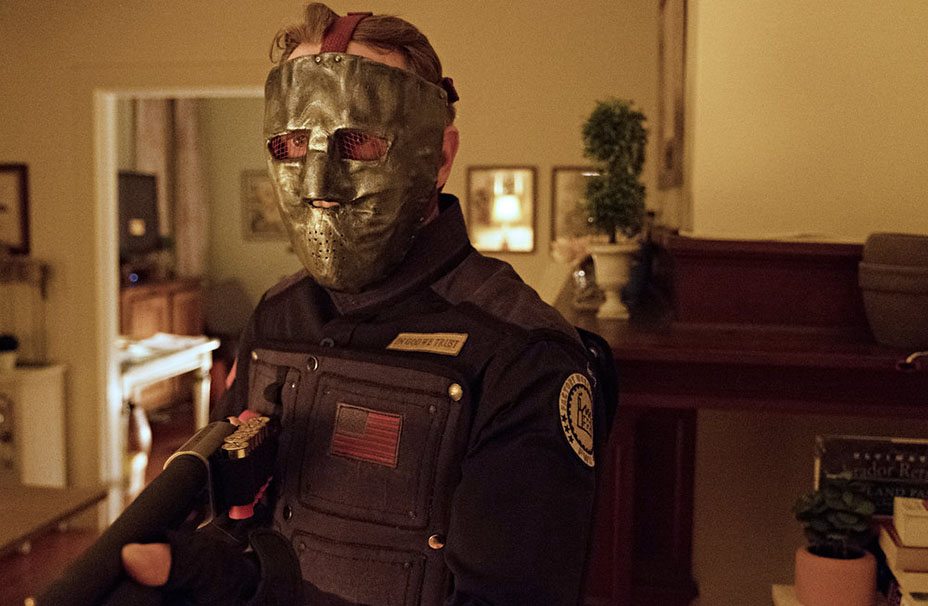 For now, by the end of the premiere, the new characters find themselves in the midst of bubbling tensions that haven’t yet reached a full boil — but for Penelope, the horror starts to become all too real as she watches her cult sacrifice its first member in violent fashion, hacked to bits before her very eyes. The violence mostly ensues off camera, a relatively tame affair considering the level of brutality seen in the films, though Blum insists the series won’t shy away from visualizing the core premise moving forward: “It’s very hard to comment on violence and not show it.”

Thematically, anyone familiar with The Purge film franchise will have found similar ideas littered throughout the opening episode of the TV series, such as in the Rick and Jenna storyline. The married duo spend much of the premiere rubbing elbows with supporters of the New Founding Fathers of America, the political party that presides over this dystopian version of America.

“In France, the movies are called American Nightmare,” says Blum, speaking toward the franchise’s core themes. “There are lots of ideas about class wars and race wars, but the main theme of The Purge is that America has a very perverted relationship to firearms. Every time there’s a shooting in the country, the relationship gets more perverted, not less. The Purge is a cautionary tale about if we keep going with the idea of arming ourselves more every time there’s a shooting, when does that stop? The Purge is a cautionary tale about exactly that. The only heroes in the movies are people who understand that the Purge is a sick notion and it brings out the worst in humanity.”

“The world in The Purge is a hopeless world and very, very sad,” he continues. “It’s the worst outcome of where the NRA could take us.”

As for where Blum, DeMonaco and their partners could take The Purge next? It’s certainly a question they have batted around internally, not to mention being the question that launched the series forward in the first place.

“When we started making multiple movies,” says Blum, “we would come up with endless scenarios that would be interesting to explore if a Purge existed. Not even scenarios that necessarily took place the night of the Purge. Would people get in fights less often because they might be worried that whoever they got in a fight with would wait for the Purge and kill them? What would happen in other countries? When we started making multiple movies, that was when we felt the ideas were rich enough to fill the real estate of a series, as opposed to a series of movies.”

With the first episode now unleashed, do you agree with Blum that The Purge has enough thematic real estate to fill out a series? Leave your thoughts in the comments below, and keep checking THR.com/LiveFeed for more coverage of the new thriller.