Quantico debuted its latest series reboot Monday night, effectively swapping in Trump for terrorism and kicking off the plot for the remaining nine episodes in the ABC drama’s second season.

Since Trump’s election, Quantico, like many shows currently airing on broadcast and cable, has shifted its lens away from fantasy in a bid to reflect more of today’s real-life political climate and cultural landscape. The series, which has been unfolding in dual timelines all season long, is now merged into one single story in order to follow a ripped-from-the-headlines procedural approach.

“We’re in sort of a paradigm shift for the show,” showrunner Josh Safran tells The Hollywood Reporter of Monday’s episode setting up the format for the remaining weeks. “We’re now looking at the ways in which people profit off of terror and it allows us to build a plot around something that is real and possible.”

Returning from a three-week hiatus, and following the show’s Jan. 23 soft move from Sunday to Monday night, Quantico now has Alex Parrish (Priyanka Chopra) and her fellow CIA and FBI agents assembled into a covert task force hunting to uncover the collaborators behind U.S. terror attacks. As explained by Quantico‘s female president (played by Marcia Cross) the collaborators fall into one of eight “pillars,” allowing Safran and his team to explore stories under the banners of money, law, logistics, government, technology, ideology, defense and the media.

“The show has shed its skin a couple of times, but this is the biggest,” says Safran. “It started as a paranoid thriller and mutated into a sexy soap and lost a lot of the sexy soap-ness and became more of a hard-edged action show this year. Now it’s shedding its skin again to become a little bit of a West Wing junior, if I can even be so lofty as to make that connection. So I wonder if our audience will want to stick around for conversations of political strategy and votes in the House and the Senate and if they’ll find that as entertaining as people in masks with guns interrogating and killing people.”

The next episode will tackle fake news, a story inspired by the real-life Pizzagate incident, and an upcoming episode will see the diverse Quantico characters debating a Muslim registry order. In coming weeks, the show’s version of Trump, which Safran describes as a parallel stand-in but not a mirror image, will make his entrance, bringing with him more on-the-nose versions of Steve Bannon, Paul Ryan and other members of Trump’s inner circle. And Hunter Parrish (Weeds, Good Girls Revolt) has joined the series as first son Clayton Haas, a political strategist whom Safran likens to former Obama speechwriter Jon Favreau. 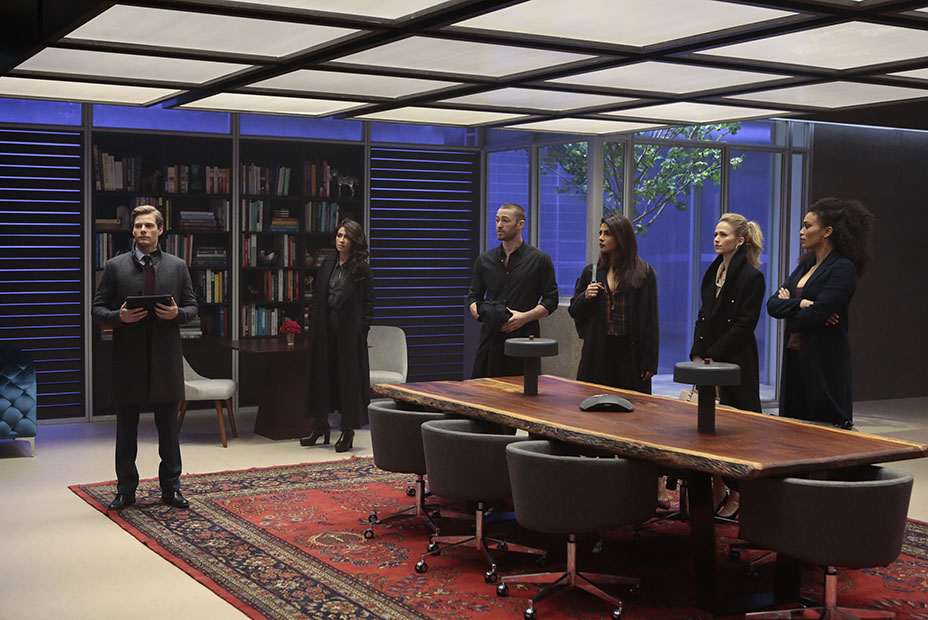 “We decided that we were going to do speculative fiction as opposed to staying very close to reality because we knew we could never keep up with reality,” Safran explains of the decision to tackle politics while still functioning as an ABC nighttime soap drama. “With our characters, it’s not really Democrat vs. Republican, it’s about an abuse of power. That’s what this entire season has been about, but especially the remaining episodes: Can we all find a way to meet in the middle?”

Despite the timeliness of the season, and, in some cases, even tackling topics before they ended up making headlines, Quantico is still struggling to attain it’s season-one audience glory. Last year, the show was a DVR star by the end of the 2015-16 season, but it fell by nearly 50 percent in the targeted demo in its second-season premiere. ABC moved the series to Monday in a bid to boost ratings, but not until this Monday’s return did the show see a modest jump.

“Honestly, the ratings are kind of off my radar, which is a refreshing and new thing. We’re not moving the needle with this” says Safran, who cited the Nielsen blackout of last week as proof that the system is outdated. “I’ll never understand why, when so many people have DVR boxes, we are still relying on something else to tell us what people are watching. Regardless, the show will either come back or it won’t. I highly doubt we’re going to double in the ratings and I also highly doubt we’re going to lose half of our audience. I’m blissfully ignorant and just keeping my head down trying to make the show as strong as possible.”

Still, the numbers beg the question: Are there too many shows tackling Trump on TV?

“We’re not special,” he acknowledges. “That’s the role of art in any time, to reflect the time that it’s in. If it’s a time of good prosperity, often we don’t look to politics to write about, we look to write about different times or different period of strife in peoples’ lives. But when there’s political upheaval or unrest in the country, artists tend to skew towards politics and how they relate to people. That’s what you’re seeing is so many shows turning in that direction.”

Safran says its freeing to not have to invent so many stories and villains, since the real world is providing the material, but he notes one important distinction.

“I look to The Good Fight and their recent episode about the shelved SVU episode about Trump — they took something very specific and turned that into a story,” he says. “Instead of doing an overarching, ‘We’re going to do Trump,’ we’re looking at specific things, like fake news and the Muslim registry.”

While he’s grateful to be working on a show where he is able to tackle real life head-on, and also debate both sides, he says it’s “probably unlikely” that a lot of Trump supporters are tuning in to Quantico.

“It’s a show about inclusion and where the women have what would have been typically male roles. It’s all about people of color working together to do what’s right,” he says. “We believe in women in power and everyone’s equal and freedom for all. We don’t exactly stand for Trumpian instincts by our very nature. You’ll probably find that 24: Legacy and partially Designated Survivor, which takes more of a bipartisan look at things, have more of a viewership that voted for Trump or who are pro-Trump than us.”

'Quantico' Boss on Post-Trump Shift: "It's Not a Show Just About the Liberal Elite"

The theme of the remaining episodes is also spurred by one common frustration.

“Our team of agents is going to figure out the eight parties that would be behind a terror attack on American soil. They will end up figuring out who those people are before the end of the season, but can they actually prove anything and can they actually stop anything?” he says. “Much like our current political landscape is such where the president can speak complete and utter fallacies and there is no consequence other than somebody coming forward and saying, ‘Well that’s not true,’ our frustration over the lack of accountability of the top positions of power is partially what drives the rest of the season.”

If Quantico does get a third season, Safran says he would continue to follow the procedural approach and would probably only utilize a dual timeline to bookend the season. The season-two finale will function both as a series and season finale, something Safran says will be satisfying either way.

“The ultimate reveal of where the show is leading by the end is something that has never happened before in the world, but it is not outside the realm of possibility,” he says of the final reveal still being grounded in reality. “It’s more of where we believe the American political landscape could go, as opposed to where exactly it is going. The end of the season doesn’t end in terrorism and bombs, it actually ends in the world of politics. Not all of the characters may be there and it’s a bit of a potentially new world at the end, so hopefully if we get a third season, we’ll see what happens.”

What do you think of Quantico‘s new direction? Tell THR in the comments.

Kiefer Sutherland Explains How 'Designated Survivor' Is Taking on Trump

How Fox’s 'Shots Fired' Is a "Mirror of America"