Nas is still trying to process life’s latest full-circle moment. As a young MC in the early 1990s, fresh from the Queensbridge projects with his first music video to orchestrate, Nas turned to Ralph McDaniels, a man who needed no introduction to a generation of music lovers in Manhattan. His was the face they saw on the small screen every day on New York’s public access channel as the host, founder and resident VJ on Video Music Box.

“It was the best show on television,” recalls the rap icon of the long-running music video show. McDaniels was a local celebrity who dabbled in directing, so Nas requested his eye and talents. Now, nearly 30 years later, Nas is hours from presenting his feature documentary debut on Showtime with You’re Watching Video Music Box, a 90-minute film that unpacks the history of the show while shining a spotlight on McDaniels’ legacy in hip-hop. It features never-before-seen clips of some of the game’s biggest stars like Jay-Z, Biggie Smalls, LL Cool J, Wu-Tang Clan, Fat Joe, MC Lyte, Queen Latifah and dozens of others.

Mariah Carey Announces 14th Album, 'Me. I Am Mariah ... The Elusive Chanteuse' (Video)

“This is my first time directing, and it’s his film,” says Nas, who also appears in the doc in an interview and vintage clips from his early days on the rap scene. “I’m just amazed. I’m still in amazement.” He shook off the emotion for a 20-minute conversation with The Hollywood Reporter about what McDaniels means to him, whether he has plans for more directing gigs and his two new Grammy nominations.

In the opening moments, you say, “This is a story that needs to be told and a story that I’ve always wanted to tell.” How did this come together that you were about to be the one telling it?

I happen to be having a great run with an amazing company called Mass Appeal, and we specialize in securing the culture. [The documentary] was something that made sense for us and something that made sense for Ralph McDaniel and for Video Music Box. It also makes sense as a part of this whole Hip Hop 50 movement, which will be in 2023. So it was perfect. We were perfect for each other.

Ralph McDaniels is someone that really just changed the whole entire music world, from playing videos to giving us visuals of some of our favorite artists that we only heard on mix shows. These visuals took us to the record stores to buy their records in New York City. He was before his time and we wanted to be involved with sharing his story.

Some of those visuals belong to you. You hand-picked him to direct your first music video. Take me back to that decision and why you did that?

Oh man, I was just beyond honored to. I used to run home from school to catch the show, which was the best show on television as far as music and art was concerned. Soul Train was on [at the time] but his show was a whole different thing. I couldn’t wait to run home and watch what he was giving us — everything from Run DMC to Billy Ocean, everyone. To actually have that guy who was in my living room direct my video when I was coming out with my first record, there was nothing bigger or better. It’s a complete full-circle moment for me because this is my first time directing, and it’s his film. I’m just amazed. I’m still in amazement.

Did you stay in touch with him all of these years?

Well, he’s a pillar in New York City, so I always would see Ralph around different places. He’s always around; he didn’t go anywhere.

The documentary is layered, telling the story of Video Music Box but also the story of hip-hop in the city and the personal history of Ralph. What surprised you most about his life?

I was mesmerized by the clip that opens the film, featuring you and Biggie performing at The Country Club in 1993, these two legends in the making. Can you talk about how you decided to open with that clip?

That scene is what we really loved about Ralph McDaniels. Not only did he play the videos, he played behind-the-scenes [clips], he played you the club, showing the real sides of the artist. That era when Biggie was alive and we were just starting out, it was a turn of the era, a changing of the guard. It showed our humble beginnings at The Country Club where a lot of things went down for hip-hop. To start with that footage, it’s like, “Hello, I’m the director, and I’m involved with the story and invested with the story that I’m going to give you me. And I’m going to show you the beginning of how Ralph filmed me.”

That’s what made him so great because he didn’t just play the videos, he showed the other side of what was going on. There was no other place to see artists or concerts on television, except for on Video Music Box. It shows you how tied he was to the streets and the younger generation that was coming up. No one was too big or too small. That’s why we call him Uncle Ralph. He treated everyone the same, and that footage shows that.

The doc is laced with interviews with so many stars and notable names, Jay-Z, Roxanne Shanté, Wu-Tang, even Wendy Williams. Was there a most memorable moment for you out of sitting down with any of your subjects?

I guess Roxanne Shanté. She’s from Queensbridge where I am from. She was among the first female rappers, along with Dimples D., who was really ahead of her time. I remember watching her video that Ralph McDaniels shot for Video Music Box saying, “Wow, she’s making it. She’s making it.” She’s come so far and she’s stuck to her roots as such a pioneer. Just watching her talk [for the documentary] was everything.

There were some surprise guests too, with Mike Tyson, Willie Geist and Congressman Hakeem Jeffries. Why did you decide to interview those guys?

I mean, it’s New York City. New York City is the beautiful melting pot of Greek, Italian, Asian, Indian, Blacks, Latinos, Puerto Ricans, everyone. It wasn’t just hip-hop Ralph was playing. It was artists from overseas — everyone. Everyone who found out about this public access channel that Ralph paid for out of his own pocket to air these videos, they watched it and everyone helped the music rise. It was more than a hip-hop fan base; it was people from all walks of life. So it was important that people know that, and that’s why I wanted them in there.

One of the things that separated what Ralph was doing was that he didn’t just play videos, he showed a full 360-degree look at life in New York, from the music to the clubs to the nightlife, and he also broached tough conversations about gun violence, drugs and other issues. How did those social conversations impact you?

They impacted me because it showed that Ralph cared to not just pimp the game by getting the kids watching these videos, but he knew that he had our eyes and hearts. He cared about us kids and he cared about the city of New York, which was going through a lot. He was responsible. It was the right thing to do. It was because he was a part of the community and he cared to nurture the community, and he used his platform to do that. That’s what made him such a great guy.

The documentary mentions the competition, like Yo! MTV Raps and Rap City on BET, and it mentions how then-New York Mayor Rudy Giuliani unloaded the assets of the city including WNYC, which aired Video Music Box. That contributed to a huge loss in viewership. But you don’t villainize any of this in the documentary. Why?

I mean, those things are not important. Those are things that happened in New York. It’s a part of the history and so it’s in there, but there’s no need to go deep into it because the story’s more about the good that came out of it, and the impact it had. All the other things that got in the way of it just make this story even better, but there was no need to drag out the things that happened in a city like New York City. Laws change, politics change, rules change. That just happens. It’s what it is. Ralph is a mature dude, Ralph is Uncle Ralph. He’s wise and he’s moving from a place of wisdom. The story is about art, and that’s the most important story.

Toward the end of the film, there’s a line about how simple times were back then, especially for artists like yourself. You would make music, put it out, film a music video, perform live and that would be it. Is it better today now that you have many more platforms to connect with your audience, or was it better back then?

It’s great in each time period. That day was a great time. Today is a great time. That’s what’s cool about life. In history, things change, things evolve and life moves in different directions. Of course, there weren’t as many rap artists back then because it was just catching on. Now there are tons of them, but it’s because it caught on so much. This phenomenon’s just become beyond what anybody thought it could be. It’s so huge globally. That was the wintertime. This is the summertime of hip-hop.

Let’s talk about that director credit: Directed by Nasir “Nas” Jones. Is this the first of many to come?

I’m looking forward to doing more. I’m keeping myself busy with films more. So, I think so, yeah, but I don’t want to sound like I’m out here trying to direct everything. I want to do projects that mean something to me. When they work out, they work out. Thank God this one did.

What kind of director are you?

I’m just a realist. I go with what’s real.

I wanted to ask about the Grammys. You won your first earlier this year for rap album of the year and you’re nominated again in the same category alongside Drake, Kanye West, J. Cole, and Tyler, the Creator. What does the back-to-back recognition mean?

I feel great, man. All things happen when they’re going to happen, but the film is where my head’s at right now. My head’s on the film and Ralph McDaniels.

You didn’t make it to the Grammys earlier this year. Will you go to this show?

I’m going to the premiere for Ralph McDaniels and [Video Music Box].

OK, back to the film. Someone says in the film that Video Music Box remains an underrated piece of hip-hop history. How do you hope your film corrects that?

I hope this fills a piece of a puzzle that’s missing, a piece that maybe people didn’t even know was missing, but they could feel that something was. Video Music Box is where it all started, and it’s a great piece of the puzzle. 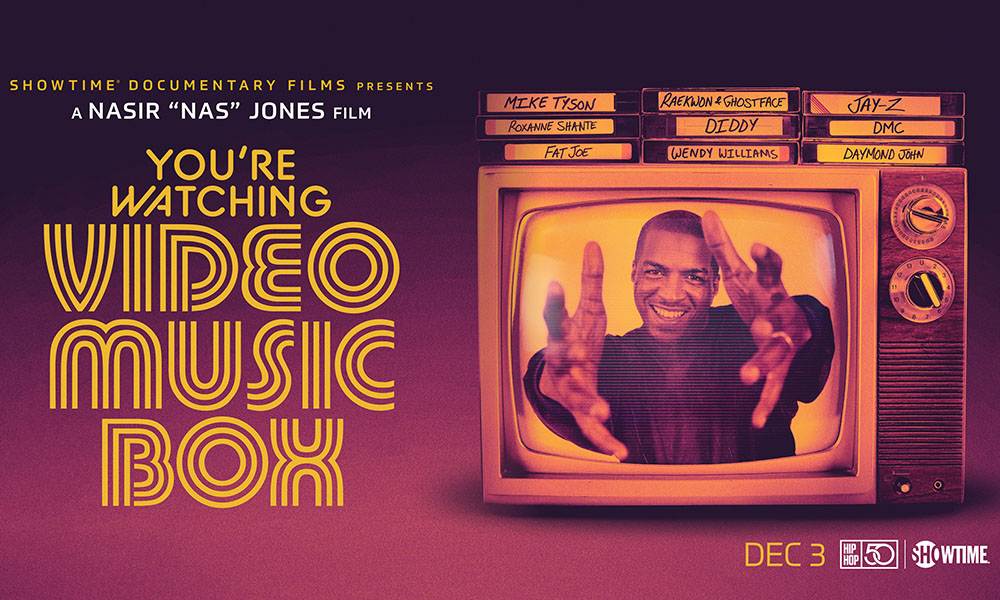