For the first time since doing a cameo voice role on King of the Hill, Renée Zellweger is on television — but as a sign of how things have changed during the past 18 years, she’s starring in a show designed for the times. ??

“I didn’t really think about the medium as much as the project itself,” she told The Hollywood Reporter of Netflix’s anthology What/If, a social thriller that explores morality. “Good is good. HBO has been making spectacular material for years.”??

And the Mike Kelley-created What/If appealed to the actress, who was nominated for an Oscar for playing a manipulative murderess in Chicago, but more often than not gets cast as more sympathetic characters than Anne Montgomery, whose Indecent Proposal-esque proposition to a young San Francisco couple (Jane Levy and The Glee Project grad Blake Jenner) sets a whole series of dramatic events into play.

“One of the things that everyone in the world loves about Renee is how open and vulnerable she is for the audience, and she can be every person. Her lack of artifice, and her openness is really her signature. And so, to ask her to just go in a completely opposite direction where this is a very carefully crafted woman,” said Kelley, whose credits include ABC’s twisty drama Revenge. ?

What/If is Kelley’s tribute to the heightened “morality play” thrillers from the late ’80s and early ’90s like Proposal, The Hand That Rocks the Cradle and Fatal Attraction, with the additional inspiration of Mrs. Robinson from The Graduate.

“Mrs. Robinson was a really, really, pretty telling prototype,” Zellweger said. “So, we went from there and of course he had suggested, well, we’ll subvert the trajectory of that character. Let’s just say you take all that power and self-loathing and instead of channeling it into alcoholism. What if she did something proactive? What if, say, she builds an empire?”??

Zellweger’s aforementioned openness, as an actor, ended up being a tool that she used to build the character. “It’s only on when it serves her. Warmth is a tool. And she’s very contained and calculated, meticulously to how she presents herself,” she said. “It’s funny to consider that she’s so completely contained and tightly wound because [it’s] a part of her or a necessity for perfection. It was pretty clear to me who she is through my conversations with Mike and who’s he wanting her to be. Her sense of entitlement is extraordinary. Her ambition and that everything is a tool including her sexuality, which she leads with unapologetically so uses to manipulate. So those things were necessary to tap into. And what does that look like? Well she takes up a lot of room but at the same time she has to be groomed.”??

Getting to play a villain in a piece with melodramatic roots was fun for her as well — especially when it came to everyone’s favorite classic sort of shot: Staring ominously out a window with a glass of wine. Zellweger laughed when asked about what those scenes take: “Yeah I would say it has to fit somehow. There has to be some kind of truth of it. And if it’s not truth for the character, it has to be truth for the project as the whole totality. It has to sustain,” she said. ??

Central to the premise of What/If is that the first season is a complete story, and follow-up seasons would, anthology-style, tell very different narratives. It’s a reflection of Kelley’s experience creating the ABC drama Revenge, the Count of Monte Cristo-inspired Hamptons soap opera, which had a four-season run, despite Kelley leaving the show after season two.

“When I talked to ABC about the show, I told them that it needed to be a finite adventure, and I thought there were about 60 episodes, and I could do maybe five seasons of 12 episodes each, and they were like, ‘Yeah, yeah, whatever,’ and then it took off,” Kelley recalled. “Internationally, it became a big thing, and that was really exciting, but by the end of season one, we had done 22 episodes, and coming up on the end of season two, we were at 44 episodes. I was like, ‘So, guys. I was serious. I’ve got 16 more episodes left, so here’s how we can do it.’ I said, ‘I can stretch it into 12 each, and we can do two seasons,’ and that just wasn’t their business model. And they said, ‘Well, we see this as something that can go on, and on, and on as a soap opera that gets more chaotic, and brings in new characters.’ I said, ‘That’s not the show that I wanted to tell, but it’s yours so go ahead and find somebody that can do that for you.’ I took no pleasure in leaving the show at all. It broke my heart a little bit, and truth be told, I never watched an episode after I left.”??

So when it came to What/If, Kelley deliberately designed the season to be a 10-hour film. “Each season of What/If for me is going to follow that path,” he said. “It’s very liberating and really exciting. I was glad I got that chance on Revenge to discover how I really want to tell stories. Netflix gave me the opportunity to do it.”??

From Kelley’s perspective, invoking these references (Indecent Proposal even gets a direct nod in the first episode) gave him as a creator the chance to build a heightened world, while also hoping to deliver a fun tone. Philip Noyce, who directed the Revenge pilot as well as 1993’s Sliver and 1989’s Dead Calm, helmed the first two episodes in order to capture that feeling. ?? 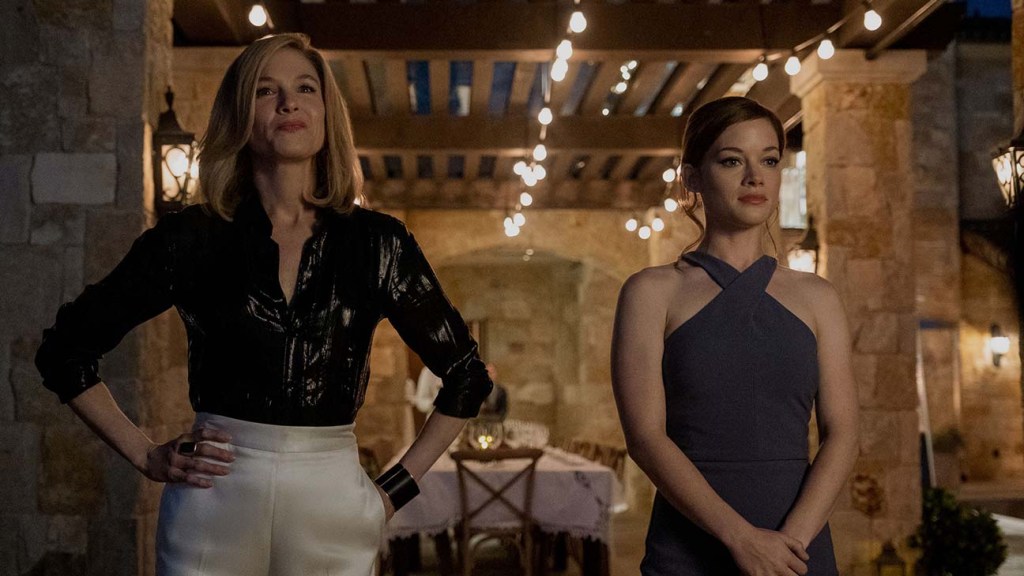 “The tone of this was meant to be heightened, and fun, and it exists in our world, but there’s something just a little bit off of it because it is a morality play, and that’s as intended,” he said.??

As for the future, he said, “I’m going to try to choose stories to tell, and I’ve already got something in my mind, but the stories that are rooted in socially consequential source material. When Indecent Proposal came out, it shook the room, and certainly Fatal Attraction did. I really like revisiting some of the things that had a cultural moment…. What/If, for me, is a reaction to where we are as a world really — what’s the line? What are the things that we are not willing to do in order to get what we want? I think from the way we treat each other to, obviously, our politics, that’s getting blurrier and blurrier. I wanted to do a show that’s super fun, and also asking that question where do you draw the line?”??

Unlike other anthology series, like American Crime or American Horror Story, Kelley’s focus isn’t on building a recurring ensemble. “Every morality play will be different, and we welcome new blood into the chum. I would use this cast again, and again, and again if our schedules line up, but the idea now is to find the right story, and find the right characters,” he said. “Anybody from this cast that’s available, and wants to work on this show again, I would love to do it. I would like to say that we all feel the same way, but you’d have to ask Renee, and Jane, and Blake.”??

If there is a second season of What/If, Kelley said, he knows what thriller he’d like to use as the inspiration, but declined to say which it would be. “Just in case I can’t pull it off,” he said. “I reserve the right to change my mind.” ??

Zellweger, meanwhile, is open to returning to television again. “The business model has changed. The paradox has changed so much. In the last couple decades, I feel like a lot of the films that I made in my career couldn’t be made today, unless it was on television,” the actress, who won an Oscar for her role in Cold Mountain, said.

What/If is now streaming on Netflix.