Last seen playing the murderous “synth” Hester in the second season of sci-fi drama Humans, rising British star Sonya Cassidy has swapped a dark, near-future U.K. for something slightly less robotic and a little more sun-kissed and SoCal in Lodge 49.

Cynical and pragmatic — the “yin to his yang,” says Cassidy — Liz works shifts in a cheesy Hooters-esque Irish sports bar called Shamroxx in order to support them financially, keeping the two afloat as her brother unwittingly stumbles across a bizarre fraternal lodge that offers him just the sort of path he needs.

Speaking to The Hollywood Reporter, Cassidy discusses being the only Brit on the Lodge 49 set, why the final audition took her back to her taekwondo exams and her “little” Instagram project aimed at highlighting and celebrating women working behind the camera.

As your first major role in a U.S. production, how did Lodge 49 come about?

Like any role, I auditioned for it. But there were three rounds, and the third round was a test — they flew me out to L.A., which was unlike any other audition I’ve experienced here. Everyone was lovely, but I really wanted this gig. Usually there’s so much out of my control — I just go in and play the part, and they make a decision. But it made me feel a little like I did when I was taking my taekwondo gradings as a kid, which was so terrifying because you’re in a room and there’s just this table of the dons of British taekwondo and everything’s pin-drop quiet and your parents are in the back watching. My parents weren’t in the back watching when I auditioned. But they were in spirit. It was bizarre and took me back to being 14 again.

I think it’s pretty good! I did a lot of American plays when I graduated. So an American accent comes pretty easily. And I got the SoCal seal of approval. I love accents.

How was it being the only Brit on set?

It’s sort of bizarre in a sense, because I realized being over in the States that I’d never felt more British in my life, really. When I’m around Europe traveling or working, I don’t feel British, I feel European, but there I said “blimey” at one point and “morning chaps,” and it was hilarious. 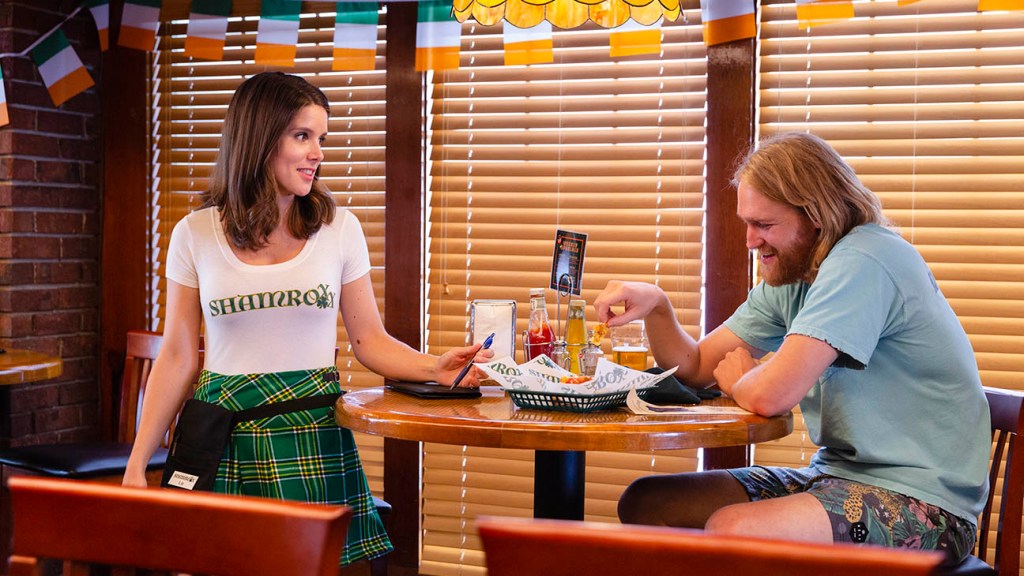 Have you grasped the U.S. lingo?

Well, there were certain phrases that I realized would baffle Americans and I needed to rein in. Describing something as like “chalk and cheese,” they’d be like, “What are you talking about?” And I’d talk about “pottering around” — just walking everywhere. In L.A. you don’t walk. But in a weird way I found myself sort of hanging on proudly onto words and phrases in a really feeble way — I’m on the pavement, these are my trousers, you know? This is truly the special relationship, the sharing of lingo.

Following Lodge 49, is the U.S. the direction for you now?

Yeah, absolutely. London is home, but I had a fantastic time and would happily continue. I spent a lot of time in L.A. and Atlanta, which I’d love to go back to. I feel now, having spent a chunk of time there, I’ve got it under my skin, it feels less sprawling and bewildering. The more time you go beyond that, you can go behind the scenes of that. I loved discovering that. Somewhere I’d love to do more theater, but I think — right now — I’m thoroughly enjoying the experience.

Is theater where it all started?

Yeah, as an extra helping my mum, who was involved in a local youth theater. I just loved it, despite being very conscientious at school and working hard and everything — acting and drama and bringing those worlds to life was something that I relished.

On the side, you are running the Ms Filmmaker Instagram account, showcasing women working behind the camera. How did this start?

I will confess, I’m no social media person. I’m a bit of a dinosaur. But a lot of people were saying that I should be on Instagram. Aside from my job, I’m a bit of an introvert. The idea of documenting my life and putting it out there is a bit odd for me. But it was a combination of things — when I was filming Humans I was working on another show at the same time. On Humans we had a wonderful female presence, in front of and behind the camera, but on this other job, aside from me and the other actress there was just one woman, and I thought, “How is that happening?” So I spoke to friends of mine at work, the camera department in particular and went online and read studies from the director’s guild. And I noticed how, as much as there was rightly a conversation about inequality in front of the camera, this wasn’t really being had about people behind the lens.

I’m no Annie Leibovitz. Ms Filmmaker is more for me to be a vehicle for showing what’s there. When I’m on a job onscreen working with women in crew, in any aspect of crew, I will take a picture of them and post it. I really admire Geena Davis’ philosophy of, “If she can see it, she can be it.” She’s been doing this for years, but it’s only really in the last 18 months that it’s being talked about and obviously there are many other conversations being talked about. But at the time it wasn’t, and I just wanted to honor that. And also to celebrate it, for it to be a positive shedding, in a sense. It’s a small, little project. I’ve got so few followers, but it’s something that I would love to keep ticking along.

Have you seen it change since you’ve been running Ms Filmmaker?

Yes, absolutely. We had a great female presence on Lodge that I’m very excited to show people. But unusually, and wonderfully, I’m not supposed to post on social media. Which was music to my ears, but I also have lots of lovely women that kindly let me photograph them when I was filming. The ladies of Lodge 49 will be heading to Ms Filmmaker at some point! But yes, I have seen that change. What I have also enjoyed is that, male or female, it’s nice to show just how much work goes on behind the scenes. There’s a whole army of people working so hard and we are but cogs in that machine. That was always something instilled in us at drama school and is also something part of my upbringing, that it’s not just about us actors, it’s about every single person contributing to this team effort.