[This story contains spoilers for “Chapter Fifty-Eight: In Memoriam,” the season four premiere of Riverdale on The CW.]

The fourth season premiere of one of TV’s craziest shows might be its most grounded — for the worst of reasons.

“This was not an episode we ever wanted to make,” Riverdale executive producer Roberto Aguirre-Sacasa told reporters about “Chapter Fifty-Eight: In Memoriam,” which pays tribute to Luke Perry.

Perry, who had played Fred, Archie’s (KJ Apa) loving father since the beginning of the series, died in March after suffering a stroke. While the show was still in production at that point, Aguirre-Sacasa said that he and the staff made the decision to wait on addressing it.

“We didn’t want to rush it, we didn’t want to sandwich it in in between all the other plot lines,” he said. “And we just wanted to take our time and think about it. We briefly thought that maybe something would happen at the end of the season that would signal it, and that felt a little cheap. So we thought, let’s just hold it.”

Thus, season four opens with the Riverdale gang making plans to celebrate the Fourth of July, until Archie gets a fateful phone call informing him that Fred has been killed in a car accident. The rest of the episode is devoted to Archie and his friends learning the details of what happened and bringing Fred’s body back home, as Archie begins the process of mourning his father. 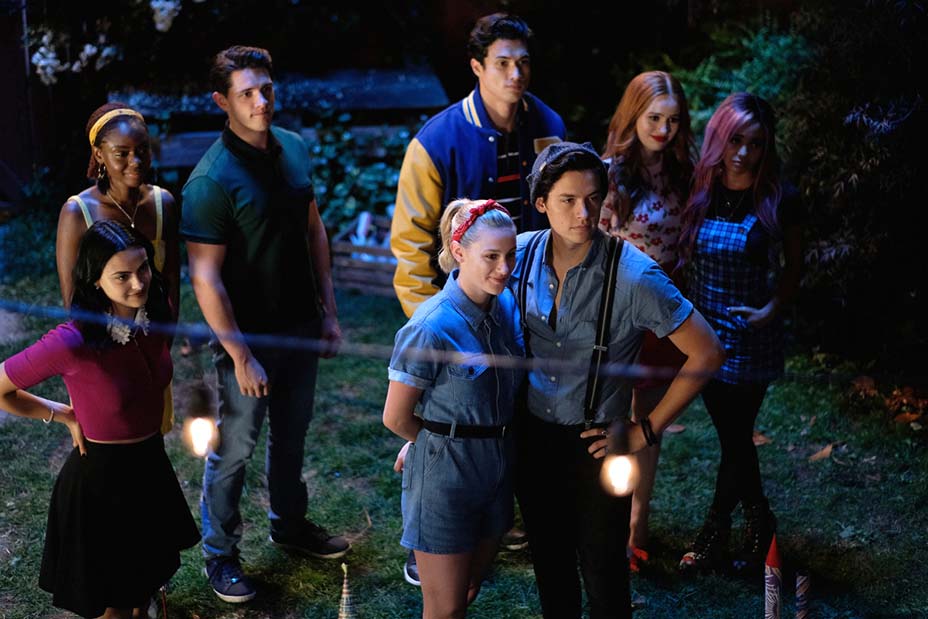 It’s a relatively simple installment, which Aguirre-Sacasa said was by design, citing other tribute stories like the Friday Night Lights episode “The Son” as inspiration. “We talked about putting in some other storylines, but as we were working on it, we kept focusing it on our characters, and and focusing it truly on Archie. … We wanted to just tell a very grounded and truthful story.”

Instead of serial killers or other signature Riverdale drama, Fred is killed after stopping to help a stranger on the side of the road. While he helps fix her blown tire, a speeding car comes upon them and Fred pushes the woman out of the way, saving her life but sacrificing his.

“Very early on, we landed on the idea that Fred should have a heroic death that would be impactful for Archie,” Aguirre-Sacasa said. “We really said that this episode really isn’t going to launch any huge stories for the season. It was really going to be focused on that.”

Playing the woman Fred saves, whom Archie meets later, is Perry’s Beverly Hillls, 90210 co-star Shannen Doherty, whose casting was announced this summer, and adds significant emotional weight to the episode. “Over the seasons, Luke, and I had talked a lot about trying to get Shannon on the show, but the timing never worked out or the part was never quite right,” Aguirre-Sacasa said.

However, when the Riverdale team asked her to be a part of the tribute to Perry, she was on board. “We thought it would be nice if it was someone he really he cared for in real life, and he cared so deeply about Shannon. That’s how we got to that.”

Perry’s family was involved as much as possible with the episode, reading the script and providing real photos from Perry’s younger life, which are featured onscreen. “I love seeing him in his baseball uniform,” Aguirre-Sacasa said. 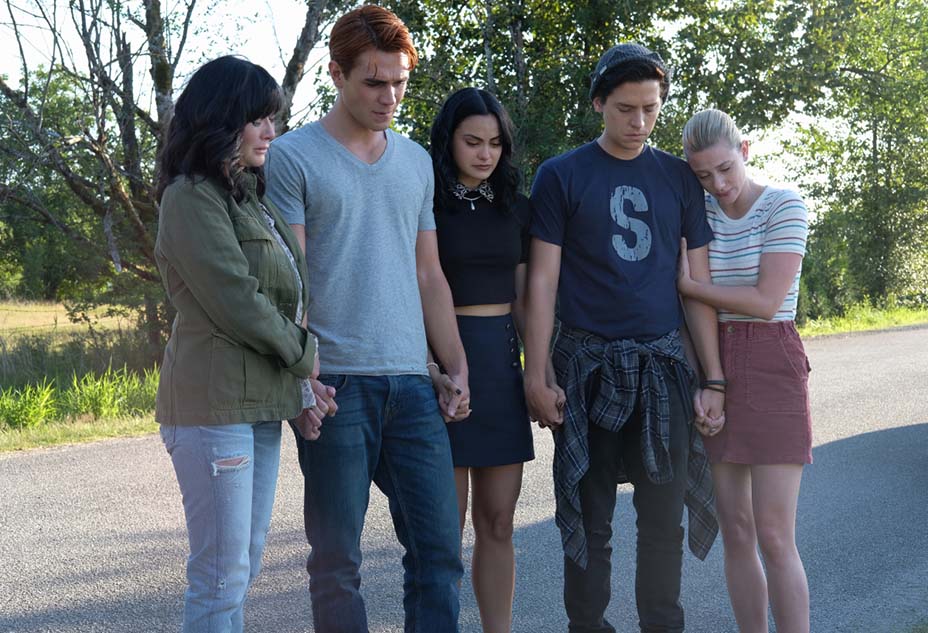 Going forward, Fred’s death will have a major impact on the show, Aguirre-Sacasa noted, because “he’s always kind of been our moral center. You know, we frequently describe him as the one good parent in Riverdale, and the best influence on Archie. In a crime-ridden world, which is what Riverdale is, he’s got dignity and honor and really good values.” As the season continues, Archie will try to honor that example, because “he’s always wanted to follow in Fred’s footsteps, but now feels that burden even more so.”

Perry died before the Riverdale team had begun doing serious planning for season four, which meant that nearly from the beginning Fred’s death was a part of the development process that had a larger impact on the show. “It did suggest a path for Archie, which is about growing up a little more quickly than he would have and and giving senior year this almost melancholy feel,” said Aguirre-Sacasa.

While the season premiere is the show at its most grounded, Riverdale will soon begin dealing with some of its wilder plot lines, with the second episode jumping ahead two months. The writers, however, made a decision to be judicious the show’s more outlandish elements. 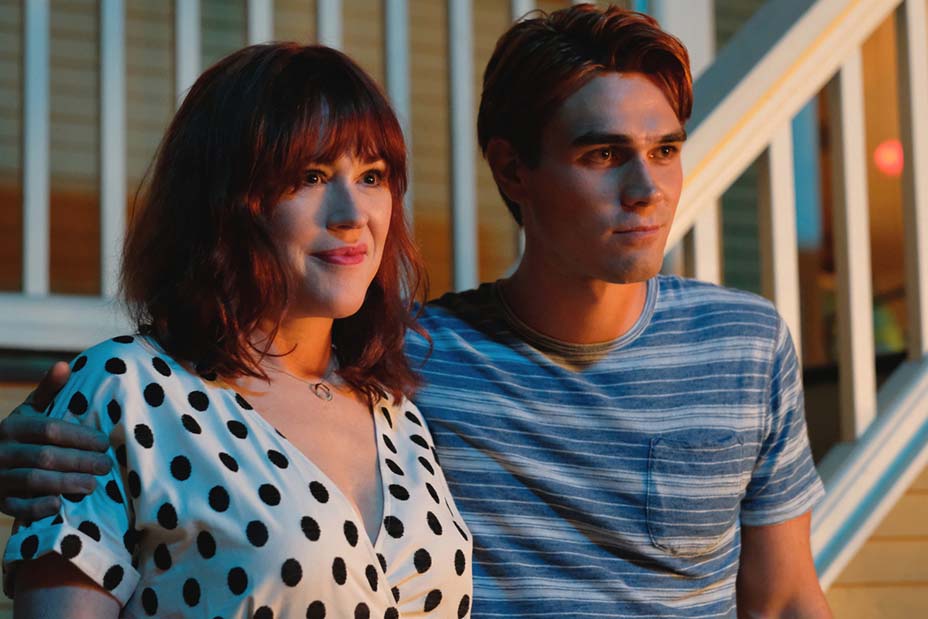 “The truth is, something like [his father’s death], Archie will be wrestling with it for the rest of his life, other characters less so. One of the things that’s been interesting is, you know, when a tragedy like that happens, everyone grieves and then people move on at different points. But for the person who’s at the core of it, they live with it every day. So we don’t pretend it didn’t happen. It’s still very much permeating Archie’s story. But we did want to start episode two on a little bit of a lighter note, and get back into the high school world.”

Aguirre-Sacasa said he’s excited that recurring castmember Molly Ringwald (who plays Archie’s mother, Mary) will continue to appear this season. “Mary moves back to Riverdale, and she’s moving from Chicago not quite aware of what a rough town Riverdale is, so we’re having some fun with that,” he said. “We just did an episode I’m really proud of, which is a Thanksgiving episode, that reminds us that this is Archie’s first Thanksgiving without his father. It’s Mary and Archie shoulder-to-shoulder, and there’s the typical craziness that happens. But there’s a real, true emotional core there as well.”

On both the show and in real life, Perry will be remembered: While the experience of making “In Memoriam,” Aguirre-Sacasa said, was hard for the cast and crew, he also felt it was cathartic, and hopes that it’s also cathartic “for people who have an emotional tie to to Luke.”

“I think you see everyone’s love for Luke in the episode,” he said. “We’re very proud of it.”

Riverdale airs Wednesdays at 8 p.m. ET/PT on The CW.

'Riverdale': Luke Perry's Final Appearance Is a Reminder of What the Show Loses Without Him