Robert De Niro may have appeared on Friday’s installment of CBS’ The Late Show With Stephen Colbert in order to discuss the upcoming Tribeca Film Festival, but that didn’t prevent the actor from taking a few jabs at President Donald Trump and addressing the Mueller report.

De Niro has commonly appeared on NBC’s Saturday Night Live to give impressions of the special counsel; the actor last played Mueller on SNL‘s March 30 episode and appeared in several cold opens last year. In a recent Hollywood Reporter In Studio interview, De Niro said that the appearances on SNL feel like his “civic duty.”

When host Stephen Colbert asked why De Niro felt it was his “civic duty,” he said there was no explanation other than what he said. “I have no other way to say it. … It’s my civic obligation to play Mueller.” Countered Colbert, “I doubt Mueller does as good of a Mueller as you do.”

Because the actor filmed his appearance on Tuesday, prior to the Mueller report being released on Thursday, the actor could only express his hopes for what the report results would bring. “I’m hoping that it goes further. I don’t know what will happen. I don’t know if this is actually possible in reality where I can handcuff him and take him away in an orange jumpsuit,” the actor quipped of Trump.

De Niro has notoriously criticized Trump in public events and interviews, with the Oscar winner even referring to the president as “our lowlife-in-chief.” In response to De Niro’s jabs, Trump has called him “a very low IQ individual” on Twitter, among other insults.

Aware of his distaste for the president, Colbert asked De Niro why he couldn’t just give Trump a chance. De Niro said he tried initially.

“That’s what I said right after he was elected. Give him a chance. I give everybody the benefit of the doubt. This guy has proven himself to be a total loser,” he explained.

De Niro also discussed how he will be interviewing Martin Scorsese during this year’s Tribeca Film Festival and joked how “easy” it will be. “I ask him a question, give him the mic, get up, go have a coffee around the corner, give him 15, 20 minutes, come back … it’s easy,” the actor joked.

Set to star in Scorsese’s upcoming The Irishman, De Niro discussed why audiences appeal to the gangster genre — only to take a few more jabs at Trump.

“People like the outlaw type thing, except we have a wannabe gangster in the White House now,” De Niro said, also calling the president a “dumbbell.”

“Even gangsters have morals and they have ethics,” he continued. “They have a code, and you know when you give somebody your word, it’s your word because it’s all you have is your word. … This guy, he doesn’t even know what that means.”

Straying from the political talk, Colbert poked fun at the actor for always displaying a tough demeanor during his late-night appearances. “You’re not as enthusiastic to be on a talk show as we are all excited to have you here,” Colbert said, to which De Niro explained that he just likes to keep things “short, sweet and to the point.”

“Sometimes you don’t know how you’re going to come off or whatever. I just want to be straight and honest and that’s all,” the actor said.

To embrace the “awkward aspects of an interview,” Colbert told the actor that they should remain silent for a minute while eating hot fudge sundaes. During their minute of silence, Colbert jokingly put whipped cream in the actor’s mouth. “You know I’m trying to lose some weight,” De Niro mentioned. 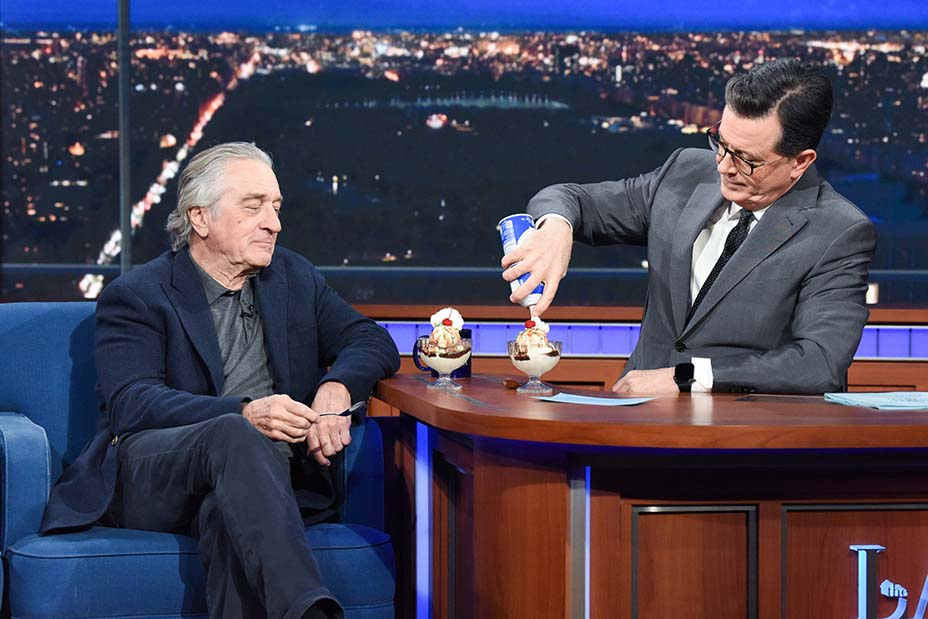 To continue learning about the actor using minimal words, Colbert then played a game of rapid-fire questions which prompted the actor to give some comical answers.

When Colbert asked who the “greatest actor” is that De Niro ever worked with, the actor simply responded: “Myself.” De Niro also shared that Marlon Brando was one of the best actors he’s worked with, The Irishman is his favorite film he’s done and he’s a fan of Alec Baldwin’s impressions of him.