Skip to main content
March 18, 2019 10:15am
Logo text
Roswell, New Mexico is billed as the second adaptation of Melinda Metz’s book series, rather than a remake of the 1999 show Roswell, which aired on The WB and UPN for three seasons. Accordingly, the new show has forged its own narrative path in its eight episodes to date, introducing new relationships, timely political commentary and an original murder mystery.
The season’s ninth episode, airing Tuesday on The CW, will feature the show’s biggest nod to its predecessor yet, as original series star Shiri Appleby returns to the fold as director.
Appleby first threw her hat in the ring for the job last summer, while doing press for the fourth and final season of her Lifetime drama UnReal. “Reporters were always asking me what I thought of the reboot, and i just said ‘I can’t wait to direct it!’” she tells The Hollywood Reporter. “I thought that was a good way of putting it out there, and letting them know I’d be happy to come join the team.”
When the show was assembling its director list, showrunner Carina Adly MacKenzie reached out to take Appleby up on the offer. The episode is the first of several directing gigs Appleby now has lined up; her upcoming slate includes episodes of Pretty Little Liars: The Perfectionists, Dynasty and Hulu’s Light as a Feather. “It feels like doors are wide open in a way that even six or seven years ago, they were not,” Appleby says of her burgeoning career behind the camera.
Ahead of Tuesday’s episode, Appleby discusses her experience returning to the Roswell fold, comparisons between the two shows and how the landscape has changed for female directors.
Roswell, New Mexico is a lot more political than Roswell was, and uses aliens as a metaphor to talk about immigration. How do you think the two shows compare?
We really were a show that was about being in high school, and we were saying that being an alien was what it was like growing up; the feeling that nobody really fits in and everyone’s uncomfortable in their own skin. I thought at the time that was a wonderful way of tackling the angst of growing up. In today’s world, we’re dealing with social issues and hot topics that are really political, which I think the younger generation are much more consumed with now. I don’t know if the youth of 20 years ago were focused on [politics] in the way that they are today. I’m really proud of how the show’s been reimagined and updated for today’s audience.
Did Carina want you to direct 109 specifically, or was that just how the schedule worked out?
Oh yeah, there’s something specific that happens in the story of this episode that she wanted me to direct. It was [shooting] over Halloween and I have two little kids, so I asked “Is there any way I could do a different episode?” And she was like, “We really, story-wise, want you to do this one.” And once I read the script I understood why, and was so grateful that they gave me this episode.
Do you recall there being a conversation about the original show’s decision to change your character’s name from Liz Ortecho to Liz Parker?
No, it wasn’t even a conversation, or at least it never came to me. But now that I’m producing and directing, I realize that by the time things get to the actors, so many decisions have been made and the train is already moving. I would assume that Jason Katims and David Nutter and all of these wonderful producers that put our show together, they had those conversations. By the time I was cast, I was a 19-year-old girl straight out of college, so that wasn’t a conversation that was coming all the way down to me. 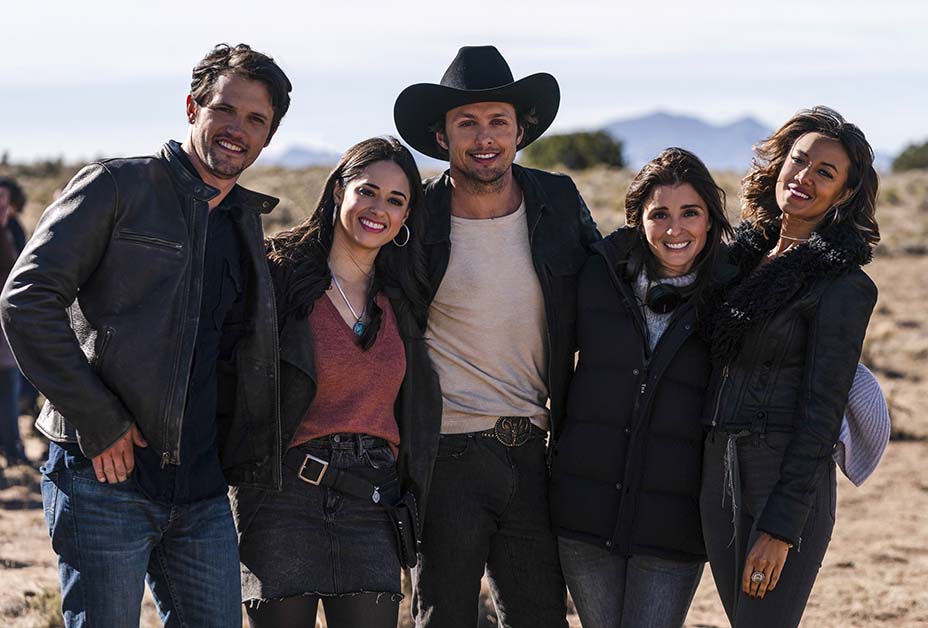 Female directors are still a minority on TV, but the statistics have improved over the last few years. How have you experienced that shift?
It feels like doors are wide open in a way that even six or seven years ago, when I was trying to really get started [as a director], they were not. I’ve grown up in front of the camera, and have really learned from incredible directors like David Nutter and David Semel, and to finally see so many women doing it is incredible. We did 61 episodes of Roswell, and on our very last episode, we had a female director [Allison Liddi-Brown], and that was it. I never grew up seeing women direct, and I didn’t really know that was something that was available to me. When I came across Liz Allen on the set of Life Unexpected, that was really kind of groundbreaking for me, and then when I worked with Uta Briesewitz on UnReal, she took me aside and said “Shiri, you should be directing.” I was like “I’m really nervous, I don’t know all of the lens sizes”, and she was like, “You don’t need to know that. That’s the DP’s job.” To have all of these women who were doing it call me out and say, “You could do this too, you have all of the information, you know how to tell a story, you know where you want to put the camera” has been really wonderful. There’s so many women that are so supportive of other women getting started. Even if all the women who want to do it get an opportunity, we’re still not going to be 50 percent, so let’s let everybody do it!
So out of 61 episodes of the original Roswell, only one had a female director?
Yes, and the fact that the woman was on the last one — the show was done! There was no real risk. Roswell and Pretty Little Liars: The Perfectionists are both in their first season, so in giving me episodes, they’re taking a risk. In the first year of a show, they really want to put on all of these directors that have so much experience, and can guarantee that these shows are going to be a hit. It’s Carina MacKenzie and Marlene King, two female showrunners, who are giving me these opportunities, and they’ve been nothing but incredibly supportive. It feels like perspectives change [with a female director], and you get to have different conversations on set. Like, if a guy turns an actress around to grab her and kiss her [in a scene], is that still okay? If the person directing is a women, they can say, “Yeah, that works for me, that was pretty sexy,” but if it’s a man, maybe he’s saying “Mmm, I don’t know if that’s okay.”
You’re directing Jeanine Mason in an alternate version of a role you played for three years. What was that dynamic like?
She’s an excellent actress and a wonderful woman, so to have anybody stepping into that role and putting that waitress uniform on, I’m incredibly proud that Jeanine’s the one that’s doing it. There were a lot of times where we’d talk about ‘My Liz and your Liz,’ like when my Liz would ask Max to dance, I would have a lot of nerves and insecurities because my Liz was 16 years old. Jeanine’s Liz is in her mid-20s and has a really great sense of who she is, so she handles Max very differently. It was great to have a hand in shaping this Liz’s story.
This interview has been edited and condensed for clarity.