The first three episodes of Runaways have premiered on Hulu, with seven installments still remaining before the end of season one. That’s seven more opportunities for show creators Josh Schwartz and Stephanie Savage to include a shoutout to the way Brian K. Vaughan and Adrian Alphona launched their comic book series back in 2003, with protagonist Alex Wilder (Rhenzy Feliz) playing a Marvel M.M.O.R.P.G. (which stands for massively multi-player … ah, forget it) as a Captain America avatar, an early indication that this isn’t your ordinary superhero adventure.

Despite existing in the same shared Marvel Cinematic Universe as Chris Evans’ Cap, the live-action adaptation of Runaways begins on a very different and much darker note than the first impression from the comics: with a young woman named Destiny (Nicole Wolf) on the run, a notion that lives up to the show’s title in its own way. It’s not immediately clear why Destiny has hit the road, though it quickly becomes clear she’s in need of some help. That help arrives in the form of two women representing the Church of Gibborim, who promise a few things: a hot meal, a shower, a good night of sleep and the guarantee that they are definitely not a cult.

Not a cult? Funny. Tell that to Destiny one year removed from this moment, as she’s being sacrificed by a group of men and women wearing red robes, stripped naked and submerged into an otherworldly coffin of sorts.

Destiny’s destiny, as it were, is at the heart of the final moments of Runaways, a less decisively fatal but still deeply harrowing version of the same way Vaughan and Alphona’s first issue of Runaways ended so many years ago: six teens watching their mothers and fathers sacrifice an innocent person in a ritualistic manner, as clear a sign as any that they really are among the worst people on the planet. The Pride, as these parents are called, share a goal that their children do not yet understand, if they’re ever going to understand. For now, it’s enough of an obvious act of villainy that Alex and his peers are sure of one thing: whatever just happened in the basement of the Wilder residence, it’s very bad, very weird and very much in need of further investigation.

Other observations from “Reunion,” beyond the chilling opening and conclusion:

• Unlike the Runaways comics, the TV adaptation begins with the six teenagers at odds due to the combined forces of a shared tragedy and the passage of time. It’s clear that the tragedy involves Nico Minoru (Lyrica Okano), a significant update from the comics, and one that will provide narrative fuel for the episodes ahead.

• Another significant update: Molly Hernandez (Allegra Acosta), formerly known as Molly Hayes in the comics. The show’s version of Molly is older than her comic book counterpart, an adopted member of the Yorkes family (meaning she’s the sister of Ariela Barer’s Gert), and definitely not a mutant, as the X-Men rights belong at Fox. Still, there’s clearly some sort of powerful development brewing within Molly, even if it’s not fully clear just yet.

• For comic book fans keeping a close eye on Alex Wilder, the brilliant youth does have his hands on a video game controller (albeit not a Marvel game) in his first scene of the premiere — and he has his hand on another important object toward the end of the episode, too, accidentally opening the way for his friends to witness their parents’ evildoing firsthand. Put a pin in that one.

• The Church of Gibborim is a new wrinkle from the comics to the show, as is the bed-ridden man wearing some kind of life support mask — a dead-ringer for Psycho Mantis, even if it’s not the right universe.

• As for the Pride’s plans moving forward? The full extent of their shared goals will make themselves known in the episodes ahead, but for now, the first steps toward knowing these men and women can be taken in the very next episode. What are you waiting for? Check out the second hour of Runaways, then come back this way for a closer look at the Pride.

First, for anyone who wants to see the first image of the Runaways comic book for themselves… 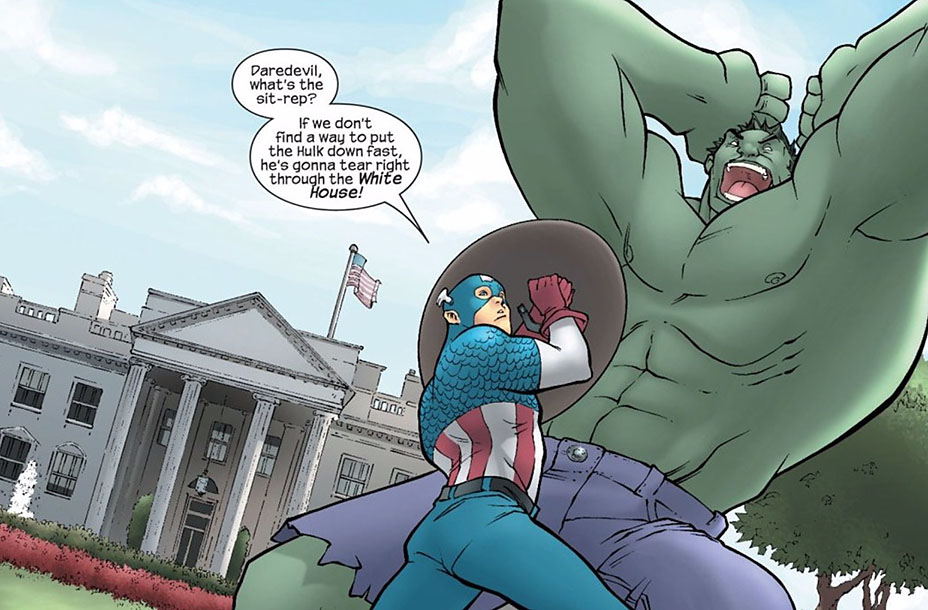 … there’s plenty more Adrian Alphona goodness awaiting you in the pages of the Runaways source material, among the most kinetic Marvel comics of the past two decades. Hard to imagine better reading material to go along with your new Marvel series of choice.

The first three episodes of Marvel’s Runaways are currently streaming on Hulu, with new episodes arriving on Tuesdays.