[Warning: This story contains spoilers from the first three episodes of Hulu’s Runaways.]

Something happens when the parents at the heart of the new Marvel series Runaways, currently streaming the first three episodes of its freshman season on Hulu, put on their super-villain attire: they become covered in blood, or at least the same crimson hue so evocative of the ritualistic sacrifices they make as members of the shadow organization known as the Pride.

“Putting on those red robes is very symbolic,” Angel Parker, who plays Catherine Wilder, tells The Hollywood Reporter about the sensation involved with donning the Pride uniform. “We know what we’re shooting that day. We know what we’re doing. They’re beautiful. They’re heavy. They’re also dyed a deep red, so it kind of tints your skin afterwards — so when we’re done, we literally have blood on our hands. We’re literally covered in red.”

There’s a heaviness involved with tapping into this dark side of the Runaways cast, according to the 10 men and women responsible with bringing the Pride to life. The hook of Runaways sees six teenagers discovering that their parents are members of some sort of villainous enterprise, sacrificing humans on an annual basis (if not more frequently) for as-yet unrevealed purposes. In the comic books from Brian K. Vaughan and Adrian Alphona on which the new Hulu series is based, the members of the Pride are fairly clear-cut in terms of their villainy. But the show, created by Josh Schwartz and Stephanie Savage (The O.C., Gossip Girl), blurs the line between good and evil when it comes to the parents as forces of antagonism.

“When I first read the book, I was a young man. When I came back to the book more recently, I was a parent,” says Schwartz. “I started wondering about these parent characters, because I have all these new thoughts about life as a parent.”

“It’s definitely in the DNA of the comic book that the parents have a reason for doing what they’re doing,” adds Savage. “They believe they’re acting in the best interests of their kids. In order to bring that to life in season one of the show, we felt we needed to dig deeper into the parents’ relationships with their kids and also their relationships with each other — both as couples and as individuals among the Pride, knowing they have this long history of working on this unspeakable project together, and how it’s complicated their lives and created closeness, but also conflict with each other as a group. It felt like something very interesting we needed to flesh out.”

Speaking with The Hollywood Reporter, here’s how the actors tasked with bringing the Pride to life view their characters’ villainous actions, and how the series treats its central premise of conflict between parents and their children writ large on a Marvel Universe scale.

Ever Carradine (as Janet Stein): “You know the day in your childhood when you wake up and realize your parents aren’t heroes — they’re just people trying to get through the world? On Runaways, it’s that same idea, but on steroids: not only do these kids realize their parents are people, they’re also super-villains.”

Annie Wersching (as Leslie Dean): “I currently have a 4-year-old and a 7-year-old, two little boys. It’s funny, because my little one is totally in this place where he’s asking: ‘Are there bad guys in the world? You’ll protect me from bad guys, right?’ He’s trying to figure it out. Legitimately, are there bad guys in the world? He’s working through those concepts in his cute little brain. It’s something we all in life have to come to terms with and experience. I can’t even imagine if it was that close to your family. Granted, the kids in this show don’t know the whole story and can’t see everything from our side, but I can’t imagine the real-life scenario where you’re learning this stuff about your mom and dad and what they’re doing. I don’t even know what I would do. Probably something similar to what they do! But it’s interesting to see how universal it is, to wonder about the world and wonder about good and bad, right and wrong. I see it happening with my little guys, and I think it’s very relatable.”

Ryan Sands (Geoffrey Wilder): “I love the duality: the public face and the private face. The way our amazing writers have crafted the first two episodes, where we see things from the kids’ point of view essentially, and in the second episode, we see things from the same period of time but from the parents’ perspective. Because there’s so much at stake — the level of secrecy — the public face we have to have is so crucial. We can’t miss a beat. We can’t draw any attention to the craziness that happens in that dungeon when we put those robes on. It’s really, really fun to play: having to smile while being conflicted about what’s really going on. It’s fun. That’s what draws me into the shows that I would like to watch. I want to see something going on behind a character’s eyes. What’s the subtext in that scene? Where’s that line? It’s really exciting.”

Angel Parker (Catherine Wilder): “Playing a villain with a heart of gold, or playing a villain where you understand why they are the way they are — because we do go into backstory, and we do delve into what’s happened 10 years ago and 18 years ago, through flashing back to how we became the way we are — being able to tell that story is one of the great benefits of this story being told as a TV show and not as a movie.”

Kip Pardue (Frank Dean): “We all think that we would do anything for our kids or for our families. You really feel like you would take a bullet for them, or dive in front of a moving car. But what if the stakes were even higher? What if they were even bigger? I get to go to work and play pretend and find out what I would do for my family if there really was something wrong. Are you doing it to protect them? Because you love them? Because you know it’s best for them in the long run? Because it’s best for them right now? All of these metaphors are stretched so far in this show, and it’s fun to answer those questions as time goes on. What would I do? What would Frank do? It’s all a really fun exercise and a really fun puzzle to put together.” 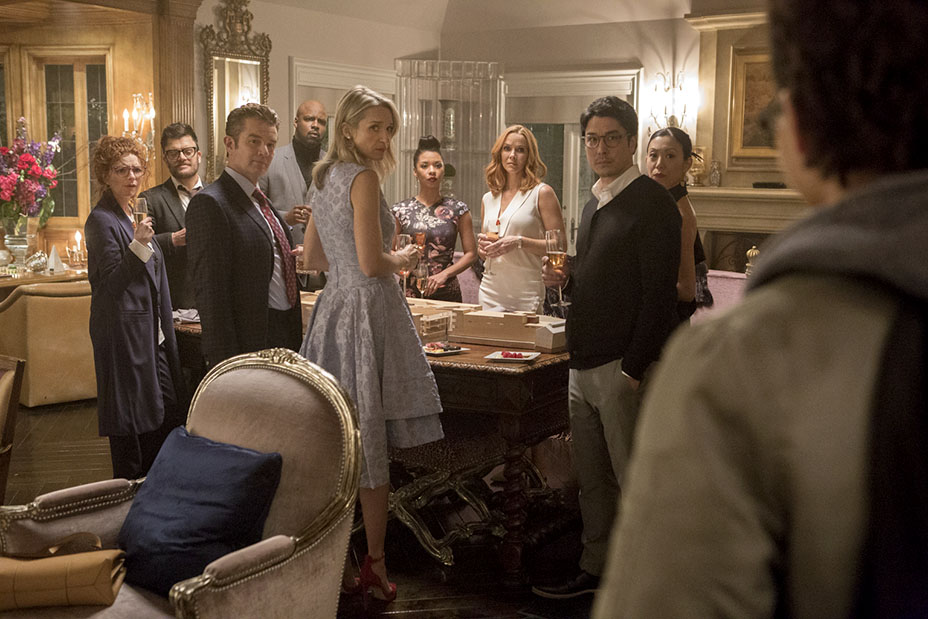 James Yaegashi (Robert Minoru): “Stephanie and Josh said at the onset when we did the first episode that this is going to be a slow burn. There’s still so much to be discovered. I’m actually curious myself: What’s the tipping point where protecting your kid and doing things for their benefit maybe ventures into having to do things that are painful for them for their own good? Where’s that boundary? In a pedestrian world, it might be, do you spank your kid or not? That kind of thing. But the stakes are so much higher here. It’s a really interesting thing. Through the course of the first season, there’s a building frustration with the inability to connect with the family, but there’s also something so much bigger at stake that will require a kind of unified front. I feel like I’m still discovering what that’s like, even playing the quote-unquote ‘villain.’ Honestly, I’m not even convinced that I am playing a villain. Then again, who thinks that? If you ask any horrible person who’s doing horrible things, their conscience probably isn’t at work anyway! Maybe I’ve successfully slipped into that place!”

Kevin Weisman (“Dale Yorkes“): “Most of us are parents, and we like to share stories on set about being parents. My kids are 11 and 9, and there are moments where I’m not their best friend. You have to be a parent. You see the frustration and anger in their eyes over the decision you’ve just made, whether that’s sending them to bed. You always have that fear: ‘My kid doesn’t like me today!’ But you have to be a parent. This takes that idea to the next level.”

Brigid Brannagh (Stacey Yorkes): “It’s a metaphor for life. It’s hard to remember being a teenager. Josh and Stephanie are kind of brilliant at that. Looking at teenagers and into these kids’ worlds, and all my nieces and nephews and all of the teenagers that I see, you’re in such another state about what’s right and wrong and what you think is easy and difficult. Immediately, you think: ‘No, that means you’re against me.’ You have these very decided opinions. Even if you’re actually unsure, in a moment, you have such conviction as a teenager about who you’re going to be and what you believe in. That might change in a month, but there’s this very passionate feeling in general about so many different things. This show is such a perfect example of teenagers looking at the world: ‘Are you for me or are you against me?’ There isn’t a gray area when you’re a teenager. Either you don’t get it, or you do get it. And I think parents feel differently: ‘No, I am for you, but there are complicated forces at work! There are rules for a reason! I’m not trying to destroy your life. That person may be bad!’ I think parents are all gray area, and kids tend to be very black and white.”

James Marsters (Victor Stein): “This isn’t a black-and-white story of good guy teenagers and bad guy parents. Yes, the parents are making huge mistakes, and you can easily see them as villains. But the writing is more complex than that. The parents are actually trying to do the right thing. It’s a complex and sometimes dark world, but it’s also quite light in many places.”

Brittany Ishibashi (Tina Minoru): “I hope it sparks some conversations. Kids rebel. People continue to do that through their lives. You should question authority — not for the sake of being rebellious, but because you can’t always assume that the people in charge have your best interests at heart, and are always looking out for you. If that can inform looking deeper into yourself and finding out what matters to you, and creating your identity, then that’s awesome and great. But hopefully, this starts some conversations in that regard.”

'Runaways': How the First Episode of Marvel's Hulu Drama Plays Out

Sound off with your thoughts on the first three episodes of Marvel’s Runaways in the comments below, and keep checking with THR for continuing coverage of the series.