“Sandra Oh has the offer.”

That became a regular phrase muttered over the course of the past four broadcast pilot seasons.

The actress would pass on everything.

Instead, Oh opted to wait four years after wrapping her decade-long run as Grey’s Anatomy‘s beloved Cristina Yang before she would land on BBC America’s Killing Eve to mark her return to series regular television.

Created by Fleabag breakout Phoebe Waller-Bridge and already renewed for a second season ahead of its debut Sunday, Killing Eve is based on the novellas by Luke Jennings and revolves around a psychopathic assassin (Jodie Comer in a breakout role) and the woman charged with hunting her down, Eve (Oh). Oh’s character is a far cry from Grey’s Anatomy’s confident and career-focused Yang. Eve, while equally whip-smart, is a low-level security services operative whose desk-bound job doesn’t fulfill her fantasies of being a spy.

Below, an admittedly “more confident and more chilled” Oh talks with The Hollywood Reporter about her loyalty to creators who are women of color, why it’s unlikely (for now) that she’ll ever return to Grey’s Anatomy and how Meredith Waller-Bridge became her new “person.”

Every pilot season, your name is always at or near the top of the list of actors getting a ton of offers. With so many opportunities, how has your approach to taking roles changed post-Grey’s?

That question for me is, “Where is your development as an actor, as an artist?” Because I waited [for the right role]. There are so many profound things that Grey’s gave me. I always feel like [it’s a question of] how do you want to grow? That decade on Grey’s was such an important experience of my life that the next thing that I was going to do had to feel as important and as interesting. You never know what’s going to happen with a show. But I know enough that there are certain elements that I needed to feel in order to give [a show] my thousand percent commitment. And that mostly came through Phoebe’s voice. I needed to fall in love with someone.

Meaning fall in love with a script or a character —

Exactly. And mostly I need to fall in love with a writer. I have to find that person that I feel like where is the voice? Do I feel like we could be on the same page? Are we interested in the same things? Do I understand their voice? When I read the pilot, I immediately got her voice. And from our first read through, I felt confident in it. Did I fall in love? I did. I found the right person.

Had you watched Fleabag?

Yes, it’s fantastic. Just when you think that you might know what it’s about or get it, it’s so much more. I was interested in that quality of Phoebe’s writing and to see whether she could bring that to this genre, which she does fully. She’s great at character.

You worked with Shonda Rhimes for a decade. How important was it for you to work for another woman? There aren’t a lot of female showrunners …

I did [John Ridley’s ABC anthology] American Crime in between but it really was about falling in love. When I look at the people who I’ve worked with, it’s women and creators of color because that just happens to be where I am aligned. My first thought out of the gate is not [to ask], are you a woman of color? How much adversity can you hold in your pocket? [Laughs.] I’m definitely interested in those things but that’s not the first thing I’m looking for. I’m looking to fall in love.

You also had the luxury of coming off a decade of one of TV’s most successful shows, which afforded you the financial freedom to fall in love with a script and not jump back into something immediately.

[Laughs] Oh absolutely, yes [Grey’s] gave me the time and confidence to wait [until she loved a script].

And saying no isn’t something that a ton of actors do.

It depends on what kind of actor you are and what kind of circumstances you have and if you’re good at saving your money, which I am. It all depends on what’s driving you. I love my work, it’s really important to me. And if I’m not giving my all in that way and being as clear as possible and honoring it as much as possible then it’ll fall flat. 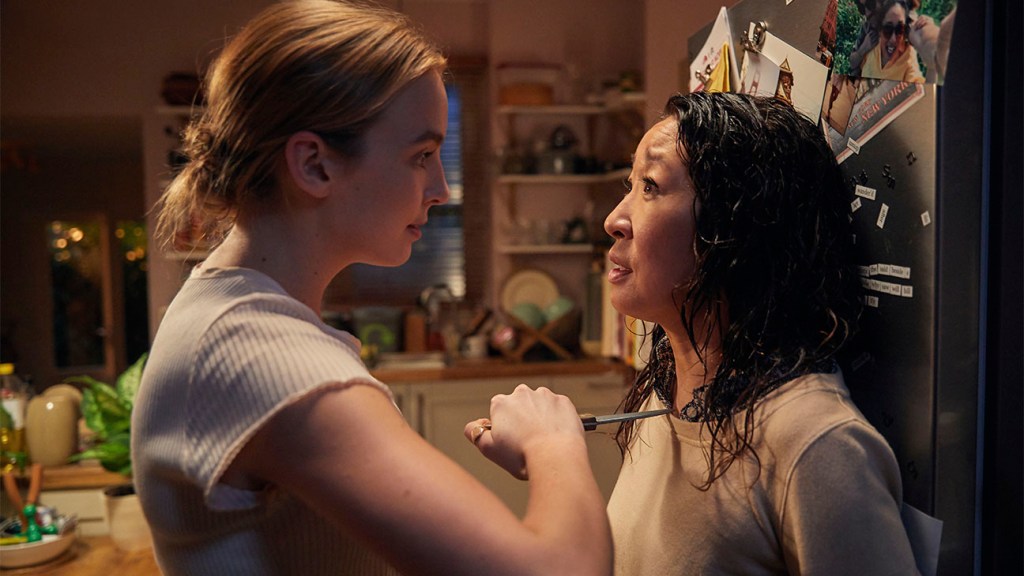 Your character, Eve, is very different than what you’ve done in the past. The show features two strong women facing off against one another, with Eve being in one job and feeling like she could do more. Was there something more to it that pulled you in?

All of it! From a creative and an acting standpoint, I wanted to say, “What is it in Eve — what is it in me — that I have not yet accepted?” Eve thinks it’s about this or about that, right? But this is a psychological drama. Eve doesn’t even know what’s driving her. Villanelle [Jodie Comer] brings this fascination, obsession and emotional excitement to Eve and opens up a world for her that she is not yet aware of and that she needs to integrate. And the darkness. There is something in murder, blood and death — not in an actual realistic way but in a much more metaphoric way — that I was fascinated by. In the first few episodes you realize fashion and beauty are important to Villanelle, who is filled with youthful energy and strength. And these are the things that Eve doesn’t believe she is. But Villanelle sees something in Eve that Eve is not even really ready to accept herself.

Yes! And where does she get it? From a killer! [Laughs.]

Killing Eve is eight episodes. Could you ever see yourself going back and doing a 15- or 22-episode broadcast show again?

No. The landscape has changed too much. Being a veteran of the 22-episode show, I just wouldn’t do it again.

If Shonda called tomorrow and said, “I’ve got this 10-episode thing on Netflix for you…” would you do it?

You bet. I worked for Shonda, Diana Son (American Crime) and Mina Shum, who are also three women of color, for decades interpreting their voices in different ways. And I still work with them — I just did Mina Shun’s last movie, Meditation Park. That was our third film — I did a film for her in my 20s [Double Happpiness], 30s [Long Life, Happiness & Prosperity] and now my 40s. It’s not like I sought this out but these are my major collaborators and unless it ends badly you just don’t stop working with them. 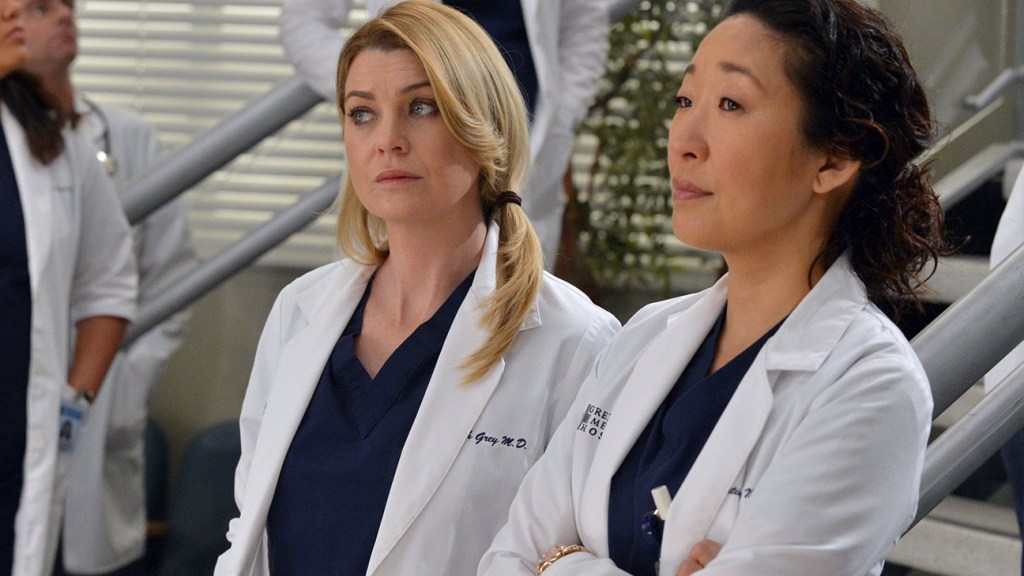 Speaking of collaborators, Krista Vernoff — who wrote and exec produced Grey’s for its first eight seasons — returned as showrunner this season.

I love her and I love what she’s doing with the season.

Have you been watching every episode since you left?

There’s been more than 300 episodes now! I watched a handful and the reason why is that it’s just too anxiety-provoking for me.

As in seeing characters you know going through hard stories like the death of a husband?

No! [Laughs.] I have such vivid memories of what I shot and what was going on. The nature of television, there are things that are cut out that I don’t have control over and that’s fine, but it breaks my heart. It’s tough for me to watch. But I am just so pleased that it continues to have a life. It’s incredible. It straddled two eras of television perfectly. How would you ever be able to grow that loyalty?

With Krista Vernoff back on Grey’s have you thought about going back? Would you ever go back? There have been multiple references to Cristina this season, with your image appearing in the first half.

I’m so fully into Killing Eve, not only character-wise but my commitment to this voice [as an associate producer] on this show that at this point, no. I can’t see it. Now having said that, Grey’s could be on for another decade! [Laughs.] I don’t know where I might be at that point but the idea of being fully rooted and grounded in Eve’s shoes, it would be hard to step out of them and go back into an old pair of shoes that might be honestly too tight.

Would you go back for what would be a series finale, whenever that might be?

I just can’t say yes because it depends on where I am, you know? As for right now, I’d have to say no because I am in another relationship [with Killing Eve]? [Laughs.] But it’s like if we both find ourselves free years down the line, who knows? 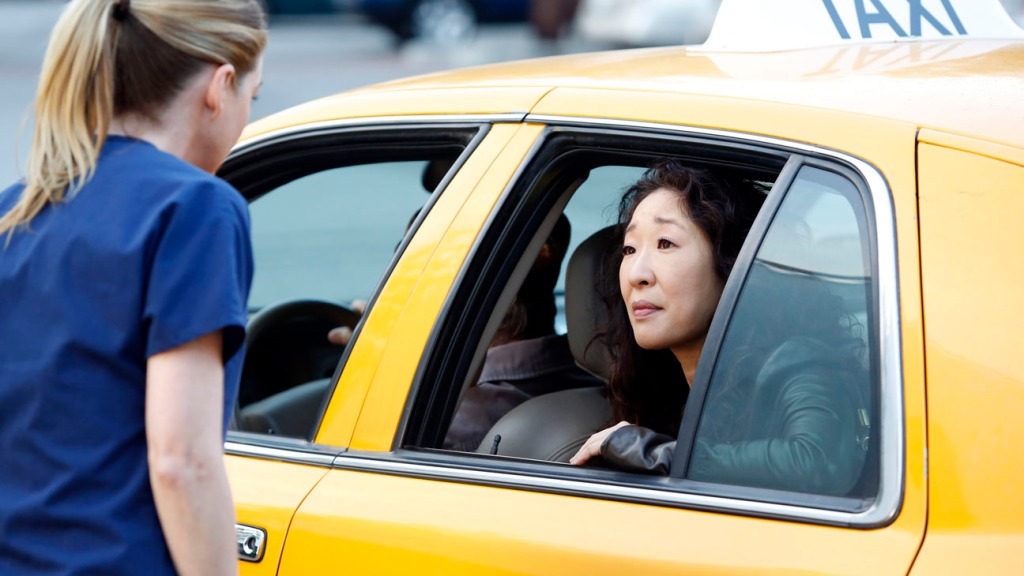