[This story contains spoilers from the series finale of ABC’s Scandal, “Over a Cliff.”]

In the end, the guy with the biggest white hat on ABC’s Scandal was the one who paid the price for the vice president’s thirst for power and the Oval Office.

Following seven seasons of twists, turns and tweets, the Shonda Rhimes political drama signed off Thursday with a series finale that hammered home its central theme of how power corrupts those who crave it most.

White hat-wearing Attorney General David Rosen (Josh Malina) was killed by Cyrus (Jeff Perry), the vice president who, throughout all of Scandal, craved the power of the presidency more than any other character in Olivia Pope’s world of Gladiators and back-stabbing politicos. In the end, Cyrus would never get a taste of that power as he was forced to resign for his misdeeds. Cyrus would ultimately pay for his sins with his life when, in a scene cut from the broadcast but included in Rhimes‘ original script, Huck (Guillermo Diaz) would use his B613 training and kill him.

'Scandal' Series Finale: How Shonda Rhimes Left Her Mark on TV (and Politics)

“It was truly about the fact that there are very few honorable people left in their world,” Rhimes told The Hollywood Reporter about the decision to kill David. “We built Washington as this corrupt place where everybody was corrupted by the Oval Office. David, in that world, had really remained the white hat that existed. To have that person die meant that that was the end of [goodness] for them and there was really nothing left for them to do except face that fact.”

Below, Malina talks with The Hollywood Reporter about his Scandal series finale death and the message it sends about politics in D.C. 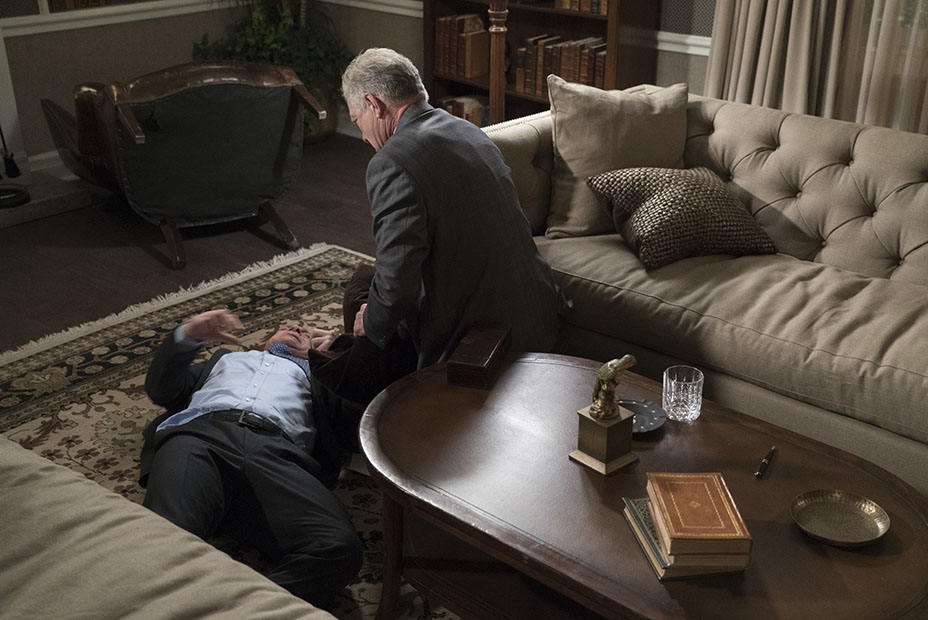 What was your immediate reaction when Shonda called with the news that David was being killed off?

I called her back after she called me. I never answer the phone from Shonda, I have to prepare myself and I thought, “Am I getting fired? Am I in trouble? Am I getting a raise? Does she want me to go to Netflix with her?” I had to do some preparation to call her back and one of the things that did occur to me is, “Maybe she’s killing me off.” That seemed like the most plausible scenario. Even though I went into that call expecting that might be it, I was stunned and my heart started to pound when she was telling me. It was a surprise to me that I cared as deeply as I did. I wasn’t disappointed; it just felt momentous that this thing that I’d made a joke out of for seven seasons was happening. I didn’t want this job to end. This thing that I’d played with in my mind all the sudden was real and here I was, getting that call. She said, “Here’s the thing, it feels like the right thing for me to do. I’ve written you a couple of beautiful scenes and you’re going to get a great exit.” I started to get excited. I knew I’d read the script the next day and she wasn’t telling me anything other than it was happening. She didn’t tell me how it was happening, who was going to do it or how it would play out. Then I started to wildly anticipate the next day’s table read. I felt like I had a great secret and I didn’t tell anyone in the cast; I was excited to see it play out across their faces.

Did you ask why David had to be the one to die?

We both articulated that in the world of Scandal, maybe it made sense that this imperfect guy — but a guy who was always struggling to do the right thing — was the guy who had to go. I definitely got that sense from her.

Did you immediately agree with her decision?

Yes! I’m very comfortable with my position as an actor. Crafting stories isn’t up to me. I’m never the guy who comes in with ideas. The creator and writing staff can’t make any wrong decisions. My job is to bring it to life in a truthful way. Once Shonda told me, I thought it was fantastic. As we hit the finale, I thought it’d be great if I had something really special to do. And when she told me David would be dying, I thought it was pretty special that I’d be going out big. I was pretty happy.

On-screen, David’s death sends a message that the thirst for power can corrupt those who crave it most. But off-screen, what message do you think David’s death ultimately sends about politics?

That is true but I hope not. I think the takeaway would be that there are certain people who are too good for the world of politics and that they can’t swim with the big boys if they’re trying to do right thing. I don’t believe that myself but that’s what world of Scandal is about: it was a topsy-turvy universe and this kind of subversive turning on its head of good and bad. The ultimate trick that Shonda pulled off was getting the audience to root largely for the bad guys. It works in world of Scandal but I hope there isn’t a larger message that this is the only way things work in the real world.

Do you think someone ultimately needed to die for the series to deliver its central message about how the thirst for power can corrupt people?

We certainly could have had a fully satisfying finale without a death. I don’t think there wasn’t a sacrificial lamb nature to it. That said, I like that the stakes were as high as they were. The fact that David died almost obscured the fact that very early in the episode Lonnie killed himself in the political act of suicide that was hopeful to lead to gun control legislation. That was a bold decision on its own.

During the live table read of Shonda’s original script for the series finale, Huck (Guillermo Diaz) goes to visit and kill Cyrus after he is forced to resign as vice president. Were you disappointed to see that scene ultimately cut from the finale?

I was sad to see it go. It would be interesting to know whether it was cut for time or to hear Shonda say why it happened. I think it works fine without it. But I would have liked it as well. What I do like about the version of the finale that aired is that there’s a fair amount left to the audience’s imagination and they’re left to extrapolate what it means that Fitz (Tony Goldwyn) and Olivia (Kerry Washington) had that exchange of [their trademark] “hi” at the end. What does Olivia’s portrait in the National Gallery mean? It’s all up to the viewer. It was a good decision to not wrap up every loose end.

In this era of reboots and spinoffs, was there any talk about a desire to not kill anyone — even though Shonda has repeatedly said Scandal is done?

If I can be fully candid, that slid through my mind as Shonda told me I was being killed off. I was delighted and thought it’d be fun. But then this little banner in my mind went, “Forget about the reboot! No revival! No movie!” I pitched Shonda that if there were ever a reboot, David could come back in a flashback and the audience could wonder why David Rosen was so much older in flashbacks. (Laughs.) “I thought he died at 52, why does he look like he’s in his 60s now?!” We’ll never know!

As you look back, what was it like filming the death? Was that the final day of production on the series?

David’s death wasn’t my very final scene. I was in the final scene that was shot at the QPA conference table group scene, which was a lot of fun. I was happy to be in front of the camera for the final moment and last cut of the series. That I was filming my death scene not on my last day of work was nice because I didn’t have to have the emotional, “Oh my God, I’m dying and I’m done on the show.” We were able to just focus on the physicality of it and make it look real and right.

Anything else you’d like to add? This is our final story about the Scandal finale …

It’s been a great ride and I’m very thankful to the Gladiators who stuck with us the whole way.

What did you think of the Scandal series finale? Sound off in the comments section, below. Head to THR.com/Scandal for full coverage of the series finale, including interviews with the cast. And be sure to read our feature with Rhimes on the legacy she and Scandal leave behind and our guest column with Bellamy Young about what she learned from her time working in Shondaland, our Scandal oral history and the cast answering all the finale burning questions. To keep up with what each of the Gladiators are doing next, click here.

'Scandal': What's Next (and Fun Facts) for Each of the Gladiators