For only the second time in Scandal‘s six-season run, the ABC political thriller shockingly said farewell to a series regular.

“I have been a fan of Portia’s for years and it was an honor to have her join our Scandal family,” Scandal creator and showrunner Shonda Rhimes said in an exclusive statement to The Hollywood Reporter. “Portia infused Liz North with a smart, powerful and vulnerable soul while also making the humor sing — and that brought all of us in the writers’ room a lot of joy. If I could keep her forever, I would — but kidnapping is illegal. Besides, I am incredibly impressed with the vision she has for her creative future. I wish her all the best.”

Elizabeth was killed off as the so-called Mystery Woman (Zoe Perry) and her boss, Peus (David Warshofsky), sent a deadly message to Mellie that they would be making her dreams nightmares come true by blackmailing the electoral college and sending her into the White House as the country’s first female president.

As Mellie valiantly attempted to stand up to her newly revealed benefactors — she wanted to hang them for the murder of President-elect Frankie Vargas, among other charges — the Mystery Woman used a golf club to beat Elizabeth to death. The savage beatdown helped get Mellie to fall in line. As the electoral college votes were revealed, Mellie achieved her dream of winning the presidency — only it comes at too high a price, as her benefactors threatened to kill her children if she attempted to cede to Cyrus (Jeff Perry).

Meanwhile, Fitz (Tony Goldwyn) had Olivia’s (Kerry Washington) father Rowan (Joe Morton) seemingly arrested, only he was being kept under close protection at the White House in order for Fitz and Olivia to (finally!) reteam in order to take Peus down. (Thursday’s episode ended with the long-awaited romantic reconciliation between Olivia and Fitz.)

As for de Rossi, the diehard Gladiator first joined the series as recurring in season four and was promoted to series regular ahead of season five. She becomes only the second series regular to be killed off of Scandal, joining Columbus Short, whose Harrison was killed off when the actor’s option was not renewed after a three-season run amid domestic abuse allegations. Elizabeth is the latest in a line of shocking deaths on Scandal as de Rossi joins Dan Bucatinsky’s James, Ricardo Chavira’s Frankie Vargas, Jerry Grant Jr. (Dylan Minnette), Verna Thornton (Debra Mooney), Amanda Tanner (Liza Weil) and Andrew Nichols (Jon Tenney), among others.

To hear de Rossi tell it, she was the one who decided to change gears and approached Rhimes with her desire to focus on art. Read on as de Rossi talks with The Hollywood Reporter about why she opted to leave and what she hopes viewers take away from Elizabeth’s death. 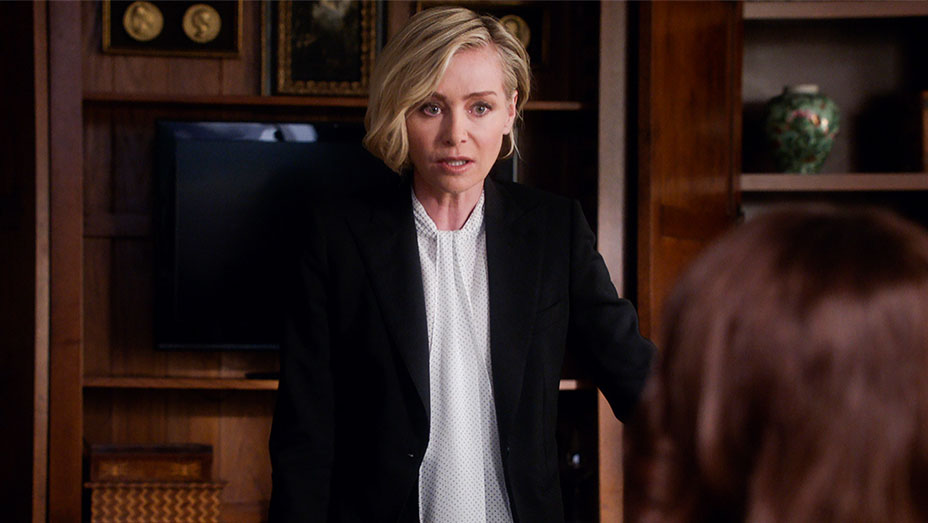 Whose decision was it for you to leave the show?

It was my decision but not because I no longer wanted to be part of the show. It was more because I found a great business opportunity I wanted to pursue that was taking my interest away from acting and a career I’ve had for 20-plus years and putting it elsewhere that was very timing consuming. I approached Shonda and asked if it would be OK if I could leave Scandal. She was nothing but supportive and wished me luck in my business venture and was gracious and lovely about it.

It’s a little premature to talk about at this point but it’s along the lines of my earlier passion for art and to get art into the hands of anybody who wishes to own it. It’s what I wanted to do with my career a long time ago and then I fell into acting. Now I really have returned to the idea of having a business and being a business owner and having my love of art being incorporated into my business venture. There is technology that enables more people to enjoy art rather than a very privileged few. This business concept is to democratize art and get it into the hands of the people who appreciate it and want to own it.

Are you done with acting?

That doesn’t mean that I’ll never act again but for right now I want to concentrate on this full time. In the future, you never know — Shonda might figure out a way to resurrect Elizabeth from the dead or perhaps maybe I’ll do something acting-wise in the future.

There’s another season of Arrested Development in the works. Will you be returning for that, when and if that comes together?

Arrested Development is very dear to me and I love being part of that franchise. Let’s just say nothing is off the table.

Scandal-wise, whose idea was it for Elizabeth to be killed off?

It’s always exciting when there is a series regular in peril and killed off. I thought that would be an option. But it was Shonda and the team at Scandal that came up with the method by which Lizzie dies. It was pretty shocking to me, as I’m sure it was to the audience. It comes out of nowhere. It’s a very strong Scandal death. It certainly packs a punch.

You’re only the second series regular to be killed off the show. The first was Columbus Short, who had personal issues.

Elizabeth is a very strong character and she should go out in a very impactful way.

Did you pitch a different idea for how Elizabeth would go out?

What was the reaction to Elizabeth’s death like at the table read?

Once or twice a season, they won’t do a table read for an episode and this was that episode that did not get read at table. It was a blessing for me because I love everybody at the show and would have been a mess, even though it’s something that I wanted. I probably would have blubbered my entire way through the table read. They couldn’t figure out how to put a table read into the production schedule. I didn’t have to sit through that because I’m pretty emotional and will miss those guys.

What do you hope viewers takeaway from Elizabeth’s death? Her death paves the way for Mellie to become president in a horrible scenario.

It’s a huge moment for the show. If the audience hasn’t learned yet to be good and honest people and to not make deals that compromise your moral integrity, then this is another reminder that anytime any Scandal character lusts after power — which is the commodity on the show — really bad things happen! We see it over and over again, yet it’s shocking somehow; it’s the theme of the show!

Season six has featured a lot of flashbacks. Have we seen the last of Elizabeth North?

If I was invited back, I would absolutely love to come back and play around with the cast. It was one of the most fun jobs I’ve ever had and everybody is so terrific on that show. I would absolutely entertain coming back. As of now, Elizabeth is dead.

It was my last scene. It was a strange day. As the day was approaching, I was getting anxious about it because it closed a chapter in my life and I knew that I’d miss seeing everybody and doing the show but the thought of being murdered and having to live through that scene made me nervous. At the same time, I realized I’d never invited my mother to the set. She’s a huge Scandal fan and always had been and I’d promised to invite her to set. I was in hair and makeup when I realized I hadn’t made good on my promise and invited her to set. It was such a bizarre scene: me laying in a pool of blood on the floor and my mother sitting in a chair chatting with me while crewmembers were walking over my “dead” body to change lighting and get ready for the next shot. My hairpiece had stuck to the carpet (see video below) and I couldn’t get up without it being a big ordeal and I didn’t want to put everyone through the time it would take to put me back together, “dead” on the floor. So I just laid on the floor while people were walking over my “dead” body, chatting with my mother. It was really bizarre! Kerry Washington, Bellamy Young and Scott Foley would come talk to me and stand over me and take bizarre pictures and chat with me in between set-ups. It was my mom and the cast keeping me company while I played dead on the floor in a pool of my own fake blood. It was so strange. Someone took a picture of me taking a selfie of myself dead on the floor and I texted it to Shonda and Betsy Beers and wrote, “Who said you can’t take selfies when you’re dead?!” It was great to spend that day with those guys. They were super supportive and we all had a great day.

We love you @portiaderossi ?? always will. Thank you for making us better. #Scandal #scandalfam

'Grey's Anatomy,' 'Scandal,' 'How to Get Away With Murder' Renewed

Did you keep anything from the set?

The photos and notes from the cast I’ll keep forever. I didn’t pilfer anything from the set to take home with me. Although now I wish I did — no actual object. I should have the bloody golf club and frame it and put it on my office wall! That would be a great souvenir.

Will you miss de Rossi on Scandal? Did Elizabeth’s death surprise you? Sound off in the comments, below. Scandal airs Thursdays at 9 p.m. on ABC.