[This story contains spoilers from the season six finale of ABC’s Scandal.]

ABC’s Scandal wrapped up its sixth season by introducing a new president — and a new, darker version of Olivia Pope.

After successfully getting Mellie Grant (Bellamy Young) elected and sworn in as the show’s next president of the United States, Olivia finally cracked who was behind Frankie Vargas’ assassination.

The culprit: Frankie’s wife, Luna Vargas. Only Cyrus (Jeff Perry) was the puppet master who put forth the notion that Luna would be more effective in the White House if she were the widowed vice president of the United States.

While Olivia (Kerry Washington) cracked the case — with Quinn (Katie Lowes) and the rest of OPA, which officially welcomed Abby (Darby Stanchfield) back into the fold — she went dark in the process. Olivia used her power as Mellie’s chief of staff to push through orders to reinstate black-ops group B613. But rather than bringing her father, Rowan (Joe Morton), back to run it, Olivia instead takes on the role of Command, becoming what Cyrus dubbed the “most powerful person in the world.” And her first order? Nominating Cyrus — as the new VP after successfully eliminating the Luna threat. 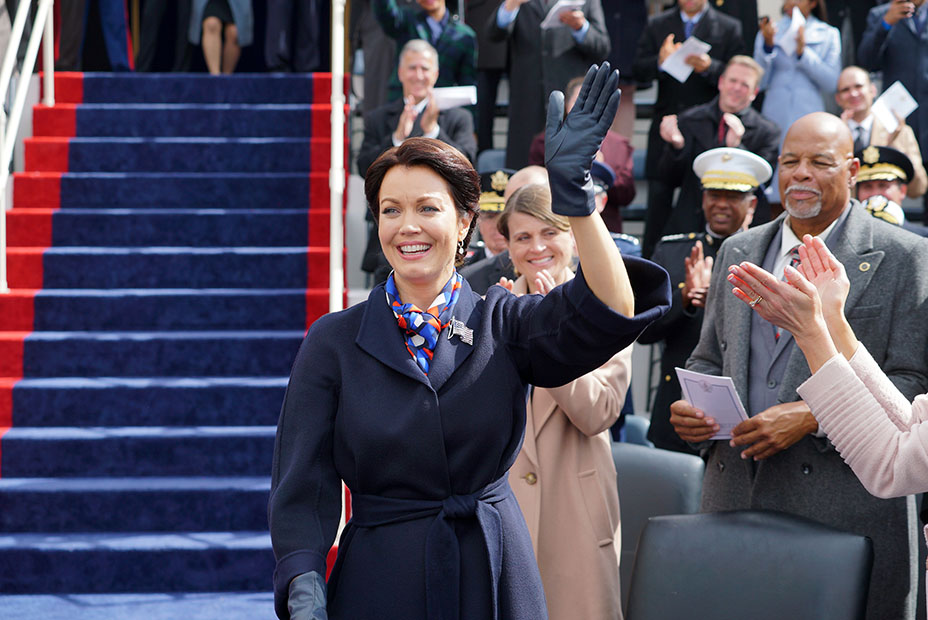 The move came after Olivia talked Fitz out of reinstating B613 and running it himself, as the outgoing president left D.C. to run his foundation in Vermont. (Rest easy, Gladiators, THR has confirmed that Goldwyn will indeed still be a series regular when Scandal returns in the fall.)

The twisty events set up Scandal‘s seventh and newly announced final season to explore Olivia’s thirst for power, a world with a female president and, on the OPA side, seeing nearly all of the OG Gladiators back in action, together.

Below, star Young — whose Mellie was originally only supposed to appear in three episodes of season one — talks with THR about her wild journey to the White House, Scandal‘s final season, what happens when Olivia goes bad and how the country’s political narrative changed season six. (Hint: “I am not sure that Mellie was meant to be president,” Young says.)

When did you know that season seven would be it for Scandal and how did you and the rest of the cast respond?

Shonda just told us last week so we’ve known for a week. It was a difficult conversation but she’s right and we know she’s right. She’s always said she knew where the story starts and she knows where the story ends. She wanted to go out on a high and finish it the way she wanted to — and not overstay our time at the ball. But it was still crushing for all of us because we’ve become such a family.

Were there tears? Did anyone pitch alternatives to keep it going or spinoffs?

No one pitched alternative ideas, spinoffs or extensions. We were grateful — shocked and a little speechless. Kerry stepped up as our thoughtful, heartfelt and eloquent leader and was able to speak for all of our hearts and thank Shonda for this ride and be appreciative that we get another year together to really bring it home in the way we know we can.

Did you talk about the ultimate series finale and what Shonda has mind?

We don’t even ask; we trust her completely and didn’t get into that. We accepted the news and we all knew that our days were numbered when we did 15 episodes this season and thought it might be the beginning of the end. So much changed this year in terms of our real world and the way that our writers found to tell the story that we got our hopes up that maybe they would all be reinvigorated and would stay with it longer. But I can’t say that any of us were genuinely surprised by Shonda’s announcement. We were sad and took it in and then in fine Scandal family fashion, had a love fest and were grateful for our time and to have all of next season to see where these characters land.

'Scandal': Why ABC (and Shonda Rhimes) Decided Season 7 Was the End 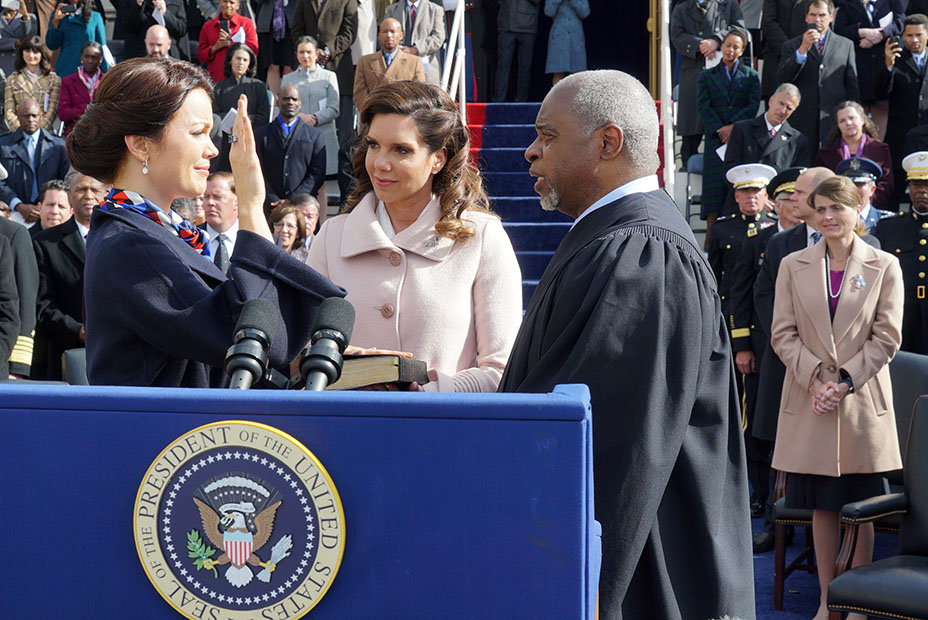 How much do you know about season seven? Do you have an episode count? Will there be a time jump?

I don’t know anything content. I was told 18 episodes, but I don’t know that that’s reliable information.

In terms of the finale, how does Olivia going dark and reinstating (and running) B613 set up what’s to come in season seven?

We’ve always had some major cliffhanger but this is such a different circumstance this year because it’s the end of an administration so everyone is reinvented. What is Fitz going to do? Where is Abby going to go? Will Mellie finally get to be president? Thank heavens, yes! What’s interesting is where Olivia will be in terms of her morality. We’ve seen a very heroic Olivia with a lot of white hat wearing. We’ve seen a very dark Olivia in the days of kidnapping. Papa Pope has an incredible bit of material in the finale about how absolute power corrupts and has to leave so that Olivia doesn’t have any weaknesses. Olivia’s moral fiber is being put on trial by having it all — she has unlimited power both in the light and the dark: she has the White House and B613. It will be an interesting time and a befitting ultimate final chapter for finding out who Olivia Pope really is. And she’ll be finding out as we do. It’s going to be a really interesting last year.

Do you have a sense about the theme of the final season?

It’s good vs. evil. That also resonates politically for the people who work on the show creatively — especially with where we are in the world right now. We’ve done a lot with racial politics but with Mellie in the White House and Quinn being pregnant, there’s fertile opportunity to explore gender politics in the workplace.

What kind of president will Mellie be?

It’s interesting when something you wanted your whole life finally shows up. Who are you anymore without the identity of wanting it? Can you be the person you thought in your dreams you would be? This last chapter of trying to become president was formative for Mellie. She went through hell and had a very naïve notion of being president instead of being the president. Now that it’s a reality, I hope it will ground her in her power. She fluttered above power for years because so much of her opposition was ornamental and not functional. I hope she’ll allow herself to come from a place of truth and, if not integrity, strength and wisdom. But it will be interesting with Olivia having gone so dark to see how much friction there is between the two of them next year.

We’ve talked a lot over the years and I always remember the story about your audition — wanting to come in very Jackie-O. Now that Mellie is president, has your approach to playing her evolved?

Yes! These last few episodes we’ve been going in a direction that is much more clean and strong and not so sudden and never frivolous. It’s interesting how women are told to tone down their femininity when they assume a position of power, at least in America. And that’s definitely a precipice that we’re on. But it will be interesting because Mellie is single and a parent and all of those things also factor in to who she is; she’s not just a person who has a job. Mellie is lonely and has now achieved her dream of being president and now she wishes she had someone to share it with. It will be interesting to see how she incorporates those sides of herself and how everyone else’s expectations can be honored in a new way — visually and mentally — as she becomes president.

ABC's 'Scandal' to End With Season 7 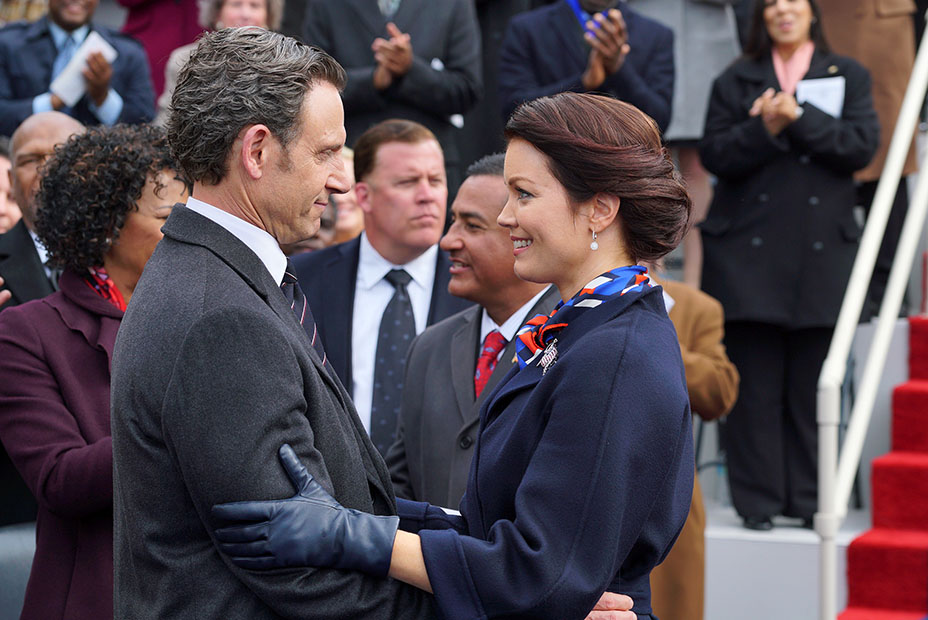 Let’s talk about filming the inauguration scene. Did Shonda have specific notes? The crowd was definitely bigger than Trump’s inauguration. Was that by design?

In the script, it was really important that as they were deciding whether it was safe to have an inauguration that it became increasingly important to Mellie as she saw all the women coming from all the corners of the world. Like this was not her moment but it was their moment. Shonda really wanted people to see and feel how important it is to America that we get to see a woman in a position of power. We’re way behind the rest of the world in that regard and, if anything, that is what she wanted everybody to walk away with. That it would really mean something.

You guys. Mellie. In her Oval Office. While Aretha sings us It’s My Turn. Like I said. National healing. #SCANDAL #TGIT

How much do you think Mellie becoming president — the first female president in the show’s reality — serves as a bit of wish fulfillment given what happened in November? Did you know at the start of the season that Mellie would become president?

I didn’t know until she was being sworn in that Mellie would get to be president! A lot changed from the time we started [production on season six] in the summer and when we came back in January [after a break to accommodate Washington’s pregnancy] for episode six. [The writers] had to change a lot of where the rest of the season went. I am not sure that Mellie was meant to be president — and I don’t know if Shonda will ever tell us that. I really wonder though because so much has changed. I feel in my heart it might have been a response to the current situation in the world but I have no way of knowing that for sure.

What did you think of Scandal‘s season six finale? Share your thoughts about the final season below. Scandal returns in the fall on ABC.