Continue to The Hollywood Reporter SKIP AD
You will be redirected back to your article in seconds
Skip to main content
April 18, 2018 6:00am
Logo text

When ABC’s Scandal signs off Thursday after seven seasons, 120-plus episodes and millions of tweets, it will also mark the end of the Shonda Rhimes era on broadcast television.

Created by Rhimes, the fast-paced political soap launched as a modest seven-episode midseason order in April 2012, becoming only the second broadcast television drama toplined by African-American woman ever. The Kerry Washington starrer about corruption in Washington, D.C., will be the final series created specifically for ABC by Rhimes, as the prolific producer behind Grey’s Anatomy left her longtime home at ABC Studios last year for a nine-figure payday at Netflix.

'Scandal': A Series Finale Primer as the Gladiators (and B613?) Say Farewell

To think about the strides that television — and Rhimes — have taken since Scandal first bowed is overwhelming. (Rhimes, in fact, still struggles to discuss the show’s legacy and her impact on broadcast television as a whole: “I’m not one to examine legacy,” she says.) Rhimes and Washington helped usher in a new (and overdue) era of inclusivity on the small screen that broke barriers and proved viewers wanted to see themselves reflected in primetime scripted storytelling. Shows including ABC’s own Black-ish, Fresh Off the Boat, Speechless and FX’s Atlanta, Starz’s upcoming Vida and countless others had an easier path to the screen thanks in part to the trailblazing path that Scandal set.

“Now it feels very normal and obvious that women of color can lead shows, so hopefully that is something that Scandal has done,” Rhimes told a small group of reporters, including The Hollywood Reporter, during a recent conference call. “Hopefully we’ve created a world in which we’ve stopped seeing these characters on television and it’s a magical anomaly that they’re there and there’s an otherness to them.… Hopefully we’ve made a dent in that.”


When Scandal launched, it was the third series created by Rhimes that was on the air at the time and joined Grey’s and its first spinoff, Private Practice. In the seven seasons since, the political drama became a water-cooler hit both on Twitter — thanks to star Washington’s idea to have the cast live-tweet and create a community of so-called #Gladiators — and in high circles, counting fans including Barack and Michelle Obama, Oprah Winfrey and other tastemakers around the globe. That helped ratings spike for season two, with ABC quick to hand out a back-nine order for the drama, which added Scott Foley (Jake) for the back half of the season as Rhimes and her team of Gladiators created a love triangle for Olivia (Washington) and President Fitzgerald Grant (Tony Goldwyn).

But between Olivia’s time standing in the sun with Jake and dreamy Vermont vacations with Fitz, the series always had one central theme since day one: how the Oval Office and the lust for power corrupts. When the series premiered, Olivia had already rigged an election to put Fitz in office. In the seasons that followed, Scandal would explore storylines that ranged from the outrageous — the sitting president would kill a Supreme Court justice; a formerly secret black-ops group called B613 would kill the president’s son in a struggle for power; and Olivia would rig a second election to put the former first lady in office — to ones that ultimately had to be scrapped as they struck too close to reality. (In season seven, Rhimes and producers scrapped a storyline about Russians hacking the election after that became a global headline amid Donald Trump’s surprising victory over Hillary Clinton in the presidential election.)

'Scandal' Stars Say Goodbye Amid Debate: Who Gets Their Happy Ending?

“It’s always been my contention that the Oval Office, in our show, was a place that corrupted anybody who came near it and the closer you came, the more corrupt it made you and the more damaged it made you,” Rhimes says. “Olivia started out as the character that we knew who has very much believed in how important this particular kind of power was and how molding it and being a part of it was — and we watched her, like everybody else, become absolutely corrupted by it, and make all the same mistakes that everybody else makes to get what she wants from it.” 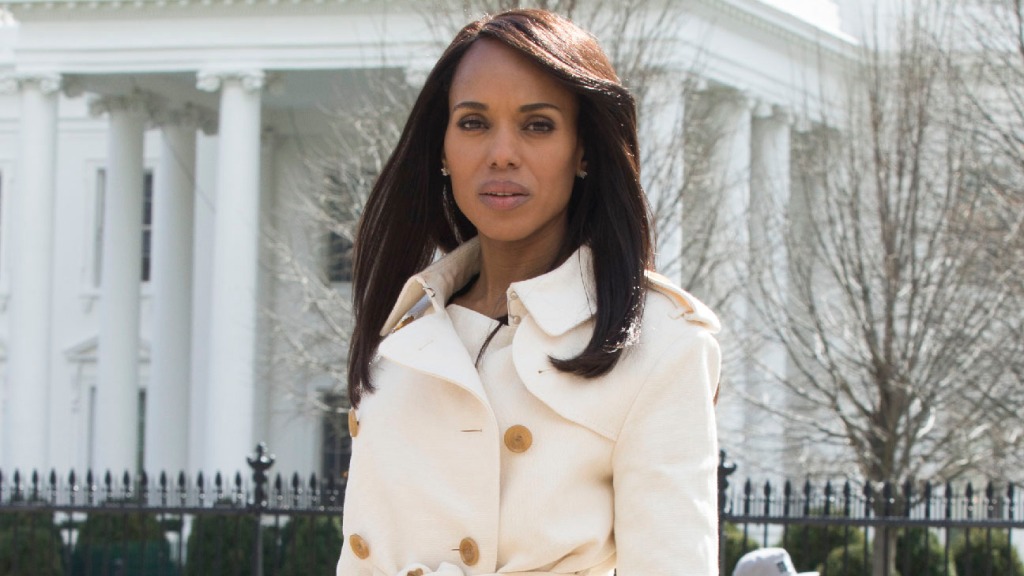 That included the season-six finale in which the former D.C. fixer— after getting former first lady Mellie Grant (Bellamy Young) elected president — took over as head of B613 and seized the most powerful position in the country. To hear Rhimes tell it, the season-six finale — with the first woman elected president of the United States — was how she originally imagined the series would end. “We basically did what I had planned to be all of season seven in the finale of last season’s Scandal, so [Thursday’s series finale] is very different,” Rhimes says of how she originally envisioned the show’s ending.

'Scandal': Why ABC (and Shonda Rhimes) Decided Season 7 Was the End

While Rhimes cites writing for Jeff Perry (Cyrus) and Joe Morton (who won an Emmy for playing B613 leader Rowan) among her highlights, she singles out Young’s journey — on- and offscreen — as one of the most surprising and exciting of her Scandal experience. Young was originally cast for only a limited guest role in season one as Mellie, the first lady whose president husband was cheating on her with Olivia. As has become a fun fact in Scandal‘s history, Rhimes knew early on that she wanted to write a presidential divorce and, while that storyline wouldn’t come until much later, Young was promoted to series regular for season two and quickly became one of the show’s most beloved characters. “The evolution of that character — as a woman from bitter wife to president of the United States of America — has just been a dream,” Rhimes says.

Mellie’s presidential victory was plotted out as many, including the Democratic showrunner, thought the series would parallel real world politics with Clinton’s election as the first woman to take control of the Oval. Instead, Mellie’s journey would serve as a bit of wish fulfillment for Rhimes, who hosted a fundraiser for Obama and, with the Scandal cast, visited the White House during his administration and campaigned for Clinton. And while the series has had a number of storylines that experienced brushes with reality, Rhimes says the Scandal series finale is less about making a statement about politics in D.C. than it is completing Olivia’s journey.

“We’ve been talking about a political world that I hope no longer exists — or that I hope begins to cease to exist at some point,” she says, noting that it’s up to the audience to decide what kind of statement Scandal is making about the nature of politics in D.C. “We’ve been telling a story this entire season and heading toward an end. And the finale is really about finishing telling the story.”

'Scandal': The 9 Episodes That Helped Define the Shonda Rhimes Drama

The final season has charted how the B613 power has corrupted Olivia as well as her journey back to stand the sun. That culminated in the penultimate episode of the series in which she went public with the existence of the black-ops group, putting everyone — herself, Fitz, Mellie and all her Gladiators — at risk.

“One of the things that Olivia says in the penultimate episode is this idea of standing up and being somebody who puts everything out in the open is important,” Rhimes says. “Whether or not everybody pays for what they’ve done, I don’t know that that’s what the finale is about as much as it’s about seeing what happens once that choice has been made. We’ve put them in a fairly impossible position and you get to find out what happens and how that gets solved and where our characters go from there.” 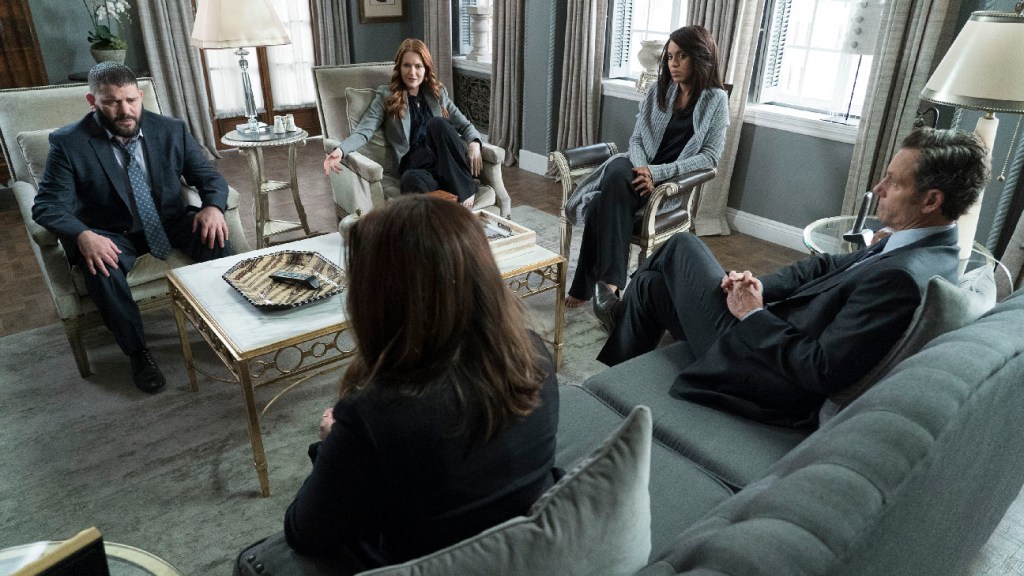 To that end, Rhimes says to expect a “few” familiar faces to return for the series finale that will explore how Olivia “figures out who she really is.” (Our educated guess is that Olivia’s original No. 2 Gladiator Stephen, played by Henry Ian Cusick, will return to share that moment with his old friend.)

Series Finale Alert: All the TV Shows Ending in 2018

“I’ve always said I’m more Team Olivia than every other team [and] it was most important to me to watch Olivia figure out who she is and what she wants as a person,” Rhimes says, noting the ultimate end is not really about the character putting her famous “white hat” back on again. “We’re finishing the evolution of the character of Olivia Pope. The story is being completed and you’re going to find out what happens.”

While Olivia’s evolution will be completed, Rhimes notes that the finale will, in part, be left open-ended. “Yes, the story is wrapped up and, yes, the audience gets to imagine some of what happens next for the character,” she says.

In terms of Scandal‘s future, Rhimes — who once seriously considered doing a B613 spinoff — confirmed that the end of the series is indeed the end of the franchise and there are no offshoots planned: “Scandal is done.” While it would be easy to revisit the world of corruption and Gladiators on ABC’s Rhimes-produced drama How to Get Away With Murder after both series crossed over earlier this season, there are no current plans for that, either, though she stressed that the decision ultimately lies with showrunner Pete Nowalk.

Looking ahead, Rhimes’ current roster of broadcast fare consists of veteran Grey’s Anatomy, which when ABC officially renews the Ellen Pompeo-led soap for a 15th season, will tie with ER as broadcast’s longest-running medical drama. Rhimes handed off day-to-day control of her first TV series to Krista Vernoff, who returned to the series this season after a six-year detour. Still to be determined are the future of Rhimes-produced dramas For the People, with the legal soap struggling to cut through; and Station 19, the second spinoff to come from Grey’s that has better odds of returning for a second run. (This pilot season was the first without a Rhimes-created or -produced order in five years.)

Asked to look back at her impact on broadcast television Rhimes — who, thanks to Scandal, catapulted to become a brand of her own with a thriving lifestyle website and as published author — struggles to find the right comparison. “This is where I’ve spent my entire career and this is where I learned to write television — and it’s the only game that I know,” she says of her journey that has made her among a rare breed of showrunners to have created three shows that each topped 100 episodes. “I’ve been incredibly fortunate.”

'Scandal': A Series Finale Primer as the Gladiators (and B613?) Say Farewell