In Showtime’s limited series The Good Lord Bird, co-creator and executive producer Ethan Hawke stars as the infamous abolitionist John Brown. The series — based on the National Book Award-winning novel by James McBride, and told through the perspective of Onion (Joshua Caleb Johnson), a young slave boy masquerading as a girl — follows Brown’s violent crusade against slavery from the pilot’s opening scenes to the show’s conclusion in Harper’s Ferry, Virginia, where Brown led a raid against the Federal Armory in 1959 that served as the instigating event for the Civil War.

Following the irreverent tone of McBride’s darkly comic novel, The Good Lord Bird isn’t necessarily historical revisionism, but the tall tale takes certain liberties with the truth as it is told through an unreliable narrator. For co-creator and showrunner Mark Richard, balancing the comic touches with the brutal period of American history was a challenge from the series’ very beginning.

In the script excerpt below — taken from the first episode, titled “Meet the Lord” — John Brown delivers a fiery speech before beheading a pro-slavery settler in Kansas named James Doyle. An original scene to the series not lifted from the novel on which it’s based, Richard tells THR it was the most dangerous moment of the pilot. “How do you justify John Brown’s killing of this guy?” says Richard, who says that Hawke himself wrote much of the dialogue he delivered in character. The answer is found in Brown’s speech, in which he brings young Onion into his family as one of his own.

Richard always saw The Good Lord Bird as a risky project because of its satirical tone and deeply heavy subject matter. This scene, he says, was perhaps the most dangerous, but Hawke assured him it was necessary.

“I have to give credit to Ethan for really driving the writing on this scene,” Richard says, singling out the speech that Hawke wrote to justify Brown’s violent actions against Doyle. Brown points to Onion — whom he and his companions believe is a girl — and asks his sons to defend their sister’s honor. “It groups a relationship from a racial point of view into a humanity perspective,” Richard continues. “When he came up with that, I was going ‘Bingo!’ “ 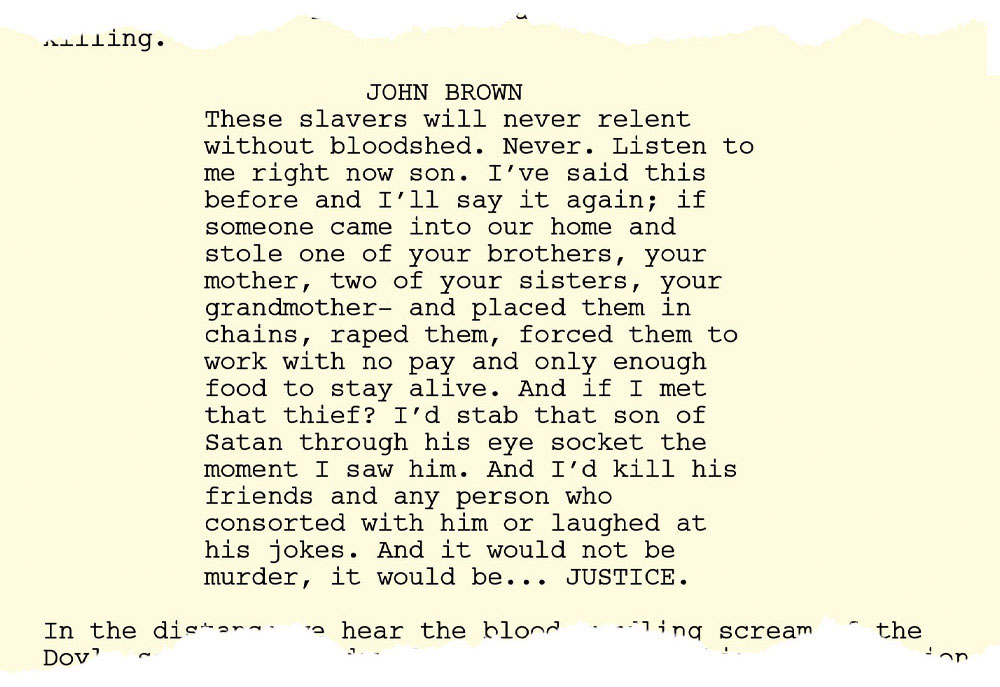 Although the series is based on the novel by James McBride, this scene was original to the series. “How do you justify John Brown’s killing of this guy?” Richard says. “That makes him really hard to redeem from the get-go. Ethan, as an actor, was trying to figure out how he was going to play it, and he said, ‘We’ve got to go full throttle on this.’ ”

Richard and Hawke needed the murder to be grisly and unsettling, especially as seen through the eyes of the show’s narrator, Onion (Joshua Caleb Johnson). “We also wanted to get away from the white savior-ism of it,” Richard explains. “John Brown was not there to save Black people — John Brown was there to save the white people from their mortal sin of slavery.” 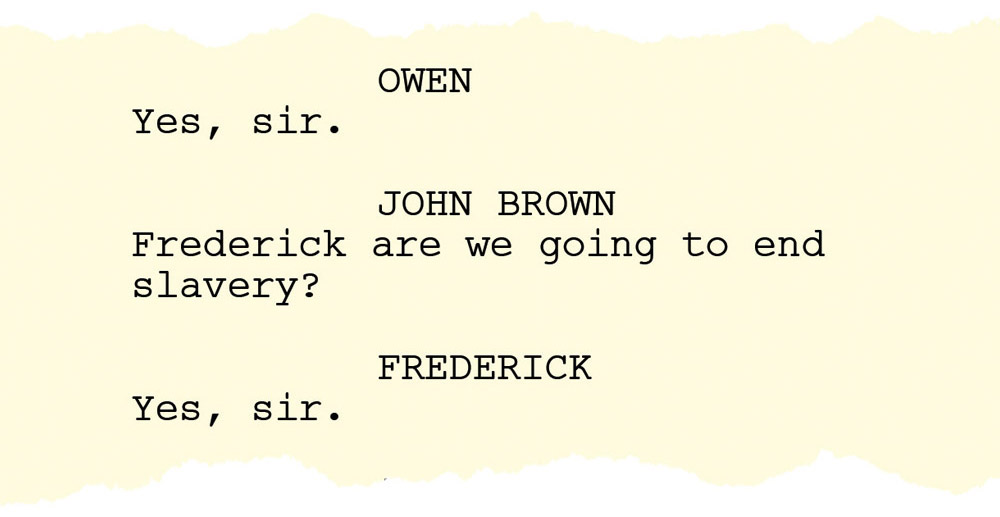 “We did want to make sure that Doyle was complicit in slavery,” Richard explains, which complicates his killing. “John Brown gets him to admit his guilt, and now we’re into a gray area: Doyle isn’t an innocent, and John Brown isn’t a murderer. John Brown knew he had to start the war and enlist his sons.”

As much as Richard and Hawke adored McBride’s National Book Award-winning novel, there was still room to add scenes to carry the narrative through a seven-episode series. “I would often send pages to McBride with my hat in my hand, and 100 percent of the time McBride would say, ‘Man, I wish I thought of that. Go with God!’ “

“This could have gone south in a lot of ways,” Richard says of the series. “My hat’s off to Showtime and Blumhouse for seeing this through. It’s a dangerous show, and it’s an honest show, and my confidence started to rise [as we were filming], but in this pilot I was really unsure. This scene especially had to be pitch-perfect.”