FX, whose president John Landgraf coined the “Peak TV” name for the explosion in scripted originals, has released new research to indicate that the growth is far from over.

A study released Wednesday by the basic cable network found that the number of scripted originals hit a record 455 in 2016, up from 421 in 2015. Of that tally, online services like Netflix, Hulu and Amazon represent 93 series, with the streaming originals category growing 1,450 percent since 2011.

The study comes four months after Landgraf told reporters at TCA that the scripted surge is showing no signs of slowing down. His team predicted that the number of scripted originals is likely to reach 500 shows in 2017. During the same presentation, Landgraf accurately predicted that calendar year 2016 would reach 450.

“I wrongly predicted that we’d hit the peak in 2015 or 2016,” Landgraf said at the time, noting that the number of English-language adult scripted series in the U.S. will reach as high as 450 by year’s end — with current trends placing the 2017 total closer to 500 shows. “It now seems clear that, at a minimum, the peak will be in calendar 2017 — and there is enough inertial momentum here that we could well see the growth trend carrying over into the 2018 calendar year.”

Of the 2016 findings, the number of basic cable originals dipped (down seven), as did premium cable (off one) as well as broadcast (off five), while streaming exploded (from 46 to 93).
Check out the full chart, below. 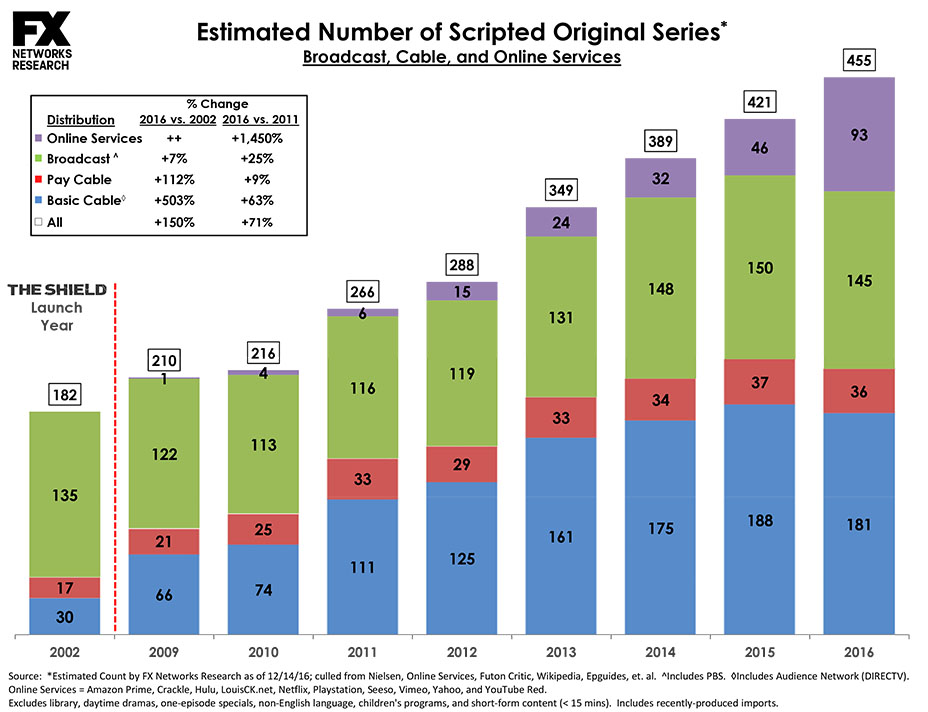