Continue to The Hollywood Reporter SKIP AD
You will be redirected back to your article in seconds
Skip to main content
September 25, 2019 6:15am
Logo text

In 2011, when Reed Hastings and Ted Sarandos invested $100 million in House of Cards, it was considered a seismic shift in television. Until that point, Netflix had been known for red envelope deliveries of studio-produced films and TV library content. HBO, when it launched in 1972, was the home of features from major studios. And when FX debuted in 1994, it did so with the familiar, too: repeats of favorites like Batman and Eight Is Enough.

So it’s perhaps no surprise that Comcast, Disney and WarnerMedia are looking for those proven hits — many of which they already own — to serve as the backbone of their new streaming services. These conglomerates made millions by licensing popular titles like Friends to Netflix — allowing Hastings and Sarandos to enjoy a head start in streaming and scale to 151 million global paid subscribers — and are now being forced to shell out even more to bring those shows home for their yet-to-launch platforms.

This has helped fuel the rising demand for series with sizable libraries as the biggest comedies of the past 25 years — Friends, The Office, Seinfeld and The Big Bang Theory — each have now scored deals worth north of $400 million from streamers including Comcast’s Peacock, Warners’ Bob Greenblatt-led HBO Max and Netflix. The latter spent north of $500 million over five years for Sony TV’s Seinfeld. Sony also scored a rich syndication deal to move basic cable rights to Seinfeld from its longtime home at Turner to Viacom in a move that sources say was larger — and more competitive — than its last pact. A new deal covering broadcast syndication rights is next up for Sony and its show about nothing.

But do sky-high prices for these TV libraries make sense in the long term? “It’s either buy it now or it’s gone — and we’re gearing up for war now,” one studio chief tells The Hollywood Reporter of the mentality around town. Adds Keith Le Goy, president of worldwide distribution and networks at Sony TV, “What’s driving the value is there are a handful of crown-jewel pieces of programming whose value continues to rise because they are a sure bet — sports is one area, the same is true when you come to look at a small number of these iconic shows.”

The price Netflix paid for Seinfeld — way up from its $20 million-a-year domestic rights deal at Hulu — escalated because of the show’s popularity, the streamer’s need for it after losing both Friends and The Office, and also because the pact is both exclusive and covers global streaming rights. (Netflix, unlike HBO Max and Peacock, already has 91.5 million paid subscribers outside the U.S.) Friends and The Office — leaving Netflix in 2021 and 2020, respectively — rank among the streamer’s most watched shows, topping its often pricey originals. The Office and Friends will move to Peacock and HBO Max, respectively, in exclusive — but domestic only — streaming deals as neither service is global (for now).

NBC’s Peacock Streamer Will Offer "Something for Everyone," But It's Also Playing Catch-Up

“Exclusivity of content is becoming more important,” notes Stephen Beck, founder of consultant group cg42, adding that it “means you have to be selective in where you choose to place your bets.”

Also driving the value of these libraries is that there is a finite number of proven hits like Friends that also have a large volume of episodes. (Friends boasts 236 episodes; The Office, 201; and Big Bang, 279.) And in a fragmented Peak TV era with more than 500 scripted originals vying for consumers’ attention this year, few shows are expected to reach the 100-episode landmark that observers say is key to driving library value. “Netflix needs to cater to a broad customer base that will help drive engagement,” notes analyst Paolo Pescatore at PP Foresight. “More importantly, these deals are all about retention.”

Comcast and WarnerMedia, in particular, are hoping that brand-name shows will help build wider awareness for their direct-to-consumer offerings. With The Office coming back home to NBC, Comcast is losing the revenue it would earn from selling the show to an outside player — like Netflix.

Instead, after paying profit participants, Comcast — which will be offering its cable customers its ad-supported Peacock streamer for free in April — hopes to lure new subscribers who can help offset the lost millions that would have come in via a third-party licensor. There is skepticism about the approach. “These conglomerates are pouring money down a bottomless well to hope beyond hope that people will subscribe to their streaming platforms,” snarks a second studio executive.

Adding to these eye-popping library deals is the race for proven IP, with many industry sources bemoaning that much of it — like Marvel — already is locked up under exclusive, long-term deals. Shows like Friends — which has proven itself in SVOD — are considered the next best thing.

With a number of top-tier shows locked into long-term streaming deals, many studio executives are being bombarded with incoming calls asking about other library titles. Popular shows like Modern Family, those in Dick Wolf’s massive 2,000-episode procedural catalog (none of which has streamed) and Mad Men soon will hit the marketplace. Other titles, like Glee and Community, will be taken out as many executives believe deals for favorites like Friends will have a trickle-down effect on the value of the next tier of titles.

“This is about quality shows finding a new audience, not about monetizing any old content that happens to be sitting in a library somewhere,” says Guy Bisson, research director at Ampere Analysis. “So the strong brand shows that can drive an offer, build an audience and potentially become a rebooted franchise are where the money is.” 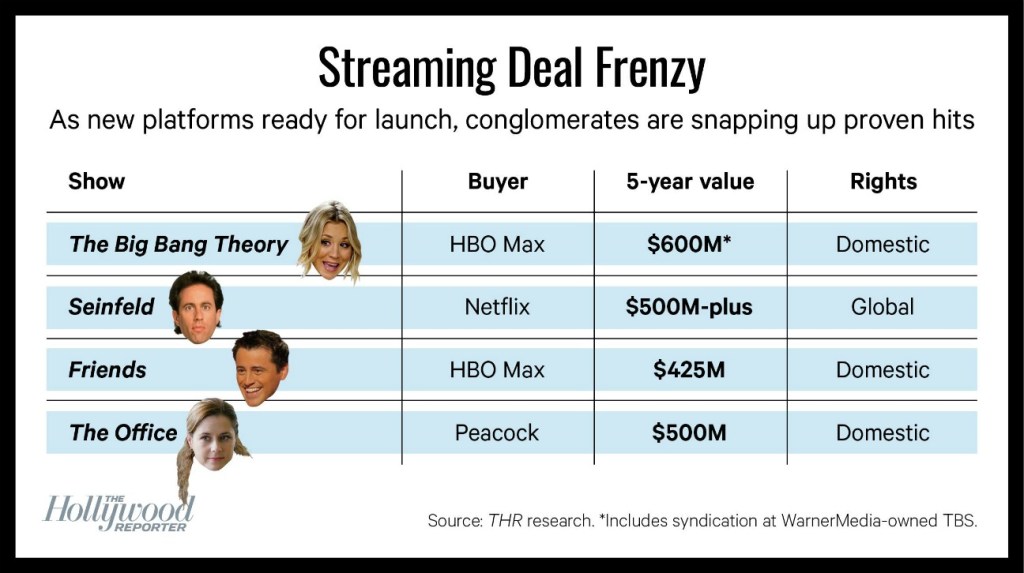