“The show’s message is paramount,” series newcomer Toby Onwumere told The Hollywood Reporter at the second season premiere in New York City on Wednesday night. “In cities like this, you see so many different faces and this show is a reflection of the world. The themes are topical, the message of inclusivity and liberty is really necessary right now.”

Onwumere stepped in as a series regular after one of the eight strangers — called “Sensates” — in the group, known as a “cluster,” departed the show between seasons.

“It’s a big cast, everybody’s under a lot of pressure, and it just got to a point where you had people that liked each other but just disagreed on a way forward,” executive producer Grant Hill explained of Aml Ameen’s departure. “It was very amicable, but it was hard to do.”

After Ameen exited the series, which hails from director siblings Lilly and Lana Wachowski, Hill said they needed to find a way to move on. So they cast Onwumere in the role of Capheus — a Jean-Claude Van Damme-loving bus driver in Nairobi, Kenya — and introduced the new actor during the two-hour Christmas special that released in December 2016. The new Capheus made his debut when, in a wink to the audience, pal Jela (Paul Ogola) commented on his new look.

Onwumere said viewers on social media were hesitant about the recasting at first, but that the reaction was overwhelmingly positive after the scene aired.

“We wanted to make him feel that he’s not involved but is involved because he’s coming into that role,” Hill explained of the cheeky moment. “It was one of those things that just worked. He came in and learned where we were and what we were going, but he also fit with the cast really well.”

After traveling around the world for seven months to film the first season, the close-knit and diverse cast took on 16 cities and 11 countries for an even more ambitious second season, further solidifying — and expanding — their bond.

“The timing of this season is particularly poignant,” Tina Desai — who plays love-torn Indian pharmacist Kala from Mumbai — told THR. “This is something we’ve experienced as people, not just as characters, that when you actually make the attempt to get to know who someone is, we’re all the same.”

She continued, “We might be culturally different, but we all think and feel the same way. If we can just respect that difference and then get over it and be more accepting, there really isn’t any problem. The problem comes around when you resist change. That’s what the show is doing: We all get past our differences and create something really amazing.”

“We don’t like to use labels,” he told THR. “People like to understand and categorize things in order to understand. The show gives people a hope or the possibility to see things differently and also to identify and cope with people they thought might not exist. That is the power of this show.”

“Lana doesn’t want to be shy in life,” said Miguel Angel Silvestre of bearing his body for the series. Silvestre’s Mexico City-hailing actor, Lito, took a risk with his big-budget career when he came out of the closet at the end of last season. “I don’t want to be shy in love, and I want to portray that. It’s a reality, that sex is more beautiful than violence.”

The series also broke barriers by featuring the first trans character whose storyline does not revolve around transitioning, with Jamie Clayton’s American hacktivist Nomi. Since the show’s launch, several other series, including Netflix’s The OA, have followed the path Sense8 paved.

“I’m just really happy the content providers are realizing it’s something that can happen,” Clayton told THR of telling LGBTQ stories. “That writers and more people realize we don’t need to be the punchline and we can exist, because we do exist. There’s still a lot of steps that need to be taken, but I’m thrilled to be a part of the progress we’ve had so far.”

Though the Wachowskis, who co-created the series with J. Michael Straczynski, have always worked side by side during their long career — resulting in big-screen feats such as The Matrix, Speed Racer and Cloud Atlas — Lilly Wachowski, who came out as transgender last March, stepped away from the show this season, leaving her sister solo at the helm.

“It was very daunting to everybody and Lana in particular,” said Hill of Lana Wachowski, who first came out as transgender in 2012. “They’ve directed every single day, pretty much, for their entire directing career. But Lana does what she always does. She sees it through and prepares herself and sort of finds her way of doing it. And she was remarkable.”

The result of her solo directing debut is a sophomore run that both raises the stakes for the characters and the relevancy for the viewers.

'Sense8': What to Expect From Season 2

“Lana is very prescient in that way,” Daryl Hannah — who plays the mother of the cluster, Angelica — told THR. “This season deals with even more topical issues. The world is going more towards this weird, fascist, racist, negative trajectory and we have to dig our way out of that sooner or later. It’s unbelievable how much has changed since we first started. Everything you’re seeing this season really pushes the message of inclusiveness, compassion and empathy. That’s really the theme of the show.”

Case in point: In the premiere episode when Lito and Capheus are being interviewed on opposite sides of the world and each is tasked with answering, “Who am I?”, the question invokes all the Sensates to chime in with a unifying, interconnected answer.

“That was written a year before Trump’s election,” said Silvestre. “I completely believe the worst can bring the best of a human being and in that scene, it’s pretty clear when eight people from eight different parts of the world gather together, you can expect the best from them. The result is always better than when it comes from only one culture.”

The second season of Sense8 releases May 5 on Netflix.

Lilly Wachowski at GLAAD Awards: "Love Is a Crucial Thing for Transgender People" 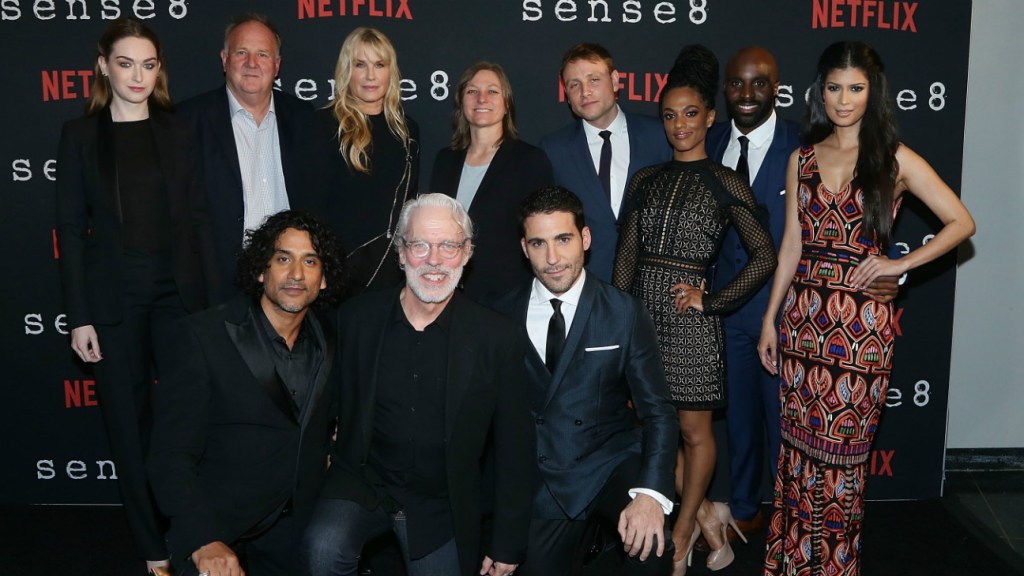