Skip to main content
October 2, 2016 7:00pm
Logo text
[Warning: This story contains spoilers from Shameless’ season seven premiere, “Hiraeth.”]
After the Southside of Chicago got a makeover in Shameless season six, the Gallaghers are now focused on improving themselves.
The Showtime dramedy’s seventh cycle kicked off Sunday with a season that is all about the family’s reinvention, starting with Fiona (Emmy Rossum) swearing off men and taking charge of her life. The premiere showed the quasi-matriarch stepping in for ex Sean (Dermot Mulroney) as manager at the diner, stopping herself from picking up Debbie’s (Emma Kenney) mess at home and physically dragging Frank (William H. Macy) out of the house — and she’ll only grow more as the season continues.
“Fiona is ready for a change, and no one is going to get in her way of seeing it through. She’s trying to apply the loyalty that she showed to her family to herself,” Rossum tells The Hollywood Reporter. “She decides the family should pick up the slack and share responsibility equally within the house, because it’s been pretty one-sided for a long time. She helped all these other people be a success — now it’s her turn.”

The Surprising Way 'Shameless' Will Tackle Polyamory in Season 7

As Fiona allows herself to be selfish for the first time, she will take herself off speed dial for the family’s day-to-day problems and make them chip in for rent if they want to stay in the house. Although the family’s feud with Frank is one of the focal points of the season, Rossum says a bigger fight will come when people don’t think she can be much more than a diner manager — especially Lip (Jeremy Allen White), which will be a good source of tension between the close siblings.
“Lip has always felt like the breadwinner and never considered that there’s a world in which Fiona could also be successful and make money and do something good for the family,” White says. “He’s proud of her, but Fiona is behaving in a way that Lip isn’t familiar with, and that’s a little scary because she’s abandoning the family and she’s acting erratically in regards to money and building her empire so quickly. He feels like his time is more valuable than hers so he gets a little overwhelmed.”
Notes Rossum: “The dynamic of Lip and Fiona’s relationship shifts because as he grows up, they’re on different paths with similar goals. Different scales maybe, but similar goals.” Part of that shared goal in season seven is the fact that both Fiona and Lip have sworn to stay away from relationships.
“It was really fun to not have to write romance stories for her this year, and to actually tell more of what Fiona is like outside of a guy,” executive producer Nancy Pimental tells THR. 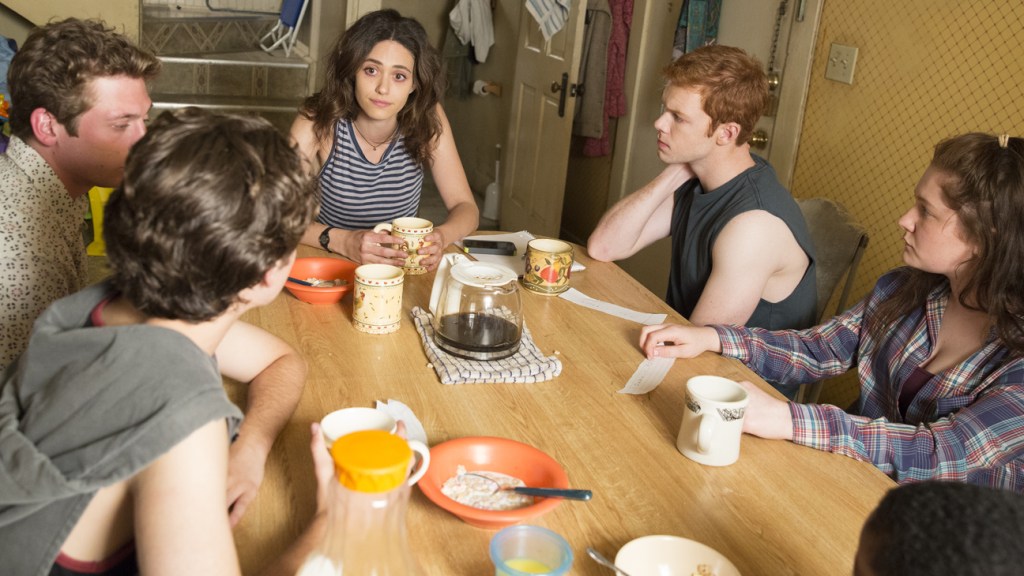 The new version of Fiona will embrace no-strings-attached Tinder hookups, and they’ll look different than previous relationships. “I don’t know why Fiona has only ever dated skinny white boys, so I asked for men of color to be brought in,” Rossum reveals. “We have a lot more of an assortment this year, which makes me very happy.”
Meanwhile, Lip is taking his rehab experience and applying the lessons to drugs, alcohol and the way he treats women. “He’s trying not to let himself fall head over heels so quickly,” White says. “He’s protecting himself a little bit more.”
Ian (Cameron Monaghan) will also make some changes after he discovers his boyfriend, Caleb (Jeff Pierre), is cheating on him with a woman.
“Ian is rediscovering and re-evaluating some of his sexuality,” Monaghan says. “There are certain things coming up in his interpersonal relationships that challenge his preconceived notions, which is kind of funny, considering how secure in his sexuality he’s been for such a long time.” 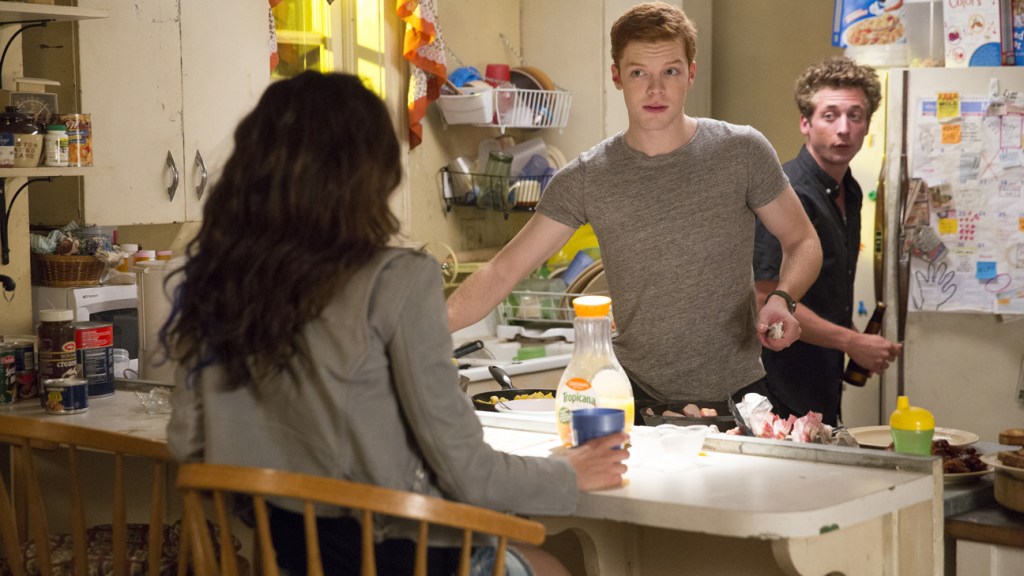 With that being said, Ian’s future could also include going back to the past. Even though his ex Mickey (Noel Fisher) is currently in jail, Monaghan isn’t ruling out a reunion. “Mickey was someone that he loved very much and holds dear in his heart, … but Ian has had to emotionally distance himself from the relationship so that he can just carry on with his life. But you know how those two are with each other. [If] they see each other, there’s going to be chemistry, and there’s going to be stuff that happens. The possibility is always out there.”
Unlike his offspring, Frank is looking for love — both platonically and romantically. “Frank feels betrayed. He loves being the patriarch, so he decides to find a bunch of people who need a family and make them his new family,” Macy says.
This replacement family kicks off a “Gallagher vs. Gallagher” theme for season seven. After surviving his time in the icy lake and a coma, Macy says that Frank feels “invincible” and “powerful” enough to take bigger risks and get even crazier. “There’s a lot of entrepreneurship going on. He starts a homeless shelter, and it’s working like gangbusters,” Macy reveals.
As for if Frank will have any sort of lasting relationship after Monica (Chloe Webb), Sheila (Joan Cusack) and Queenie (Sherilyn Fenn), Macy said that’s not what’s on the character’s mind this season. In fact, Macy is proud that “Frank is quite the Lothario” this season. “It seems like there’s a lot of women in Frank’s life, and I’m proud. I love to be playing this character that at 66 years old is getting laid on a regular basis. I love the way our show deals with sex, actually. It’s so straightforward and healthy — even in its sickness, it’s healthy,” he says. 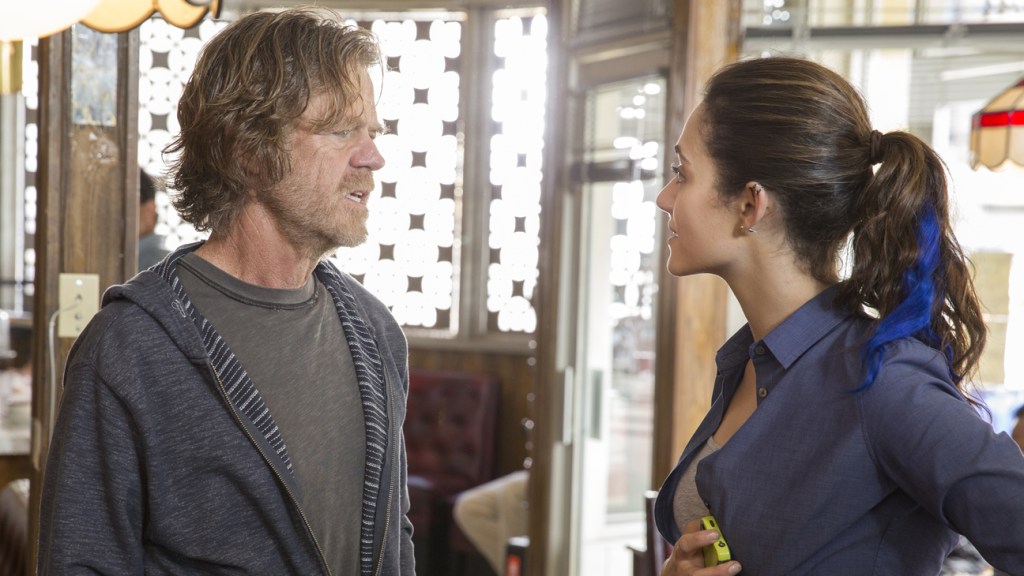 If Frank’s goal is get a rise out of his kids, Pimental says the character will likely be disappointed. “Frank is kind of invisible to Fiona now. She’s not even going to give him the satisfaction of being mad,” she says.
Adds Monaghan: “We’re so used to his bullshit at this point that we’re over it. We’ve thrown him over the bridge both literally and metaphorically, and we’ve tried to dump him out of our lives — but like a cockroach, he just keeps infesting and crawling back in.”
The only holdout could be Debbie (Emma Kenney), who is the most forgiving of the Gallagher clan. “As much as Debbie puts up a cold front toward Frank now it’s just because she doesn’t want to get hurt again — she doesn’t want to get continuously let down,” Kenney says. “Debbie uses Frank and Monica as motivation to be a better parent. She’s raising Franny the way she wishes she was raised.”
Even though Debbie is having “temporary regrets” about having the baby — the premiere finds her leaving Franny in front of a fire station before quickly changing her mind — she’ll do “whatever it takes” to help improve her daughter’s life. “She wouldn’t go back in time and not have a baby because she loves that baby more than she loves herself. Lip is honestly the only Gallagher that is genuinely supportive of her and trying to make her life better while maybe putting his own better future on hold.” 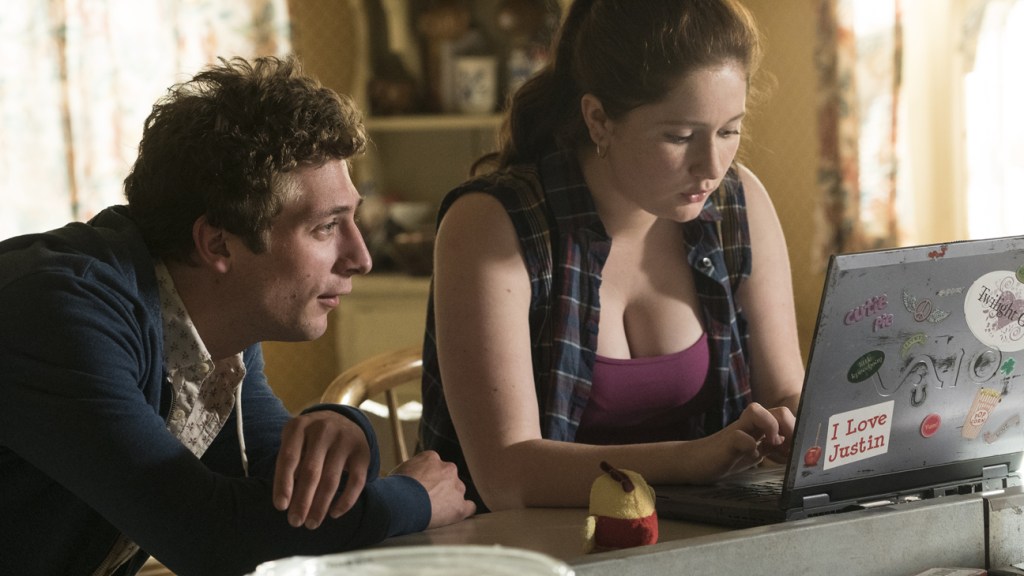 Meanwhile, Professor Youens (Alan Rosenberg) will hold up his end of the bargain and help Lip find a job, but that opportunity could lead to a different kind of relapse.
“Lip is ready to get out into the real world. He’s hungry for it. He wants to make money and I think that’s another addiction, like sex or drugs or drinking,” White says. “The concept of really making money and fast is really appealing to Lip, and he gets swept up in the startup world.”
Lip is able to be a little more hands-off with Ian now that his brother’s medication is under control, but that doesn’t guarantee smooth sailing. “As an EMT, Ian is seeing certain things about the job that are extremely challenging and sometimes very upsetting,” Monaghan says. “Working in a medical context, bad things can happen, and they can happen very quickly.”
Ultimately, Shameless season seven centers on Fiona and her “changing the log line of her life,” Rossum says. “She wants everyone to believe in her the way she’s believed in them. That she can be more than a diner manager who will never amount to much, who surprisingly has not been pregnant yet, and always needs a guy to boost her up. All Fiona needs is herself.”
Shameless airs Sundays at 9 p.m. on Showtime.