[This story contains spoilers from the season nine finale of Showtime’s Shameless.]

During Sunday’s season nine finale, Rossum’s Fiona Gallagher left Chicago’s South Side on a plane — her first flight! — as she took advantage of her latest chance for a new life.

To hear showrunner John Wells tell it, Fiona’s decision to move to warmer climates is born out of a realization that for her, most of her siblings are either grown or don’t need her as much as they used to.

How 'Shameless' Is Preparing for Emmy Rossum's Exit: "It Doesn't Feel Like Goodbye Forever"

And that’s largely true: Debbie has a career as a welder and has stepped up to help take care of the family — including her daughter; Carl is mulling a career in fast food — or returning to military school if his estranged girlfriend has any say over it; and Lip is preparing to be a father as he continues to stick with his AA program. As for Frank, he’s still the same proverbial cockroach who finds a way to survive (and annoy everyone).

Below, Wells talks with The Hollywood Reporter about how the season nine finale changed to accommodate Rossum’s departure, how the series will handle her departure and if season 10 will be the end of the Showtime favorite.

What went into the decision to have Fiona leave the state?

Everybody I know who leaves Chicago and the Northeast goes somewhere warm and decides it’s time for a different climate. Often, they come back because they miss it. With all the responsibilities Fiona has with her family, we felt she needed to step completely away so she could no longer be totally involved and could determine who she is on her own and get a fresh start. She looked around and saw that everybody was grown up — or mostly grown up.

In your mind, where does she go? 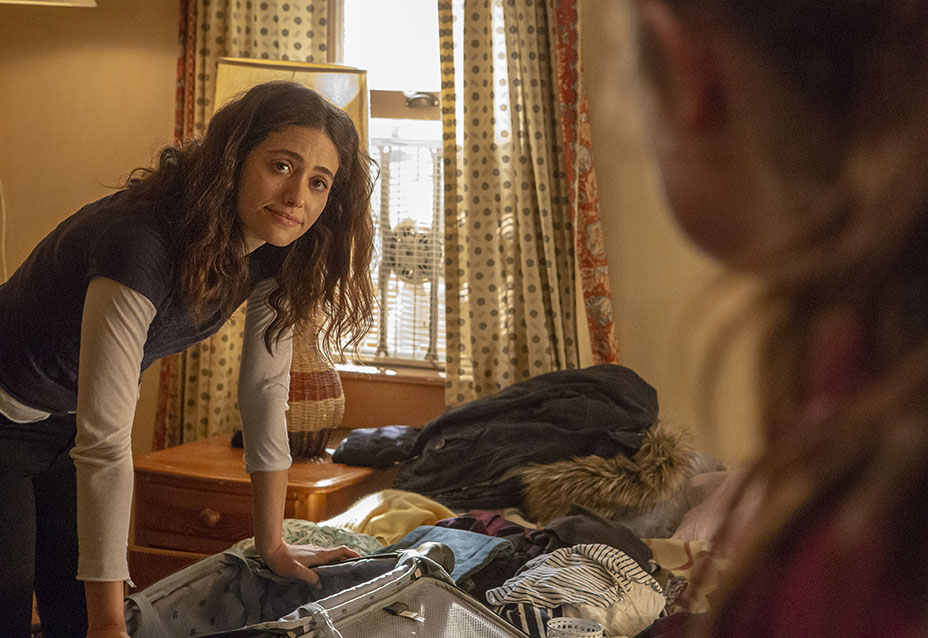 Fiona is gone but obviously won’t be forgotten. Will you reveal where she went and how she’s doing going forward? Or will it be an out of sight, out of mind experience from the Gallaghers, who didn’t notice Liam was rarely home?

I think she’s so central to the family and to the show that we’ll certainly keep her progress abroad alive. Some of it will depend on Emmy and if she wants to do a scene or a phone call here or there. It was so emotional with her leaving. We’d been together so long that it wasn’t the right moment to talk about it. We both said that her character wasn’t being killed off and was an integral part of the show, and that we’d note here and there how Fiona is doing as we kept her character alive. And even if Emmy is too busy and can’t make it work, we’ll still talk about Fiona.

Did you ever consider bringing Justin Chatwin back or did you not want to repeat bringing Noel Fisher back for Cameron Monaghan’s then-last episode?

It’s the second. I didn’t feel like we could play the same plot twist gag twice in one season. You can get away with it once but the second time is more painful.

You had to rewrite the finale and last week’s episode to address Rossum’s departure. What was your original plan for how to end the season?

We were going to be where she was at the end of episode 12 where she would have gone to AA and stand up and say, “I think I have a problem.” We would have stretched that out to the end of the season if Emmy had decided to stay. But she was making that decision early enough so we had time to modulate from episode seven on to what we wanted to do. Some things were already written and some things we rewrote as we went along. Emmy was always very straight-forward about not knowing what she wanted to do and when she did decide, she did it in plenty of time for us to figure out what we needed to do to make it satisfying for our audience and give her character the right kind of farewell.

'Shameless': How the Fall Finale Sets Up Emmy Rossum's Departure

Were the extra two episodes added to season nine to help accommodate her exit or was it unrelated?

That was a Showtime decision that was done before the season.

Will season 10 be another batch of 14 episodes that’s split in half the way this season was?

No. Right now, it’s going to be 12 episodes all in a row. Showtime felt that it wasn’t great for the momentum of storytelling and what the audience was expecting.

What were the last conversations you had with Emmy about a possible return in any capacity, be it an episode here and there or hearing her on the other end of a phone call?

I’ve not had specifics other than a general conversation about that we’ll always want her involved in whatever way she’s prepared. That includes coming back to direct or some other way. She just left and we finished three months ago. I know it sounds cliché, but we really are a family. Emmy was 21 when she started on the show; Jeremy Allen White (Lip) was 18; Ethan Cutkosky (Carl) and Emma Kenney (Debbie) were 9. This has been their family. Emmy’s departure was very emotional for everybody. She was anxious to get out into the world and see what else was possible for her. She wanted to spread her wings. She and Sam [Esmail, the creator of Mr. Robot and Homecoming] got married two years ago and often were not in the same place a lot, which is very difficult.

Fiona also doesn’t get to say goodbye to her best friend Veronica (Shanola Hampton). Why avoid that?

I’ve written a lot of goodbyes to characters I loved — George Clooney, Julianna Margulies, Anthony Edwards and Noah Wylie on ER — and you have to be careful about the tonnage of goodbyes because episodes can lose narrative drive. When we shot the last scene with them together, we had that moment with ourselves. In the script, Fiona wasn’t aware that she was leaving — or leaving so soon. We had to do all goodbyes with specific family members. But doing everyone, it gets to be too much of a good thing. 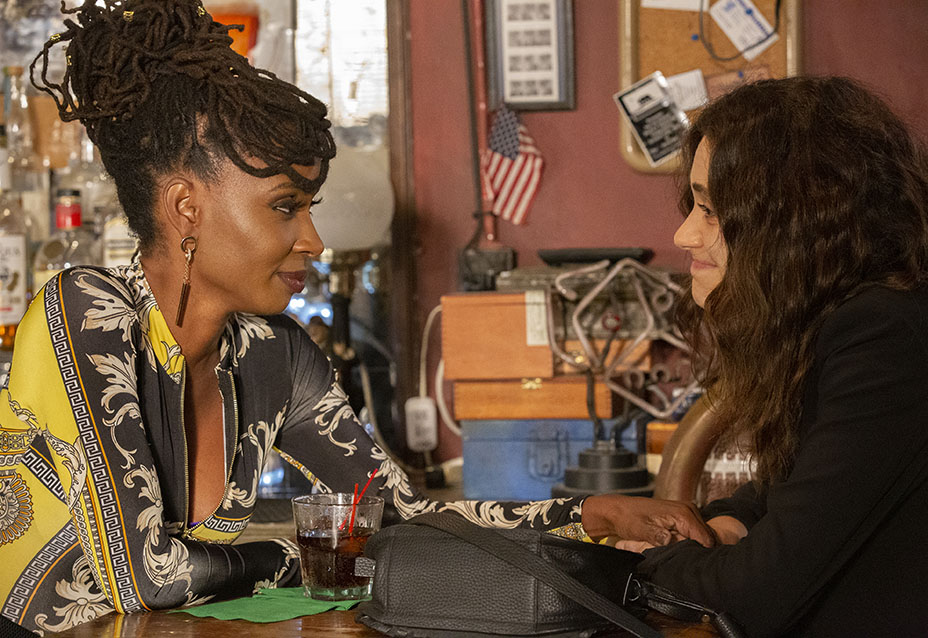 Even when he knows it’s unlikely he’ll see Fiona again, Frank still doesn’t give her the credit she deserves for raising his kids. Was that scene designed as a way for Fiona to know that nothing will ever change if she stays on the South Side?

Yes, that’s part of it. And also that Frank is angry. He feels people desert him. Monica did, his mother did and now Fiona is. He’s an intelligent narcissist who isn’t well developed emotionally and takes things personally. It was emotional to shoot because of Frank’s unwillingness to give her that thank you and satisfaction because he’s so wrapped up in his own stuff.

Speaking of Frank, Macy has said he’s interested in doing one, maybe two more years on the show — meaning a season 10 and possibly 11. Have you considered how the series could continue on should Macy decide to leave?

No. and I always want everybody to stay. We’ll deal with that if it comes up at the time. Things change. We were planning to do several more years of The West Wing when John Spencer passed away midway through the season and then it seemed impossible to continue. So you never know. But we will continue with this story the same way that life continues to go on — people make decisions: they leave jobs, go off to school.

Are you approaching season 10 as a final season?

Since season six, we’ve had certain things on the [writers’ room] board to make sure that, if it is the final season, that the audience will feel the story didn’t get cut off mid-flow. That said, the end of series feels like it’s going to be everyone walking away from the Gallagher house and having the feeling that they’re all still there. And Frank will always be there. He’s like a cockroach! 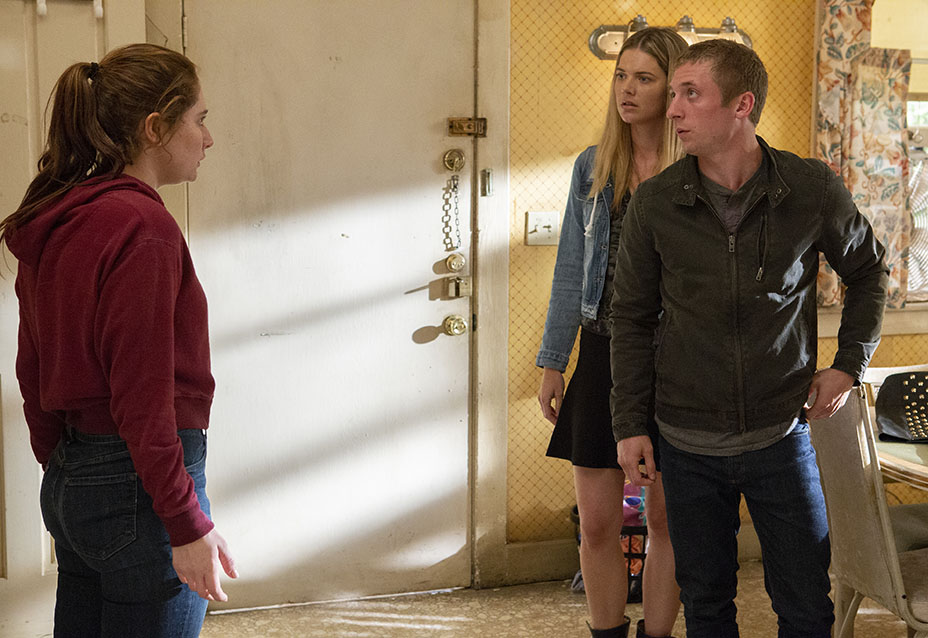 How will you help fill Rossum’s void? Will Jess Gabor return as Kelly? Will Kate Miner’s Tami return?

We will try and fill in the story the way that families fill in when people who are central to their lives leave. The writers’ room starts up again on Monday. But this show is a reflection of how life is: people we love and who are central to our lives leave and things change. In those instances, even though you don’t want things to change, they’re the fodder for good storytelling. It’s what makes it feel real.

Cameron Monaghan exited in the first half of season nine only to return as a series regular for season 10. Was this a contract standoff? Did he and Rossum not get along well?

I can tell you [the latter] is not true at all. He wanted to see what was out there. That’s what he said to me. I called Cameron to see if he’d come back for Emmy’s final scene at the prison and we ended up talking when he was on set doing that. I asked if he’d be open to coming back and he said yes because he had a great experience filming the finale and missed it. Sherry Stringfield left ER and returned two separate times and was on the show in three different periods.

'Shameless': Why Cameron Monaghan Left and Returned So Soon

How was the scene with Cameron and Emmy filmed? Were they there together and filming at the same time?

They were both there at the same time and filmed together.

Were there any conversations about Noel Fisher returning as Mickey in any capacity given his rekindled relationship with Ian?

We’ll never say never. Noel is doing a series in Chicago with Noah Wylie [CBS limited series The Red Line] and I don’t know what that likelihood is. He has a standing invite to return.

Will there be a time jump when season 10 returns?

I don’t know but a time jump sounds like a good idea! I try to finish the series and go away for a while. Finished editing 6 weeks ago. I try to get a break and come back with a  more impartial view of what we’ve done.

'Shameless' Renewed for Season 10 at Showtime