Shameless has enjoyed something of an improbable run. The dysfunctional family dramedy, based on a U.K. series of the same name, was passed over at HBO before David Nevins made it one of his first series orders when he arrived at Showtime in 2010. Nine seasons and one very fruitful Netflix licensing deal later, the Warner Bros. TV series from showrunner John Wells, starring Emmy Rossum and William H. Macy, ranks as Showtime’s most watched scripted original — averaging 8 million viewers per episode, across platforms.

But as the series approaches its landmark 100th episode (airing Sept. 30), Shameless also heads into unfamiliar terrain: Rossum, who declined to participate in the following conversation, is leaving the show. Wells and Macy (who has earned five Emmy noms for his role as the Gallagher family’s drunken patriarch) spoke with THR in early September about her decision to leave, the death threats that followed another fan favorite’s Shameless exit and why, ultimately, shows can outlive their original stars.

How Emmy Rossum's 'Shameless' Exit Could Shape the Show's Message

How are you both reacting to Emmy’s decision to leave the show?

JOHN WELLS She’s been considering it for a while. I tried to encourage her to come back, because we want her here, but she has other things that she is excited about doing — the Angelyne show [based on a Hollywood Reporter article] and a few things that she’s directing. She came to the definitive decision a few weeks ago. We’ll miss her. At the same time, there are a lot more Gallagher stories to tell.

WILLIAM H. MACY We’ll be empty-nesting a bit. I hoped that she would stay, but you get close to year 10 and start thinking about life post-Shameless. It’s horrifying and exciting.

John, how much have you prepared for a Shameless without either Emmy or Bill?

WELLS Not to suggest that I won’t miss Emmy, but the reality is that everyone is ultimately replaceable. Fifteen years of ER proved that to me. We went through three separate casts. The original Shameless‘ Fiona left after six episodes. The bigger surprise has been that we’ve gone on this long! We’ve done so many stories where we’ve felt like, “Well, this will be the end of the series.”

How do you anticipate Emmy’s exit will change the fabric of the show?

WELLS It’s painful, wonderful, exciting and a little frightening. We’re rewriting the end of this season. I’m rethinking episodes 13 and 14, so we can deal with Fiona leaving in a way that feels true to the show and also sets us up for more storytelling in the future. Everything that we’ll do with Fiona leaving and then hopefully returning at some point in the future — should Emmy choose to — will be based on that basic premise that these are damaged people who still really love each other and pull together to get through things.

MACY It’s sad, but people have been moving in and out, and they tend to come back. I can’t tell you how close these imaginary circumstances are to real life. It doesn’t feel like goodbye forever. Fiona’s got to come back. She’s going to leave clothes there! 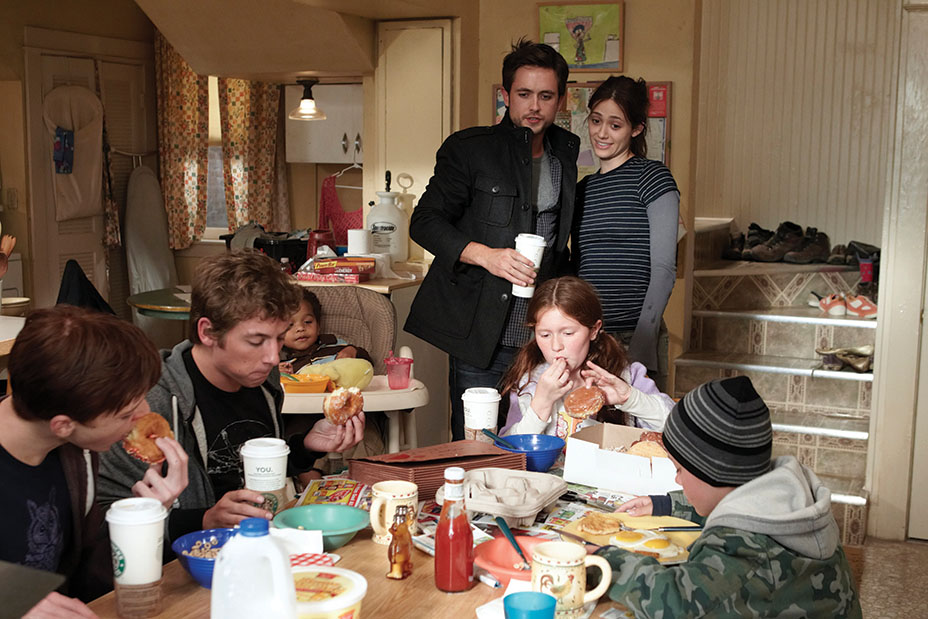 So you don’t plan to kill her off?

WELLS Well, we’re not going to hit her with a bus!

MACY The family is growing up and they don’t need “Mom” anymore. And Fiona was the mom. There’s nothing holding her down.

If you could bring back any former castmember, who would it be?

WELLS I was tempted to give everybody Noel’s home phone number so they could call him and say, “Why aren’t you coming back?!” instead of threatening me all the time.

The U.K. version of Shameless ran for 11 seasons and 139 episodes. Is that something either of you is interested in matching?

WELLS There’s no end of stories about maturing in your own family and the pull that families have on us. Placing that within the structure of people who are struggling economically and who have to depend upon each other to survive provides endless story material. It’s always a question of how long a cast is prepared to keep playing the characters. I could write this for another 10 years. The satirical underpinnings of this notion that there really is class in America is something that we could write about forever. Every day you pick up the paper and there are 10 other stories you could tell.

MACY I know there’s another 10 years of stories, and I’d love to see them. But when I think about acting them my back starts to hurt a little bit. (Laughs.) I know I want to do another season or two, and after that we shall see.

Bill, have you thought about how you’d like to see your story wrap?

MACY John once said that he doesn’t see a big splashy ending; the camera just goes from shining a light on the Gallagher house and it moves a couple of streets over and the Gallaghers just keep on going. Other than that, I’d rather Frank’s ending not be testicular cancer! (Laughs.)

WELLS Or a terrible brain tumor! When Anthony Edwards was making the same decision that Emmy did, to leave ER, we gave him [character Mark Greene] a brain tumor. And when I told him what the story was, he started the conversation by saying, “As long as I don’t have a brain tumor.” (Laughs.) 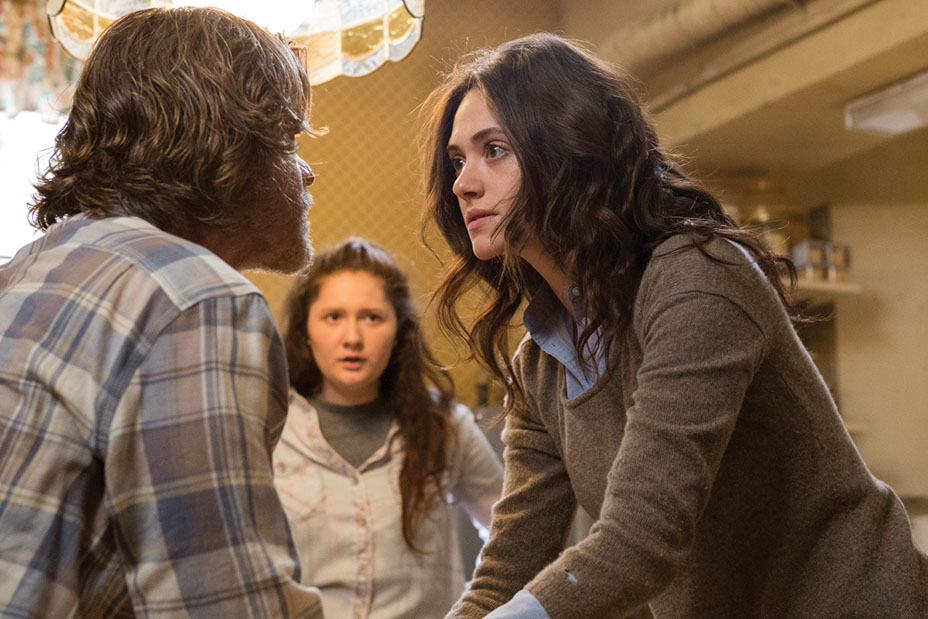 Given the show’s success, have you given any thought to a spinoff?

WELLS We had lots of opportunities on ER, and I’ve been approached about revisiting ER, The West Wing and Third Watch. But no, I’ve never been a big fan of spinoffs. The moment we all decide we’ve done what we wanted to do on the show, we’ll walk the camera off down the street and give the impression that if you walk onto the right block in Chicago, you’d find the Gallaghers.

Shameless has tackled a lot of important subjects over the years. What stands out the most?

WELLS I come from a family that has a lot of bipolar disease. I tried to humanize and not sugarcoat it and, at the same time, suggest that people are very capable of going on with their lives — even though it’s going to be difficult. And we’ve tried to be very honest about alcoholism and substance abuse and how hard it is to actually pull yourself out of it.

MACY And the way we deal with sex.

WELLS Someone said to me that people who don’t have a lot of money have more sex because it’s free — and I have found that to be true.

What’s the funniest note you’ve gotten from the studio or the network?

WELLS Frank stole a library book, and Showtime didn’t want us to do that. (Laughs.) We were like, “That’s the line? With everything else we’ve done?!” 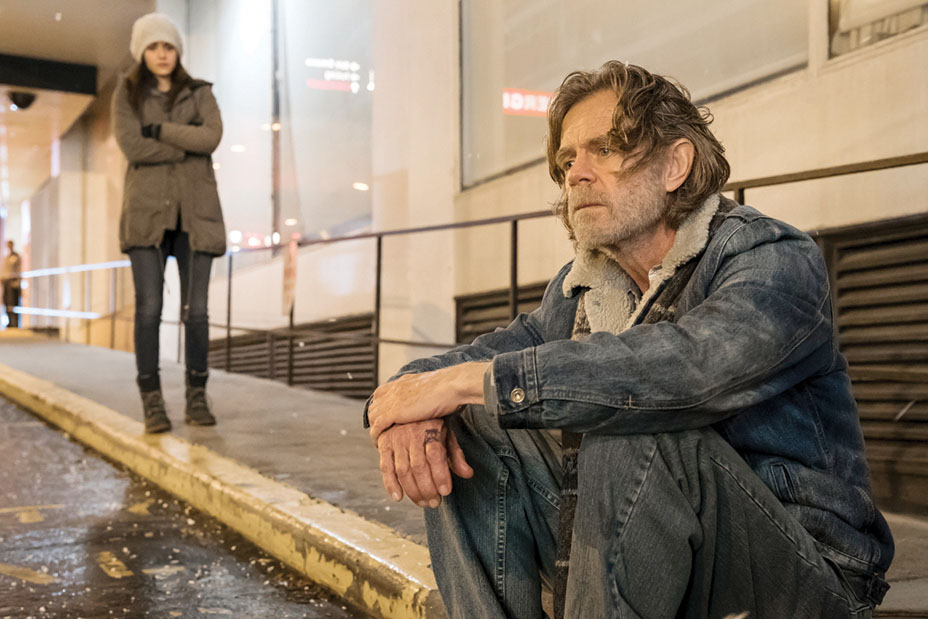 On a series that prides itself on frequent acts of depravity, cast members recall the times their characters really crossed the line.

“The three-way with Vee, her mom and husband, Kev [Steve Howey].”

“As Frank apologized for sleeping with Lip’s girlfriend, Lip takes a piss on his head. That’s when I got the show.”

“Digging up Aunt Ginger [Gloria LeRoy] in the backyard was pretty bad.”

“Ian disappearing after going AWOL from the Army only to re-emerge working as a stripper and rent boy.”

“When Debbie almost drowned a girl.”

“Carl accidentally shot an American bald eagle — and then shared that eagle with his family for Thanksgiving dinner.”

“Frank gave an insurance settlement to a guy who gives prosthetic limbs to kids and later asked for his money back.”