[This story contains spoilers from the Sharp Objects finale.]

In the final moments of “Milk,” Camille (Amy Adams) has begun to rebuild her life in St. Louis after the traumatic events of her journalistic trip back to her rural Missouri hometown. Her assignment to investigate the murders of two teenage girls in the area soon became a psychologically perilous voyage into her own dark past, and culminated in her mother Adora (Patricia Clarkson) being arrested for a string of crimes: the murders of both girls, the slow poisoning of Camille’s younger sister Marian, who died in childhood, and the near-fatal poisoning of both Camille and her half-sister, Amma.

In the wake of this ordeal, Camille has taken Amma home with her to the city, determined to raise and take care of her. Amma’s volatile behavior, her flashes of rage and manipulative power games all make sense in light of the revelation that her mother has been slowly poisoning her for years. Free of Adora’s influence, the sisters seem to be settling into a semi-functional domestic life together.

That is, until Camille discovers a floor made out of human teeth in Amma’s beloved dollhouse, and realizes in a queasy, surreal moment of pure horror that Amma killed the two girls, both of whose corpses were missing their teeth. A brief mid-credits scene shows viewers a glimpse of Amma committing the murders alongside her two obedient gal pals, and also reveals that Amma’s sweet new friend Mae (Iyana Halley) has become her latest victim.

To break down the events of the finale, The Hollywood Reporter caught up with showrunner and executive producer Marti Noxon, who also wrote the final episode of the limited series. Below, Noxon discusses the rationale behind that mid-credits scene, the changes she made from Gillian Flynn’s novel and why she has hope for Camille.

'Sharp Objects': Patricia Clarkson Is Keeping Her Character's Big Secret to Herself 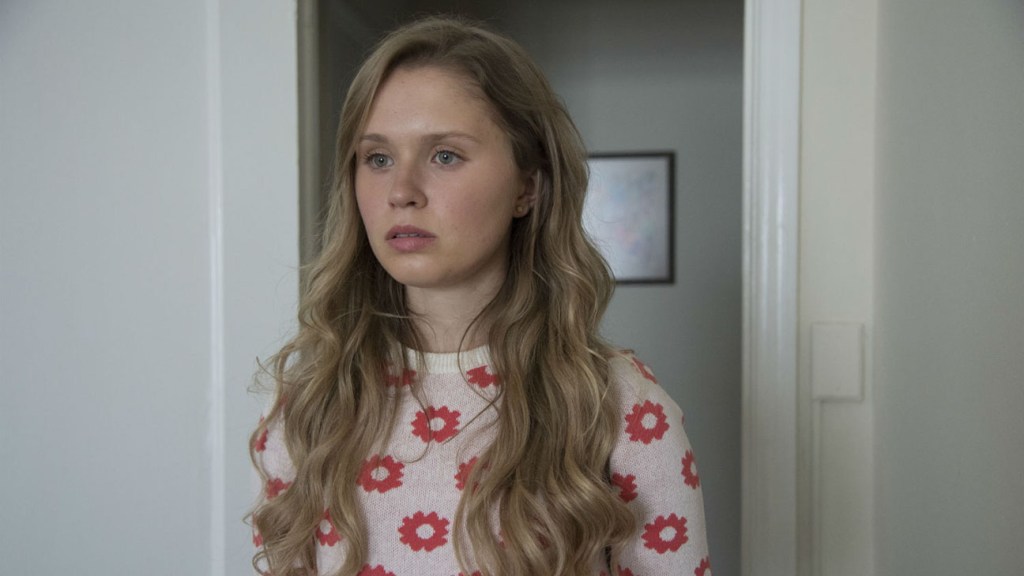 Camille doesn’t realize that Amma is the killer until the final minute of the show, and there’s no aftermath shown on screen. How did you settle on that structure?

It was something that [director/exec producer] Jean-Marc Vallee, Gillian and I talked about endlessly. Things happen very quickly in the final pages of the book, one thing on top of another, and it felt to me like we were missing some of the meat of the discovery. There was a lot of talk about how much coda we needed to have in the show, and what kind of coda. I really didn’t want to lose the impact of the book when you leave Camille in a state of shock, and you don’t get a whole lot of resolution. There was a difficulty in these two characters being so larger than life. Camille is a much more internal character, but both Amma and Adora are larger than life, and the end of the book really has this kind of fairy tale nightmare quality. I think there’s all of a paragraph or two about the details of [Amma’s crimes], that she had help, that her friends were coerced into it, but we felt that we wanted the meat of the story to be with Camille at the end.

Is that why you opted to have the actual footage of Amma and her friends committing the murders as a mid-credits scene?

Yes, that was something we found [after it was written]. It was scripted more like, “Is this Camille’s perception of what happened?” But it felt like it took something away from the performance that Amy was giving in that scene. Also, when you have a cut like that during a scene, it’s subjective, and when you put it in the credits, it’s more editorial: we’re saying, “This is what happened.” Given that the show is so stylized, we absolutely knew that the ending had to feel definitive, or else people would be like, “Is that just what she thinks happened? Ahhhh!”

When Camille willingly drinks the poisoned milk and the medicine, is she suicidal? Or is she just doing what she has to do to expose the truth?

I think it’s a little bit of both. There’s a part of her, now that she knows the truth, that would accept death. But the other part of her is gathering evidence, because she knows that this stuff has to be in her system in order to get the goods on her mom, in the situation she’s in. She’s pretty powerless. It’s that same ambivalence we see in her the whole time: When there’s something horrible at the root of your family, you want to know it, but you also aren’t sure you can survive knowing it.

In your mind, does Adora know that Amma is the killer?

I think she’s in denial about it until the bitter end, but my suspicion is that when all the shit goes down, she plays it safe and covers for Amma, having suspected all along that it might have something to do with her dear daughter.

And how about Alan (Henry Czerny), Amma’s father and Adora’s husband? How much does he know?

When you read these stories in the paper that seem so impossible, about people doing these things to each other, you always wonder about the partner or the spouse. It just felt to me like Adora and Alan had an agreement in their household, an unwritten agreement that he would try to keep her from doing harm to a degree, but at a certain point his job was to look away. I think the same was true with all the women in the family. Alan has a lot of self-loathing about that, but that’s the deal he made with the devil.

Camille and Amma’s relationship is more genuinely warm and sisterly onscreen than in the book. Why did you make that shift?

One of the challenges of bringing the book to the screen is that you have eight episodes for people to think about this relationship, what it’s there for, how it functions and if it plays on screen too creepily. Amma has a bunch of warning signs, there are a lot of signs that suggest she’s a girl in real trouble, and I felt that if we didn’t see another side of her, it would be so hard to avoid people just going directly to her as the main suspect. We made a concerted effort to make other characters in the show seem equally suspect, because while you’re in Camille’s head in reading the book, you can hide certain things better. I was worried dramatically, if Amma was too outrageous and never showed another side, you wouldn’t have sympathy for her, and you wouldn’t look away.

The moment during dinner when Camille notices Amma’s friend Mae (Iyana Halley) isn’t eating very much, is that just a nod to what’s to come?

It’s just a nod. With the dynamics of that meal, we wanted more of a sense of these new relationships than was played out in the book, specifically that Camille and Mae have a little bit of a connection. As we know, Amma doesn’t like it when people in her life like anybody else, or are nurturing toward anybody else.

Chris Messina Explains Why His 'Sharp Objects' Character Is Not Good At His Job, Either 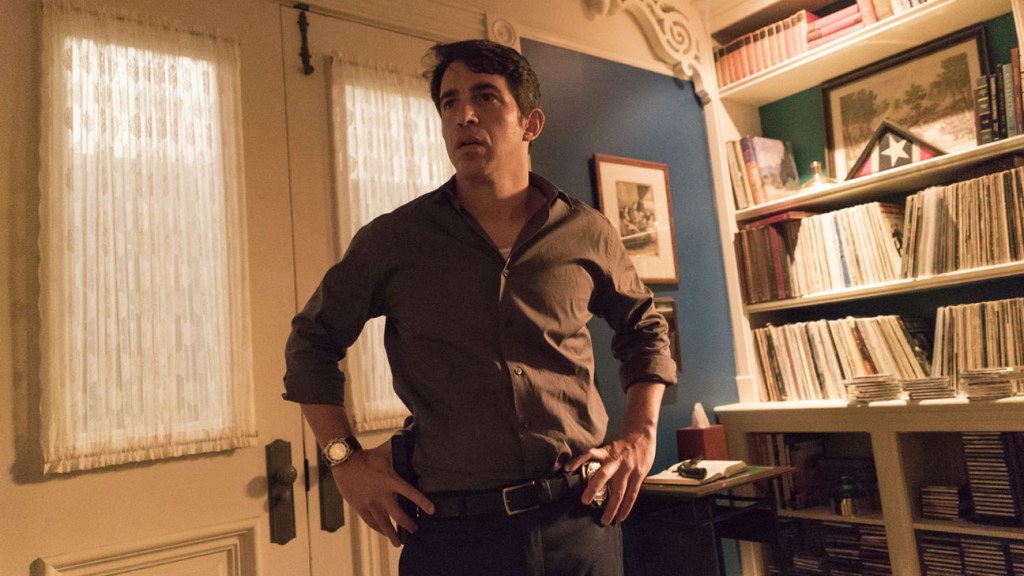 Curry (Miguel Sandoval) coming to the house along with Richard (Chris Messina) to save Camille is a big departure from the book. What inspired that change?

We had really built that relationship out from the book, although it’s clear there too she has a really profound relationship with him because he’s the only person who has true concern for her. We also really felt like, of everybody, she would make her cry for help to him. We wanted there to be some hope for Camille in the end, and to me that relationship was really the embodiment of the family you choose, not necessarily the family you’ve got.

Richard recoiling when he sees Camille’s scars is such a raw moment. What’s the significance of that moment for you?

That’s where this story is not romantic. The truth is, when you are carrying around a lot of damage that you haven’t worked through, you’re going to be attracted to people who can’t handle it, and Richard can’t handle it. That’s a little bit of the tragedy: one of Camille’s fears is that someone is going to see her and not accept it, but I think that we could have guessed that Richard maybe wasn’t the best choice for her. We both — me and Gillian — felt strongly that the primary relationship is never him, that the primary relationship is sort of Camille and the truth. And, of course, there is that warmth and love for Amma, because she is a true sister. She’s gone through the same thing that Camille went through, but her rebellion took a much darker turn.

What do you hope people take away from the show?

There’s a big question mark about what Camille is going to do with this revelation about Amma, but to me, she’s made stronger by the truth. The Camille at the end of the series feels a little more adult, and present in her own life, and even though there’s more truth to come, I still hope that people will feel like she’s been made more whole by knowing she’s not crazy.

Is a second season absolutely off the table?

It’s off the table in terms of, people are going on to their next projects, and it was a pretty hard A-team to assemble. It’s not hard to imagine from a story standpoint, because obviously we love these characters, but from a technical standpoint it seems like a long shot. 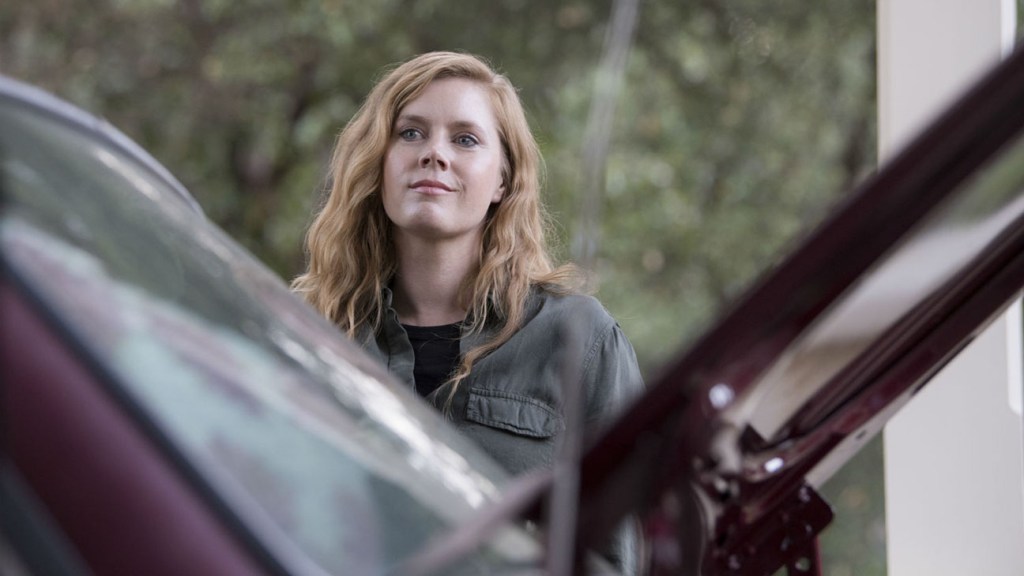 Do you have any news on a second season of AMC’s Dietland?

We should have good news very soon. We’re back in the room, we’re breaking story and we’re close. We’re very close. I love making that show, and boy does that story not feel over!

You started your TV career on Buffy the Vampire Slayer. What are your thoughts on the recently announced reboot?

I was excited to see that it was a reconceiving of the franchise, that it wasn’t just like, “We’re doing Buffy again, with Buffy.” And I also think it’s fun that it’s a woman of color writing a woman of color — that feels pretty righteous to me. Where I was a little bit skeptical at first, I’m now like, “Bring it on! I’m ready!”

What did you think of the Sharp Objects finale? Sound off in the comments section, below.