Continue to The Hollywood Reporter SKIP AD
You will be redirected back to your article in seconds
Skip to main content
July 5, 2018 10:15am
Logo text

Big Little Lies came first, with Vallee helming all seven episodes of the HBO series. He won an Emmy and widespread praise for his work. From there, he moved quickly — too quickly, he’ll tell you — from Lies to the same network’s Sharp Objects, based on a Gillian Flynn thriller. Amy Adams stars as a deeply wounded newspaper reporter named Camille Preaker, who returns to her hometown to report on the murder of one teen girl and the disappearance of another — and faces her own past. Again Vallee helmed every episode, eight in total.

Ahead of Sharp‘s July 8 debut, the Quebec filmmaker spoke with The Hollywood Reporter about his initial apprehension about diving into the exceedingly dark material, his gift for tapping into complex female characters and the fight he waged and ultimately lost.

Let’s start simple: Why this story?

It’s funny because I was wondering that myself: Why? [Laughs.]

Have you come up with an answer?

Yes, and the answer is it came from an invitation from Amy. We were working on Janice [a Janice Joplin biopic], and it didn’t work out, and she got the book [Sharp Objects], and she got excited. She sent it to me, along with the first episode, and I’ve never read a book like this before, and I was so surprised that she was willing to do this. Amy? Our sweet Amy would like to play Camille Preaker? I called her back and I was like, “You sure you wanna do this? I don’t know how to accompany you there. I’ve never met, never seen, never known anybody like this. How am I gonna help you play this character? But, I wanna see it. I’m curious.” So I went, “All right, yeah. You’re in, I’m in.” And here I am, two years later or whatever it is.

On the surface, Camille should be this very unlikable character, and yet you watch her and you find you have empathy for her. How do you ensure that happens, and are you conscious of doing so as you’re shooting?

It was there, it was on the page, before I started to work. I gotta give credit to Gillian Flynn, who wrote such a singular, dark story. And sometimes there’s beauty in the darkness and we get to care for this woman, strangely, as we turn the pages. She has a way to describe the world and talk about herself that is so different and so honest that you forgive her bad decisions, even though you want to tell her, “No, don’t do that! You’re not supposed to do drugs with your little sister. No, don’t go there, don’t sleep with an 18-year-old! No!”

So I have this bible, and we have Amy Adams’ face. There’s such a coolness and an intelligence in her face, in her eyes, in the way she acts. And all these elements added together, we get to care for her. She’s also not a pretentious character. But it’s funny because, at the beginning, the first week, she changed her voice, and she was speaking so softly and it was instinct on Amy’s part. And I had to go to her, because I wasn’t sure it was the right decision…

Were you effective? She speaks awfully quietly.

She just continued to do it, to just be that person and to speak softly. Even if she’s in the middle of a bar where there’s music playing, she speaks with this soft voice to the bartender, it’s almost whispering sometimes. And then when the voice does come out, there’s a reason, and it comes from deep inside. But I kept wondering if it gave the character something pretentious, but in the end I’m glad she kept it.

You noted how unfamiliar you were with a character like Camille. What did your personal preparation process entail?

A little bit of reading here and there, and there was a doctor friend who I consulted. And of course, I talked with Gillian, too, because she created that world and that character. Amy did her own work too. And it came so fast. The postproduction of Big Little Lies overlapped with the prepping for Sharp Objects.

Was the plan always to direct every episode as you had on Big Little Lies?

It didn’t quite work out that way.

Nope, I found myself directing all of them. The scripts weren’t ready [on Sharp Objects], so it was possible, but I knew it was going to be a tough ride for two years to shoot two TV series, all of the episodes, back to back. I shot, I think, 182 days in 20 months. 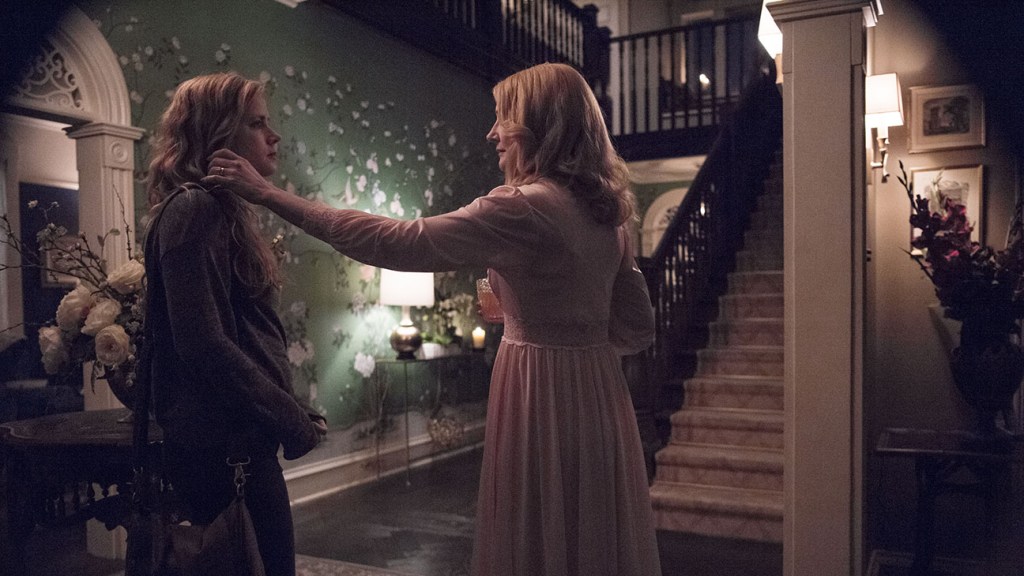 This is your second project in a row where you’ve expertly captured these rich, complicated female characters. What is it that you’re able to tap into in telling these types of stories?

You’re not the first one asking me this. But I’m just being myself. I’m not trying to overthink that aspect. It happens that they’re featuring female characters, but male or female, I can relate. I guess I’m also not afraid of going there. I’m an emotional person, and I’m comfortable dealing with emotional material. And I cry easily, so I’m a good audience. Sometimes I had a hard time saying “cut” because I’m emotional. So, yeah, I responded to the material. And I love being surrounded by all these great actresses. And it could be challenging at times, here and there, but it’s the same with a bunch of guys on set. We had Matthew [McConaughey] and Jared [Leto on Dallas Buyers Club], and that was challenging too.

Jason Blum revealed in a recent feature that he, as a producer on the series, had to organize a come-to-Jesus-style meeting before production commenced because of “creative differences” between you and Amy. What was that about?

Yeah, what was that about? I’m glad I don’t read the papers. [Laughs.] At the beginning, we just — I don’t know. You should ask him.

But the article implied the differences were between Amy and you.

At the very beginning, there was an issue about scheduling, and I was pushing not only Amy — I was pushing the production and everyone to push Sharp Objects so I can properly finish Big Little Lies. Maybe the meeting that he refers to was a scheduling thing, because I got pushy. I went to HBO, to Blum, to eOne, to Amy’s people, to Amy: “Let’s push! Let’s push another week, please!” Not even another week. I wanted to push a month or two, and of course that implies a lot of pain, but I was exhausted and I wanted more time to prep. That’s probably what he was referring to.

Were you successful in getting more time?

Not at all! Not at all! [Laughs.] I miserably failed, and they were all against me. I had to go to an intense therapy of calm and quiet to find myself and find peace. There’s a saying my mom used to say: “Let go, and let God.” So, I said to myself, “Just let it go, man. Just let it go. Everything’s gonna be fine. Just fucking do it. Everybody’s ready. Stop pushing. You’re gonna be fine.”

Anything else I should be asking you?

The less I talk now, the better. [Laughs.]