Forget about it? Never. The Sopranos creator David Chase and a litany of cast and crew members gathered Wednesday in New York City to celebrate the 20th anniversary of the premiere of the HBO series.

First loosed into the Pine Barrens of television on Jan. 10, 1999, The Sopranos centered on mob boss Tony Soprano, physical tormentor and mentally tormented in unequal measure, brought to thunderous life by the late James Gandolfini. The series spanned 86 episodes, six seasons and eight years on HBO, generating more than 20 Emmy Awards over the course of its run, alongside a number of memorable characters, killings and one-liners way too high to count.

Several actors from the series, including Edie Falco (who played Tony’s wife Carmella) and Jamie-Lynn Sigler (who played daughter Meadow), were on hand for red carpet interviews and a panel discussion at the SVA Theater in Manhattan to commemorate the 20th anniversary, the whole lot of them looking back on the decades of memories. Along for the ride: copious amounts of roaring laughter, a proud echo of the drama’s most darkly comedic moments.

“This is wonderful,” Dominic Chianese, who played Corrado “Junior” Soprano, told The Hollywood Reporter as he surveyed the red carpet, surrounded by a small army of fellow Sopranos soldiers. “It’s a very humane thing for HBO to do, bringing us together. We really liked each other. We worked as an ensemble, and any actor will tell you that in the theater and entertainment, our art form is so collaborative that it’s like a family. It’s like a family.”

“HBO sent me a box set once, and I binged the series, and I hadn’t realized until then how good it was,” added Jerry Adler, who played Herman “Hesh” Rabkin, a longtime advisor to the crime family. “While you’re doing it, you’re not aware of it. You know the writing is great, but you didn’t know that the style was there, and that the whole harmony was there. It was a family of actors doing their best work. It was just great.”

“There wasn’t a false move,” agreed Michael Imperioli as he reflected specifically on the shocking fate of his own character, Christopher Moltisanti.

In addition to castmembers, some behind-the-scenes Sopranos heavyweights were in attendance. Along with Chase, two other writers who went on to run critically revered dramas of their own were there: Mad Men creator Matthew Weiner and Boardwalk Empire impresario Terence Winter.

“This is really emotional. It’s surreal,” Winter told THR. “The idea that it’s been 20 years? It’s mind-blowing. I remember the day in 1999 when I got the call that I got the job [as a writer on the series], and it was life-changing. Absolutely life-changing, in ways I didn’t even know at that point. Getting back here, with the whole family? It’s utterly surreal.”

“I haven’t seen the show since it went off the air,” added Winter, a notion that was echoed by many others in attendance. “I’m sort of afraid to watch it. I keep fearing that maybe the stuff I wrote wasn’t as good as I thought it was. I don’t want to find out. But I have kids — my son is going to be 12 in a couple of months — so maybe in four years I’ll watch it all again with him. He’s going to have to rethink everything he knows about me: ‘My dad is a psycho!'” 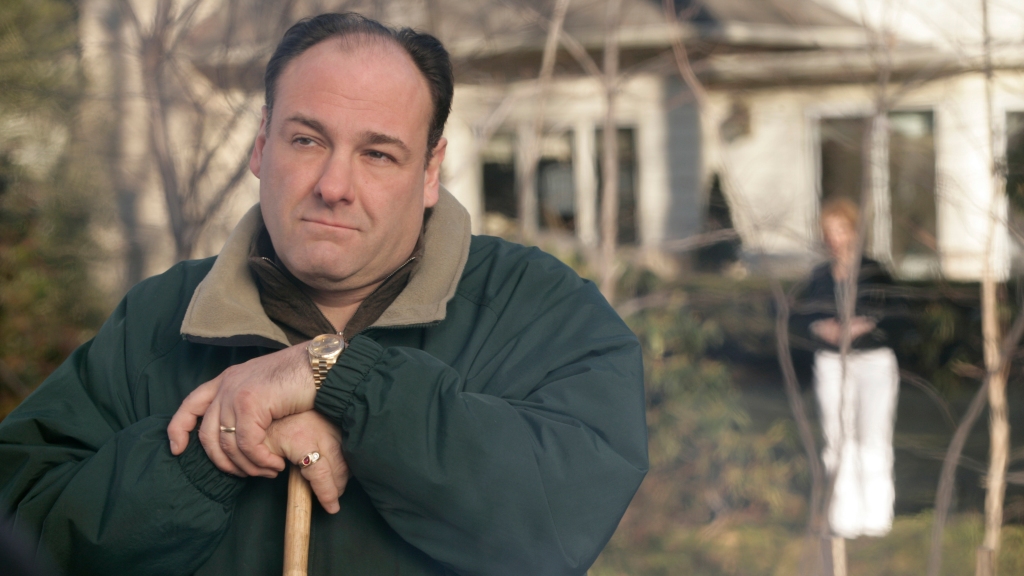 That refrain — “My dad is a psycho!” — was surely a popular one within the fictional Sopranos household, and it punctuates the sad reality of the 20th anniversary reunion. Despite the large number of Sopranos veterans on hand, there was one major absence: Gandolfini, the erstwhile Tony Soprano. The actor, who earned three Emmy Awards for his turn as the New Jersey crime lord, died of a heart attack in 2013 while traveling in Rome. Just as Gandolfini’s seismic presence defined The Sopranos, his absence loomed large, as his colleagues shared memories of their late captain.

“He’s always in our thoughts,” said Steven Van Zandt, the E Street Band musician who was once in the mix to play Tony himself before landing the role of Tony’s trusted consigliere, Silvio Dante. “He was so funny. He was a character actor in his own head, and that really set the tone for all of us, which helped make the show more of an ensemble. He was so used to doing movies, so he would try to quit the show every day. ‘That’s it! I’m done!’ He went from two pages a day in movies to having to learn seven pages a day. I swear, his brain would just fry. We would work from six in the morning until 10 at night, learn another seven pages for the next day, and when you’re not used to it? It was a shock to his system. But we would talk him into coming back the next day — most of the time.”

Across the red carpet, stories spilled out about Gandolfini’s shy and almost awestruck attitude toward the fame he found with The Sopranos, to the point that some believed he wouldn’t have enjoyed the reunion.

Case in point: Lorraine Bracco, who logged more screen time with Gandolfini than almost anybody through her role as Dr. Jennifer Melfi. She roared with laughter as she noted: “He would have hated this, which I would have totally loved! I loved teasing him, more than anything in life, and vice versa, too. He would have hated this: ‘What the fuck are you people doing? What’s wrong with you?’

“He was shy,” she added. “It’s funny, the way people want to describe him. As much as he was a big man, this was not his thing. He wanted to work. He did work very well. He was very committed. He came in and he knew his lines. He was like an animal at working. As soon as that was over, he couldn’t give a rat’s ass about [the fame].”

The fond memories of Gandolfini continued into the panel portion of the evening, as Chase and others gathered onstage to recall how the Sopranos sausage was made.

“The differences were not that huge, in the way he and I worked,” said Falco, remembering her onscreen husband. “Neither of us are very ‘actory,’ whatever that means. I remember when the second season was picked up, and he looked at me and said, ‘I don’t know what the hell we did, but apparently we have to do it again.’ He just never felt like he knew what he was doing, and I never did, either.

“We never talked about the characters and their backstories, or any of these things that a lot of other actors find helpful, but I never understood. We would look at each other, we would do the scene, and that’s what worked best. There was not a lot of Edie and Jim talking. It was only Tony and Carmela. When I was with him, he was only Tony. I didn’t know much about his personal life. We didn’t hang out. We weren’t particularly close, even. We were really just this pretend couple — but it felt as real as it possibly could, without actually being real.”

Over the next 90 minutes, the Sopranos cast and crew embarked on a discussion filled with countless gems for fans of the series, including but not limited to:

• Audition stories, such as this one from A.J. Soprano actor Robert Iler: “I think David really just liked the way I said ‘fuck.'”

• Weiner, who described himself as a Sopranos obsessive before landing a job with the series in its fifth season, opening up about the process of earning his staff position as akin to “Survivor: Long Island City,” which he was more than happy to win. “I feel like part of the reason I was there was to remind them what a big fucking deal [the show] was. I remember at one point in season five, David saying, ‘Really? Is this the promotion we’re getting?’ And I said, ‘David, they have rented every space except the inside of my eyelids. It’s everywhere! You don’t even know what it’s like to be another TV show. This is a cultural event!'”

• Chianese comparing his experiences making The Godfather Part II with his time on the HBO drama: “Wow, what a question. One was idealized on the big screen that dealt a lot with locations and feelings and genre. I think David talked about the inside of the people more. That’s the only way I can put it. One was kind of like an abstract painting, and David was like working with Michelangelo.”

• Pretty much every single sentence from Tony Sirico, who played Paulie Walnuts, fully hogging the spotlight whenever he spoke. For instance, when asked if he was ever afraid his character would die, he replied with Paulie’s signature attitude: “No. And I didn’t get whacked, did I?”

• Chase admitting that he nearly ended The Sopranos after season five, only agreeing to push forward into season six thanks to the following Hail Mary as told by Winter: “You said you were really considering it, and you opened up the floor for why we should continue. It was very cynical and very mercenary of me, but I had just signed my first overall deal with HBO. I was finally getting paid a lot of money, and here it was, slipping through my fingers! So I stood up, I locked the door, and I was like Jimmy Stewart at the end of Mr. Smith Goes to Washington. I went on a filibuster. I think I finally said, ‘If you need a break, if you’re tired, just take as much time as you want! Star Wars people come back 10 years later and do another movie. In fact, if you do that, you can come back and Janice could be married with a baby!’ And [David] went, ‘Ooh! That’s interesting!'”

• The happiest moment for Chase when he looks back on The Sopranos: “The people. Going to work every day and working with these people, solving problems together, and having a place to go and having a lot of fun. We had a lot of fun making that show. We all thought it was hysterical. That’s it: When it was all over, that’s what I missed the most. There are favorite moments and there were favorite episodes, but nothing quite matched that smiling atmosphere.” 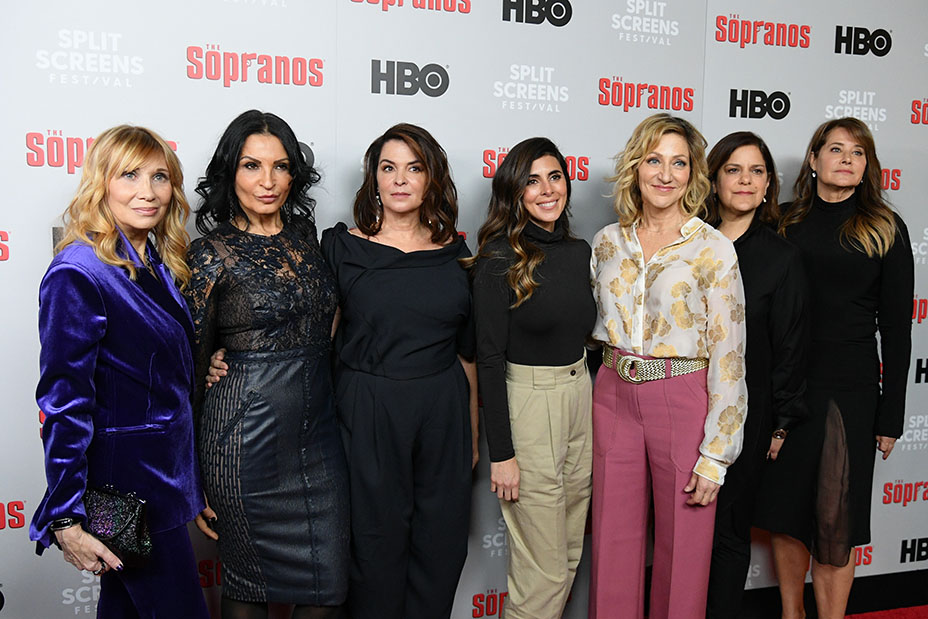 In honor of The Sopranos‘ 20th anniversary, HBO2 will be airing a marathon of the final season all day Thursday. The full series is available on HBO Now and HBO Go.