Netflix’s Space Force continues to build out its impressive cast.

The comedy, co-created by The Office‘s Greg Daniels and star Steve Carell, has enlisted Friends grad Lisa Kudrow. The streamer also revealed Wednesday that Space Force — one of the most anticipated scripted shows of 2020 — would premiere Friday, May 29. (Check out a first-look photo of the series below.)

Picked up straight to series in January 2019, Carell stars in the series, which is described as a workplace comedy centered around the people tasked with creating a sixth branch of the armed services — Space Force. Sources note the idea for the project was sparked by Trump’s June order to establish a space force as the sixth military branch.

Kudrow — who received multiple offers to star in broadcast pilots — will recur in the series as Maggie Naird, the wife of Carell’s Gen. Mark R. Naird. She’s a Washington Air Force wife who has sublimated parts of herself to her husband’s career for two decades. But as he takes on his biggest challenge, she is growing in a different direction.

Here’s the show’s formal description: A decorated pilot with dreams of running the Air Force, four-star Gen. Mark. R. Naird is thrown for a loop when he finds himself tapped to lead the newly formed sixth branch of the U.S. Armed Forces: Space Force. Skeptical but dedicated, Mark uproots his family and moves to a remote base in Colorado where he and a colorful team of scientists and “Spacemen” are tasked by the White House with getting American boots on the moon (again) in a hurry and achieving total space dominance.

Sources say Carell’s salary for Space Force — including co-creator and exec producer fees — sets a new overall record for talent, likely topping the $1-million-per-episode paydays that the castmembers of CBS’ The Big Bang Theory previously netted. With The Office ranking as one of Netflix’s most-watched acquired series — sources note that it often collects more viewers than some of its originals — the streamer stepped up after hearing Carell was ready to return to series-regular television and aggressively pursued the project. The show was not shopped elsewhere.

The Space Force date will cap a busy May for Daniels, whose Amazon comedy, Upload, launches May 1. 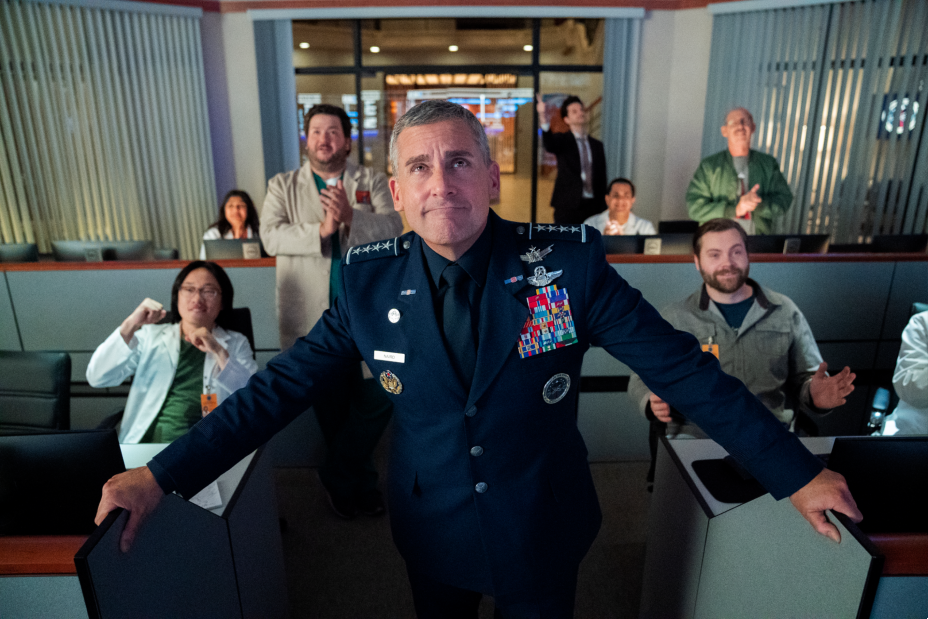