ABC’s Speechless is expanding its world in season three.

The 20th Century Fox TV-produced series launches its third season with a new time slot — on Fridays as part of ABC’s rebooted “TGIF” block — and with a big-swing trip to London. The single-camera comedy, created by Scott Silveri and inspired by the Friends grad’s late brother, continues to illustrate the ups and downs of the working-class DiMeo family (with leads John Ross Bowie and Minnie Driver) at a time when broadcast networks are making a concerted effort to program toward Middle America with broad multicamera comedies.

Below, Silveri talks with The Hollywood Reporter about how the family’s trip to London hits the Speechless sweet spot, casting guest star John Cleese and how his series plans to keep JJ (Micah Fowler) in the fold as he looks to graduate high school and attend college.

'Speechless' Heads to London With John Cleese in Tow

What was the pitch to go to London?

London is atypical in the location, in the themes, but it very much works as a Speechless episode. We dig in and learn more about Maya (Minnie Driver): where she’s from, her relationship with her dad (played by John Cleese) and what she was like when she was a spoiled little girl — which you wouldn’t guess from her current socioeconomic standing. We had a problem to solve at the end of season two: how is this family going to get the money to stay in their house? They’ve moved so many times over the years and they want JJ (Micah Fowler) to graduate from this school and their kids to stay there. They were hanging on by their nails as it was and now they’re out on the street and they have no recourse but to go to dad and ask for money. In so doing, Maya is going to bury 20 years of bad blood between herself and her father. It was fun to see her sucking it up. It was fun to see John Cleese as her dad slowly parsing out the love and see the two of them butting heads. 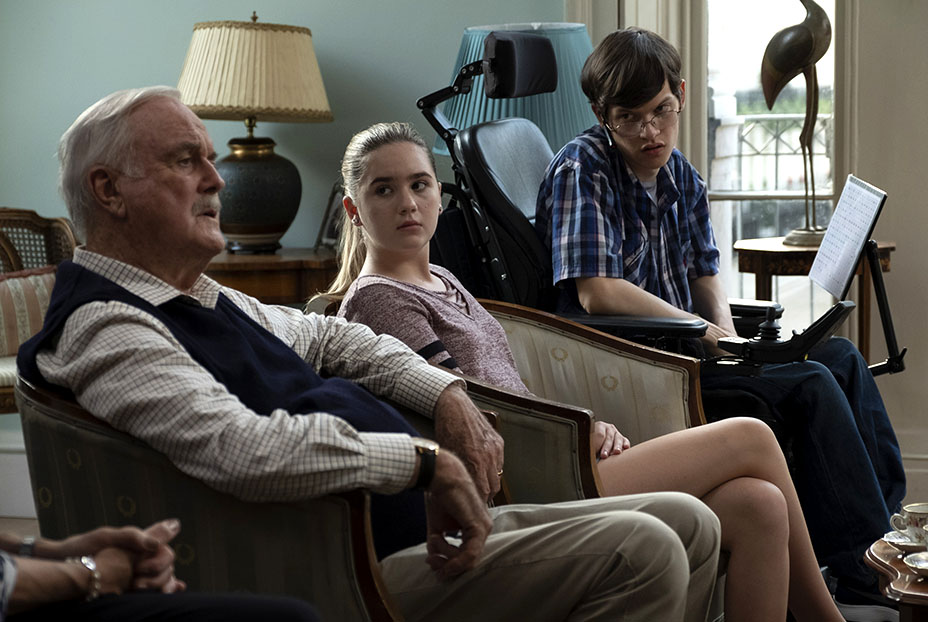 How did you wind up casting Cleese? How much of that was based on John and Minnie previously playing father-daughter on Will & Grace?

We created Cleese’s character as a function of Minnie — who was going to be her equal in terms of explosiveness, silliness, presence and volume of voice. We found the right man for the job. John and Minnie had worked together [on Will & Grace] and she pitched him — but he fit so well with what we were trying to do with the character. The characters had not spoken in 20 years and there needed to be fireworks between them. And that’s a guy that you want on the other side of fireworks. He is bombastic and can play pompous and ridiculous. There was really nobody else. Once I got him in my head, I started writing Basil Fawlty [Cleese’s Fawlty Towers character] lines. We were chasing him for our Thanksgiving episode last year and the timing didn’t work out. He just seemed like such a natural fit. I knew he would be funny. What I didn’t know was that they would have such good chemistry onscreen. There’s a real sweetness between them, and there is a paternal relationship there that really comes across. In addition to being hilarious, Cleese feels very real as her father, and the kids’ grandfather. You’re not just in it for the laughs because our show is never going to succeed if we’re just going after the laughs. We have to have an emotional weight behind it. I was standing by the monitors getting choked up: “Did John Cleese just make me cry?!” I’m used to him making me laugh but they really have something very special. I hope we can get him back for more [episodes] later.

Is there an overall theme of season three?

We’re going to flesh all these characters out, but the overwhelming umbrella for the year is this family is going to get to get a few wins this year. Last year, at the end of the year, Ray got dumped; JJ wasn’t able to graduate; and the family was turned out on the street. They ate their vegetables and this year they’re going to get a bit of dessert. I think they’ve earned it. It was never going to be easy for these characters because they have a certain number of hurdles between their economic status and JJ’s disability. It would be silly if it were a cakewalk from the beginning, but I think they’ve paid their dues and they get to have a bit of fun now. So hopefully that’s something the audience will enjoy. We’re enjoying writing it.

How else are you expanding the DiMeos’ world in season three?

In season three you want to round out the show a little more and show some new facets to the characters and bring in other people from their world. If Cleese is the template for that, I like the direction we’re heading. Minnie also had really good chemistry with Sarah Chalke [who played Melanie, the mother to Ray’s ex-girlfriend Taylor]. She’s a good foil for Maya, and we’ll have the two of them together again later in the season. We’re going to learn more about Kenneth’s (Cedric Yarbrough) family and get a love interest for him. He has done his work taking care of JJ but every time we paired him with another character, whether it’s Ray (Mason Cook) in the Thanksgiving episode or Dylan (Kyla Kenedy), we realized it’s silly to keep him in one little box with JJ, as much as we enjoy that. Kenneth is a guy who’s allowed to want things and is going to be looking toward the next year when JJ is off to college: what is his life going to be? We’re also going to learn more about his past.

JJ is going to eventually get into college. Have you thought about how that changes the show?

JJ is never going to get shipped off and be gone; he’s instrumental to the show. But we are thinking about ways where we can keep the character in their lives, and things that are appropriate for this unique kind of a person on TV. He has a unique set of needs and he is preparing himself to go off and be independent. He’s going to get that but we have our ways in mind where we can keep him close to the center of our show where he can also get the wings that he needs to continue growing as a character. And it will never be in a Pollyannaish way. The wings for him are different from wings for other people. We want to balance what’s realistic, what’s possible, and still have a lot of joy in it for him.

You’ve been a critical favorite but a bubble show for the past two seasons given that ABC doesn’t own the show. That said, with Disney closing in on the Fox deal — which would give them ownership of Speechless [produced by 20th TV] — have you gotten any indication that the show isn’t going anywhere?

I don’t think it would be reasonable to expect any assurances from them. That sale, which I’m told is imminent, is not a guarantee. But we don’t need a guarantee. If we were No. 1 in the ratings I’d take it but it doesn’t change what we do at all. Put us wherever you want on the schedule. We are trying to make the best show we can for ourselves and for the audience that follows us. So, no, I’ve gotten no assurances but I don’t need any assurances. I don’t need the carrot of another season, I don’t need the stick of cancellation. We’re holding ourselves to our own standard and trying to make something that interests us. We’ve always loved being something that parents can watch with kids. We’re just going to keep doing what we do. We have 21 episodes this season and we’re allowed to exhale a bit and not sweat those first couple of weeks.

Broadcast TV is making a big push for multicamera comedies that target the middle class following the success of Roseanne. But here you guys are with a family that was just evicted from their home as you continue to tackle timely subjects. Why do you think it’s been so hard to cut through? Is it because you’re a single-cam?

With every year that goes by it’s exponentially more and more difficult to attract eyes to a new show. Frankly, I’m glad we launched when we did because if we had to do it now I think it’s that much harder even now. There’s a reason why something that’s harkening back to an audience in the 1990s is going to attract a lot more attention, apart from the fact that there are a bunch of very talented people doing it. [Roseanne] was well done. I don’t begrudge them the attention that they got. We could stand to get a little more attention. But I also think people watch TV expecting things to be canceled any minute. So, it’s not until things are a couple years in, it’s like all right, I can invest my time in this. Because I’m not going to sit down and watch 15 episodes of something just to find out it got canceled last week. I’d like to think by season three an audience can see OK, they’ve got 40-something episodes, this is something that is worth investing my time in. 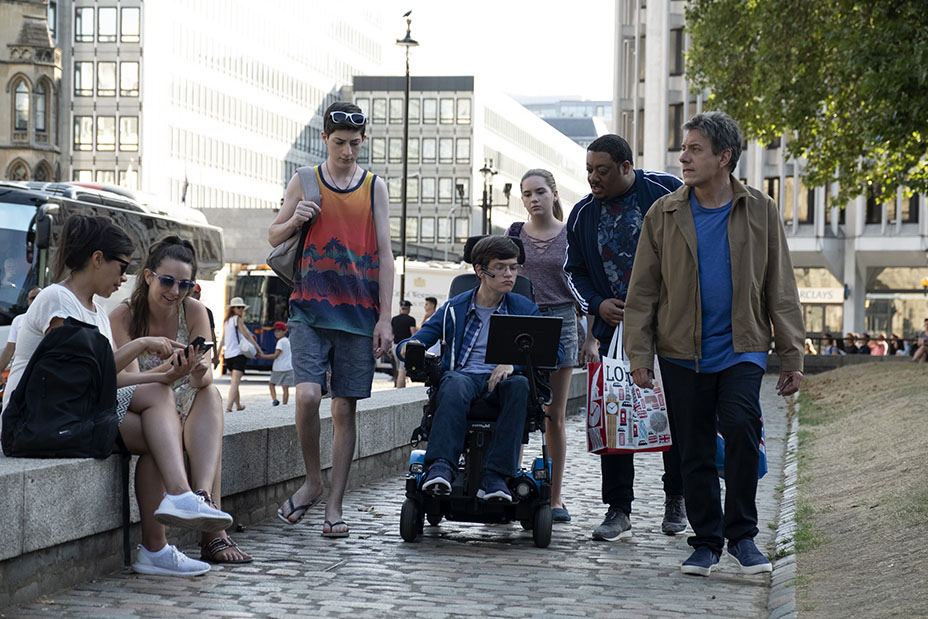 And Speechless is on Hulu so it’s easy to binge.

Yes! I think people are starting to find the show. Gone are the days where you sit down and watch all the new shows because there’s no trust in the networks. There are too many shows and things could be gone in a second so you don’t want to invest your time. We’ve been here for a couple of years and I think we have a future. So hopefully this is a time that people who haven’t seen us can check us out.

And at the end of the day, you’re a show about a working-class family.

Absolutely. If you just look at the poster, I don’t know that we scream that. I think people think it’s a certain kind of show and if I didn’t know the show I might look at it and say, “Oh a show with a kid in a wheelchair, I know what that is, it’s going to be soft, sweet and a lot of hugging and a lot of learning.” We avoid all those pitfalls. Hopefully people give us a chance and see that what we are is just a family show with universal themes. There’s nothing off-putting or too parochial about what we do. I’m very heartened by people who have disabilities or somebody in their family has disabilities who see the show and see themselves reflected in the show in a way that hasn’t been done before. But at the same time, I talk to a lot of people who have no connection to it at all — like, “Oh that’s not so different from me.” And if Will & Grace could do that I feel like we have a shot at doing that, too.