Star Trek: Discovery stunned viewers in its latest installment with the revival of beloved character Hugh Culber, played by series regular Wilson Cruz. After he was killed off in the first season in shocking fashion, Culber’s resurrection marks a huge step forward for the CBS All Access drama’s groundbreaking LGBTQ love story — right in time for Valentine’s Day.

The comeback of Culber, the ship’s medical officer and partner of Paul Stamets (Anthony Rapp), occurs in “Saints of Imperfection” as Stamets and Michael Burnham (Sonequa Martin-Green) travel into the mycelial network (a microscopic subdimension that powers the Discovery’s uniquely fast travel capabilities) to rescue Sylvia Tilly (Mary Wiseman), previously captured by one of the network’s natives. The reason for Tilly’s abduction: to kill a “monster” who had been lurking throughout the network — except this monster turns out to be none other than a frightened and weakened Culber, whose energy had been inadvertently transferred by Stamets into the network shortly after Hugh’s death. Despite his long-lost love’s traumatized state, Stamets is able to convince Culber to come home to the Discovery, the possibilities for their shared future wide open.

Cruz and Rapp talked with The Hollywood Reporter about the events that led to Culber’s resurrection, what it means for the Star Trek franchise’s most prominent same-sex couple and much more. 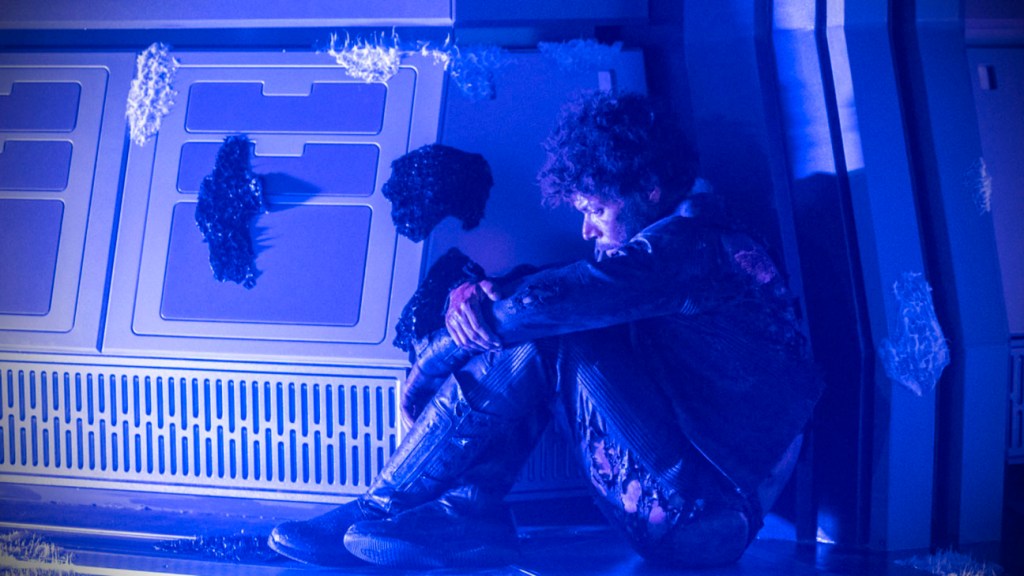 Before getting to Culber’s return, let’s start by talking about his death. What were your initial reactions to finding out he would die in season one?

Wilson Cruz: Tears! (Laughs) I was shooting my first day on the second season of 13 Reasons Why. I had just finished doing my makeup and had received the call from our producers. I was really disappointed; I’m not going to lie to you. I had to pull it together and get to work. The fan response has been unrelenting for a year. I love the passion people have for these characters and the show. It’s been overwhelming to keep people excited and engaged and not worried too much about the fact that Culber was gone.

Anthony Rapp: When I first got to meet the producers about the show, I was told that things were going to go sideways for Stamets, but they didn’t get specific. It wasn’t until we were shooting the episode [before Culber’s death] that they reached out to me personally to let me know this was coming. We were also told pretty soon after that there was going to be a way for Hugh to come back. Processing all that information in little drips was certainly intense. But I kept trusting and leaning into the quality of how it was going to get handled.

How did you feel when you found out exactly when and how Culber would be returning?

Rapp: Initially, I didn’t know how, and I didn’t want to know how. Since Stamets didn’t know how, it wouldn’t help me play in the present. I didn’t know until I read the script for this episode. I was very satisfied. I felt it rang true to thematic threads that have been running through the story. It made sense in a fantastical way but felt grounded in real science.

Cruz: My first concern was if we were going to give the fans a return that is worthy of this show and character. I wanted to make sure that it was as epic as I was being told it would be. And I think we have delivered on that. Because I know where we’re going with the story, I feel like we really set up the rest of the season for this relationship.

While this marks Culber’s official return, this is not the first time we’ve seen him since his death. He’s appeared in the network before to comfort Stamets, and Stamets even remarks in the season premiere that every part of Discovery reminds him of Hugh. How does your story embrace the grieving process?

Rapp: Stories about loss and grief are really important to me. I lost my mom when I was in my twenties, so it’s always really meaningful when those types of stories get told. As the season went on, things were so crazy with the plot; it made sense there was no time or space for Stamets to really deal with the loss. He was in this crazy mycelial land and had this moment in the network to help bridge the gap initially. But the real consequences didn’t come until this season, and I’m so glad it got to come full circle. There’s an opportunity to really explore loss and peer into the abyss of the unknown. Plus it’s grounded in some real science with how energy transforms and moves throughout the universe. The writers have found a way to do it that resonates and is really satisfying to play.

Cruz: Paul was very much in mourning; he was overwhelmingly affected by this. We couldn’t really show that at the end of the first season because we were still trying to win this war and save the universe. Once that was over and you’re left with just the emptiness of that bed, your life is completely different. There’s no way to avoid the grief and loss.

The crew finds Culber after he has spent quite some time in the mycelial network. What is his emotional state then?

Cruz: By the time we see Culber, the war [from season one] has been over for about nine months. In that time, he has been stuck in this place not knowing what’s going to happen to him, except for the fact that he’s being eaten alive within the network. He’s trying to do everything he can to keep himself alive in the hopes that the Discovery will see him when they come through the network. He is desperate, scared and has no clue what is possible for him. That’s heartbreaking and overwhelming. I wanted the audience to understand that at the first moment that they see him again.

Showrunner Alex Kurtzman has said that faith is an overarching theme of season two. As mentioned, Stamets uses mycology to substantiate his belief that nothing ever truly dies. How does that inform the way he grieves Hugh?

Rapp: There’s a moment in finding Hugh where Stamets thinks, “Was this a hallucination, or was it real?” He came to the scientific conclusion that our energy doesn’t die; it has to go somewhere. As a scientist who believes in biology, it would make sense that the solution is in this network that’s connected to everything. It doesn’t invoke a mystical type of fate with any sort of God figure, but it’s more about faith in the natural order of things. I can see how Paul would be able to embrace the notion that the natural order would mean there’s a place for living things’ atoms to transform in the mycelial network. 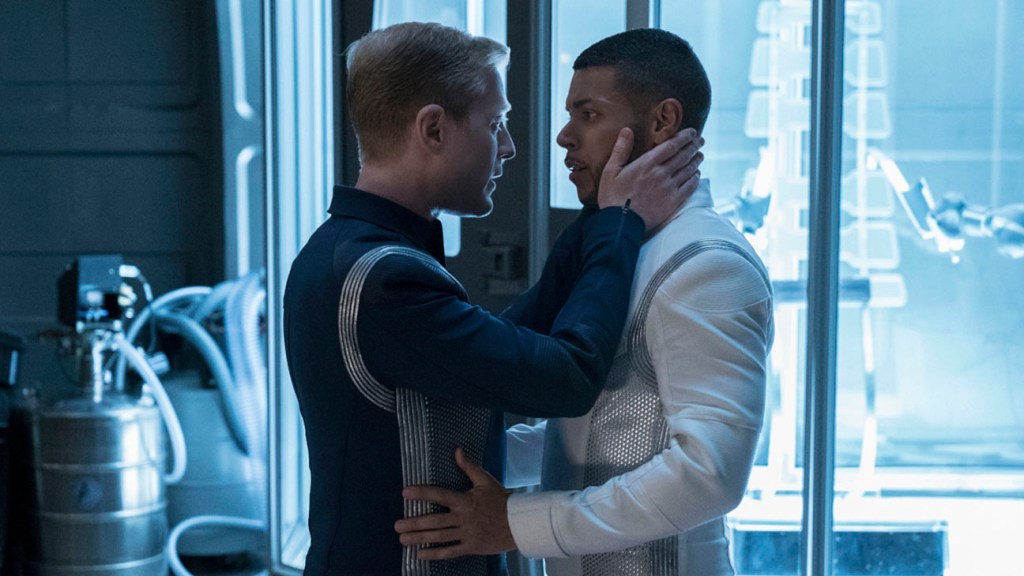 There’s a moment in this episode where Stamets finds Culber isolated, relaying a memory to get Culber to trust him and take him back to their universe. What does that scene say about their relationship?

Cruz: At that moment, Paul realizes that Hugh has imagined him for all of these months. There have been moments where he thought Paul was there, and he wasn’t. So he needs to remind him of who he is and who they are to each other. He chooses this moment and says that was the moment he fell in love with Hugh. It was the moment where he saw his heart and humanity. At the base level, that’s who Hugh is; he’s this incredibly compassionate and lovingly gentle person. I think Paul is trying to bring him back to that moment to remind him of not only who Hugh really is, but who Hugh is to Paul. He needs to trust him again so that he can help get him out of there.

Stamets and Culber have made history as the first major same-sex couple in the franchise. How do you feel this new beat in their story imparts the theme of love to the fan base at large?

Rapp: I absolutely embrace the fact that our relationship is the first-ever truly explored same-sex relationship in Star Trek history. I honor and love that this is the case for us. At the same time, the particulars of our relationships, the ups and downs that we go through, are specific to our relationship. I don’t want them to be seen as speaking as gospel for all relationships. I do think one of the things that is really meaningful is that it shows LGBTQ relationships as complex, rich, and explored with a lot of integrity and depth. Because it’s science fiction, we’re able to take experiences like coming back to life and really question what it means to be alive and human. What does it mean to be in a relationship and have memories? I hope any fan can find humanity, depth and something compelling about what our characters are going through together.

Cruz: I feel like what’s important about the very existence of this relationship is that it allows LGBTQ people to imagine and understand that not only have we always been here, but that we will always be here. Part of what’s powerful and what has always been powerful about Star Trek is that it helps us imagine the world that we want, as we would like it to be. It’s important to include LGBTQ people in that vision. We want to be responsible to the story and to the community. I think about how a young LGBTQ person of color who watches this show can now imagine and know that they’re valued and part of the future.

What can Discovery fans look forward to seeing now that Hugh is alive again?

Rapp: We find a really interesting way to explore the idea that if you come back [to life], what is that like? What you’re going to learn is that he’s Hugh, but it’s a new body. What is it like to be the same person inside of a new body? And what is it like to have your consciousness be in a different realm for a while? It’s like someone coming out of a coma. What is it like to live and breathe again in this universe when you’ve been living and breathing in such a traumatized manner?

Cruz: We will find out not just about who are they are to each other, but who they are individually. Last season, it was fair to say that Culber was very much in service to Stamets’ ambition. But this season, we really get to see who Hugh Culber is, why he does what he does. I want people to imagine what it’s like to have gone through all of that [in the network] and to now be back where it all started. That experience has affected how he feels about his life, career, relationship and who he is. We will learn there are consequences for him, as there should be. We don’t pull any punches, and I think we deliver a love story that is worthy of this relationship.