Star Trek: Discovery‘s search for Spock is near its destination.

The promo for Thursday’s episode of the recently renewed CBS All Access drama reveals Michael Burnham (Sonequa-Martin-Green) coming face to face with the famous Vulcan. Though this is the first official appearance of Ethan Peck as Spock in Discovery, his presence has been felt throughout the current second season, a part of the show’s most prominent mysteries and relationships.

Similar to his fictional counterpart, Peck’s name has been on the mind of Star Trek fans for some time. Showrunner Alex Kurtzman last summer revealed that the iconic character would be joining Discovery in its sophomore run. A month later, Peck was tapped to don the distinguished Vulcan ears. Peck, the grandson of acclaimed To Kill a Mockingbird actor Gregory Peck and known for his role in the television adaptation of 10 Things I Hate About You, has big boots to fill, considering the lauded performances from predecessors Leonard Nimoy and Zachary Quinto. But if the character’s new look is any indication, Trekkers are about to see an entirely different Spock — this season at least.

Speaking with The Hollywood Reporter ahead of his official debut, Peck exhibited Vulcan levels of discipline regarding his future with the franchise. “I wish I could comment on that,” he said when asked about a season three reprisal, “but I can’t.”

Peck could, however, speak at length about the pressures involved in living up to such an iconic character, meeting with Nimoy’s family to better understand Spock, his own legacy as the grandson of the erstwhile Atticus Finch and beyond. 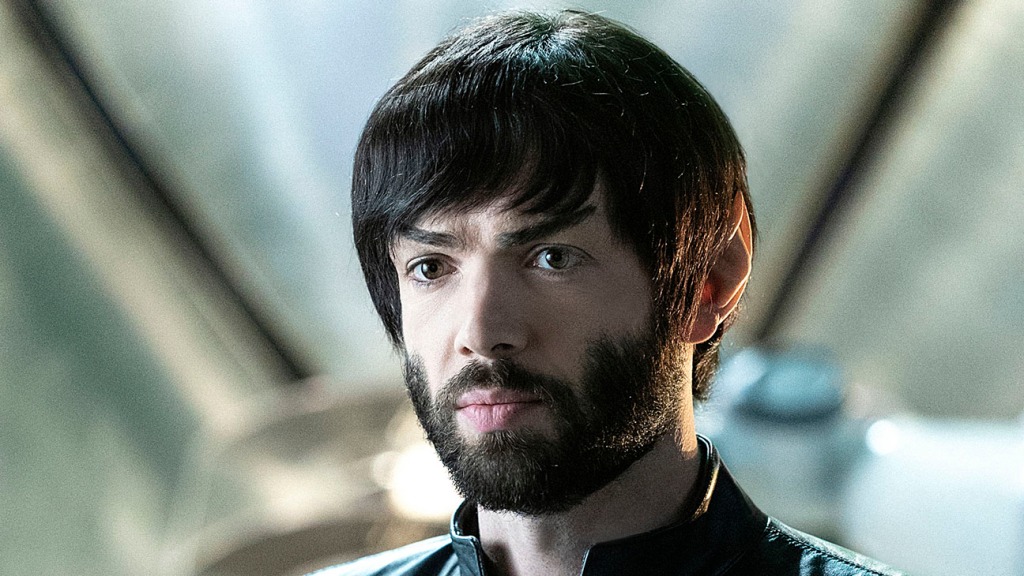 You didn’t know you were going out for Spock when initially auditioning for Discovery. How did you approach the character at first, not knowing who he was?

The person I was given in the sides was described as an alien, an Andorian actually. It seemed like he was trying to keep a hold of reality, spinning off into this abstract narrative within his mind. Someone who was being exposed to inner demons, as if he was waking up to his emotions for the first time and they were totally overwhelming. It made me think of someone who was having an existential or psychotic break. I haven’t personally had an intense drug trip, but it reminded me of people who are under the influence of psychedelics. He’s trying to ground himself and keep himself in his present reality.

What elements, if any, have you pulled from Nimoy and Quinto’s performances?

With all due respect to Zachary Quinto’s Spock, which is so wonderful, I mostly paid attention to Leonard Nimoy’s depiction because we are of the same timeline. I spent a lot of time with the original series and his performance. As I would review my lines, I would have an episode on and try to absorb the musicality of his voice and pay attention to what he did. I saw someone who had a great awareness of the emotional world around him. Spock’s often referred to as a computer, unemotional. But I think he’s deeply emotional; he just doesn’t interface with the emotion going on around him. He chooses very carefully how to engage with it and speak to it. Often, we may fall into hysterics, joy or anger over a given situation. He tends to see that but operates from a place purely from logic, which is quintessential Spock. There’s a wisdom to Spock, but I think with him comes emotional struggle and strife. That was what was on the page for me for Discovery. Somebody who’s having deep feelings in his life, and it’s shaping who he will become.

'Star Trek: Discovery' Renewed for Season 3 at CBS All Access With New Co-Showrunner

You met with the Nimoy family last summer before you started filming. What was that experience like?

It was really special. I found out the week before that I had gotten the job. I was overwhelmed. I was still in shock the following week. I was curious to meet them, and CBS arranged a time for us to get together. Leonard Nimoy’s children were so open, kind and welcoming. They were very there for me and curious about what my plans were for my preparation. We spoke about how Nimoy prepared. It was one of the first steps to feel worthy of doing this.

As a Trek fan, how much pressure have you experienced from the weight that comes with the Spock name? Did it lessen as you’ve become further involved with the role?

Definitely, but it did take some time. The territory we cover with Spock in the second season is new; it’s been uncharted. There weren’t reference points for certain scenarios. Luckily, I had such amazing support around me. Sonequa Martin-Green was a great anchor. The first month or two was very frightening, but then I started to feel like, “OK, I’m here. I’m doing this. I’m not fired.” (Laughs.) Then I started to get more relaxed.

What episode or story did you pull from the most in your portrayal of Spock?

“The Menagerie” [from the original series] is such a beautiful two-parter. It’s such quintessential Spock because it’s so dignified and something emotionally driven, but logically executed. That’s also all about my relationship [with Captain Pike, played on Discovery by Anson Mount], and that showed me great respect and admiration between them.

Discovery takes place 10 years before the events of the original series. How have you used that to build out your portrayal of Spock?

Because it takes place 10 years before the original series, there were some liberties that we all felt free to take. The writers laid out the emotional framework and map for me. For me, it was always about where Spock was headed, who he was going to be in 10 years. You have to be careful with Spock. He’s not too emotive, but he is going through something. It felt like splitting hairs, being careful to stay subtle and true to the control that he has over himself and his emotions. But I also wanted to make sure to explore them in a way that’s noticeable. It’s a very fine line with him, being full of emotion but controlled. The human side of Spock is always at odds with his Vulcan side, which is what makes him such a compelling character. It’s about sitting in the middle of that conflict and being very specific to what that was.

How do you think your grandfather, Gregory Peck, would feel about you getting the opportunity to give your take on such a famous role?

I’m not sure. I didn’t know him too well growing up; there just wasn’t the opportunity for that. There wasn’t a presence in mind of “What would grandpa do?” But there are moments where I thought he must have underwent some experience like this. I felt a lot of pressure to represent this character in a noble and upright way, this responsibility that hadn’t been on my shoulders before. That made me think of him. He probably endured a lot of stress and expectations. He must have had a lot of strength to do that, so I really dug for that in myself. The gift I have in being related to him is that I have the delusion that I’m capable of doing it. It’s such a strange industry, a far-off dream for oneself. Knowing he did it before gave me a lot of comfort.