Skip to main content
January 15, 2019 8:15am
Logo text
[This story contains spoilers for all episodes of Star Trek: Short Treks.]
When Star Trek: Discovery returns with its second season Jan. 17 on CBS All Access, it will have been off the air for more than a year. Acutely aware of how challenging it is to retain viewers in a cluttered landscape, CBS All Access released a handful of monthly shorts — aptly named Star Treks: Short Treks — that highlighted stories that take place outside of Discovery‘s plot but also offered insight as to where the titular ship’s voyage could be headed in the coming season(s).
Take, for example, “The Brightest Star.” Short Treks’ third episode serves an origin story for lone Starfleet Kelpien representative Cmdr. Saru (Doug Jones). After Saru’s many references in season one about life on his planet Kaminar, including his people’s function as prey, it was surprising to see that things were less animalistic and more ritualistic. Rather than being herded like animals, the Kelpiens turn their fate into a tradition, as local priest (and Saru’s father) Aradar (Robert Verlaque) gathers those chosen in a circle of stones to sacrifice themselves to the mysterious predatory Ba’ul in a flash of light.

“That was a bit of a surprise, but a good one that makes sense,” says Jones. “We’re sentient beings; we’re smart, we’re imaginative and emotional beings that can connect and have families. So it wouldn’t make sense that we would act like cattle. We accept the ritualistic religious aspect that there’s a great balance to be had, and we’re a part of that.”
The adolescent Saru questions his father’s rituals that make an effort to preserve the “great balance” and keeps his head firmly facing upward to what’s beyond Kaminar. It’s this initiative and technological expertise that leads Philippa Georgiou (Michelle Yeoh) — then a lieutenant — to offer him an unorthodox place in Starfleet, provided he immediately leaves his home planet. Jones has confirmed a return engagement to Kaminar, which should be sure to dredge up feelings around his sudden abandonment of Aradar and his sister Serrana (Hannah Spear). What’s more, exploration of the stars has given Saru much more worldly wisdom than the other Kelpiens, but an opportunity to educate them or stop the Ba’ul’s feasting comes as a violation of the Prime Directive.
“A warp society that has all this technology is not allowed to interfere with the natural progression of a pre-warp society,” Jones says. “It needs to happen on its own; they need to discover and develop things on their own. Now that I’ve lived on a starship and achieved the rank of first officer, I know so much. I want to save them from the hurting and the culling experience that we’ve always known, but I can’t go back and interfere. That’s the big thing you’ll see me wrestling with.” 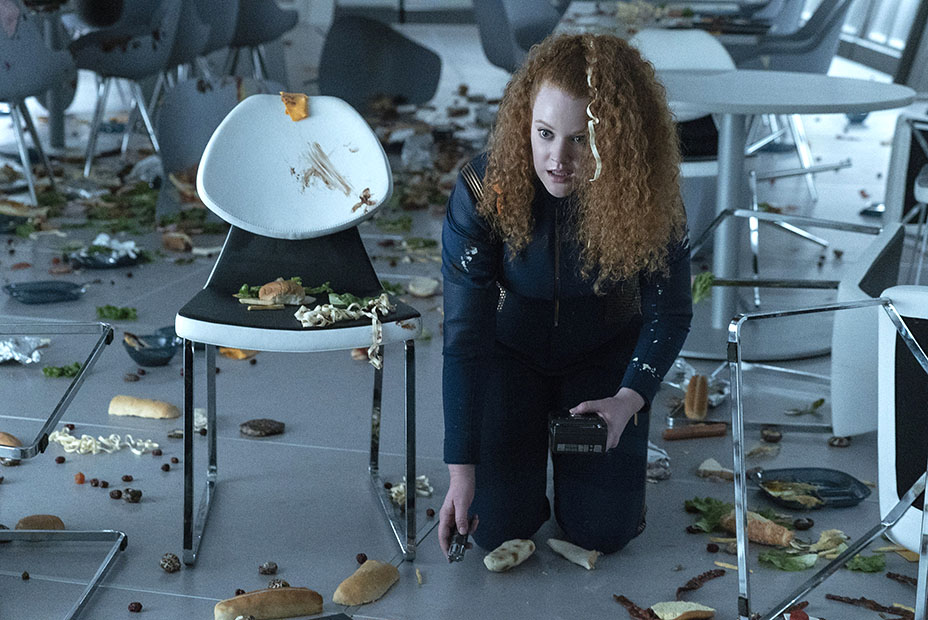 Though not as significant as possibly preventing a species-wide culling, Saru’s fellow crew member Sylvia Tilly (Mary Wiseman) has her own growth set up in a Short Treks episode. “Runaway” takes place after her acceptance to the Command Training Program, with the ensign getting her first, albeit unconventional, test of her leadership skills. She’s able to forge a bond with stowaway and Xahian princess Po (Yadira Guevara-Prip), reasoning with her to release to Starfleet information on the dilithium crystal incubator she invented, innovating the warp drive for Star Trek series to come.
Though the question remains as to whether a trip to Xahia is in the cards for Discovery’s second season, “Runaway” provides a key moment of growth for Tilly, which she’ll be sure to take with her as she comes into positions of authority in future missions. “Po has a lot of teenage impudence, and I think that is challenging to Tilly,” Wiseman says. “To find a way to connect to her and find common ground between them, she learns how to be the older person in the room, a figure in authority, and has to help guide her in a gentler way. Learning how to connect with someone like that was part of the journey for Tilly.”

While the Discovery crew seems to be focused on the new mystery of the “Red Angel” and a search for Spock (Ethan Peck), per the most recent trailer for season two, there still exist lingering threats out there from the first season. One of the most significant threads, or hairs, is antagonist Harcourt Fenton Mudd (Rainn Wilson). “The Escape Artist,” the most recent Short Treks installment, shows the grandest con man in the galaxy unencumbered, having fled his marriage that the Discovery crew used to subdue him in their last encounter. The short is a presumptive walk to the guillotine for Mudd, trying every tactic in his book with his Tellarite captor (Harry Judge) to evade getting handed over to Starfleet.
His common lines fail to permeate the Tellarite, which becomes understandable once a major twist is revealed at the end of the short. Those lines are actually lines of code. The Mudd the audience had been watching the entire time, as well as the Mudds shown in a variety of scenes outside of the Tellarite ship, are mere androids. The final scene reveals the true state of the flesh and blood of Mudd, aboard his own grandiose ship disguised as a bounty hunter, constructing the bots and then selling them off as the real deal to collect a profit. While this final flourish does serve as an excellent connection to the Original Series’ depiction of Mudd (who memorably served as ruler of a planet of androids), it also makes him more dangerous if and when he seeks revenge on the Discovery with a regiment of robots at his disposal.
“For him to fit in with the Discovery world, he needed to take the dial a bit more to the villainous, dastardly Mudd,” Wilson says about his take on the character. “It’s always nudging those dials. How do you keep him fun, lovable and enjoyable, and a little bit Shakespearean, while at the same time grounded, deadly and earnest? You could never be in a situation with Mudd that you wouldn’t take seriously. At the end of the day, he does need to be taken seriously.” 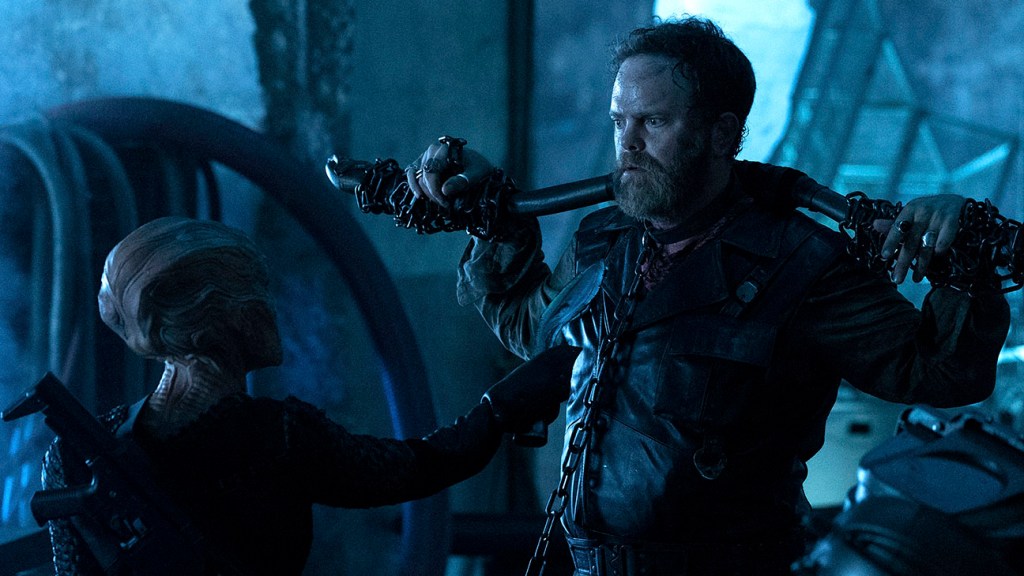 While three of the Short Treks episodes set up possible stories for the near future, one plays a much longer game. “Calypso” shows a much different Discovery, abandoned by its crew for more than a millennium. Left to its vices and operating under the command to stay put until its crew returns, the A.I. of Discovery spends the downtime evolving, to the point where it gains a name (Zora), a voice (Annabelle Wallis), and a personality. When Zora brings aboard runaway soldier Craft (Aldis Hodge), the two develop a mutual attraction, and the complications that result grasp the notion of rapidly advancing artificial intelligence, a theme that feels extremely pertinent today.
“I wanted [Zora’s] predicament to be poignant and acute for us to understand what she understands,” says Michael Chabon, who wrote “Calypso” and is also working on the new Star Trek series focusing on Jean-Luc Picard. “They aren’t coming back, but as incredibly intelligent as she is, she still has her orders. Once I had that framework in there, the idea was, ‘What’s she been doing all this time?’ I imagined she had been upgrading herself continuously and increasing her sentience and humanity. It took 1,000 years of complete solitude and leisure for her to improve herself to this state where she’s essentially fully human.”

“Calypso” serves as an endpoint for the U.S.S. Discovery, which is surprising given the excitement surrounding the ship on the main show with its advanced technology and innovative breakthroughs such as navigation of the mycelial network. Even more suspicious is the fact that the last crew to staff the ship never returned, implying either an away mission went catastrophically wrong, or Discovery itself became inhospitable and forced an evacuation. Either way, even if Discovery has happy endings for Saru, Tilly, Mudd, and the other characters, the eponymous starcraft will have quite the opposite outcome.
While Short Treks ramps down for CBS All Access to fire maximum thrusters on Discovery, its success has guaranteed a quick return, according to showrunner Alex Kurtzman. He recently announced at least two more animated Short Treks episodes on the way after the second season of the main show wraps. With another season to look forward to, the possibilities, much like the galactic terrain the Discovery explored before being abandoned for eternity, are endless.