Skip to main content
January 19, 2019 9:00am
Logo text
[Warning: This story contains spoilers for the season two premiere of Star Trek: Discovery on CBS All Access.]
The first season of Star Trek: Discovery ended on a seismic cliffhanger, with the titular ship receiving a distress signal from Captain Christopher Pike of the USS Enterprise. Fans waited with bated breath for months to get a glimpse of the show’s take on The Original Series character, and they got it when Anson Mount beamed aboard as Pike in the season two premiere.
The episode warped the audience right back to where the series left off, with Pike and a team of Enterprise officers coming onto the Discovery with one purpose: to commandeer it. The revelation shocks the Discovery crew, who were on their way to pick up their new captain on Vulcan before getting hailed. Pike tells the crew he wanted to deliver the message personally, showing them (and the audience) that he is much more understanding and warmer than the ship’s previous captain, Gabriel Lorca (Jason Isaacs).
Mount was able to pull from personal experience to depict Pike’s most noteworthy characteristic. “I’ve been fortunate enough to have had the experience of teaching before,” he tells The Hollywood Reporter at the Discovery premiere in New York City. “You learn eventually that the power of self-deprecation is very important.”

Pike continues to show this attitude on the bridge of Discovery when he puts his Starfleet file up on the screen for all to view, expressing that he’s an open book. “I know this is a hard left turn,” he tells them, and he understands their doubts given their recent track record with captains. But Pike is plain about it: “I’m not him. I’m not Lorca.”
Discovery makes a concentrated effort to separate Pike from Lorca, and understandably so. The latter spent the first season as a relentless and ambitious leader, only to reveal later on that he had been using his crew to bring him back to his home in the mirror universe. His betrayal left the group, and Starfleet as a whole, rocked to the core, and though he perished at the hand of Emperor Georgiou (Michelle Yeoh), his memory still emanates from that captain’s chair.
Alex Kurtzman, co-creator and showrunner for Discovery, purposely aimed to characterize Pike on the exact opposite end of the spectrum from his predecessor. “Everybody thinks of Pike as a noble, just and kind captain,” he says. “It felt right that in the wake of a captain like Lorca, who was so manipulative and wreaked havoc on the ship, we needed a captain who was 180 degrees in the other direction. It felt like an interesting and different take, a new flavor for the show.” 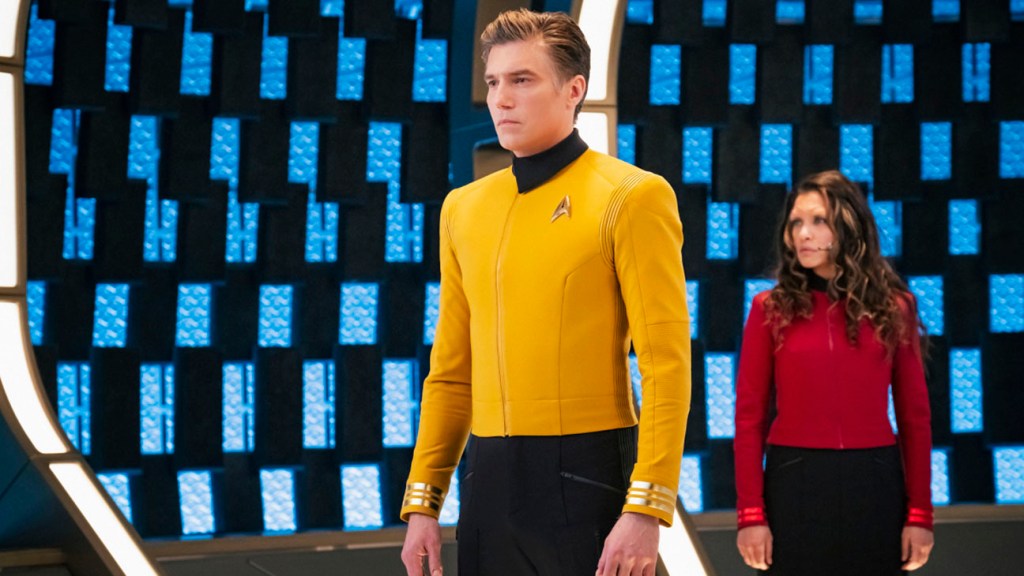 Perhaps the most affected by learning about Lorca’s true identity was Michael Burnham (Sonequa Martin-Green), which caused her relationship with her new captain to start out a bit rocky. When Discovery warps to an asteroid in pursuit of one of the mysterious seven bursts that Pike is investigating, they spy a Starfleet vessel wrecked on its surface. Pike insists on assembling a rescue mission, despite objections from Burnham and Saru (Doug Jones), who had been serving as acting captain of Discovery. According to Mount, that momentary conflict embodies the potential Pike sees in her from their very first conversation.
“The minute Pike encounters Burnham, he sees captain material,” he says. “Her instincts are spot on, her confidence is on par with her abilities, her judgment is amazing and she has the ear of all of her comrades. I recognize very quickly she has the things that I don’t have yet, which is trust from the entire crew. She can help me with that, and I can help her with other things.”
He departs Discovery with a small landing party, including Burnham. When several technical malfunctions leave him spiraling out of control, she is determined to swoop in and save her new captain, but he refuses to put her in danger. “I’m comfortable with the risk, sir,” she says, uncompromisingly. “And I’m not,” he replies.

She finally breaks through by telling him, ”You need to trust us, sir. I told you, we don’t abandon each other. Discovery has you.” That seems to change Pike’s outlook on working with Discovery instantaneously. While he’s spent his entire time onboard the ship convincing the crew to trust him, he also has to be able to trust them. As a result, he goes with the plan the team concocts to save his life, then returns the favor later when rescuing Burnham from the wreckage of the vessel.
The adamancy in this mission, according to Kurtzman, comes from the fact that the Enterprise did not participate in the Federation-Klingon war that occupied Discovery’s first season, due to its five-year mission. “He sat out the war because he was ordered to, and that created a big problem for him,” Kurtzman says. “He had to sit there and watch many of his friends and colleagues die and feel entirely helpless in the process. He’s a captain who wants to make up for lost time, who wants to correct an error. If a character were to caution him to slow down, that would be very difficult for him. I think that’s where we will see him find tension with this crew.”
Mount agrees: “He has no business being on that mission. I don’t think Pike realizes it at the top of the season, but there’s some serious need to make up for missed action. He makes some ill-informed decisions because of it. That’s the primary internal conflict going on with Pike throughout the season.” 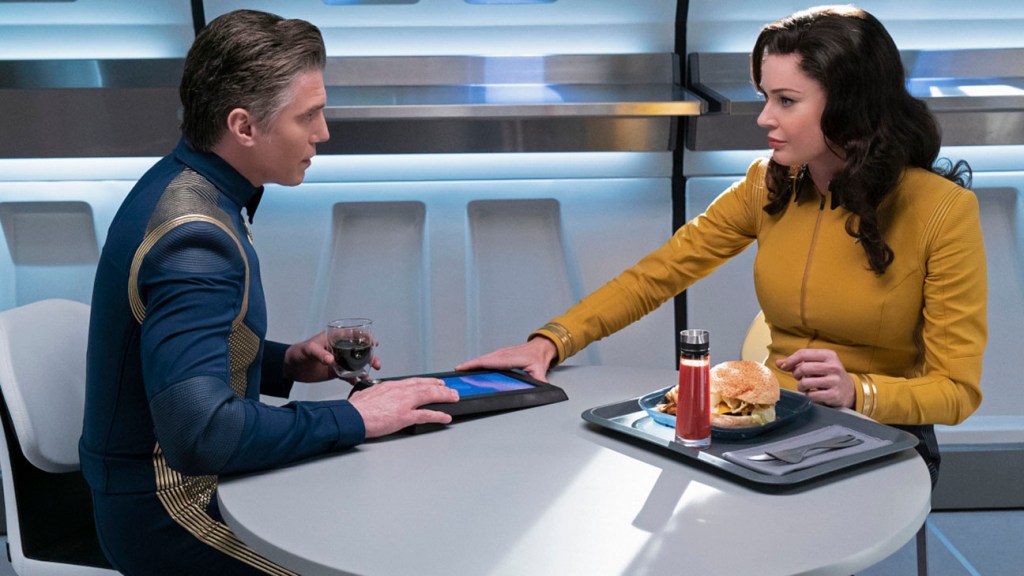 Though there may be tension on the horizon, for now, everything appears to be serene. Pike ceded the captain’s chair to Saru to handle a follow-up excavation mission, indicating he’s more than happy to cohabitate the role with the Kelpien. He’s changed uniforms from the familiar colors of the Enterprise to the more consistent tones of the Discovery. He’s even made plans to convert Lorca’s standing desk-centered ready room into a more hospitable place, encouraging open discourse between captain and crew. Discovery has fully transitioned into the Pike era, and as he promises both Burnham and the audience, “Wherever our mission takes us, we’ll try to have a little fun along the way too. Make a little noise, ruffle a few feathers.”
As the episode leaves the ready room, one remaining fortune cookie is left behind to symbolize Lorca’s legacy. It reads, “Not every cage is a prison, nor every loss eternal.” After feeling under the thumb of Lorca for so long, it looks like Pike is ready for Discovery to fly free, feather-ruffling and all.
Make sure to bookmark THR.com/StarTrekDiscovery for full coverage all season long.