Skip to main content
January 24, 2019 6:30pm
Logo text
[This story contains spoilers for “New Eden,” the second episode of season two of Star Trek: Discovery on CBS All Access.]
The plot of “New Eden,” Thursday’s episode of Star Trek: Discovery, focuses on a schism between a planet of displaced earthlings who operate under a mystical belief system, and the scientific knowledge of their futuristic compatriots aboard the USS Discovery. With that topic on the line, the CBS All Access drama enlisted a familiar face who knows both the old and the new to direct the episode: former Star Trek: The Next Generation star Jonathan Frakes.
Frakes started his trek on Trek during franchise creator Gene Roddenberry’s tenure. Roddenberry’s atheist beliefs permeated into those initial episodes as the characters refrained from discussing spirituality or mysticism. But “New Eden” deviates from that prime directive and puts faith front and center in a contemplative installment, as Frakes walks the audience through each character ruminating on their respective guiding principles.
Michael Burnham (Sonequa Martin-Green) struggles to reconcile the sighting she had of the “Red Angel” figure with her logical understanding of the cosmos. Unlike Burnham’s skepticism, Saru (Doug Jones) begins to find his own meaning in the seven signals, and the larger purpose Discovery may be serving in assisting those across the universe. Christopher Pike (Anson Mount) finds himself in a quandary when the belief in his mission to decode the mysterious seven signals lies in conflict with his Starfleet credo not to interfere. And Paul Stamets (Anthony Rapp) imparts on Ensign Tilly (Mary Wiseman) his mycelial-based belief that nothing is ever truly gone, something Tilly may have to handle firsthand when she receives a blast from the past in the spirit of childhood friend May Ahern (Bahia Watson).

'Star Trek': How 'Discovery' Handled the Changing of the Guard

Below, Frakes talks with The Hollywood Reporter about Discovery’s theme of science versus faith, and what the events of “New Eden” set up for future episodes of the sophomore series.
For all that Discovery does to break the Star Trek mold, this mission seemed to hew more closely to the older series in structure and content. Did you get that sense of old school Trek in working with the episode?
That’s how it felt. I was afraid after the bombast and excitement of the premiere, it would be dull. The acting is so fabulous, and the story’s great, but it’s a horse of a different color. But I think it still feels like classic Star Trek with some of the newer Discovery themes.
As someone who worked with Gene Roddenberry, who was against writing Star Trek stories around religion, how do you feel about Discovery embracing the idea of faith?
I’m not sure they’re embracing the idea of faith as much as they’re embracing the conversation about science versus faith. It’s like the Scopes trial. The idea we’re all naive to believe there’s not a higher power out there applies to the 24th century as much as it does to the 21st century. We’ve evolved as a culture a lot since Gene Roddenberry was with us. We have to stay current on so many levels, in the filmmaking and storytelling. The moral compass of the country seems to have a bit more of a liberal bend than it did back in the day. Gene comes from the 1960s; he was an old hippie! [Laughs.]
What do you think about New Eden’s belief system, specifically its unification of all major religions under one roof?
When the characters are at the church, there’s a compilation of all the core religions of the world. They look at the walls and see Buddhism, Christianity and Judaism. Then you have the guy in the basement [Andrew Moodie’s Jacob] holding onto his family’s theory that it’s all hockey puck. He believes there’s something out there. Then our crew shows up in their spacesuits, and he’s vindicated. 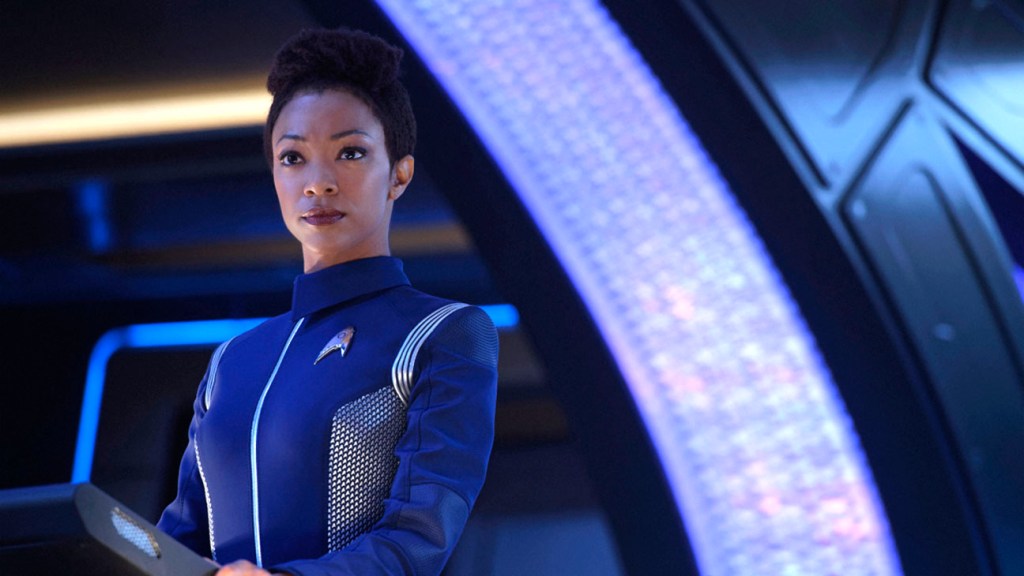 To your point, despite the vast majority cooperating under this shared ideal of faith, Jacob serves the role of the always-present skeptic. What does he represent with the major themes of this episode?
Every belief system always has differing opinions, no matter what umbrella they may be under. It opens up the opportunity to show the two sides of the conversation. Part of what I found interesting about this episode was that [Discovery] was really violating the Prime Directive. That’s your dogma; those are your marching orders. You don’t fuck around with other people’s cultures.
That conflict gets represented in Pike’s handling of the situation, trying to walk the fine line of satisfying his own pursuits while not betraying his core ideals. It shows that no matter what you may believe, there’s still a possibility of moral conflict.
Hence the drama. It sets up season-long journeys with what these seven signals represent. They’re essentially the arc of our Discovery season that we’re teasing. As you get through the next episodes, some of the signals are explainable, and some of them aren’t. The journey is classic Star Trek, and Discovery is determined, with the brains of that ship, to unravel what they mean and where they came from. And Spock is the key to that. Pike is the voice and eyes of all of us. Even as the captain of a spaceship, he’s still a relatively young man. He’s not dug in so deep in his beliefs that he cannot learn new points of view. Pike is so much more interesting in Anson Mount and the writers’ hands than the little glimmer we saw in “The Cage” and “The Menagerie” from the original series.
On the note of Spock, “New Eden” starts on a surprising reveal when Pike says Spock checked himself into a psychiatric unit. How does that play into what showrunner Alex Kurtzman has said about the characters finding their place in the universe this season?
That’s a great tease. The show has given itself wonderful leeway in that it takes place 10 years before the original series, so the idea of Spock with Kirk hasn’t really happened. Spock and Burnham working out their complicated relationship are at the heart of some of this. [Ethan Peck] was so respectful of what Leonard Nimoy had brought to Spock. It’s a great combination of pride, ownership and loyalty. Discovery has really tried to embrace the Roddenberry canon.

Were you surprised by the twist that May, who had been following Tilly around the latter half of the episode as her cheerleader, is not actually alive?
At the end of season one, an entity actually entered Tilly. It looked like a green spark, like Tinkerbell, that landed on her. I thought there was some aspect of that “magic” that allowed Tilly to have what we perceive as hallucinations about her childhood and this character who she can only see. She has the difficulty of realizing that nobody else sees it, but she doesn’t want to admit it. And she’s already very socially complicated as a person.
Tilly takes huge risks this episode in doing tests on the asteroid she brought in, hoping she can find a viable dark matter alternative to relieve Stamets of his connection with the spore drive. What influences her choice to pursue a task so tenaciously for the betterment of somebody else?
I think Tilly feels the pain and anguish that Stamets is going through. Stamets is tortured, yet attached to Captain Lorca (Jason Isaacs) in the first season, entering the network when it was clearly draining him mentally, physically and emotionally. Even after his partner [Wilson Cruz’s Hugh Culber] was killed, he carried on. Tilly was the most aware and sensitive of what Stamets had gone through. You get the feeling she felt responsible for or guilty about his involvement in the spore drive. They worked together in engineering, and she may have felt she persuaded him to wire himself in. I think she felt guilt by association. 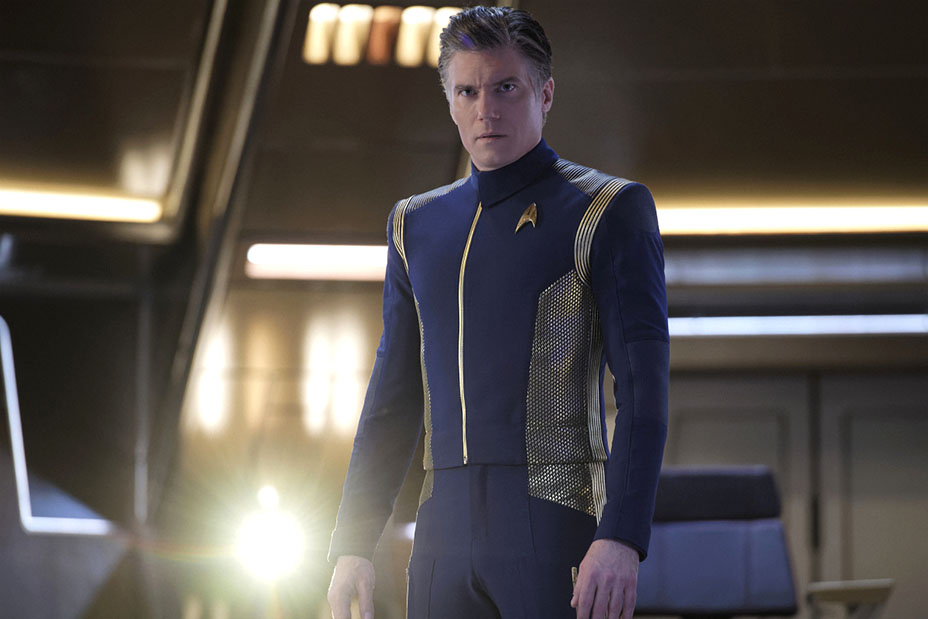 CBS All Access and Kurtzman are readying a Picard series with Patrick Stewart returning to reprise his role. As someone whose character was such a large part of Picard’s journey with the Enterprise, how do you feel about the continuation of his story?
I’m thrilled. Patrick is absolutely jazzed about this. He’s been in the room with the writers breaking the stories, and he has not had that privilege before in his career. It has motivated him and excited him to no end. I’m really looking forward to it. Picard 20 years later is a fascinating guy. He was a fascinating guy since we’ve met him.

Will you have a role?

I’m not allowed to say what role I have in the new series.
This interview has been condensed and edited for clarity.
Bookmark THR.com/StarTrekDiscovery for interviews and other Discovery coverage all season long.