Skip to main content
January 18, 2019 1:00pm
Logo text
[Warning: This story contains spoilers for the season two premiere of Star Trek: Discovery on CBS All Access.]
Star Trek: Discovery’s use of serialization has allowed the show to introduce, build up and ultimately resolve mysteries over several episodes. The previous season’s twists involved character-based revelations like Captain Gabriel Lorca (Jason Isaacs) being from the mirror universe and Lieutenant Ash Tyler (Shazad Latif) becoming a Klingon sleeper agent. But season two of the sci-fi drama has started its round of questions on a significantly larger and more theistic note.
The season premiere, “Brother,” involves Captain Christopher Pike (Anson Mount) and the crew of the USS Enterprise coming aboard Discovery with a difficult mission on the docket. Over the past 24 hours, seven bursts have appeared in perfect synchronization across 30,000 light years. The energy behind these bursts, along with their intentions, are unknown; as Pike rhetorically asks the Discovery crew, “Is it a greeting? A declaration of malice?”

Whatever the purpose is, it seems the solution does not lie in science. Any attempt the Enterprise has made to engage with the signals results in its computer systems going haywire. The reason why Pike and his crew have to commandeer Discovery in the first place is that their ship suffered several catastrophic system failures on the way to a burst location. While a logical mind might believe that correlation does not necessarily mean causation, this may be a case in which logic must be replaced with faith.
Michael Burnham (Sonequa Martin-Green) begins the premiere with an old story, an African folktale that depicts the creation of the Milky Way from the perspective of a girl who threw ash into the air. She refers to the universe in her narration as containing a secret, “an enormous letter in a bottle made of space and time, visible to only whose hearts were open enough to receive it.” As she speaks, the visual changes to a red galaxy filled with seven bursts, not unlike what viewers see in both Pike’s briefing and Spock’s (Ethan Peck) quarters later in the episode.
“What I love about that opening is that it jumps you to this incredible bird’s-eye-view perspective on how small we are in the universe, and how massive the cosmos are,” Discovery’s co-creator and new showrunner, Alex Kurtzman, tells The Hollywood Reporter. “Burnham is really going to be wrestling this season with her place in the universe and what her purpose is. Spock is doing the same.” 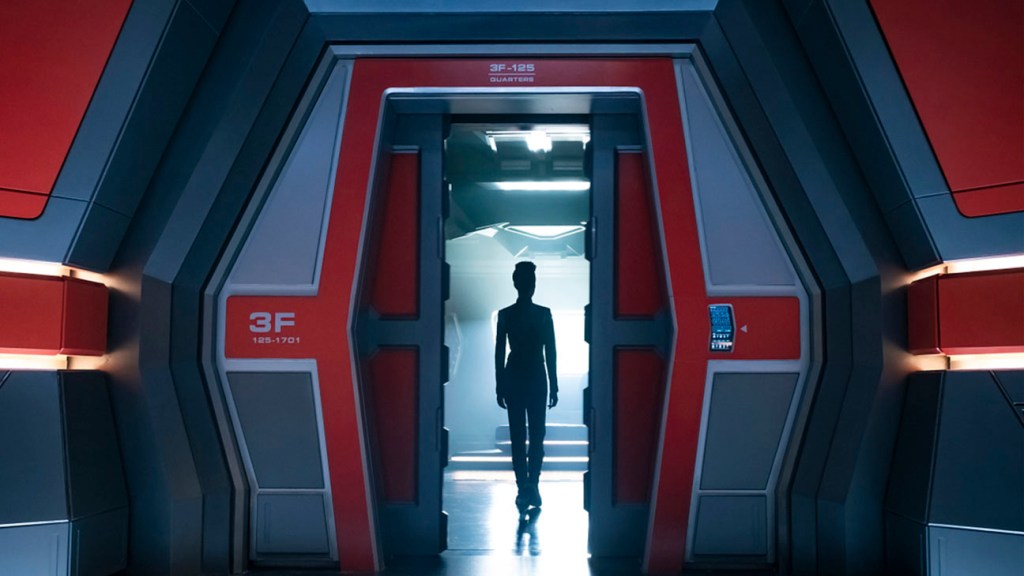 Kurtzman seems to be alluding to an existential turn for Discovery this season. With the characters now recovering from the recently ended and impactful Federation-Klingon war, it’s understandable that the lack of a common enemy would make them turn inward. And in those moments of crisis, faith can be established, an opening of the heart to the universe at large as alluded to in Burnham’s narration. For Martin-Green, who spoke with THR at the New York premiere of season two, her own sense of faith allowed her to embrace the internal conflict of her character this season.
“Here I am, Sonequa, a woman of God, portraying a woman of science,” she says, “a woman who is bound to facts, math, and the logic. She’s definitely exploring her humanity. But there’s something about finding the courage and the security within to not trust those numbers and [instead] trust your heart and your gut, to hope for something that isn’t readily in front of you. Can people heal enough, individually and collectively, to trust the facts, but hope for the best?”
It’s a question that Kurtzman wanted to explore from the get-go, considering how the franchise has dealt with the topic before. “Initially, it started as a conversation about the way in which Trek has dealt with the issue of space versus science,” he explains. “In The Original Series, religion doesn’t exist. Yet faith is something that has always been a major topic in different ways. The idea of this mystery that has no answer immediately suggests a presence or force greater than anything anyone has ever known. It was really intriguing to us.”

This force is represented in the figure of the Red Angel. It’s mentioned many times throughout the trailers and lead-up for season two, and audiences got a possible first look at it in the premiere. When a transporter accident leaves Burnham stranded in the wreckage of the USS Hiawatha, she seems genuinely in a moment of crisis. Suddenly, she visualizes an obfuscated figure surrounded by a red aura in the distance, spindly bones flanking it to hint at the image of wings. It turns out to be something of a mirage, as Pike soon steps into the picture, rescuing Burnham in the nick of time. But it’s safe to say that this will not be the last time it shows up in her life, whether for guidance or as a warning.
Though the Red Angel only makes an appearance in that particular moment, the episode as a whole may hint at a connection that’s occurred across time. “Brother” takes the audience back to Burnham’s childhood on Vulcan, depicting her initial interactions with Spock. Throughout those scenes, one color is exceptionally prevalent: red. From the walls and doors of Sarek (James Frain) and Amanda’s (Mia Kirshner) house to the petals falling off the trees outside, and even the dress Amanda wears when she greets Burnham in her new home, red seems to embody life on Vulcan.
The connection to Vulcan gets further substantiated with Spock’s involvement in the mystery. Though adult Spock is absent from the episode, Pike tells Burnham that Spock took off from the Enterprise a few months ago in pursuit of “a question he couldn’t answer.” When she investigates the final log he left on the ship, he discusses seeing a recurring vision in his dreams. “I understand its meaning and where it must lead me,” he says, signaling his own meaningful journey. 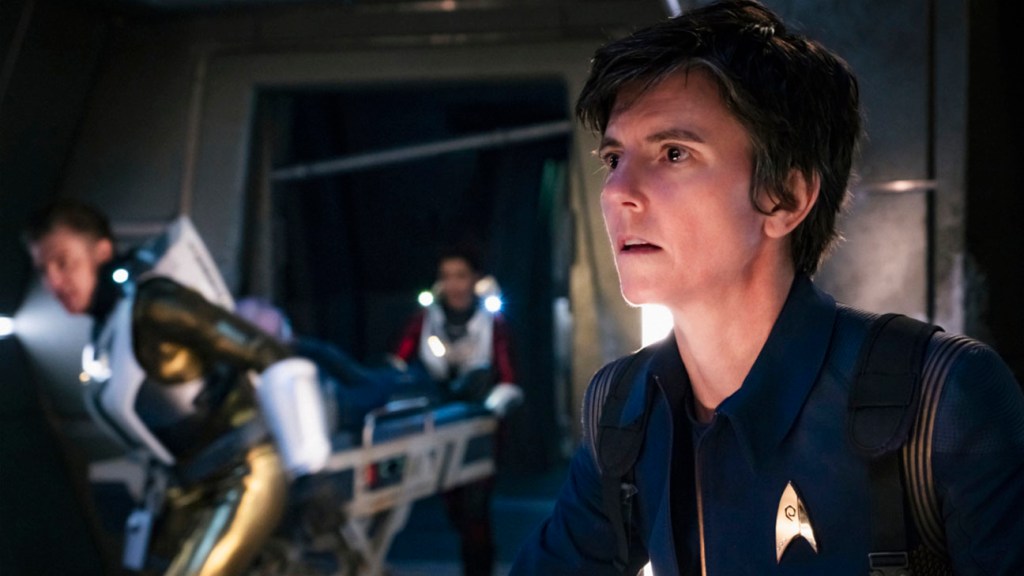 “It sheds specific light on Spock’s dilemma at that point in his life,” says Kurtzman. “Spock has, as we all know, a very unique relationship to logic. And logic fails him in dealing with the Red Angel. He doesn’t know whether to turn to logic or emotions to solve the mystery.”
So if this Red Angel is somehow communicating with Burnham and Spock as theorized, what does it want with them? It’s tough to say at this point, but fans can look to the events that have happened so far as steps in a grander plan. Perhaps the Enterprise was purposely stopped in the path of the Discovery so Burnham could find out about the seven bursts. Maybe the lone remaining burst brought the crew to a perplexing asteroid to get them to investigate its potential as an unlimited energy source, or to find the shipwrecked engineer Jet Reno (Tig Notaro). Whatever the purpose of the Red Angel is, it seems to have loomed larger in Burnham and Spock’s lives than initially expected.
Make sure to bookmark THR.com/StarTrekDiscovery for full coverage all season long.