Skip to main content
November 12, 2017 6:30pm
Logo text
[Warning: This story contains spoilers for the midseason finale of Star Trek: Discovery, “Into the Forest I Go.”]
CBS All Access’ Star Trek: Discovery took a few major steps forward during Sunday’s midseason finale when the crew of the Discovery went to war with the Klingons over the planet of Pahvo.
Not only was Starfleet able to crack Klingon cloaking technology, giving them the upper hand in future battles, but Admiral Katrina Cornwell (Jayne Brook) was rescued from the enemy species’ ship. Additionally, Ash Tyler (Shazad Latif) took his budding romantic relationship with Michael Burnham (Sonequa Martin-Green) to the next level. After suffering from flashbacks to his time as a Klingon prisoner, he opened up to Michael about the torture he experienced.
Still, with one final spore jump leading the crew somewhere unknown, there were far more questions than answers in the Star Trek: Discovery midseason finale. Here, The Hollywood Reporter explores the biggest mysteries that will (hopefully) be addressed when the series returns Jan. 7 with the second half of its maiden voyage.

Where did the Discovery warp to?
The midseason finale cliff-hanger saw a spore drive jump go wrong, stranding the Discovery nowhere near the star base they were attempting to reach. The purple-colored piece of space they wound up in is littered with Klingon wreckage and is untraceable to the ship’s computers.
So where did the crew warp to? There are a few distinct possibilities. One is a previously undiscovered corner of the universe. If nobody has been there before, it wouldn’t appear on any computer system. Then again, this could also be the proper introduction of the mirror universe.
When will the show finally explore the mirror universe?
It was the fifth episode of the season that first hinted at the mirror universe on Discovery. After using himself to power the spore drive, it was revealed that Paul Stamets (Anthony Rapp) and his reflection in a mirror had become disconnected. After the lieutenant walked away from his reflection, it watched him leave.
Given that Stamets‘ first use of the spore drive teased the mirror universe, it’s possible that this new technology is the key. Perhaps the final jump that sent the Discovery off course took the entire ship there and it will be addressed when the show returns with the episode “Despite Yourself,” which Star Trek: The Next Generation alum Jonathan Frakes is directing. It’s worth noting that Frakes was the first person to reveal Discovery would be doing a mirror universe episode. The parallel dimension containing evil versions of familiar characters was first introduced in the original Star Trek series.
What’s happening to Stamets?
It’s obvious that he’s doing major damage to himself by powering the spore drive. While his rapidly changing personality has been funny to watch, Dr. Culber (Wilson Cruz) has discovered that he’s doing harm to his brain’s white matter. Stamets is undergoing something no other person in the universe has experienced. While it’s exciting for him to be seeing the universe in a brand-new way, there’s a problem. Nobody’s quite sure what is happening and it may be too late to find out or save him. 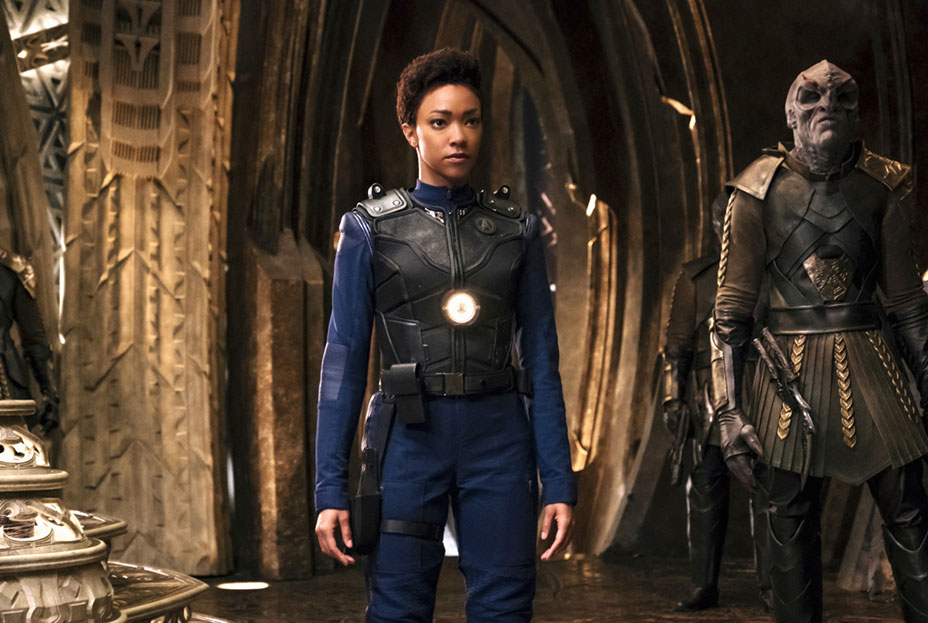 How will Discovery wrap up the Klingon war with only six episodes remaining?
While participating in a Q&A with fans in London, showrunner Aaron Harberts said each season of Discovery will be viewed as a novel. “Season one is the war novel and we won’t be doing another war novel,” he explained. That sounds like the show will be wrapping up this war with the Klingons by the end of this season. With only six episodes left — and the Discovery itself lost somewhere in space — how are they planning to bring such a major conflict to a close?
Is Kol actually dead?
As Kol’s [Kenneth Mitchell] Klingon ship was completely destroyed by the Discovery, it looks like the leader of the Klingons was killed. While that would certainly help Starfleet in their mission to end the war, is he actually gone? It’s not outrageous to think a heavily scarred Kol will reappear when the series returns.
What is happening with Ash Tyler?
This is perhaps the most fascinating question of all. As the midseason finale illustrated, there is more going on with Tyler than has been revealed thus far. Throughout the episode, he flashed back to the torture he experienced at the hands of Klingon warrior L’Rell (Mary Chieffo), which included being sexually assaulted. In the final moments of the episode, he goes to her and asks what she’s done to him. “Do not worry. I will never let them hurt you,” L’Rell tells Tyler. “Soon.”
She could be talking about almost anything regarding their horrible time together. However, there will be those who view these words as a hint about a Reddit fan theory before gaining steam with online. That theory suggests that Tyler is actually the Klingon Voq after some form of transformation, being used as a spy against Starfleet.

'Star Trek: Discovery' Renewed for Season 2 on CBS All Access

It may sound crazy at first, but there’s actually quite a bit of evidence to back it up. The biggest piece of the puzzle is that the actor credited on the show for playing Voq, Javid Iqbal, doesn’t seem to exist. Iqbal is listed as the person portraying the Klingon character, yet no mention of him unrelated to Discovery can be found online. He has no prior credits on IMDb, no photos and no social media footprint. He is also the only notable member of the cast to not take part in any promotional appearances or do interviews for the series.
While it’s possible that he is an actor who prefers to lead an incredibly private life, it’s very suspicious. Of course, it doesn’t help matters that the cast and producers deflect away from the question when asked.
As for how Tyler fits into the Voq mystery, Latif was originally cast to play a Klingon on the series — Kol, who Kenneth Mitchell went on to portray. It was announced in April that because of creative changes, he would instead take on the role of Tyler. For many fans, it is just too big of a coincidence. After all, what if Tyler’s torture wasn’t actually torture? What if, instead, it was part of a procedure to turn a Klingon into a human?
At this point, it’s nothing more than a theory viewers will continue to wonder about when Discovery returns. However, after L’Rell’s words to Tyler in the midseason finale, the speculation is only going to be amplified. Eventually the series is going to have to address it. Given how well Tyler has fit into the Discovery crew so far though, what happens if and when he’s revealed to truly be a Klingon? That might be a plot twist no viewer is going to enjoy.
Star Trek: Discovery returns to CBS All Access on Jan. 7.