Skip to main content
January 17, 2019 6:30pm
Logo text
[This story contains spoilers from the season two premiere of Star Trek: Discovery on CBS All Access.]
After nearly a year off the air, CBS All Access’ Star Trek: Discovery returned Thursday with its highly anticipated second season, which dove head-first into setting up its new world order with the introduction of Kirk predecessor Christopher Pike (Anson Mount).
The premiere, which focused on Pike’s first mission with Discovery, serves as an example of art imitating life, given the power shifts that have also occurred behind the scenes with the series’ second showrunner change. Franchise captain Alex Kurtzman took over for former showrunners Gretchen Berg and Aaron Harberts, while on board the USS Discovery, Pike stepped in for Gabriel Lorca (Jason Isaacs), a character who manipulated his crew in order to return to his home in the mirror universe.
As Pike advised his new crew in the premiere — “The best way to get into a cold stream is to jump right in” — so, too, did Kurtzman, who after co-creating Discovery now becomes its third showrunner while also overseeing the entire Star Trek franchise for CBS All Access. For Pike, meanwhile, he and the Discovery crew capped their first mission with a rescue in tow (Tig Notaro’s engineer Jet Reno).
Below, Kurtzman talks with The Hollywood Reporter about how the premiere sets up the rest of the sophomore season in the first of a new weekly Star Trek: Discovery interview series.


The premiere opens with Michael Burnham (Sonequa Martin-Green) sharing an African folktale about a girl who created the Milky Way by throwing ash into the air. This is happening over footage of the planets from the Cassini spacecraft, a throwback considering the intergalactic wonders viewers used to seeing on Star Trek. Why open the season that way?
What I love about that opening is that it jumps you to this incredible bird’s eye view perspective on how small we are in the universe, and how massive the cosmos are. The show is called Discovery for a reason. Burnham is going to be wrestling this season with her place in the universe and what her purpose is. Spock (Ethan Peck) is doing the same. I love the idea of speaking from a perspective past the experiences that she’s having in the premiere. Looking on her life and realizing, “I dismissed something as a story without recognizing how incredibly meaningful it would become to me in the future.” It felt like a very emotional perspective and a different way to begin our season, especially with the footage from Cassini. It’s archaic, the old way we used to look at space. Look how we evolved; look at how our understanding of and our place in the universe changes. I felt that was all embedded in that story, and I loved the visuals and emotional representation.
Discovery season one seemed like a declarative end of a chapter with the Federation-Klingon war coming to its conclusion. Why did you choose to start the second chapter by bringing in the Enterprise, considering its notoriety?
We discover in season one that Michael has a relationship with Spock. The mystery of why Spock, who we’ve known for over 50 years, has never mentioned his sister, is huge. It felt like there was no way we were going to be able to answer that question in one or two episodes. It was easily going to be the substance of a whole season. This season is a deep-dive into that relationship and what went wrong, their history and where they’re headed. That excited me. It’s the unwritten chapter of how Spock became the character that we meet in the original series. We’ll come to understand that were it not for his relationship with Michael, many of the things we know and love about Spock may not have flowered in the way that they did. 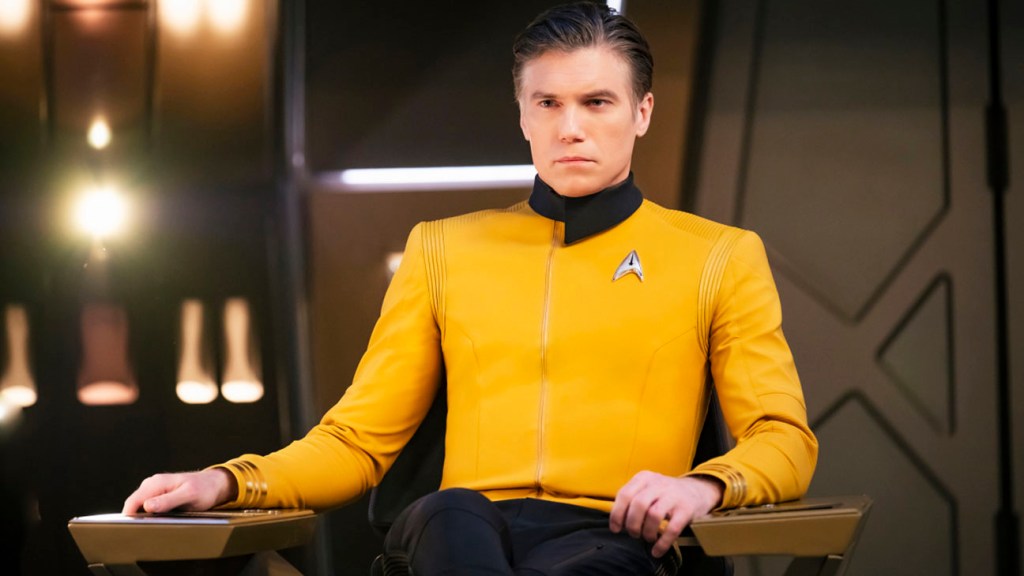 What prompted your characterization of Pike, considering what the audience has seen of him in other depictions?
He’s established as a pretty specific figure in [the original series episodes] “The Menagerie” and “The Cage.” And obviously, I have Bruce Greenwood in my mind from my work on the J.J. Abrams movies. Everybody thinks of Pike as a noble, just and kind captain. It felt right that in the wake of a captain like Lorca, who was so manipulative and wreaked havoc on the ship, we needed a captain who was 180 degrees in the other direction. It felt like an interesting and different take, a new flavor for the show.
The episode primarily focuses on Pike attempting to solidify his dynamic with the characters aboard Discovery. How did you find the beats of seeking out that trust from both ends of the relationship?

Pike sat out the war. We’re going to learn a lot more about that over the course of the season. He sat out the war because he was ordered to, and that created a big problem for him. He had to sit there and watch many of his friends and colleagues die, and feel entirely helpless in the process. He’s a captain who wants to make up for lost time, who wants to correct an error. It was hard for him to watch all these people die, and that’s a huge part of what drives him. If a character were to caution him to slow down, that would be very difficult for him. I think that’s where we will see him find tension with this crew. It’s not because he’s manipulating him; it’s because there may be a difference in procedure. As a captain, you have to make difficult decisions that may require allowing certain members of your crew to be at risk to save others. “The needs of the many outweigh the needs of the few.”


Let’s talk about the introduction of this mystery of the seven signals, as well as the “Red Angel.” These were both featured prominently in the trailers leading up to the premiere and served as a crucial part of the episode as well. How did you come up with these mystical enigmas?
Initially, it started as a conversation about the way in which Trek has dealt with the issue of space vs. science. Gene Roddenberry had a very specific take on religion as it relates to Star Trek. In the original series, religion doesn’t exist. Yet, faith is something that has always been a major topic in different ways. The idea of this mystery that has no answer immediately suggests a presence or force greater than anything anyone has ever known. It was intriguing to us. The other reason for the Red Angel was that it sheds specific light on Spock’s dilemma at that point in his life. Spock has, as we all know, a unique relationship to logic. And logic fails him in dealing with the Red Angel. He doesn’t know whether to turn to logic or emotions to solve the mystery. The only way he can work through it is with his sister, to whom he has a very complicated relationship. It felt like a really wonderful way to get them to have to wrestle with each other over a larger mystery.
What was behind the creation of Jet Reno, the Chief Engineer of the USS Hiawatha who Burnham and Pike rescue in the premiere?
Tig and I have known each other for over 20 years; we were assistants answering phones together. We really liked each other a lot. But over the years, our careers went in different directions. She was always really funny, but when she became a famous comedian, I was not at all surprised. She was always so deeply insightful and just a wonderful human being. It gave us a great chance to reconnect. As I was thinking about this character, Tig came into my head. We were so delighted to work together after having started our careers together. The idea that Trek represents all kinds of people is not just a mission statement for us; it’s the way we go about things. We really didn’t have anybody like Tig on the show, and she would be such a unique and wonderful addition. And she was everything I hoped she would be. 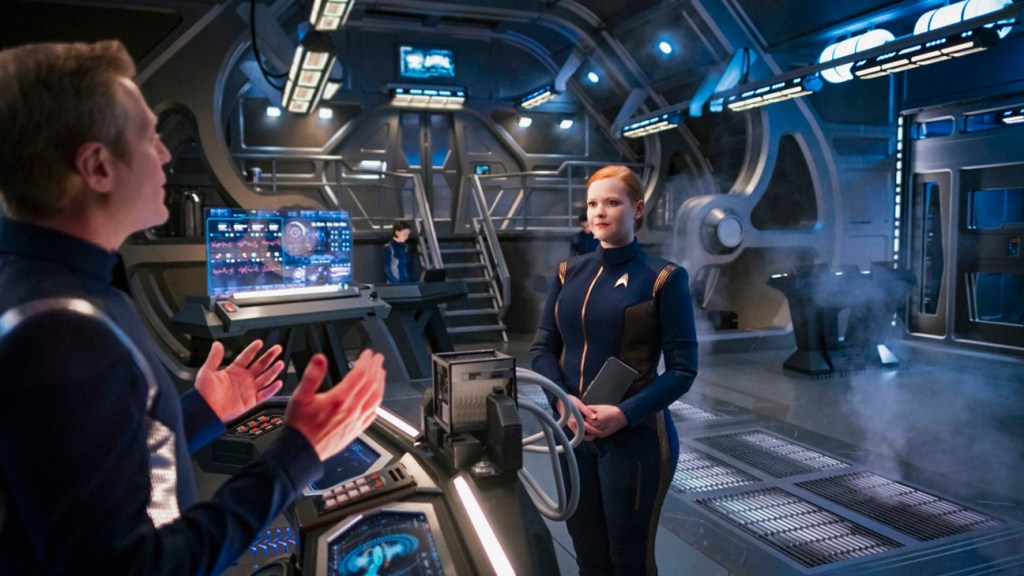 In addition to bringing up Jet Reno, Discovery was able to excavate a hunk of an asteroid that is causing all sorts of abnormal reactions, which prompts Ensign Tilly (Mary Wiseman) to believe it could be a source of renewable energy. Does that mean that focus on travel technologies like the spore drive is not put to rest as initially thought?
The spore drive is still a big part of Discovery and will remain so. What we’ll discover this year is that even the spore drive can’t help them with the problems they’re facing. This is where the Red Angel mystery comes into play. You’ll be in for some surprises about what travel means in the universe.
Adult Spock is notably missing from the premiere, having taken a leave of absence from the Enterprise. But the audience does hear his voice in the final scene, as Burnham finds a log where he shares the nightmares he’s been having, saying, “I now understand its meaning, and where it must lead me.” It appears that he, like Pike, is in pursuit of these seven signals. How does this ending set up what’s to come on Discovery?

Spock looms so large in Burnham’s life. He’s been such a presence in his absence. I love the idea of watching Burnham’s relationship to Spock before we actually get to meet him. You see how much he means to her. This is a story about this deep connection between siblings. The fact that it’s so defined by absence, the fact they haven’t spoken to each other in so long, is compelling. We all wanted to put the audience in her shoes and feel her perspective and yearning for a character we wanted to get to know more about. Hopefully, it drives the mystery and whets your appetite to understand more about why they haven’t spoken.

Bookmark THR.com/StarTrekDiscovery for interviews and other Discovery coverage all season long.