Continue to The Hollywood Reporter SKIP AD
You will be redirected back to your article in seconds
Skip to main content
January 18, 2019 9:15am
Logo text
[Warning: This story contains spoilers for the season two premiere of Star Trek: Discovery on CBS All Access.]
When new showrunner Alex Kurtzman confirmed over the summer that Spock would appear in Star Trek: Discovery, fans ran rampant with speculation as to his role in the new season. The season two premiere finally revealed the part he would play, albeit without an actual cameo from Ethan Peck himself. But as the titular “Brother” of the episode, his presence (or lack thereof) still became an important topic of conversation.
The depiction of Spock occurs in very different ways across the past and present. The plot flashes back several times to Michael Burnham’s (Sonequa Martin-Green) time on Vulcan after her parents’ death, much like the previous season. But these segments primarily focus on Michael’s introduction to an adolescent Spock, who appears to never utter a word to her, only observing his adopted sister from afar.
“I don’t think he ever fully accepted you,” Spock’s father Sarek (James Frain) admits to Michael in the premiere. He reveals that one of the reasons he brought her into his house was to allow his son to learn empathy, in the hope of parlaying that into beneficial interactions with humans down the line.

Sarek’s strategy not only turned out to be a a failure, but it also left Spock surprisingly estranged from the rest of his family. Michael and Sarek both blanch at the idea of having to see Spock when the Discovery receives a party from his ship, the Enterprise, considering neither one of them have spoken to him in years. While it turns out he is not part of the crew that beams over, having taken a leave of absence from his station, his name still hangs in the air. As Sarek comments to Michael later, “There is something about your relationship that you’re not sharing. It weighs on you.”
Indeed, much is unspoken about the relationship between Michael and Spock. Martin-Green was similarly guarded when talking with The Hollywood Reporter about the subject at the red carpet of Discovery‘s premiere in New York, only saying that the two bring up “wounds from the past” in each other.
“It’s certainly a complicated relationship,” she said. “We dig into it courageously, but delicately.” The idea that Spock never talked about his sister in The Original Series prompted Kurtzman to explore their dynamic in season two. He especially relished the idea of how the half-Vulcan would eventually adopt the personality portrayed in Leonard Nimoy’s famous characterization.
“It’s the unwritten chapter of how Spock became the character that we meet in The Original Series,” Kurtzman explains. “We’ll come to understand that were it not for his relationship with Michael, many of the things we know and love about Spock may not have flowered in the way that they did.” 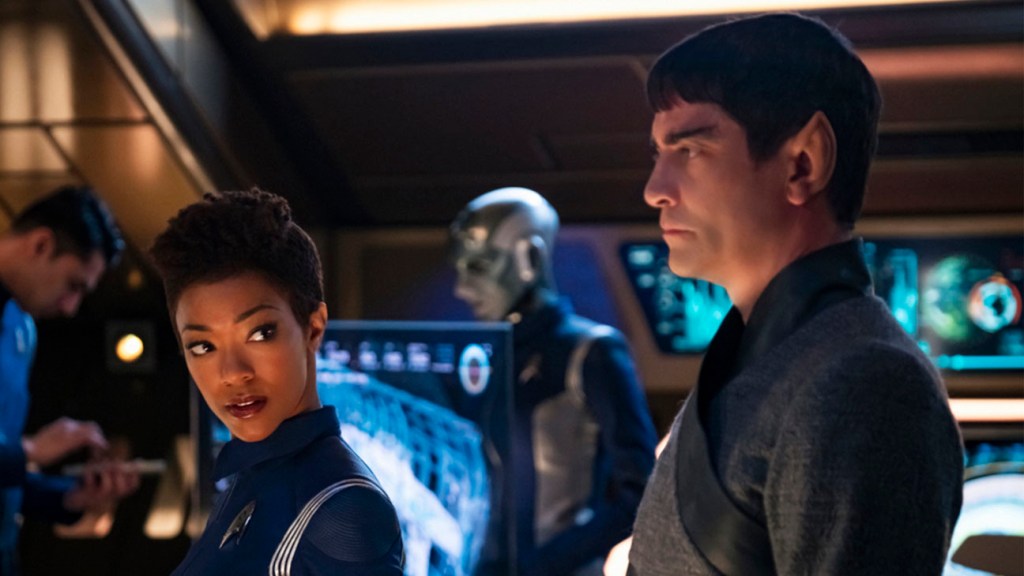 Peck was similarly excited to show a side of Spock that even fans of the show for over 50 years can find new. “You have to have somewhere to go with him. [Leonard] Nimoy’s inevitable, and [Zachary] Quinto played an alternate universe Spock,” he says. “He’s written on the page very differently and slowly but surely, he can become who we’ve come to love and adore in The Original Series.”
While the audience is exploring Spock’s unwritten chapter, on the present Discovery timeline, he’s attempting to be the author of his own narrative. Spock’s captain, Christopher Pike (Anson Mount), explains that he has been off the ship for a few months, having observed firsthand a shift in his science officer and wrestling with “a question he couldn’t answer.” For Kurtzman, the absence of Spock in the present story was a purposeful way for the audience to see the dynamic through Michael’s eyes initially.
“Spock looms so large in Burnham’s life. He’s been such a presence in his absence,” Kurtzman says. “I love the idea of watching Burnham’s relationship to Spock before we actually get to meet him. You see how much he means to her. The fact that it’s so defined by absence, the fact they haven’t spoken to each other in so long, is compelling.”

Though adult Spock is not seen, the final moments of the episode make sure he is certainly heard. When Michael searches his quarters on the Enterprise, she plays the last log he recorded before departing, revealing the question that had prompted his leave.
“As a child, I had what my mother called nightmares,” he says. “She taught me to control it by drawing, rendering my fear powerless. The nightmares have returned, the same vision again and again. I now understand its meaning, and where it must lead me.”
Those “nightmares” look to be connected to the seven red bursts that have appeared across the universe, which prompted Pike coming aboard Discovery in the first place. Preseason material revealed these signals’ connection to the mysterious “Red Angel,” which Michael also sees while stranded on an asteroid earlier in the episode. Kurtzman says the meaning Spock is alluding to in his log refers to the crisis he’s undergoing of weighing emotions versus logic, and how that may connect him back to the person he silently met all those years ago. 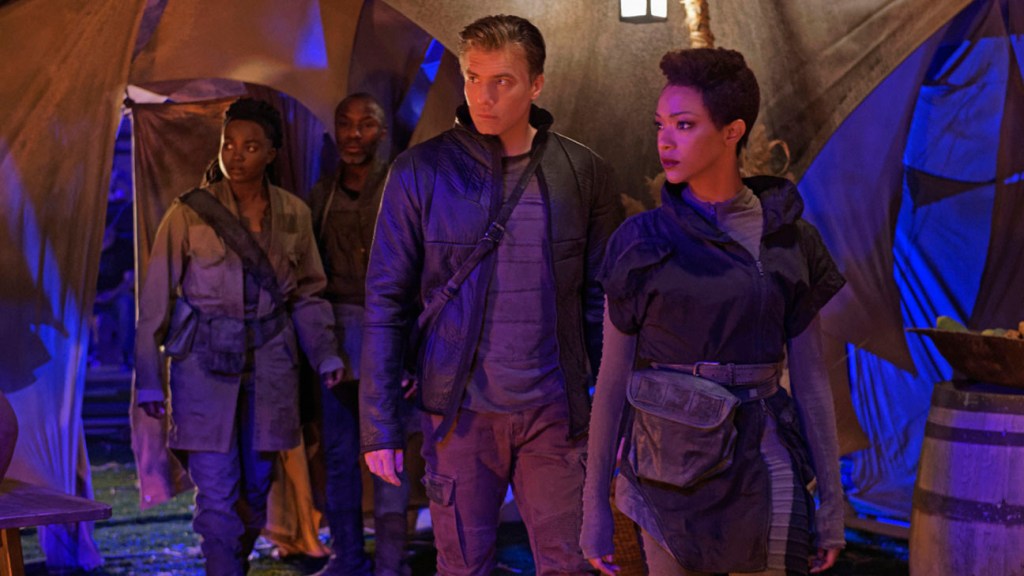 “It sheds specific light on Spock’s dilemma at that point in his life,” he explains. “Spock has, as we all know, a very unique relationship to logic. And logic fails him in dealing with the Red Angel. He doesn’t know whether to turn to logic or emotions to solve the mystery. The only way he can work through it is with his sister, to whom he has a very complicated relationship. It felt like a really wonderful way to get them to have to wrestle with each other over a larger mystery.” Peck adds onto Kurtzman’s metaphor by giving a thesis of his unwritten chapter: “How do the extremes of logic and emotion interface?”
The episode closes on Burnham staring wide-eyed at the reveal of Spock’s next steps. “There are so many things I wished I’d said to you,” she admits in voiceover, “so many things I want to say now. I can only pray I don’t lose you again, Brother.” Considering the path he’s pursuing at the moment, her prayers may go unanswered.
Make sure to bookmark THR.com/StarTrekDiscovery for full coverage all season long.