[This story contains spoilers for season two, episode six of CBS All Access’ Star Trek: Discovery, “The Sound of Thunder.”]

Star Trek: Discovery‘s newest episode expanded the mythology behind first officer Saru, played by Doug Jones. The CBS All Access drama addressed deep-seated mysteries that revealed the authoritarian state Saru’s people exist in, a commentary on the growing state of fascism in the world today.

“The Sound of Thunder” brings the USS Discovery to Kaminar, the planet of Saru’s Kelpien species. Saru comes back home in a turbulent state, having survived a disease that his people believed to be terminal, which has prompted generations of sacrifice to the predatory Ba’ul. But a deep dive into Kaminar’s history reveals that evolved Kelpiens had hunted the Ba’ul to near extinction centuries ago. Since then, the Ba’ul have utilized their technology to gain the advantage over their enemies, perpetuating isolationism and misinformation to maintain their dictatorial power and hamper evolution. Despite the Ba’ul’s efforts to contain the truth, Saru and the Discovery crew trigger a planet-wide transformation in Kelpiens. Their biological changes have replaced fear with power, breaking down the walls of years of oppression.

Jones talked with The Hollywood Reporter about Saru’s immigrant narrative, the power of revolution against tyranny, future projects and Oscar controversies, and more.

How does Saru’s story personify the refugee/immigrant experience?

Saru is a refugee because if he stayed on his home planet, he would have faced death. As we know now, it would be premature. Now that he’s reached out and been taken into the care of Starfleet, he sees a world of opportunity that he didn’t know existed before. It’s a very exciting time for him. You can certainly draw those parallels with immigration and the current state of events on planet Earth.

What is interesting about Saru as an immigrant analog is how much value his otherworldliness provides to Discovery. His unique set of skills has allowed the crew to accomplish extraordinary things throughout the season.

What I love about Saru’s journey is that he wasn’t just salvaged from another planet. He is an active member of this society that he’s become a part of. In fact, he’s a thriving member of it. He learned ninety-four languages so he would be the smartest person he knew. He has been working very hard to be the best at what he does, and he’s worked his way up to being a high-ranking officer on a starship. He’s been offering a whole lot to this new society he’s been a part of. 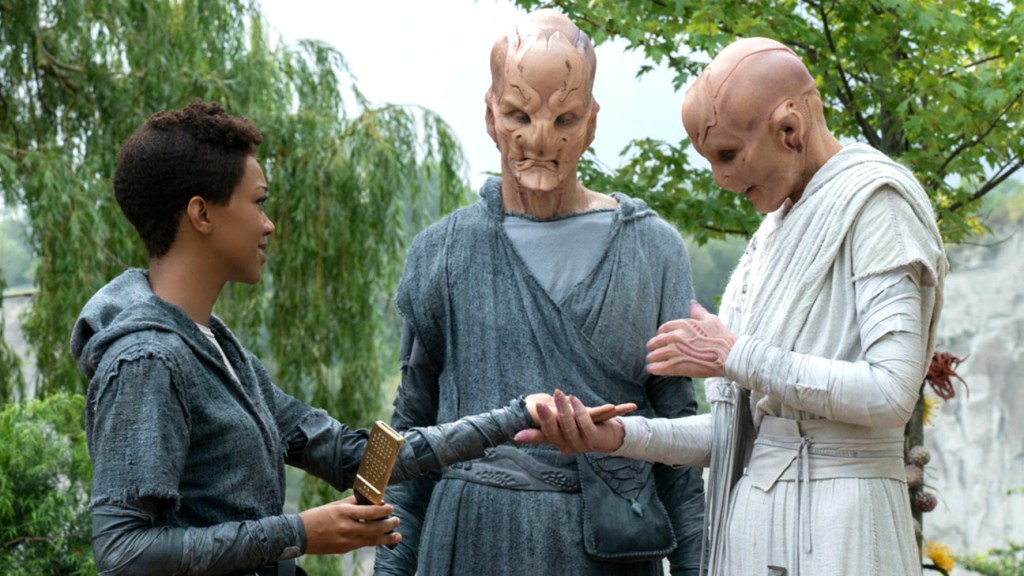 How do you believe the relationship between the Kelpiens and Ba’ul, specifically the element of the “watchful eye,” compare to life and the connection to the government in countries like North Korea?

There are absolute similarities. In the Short Treks episode “The Brightest Star,” you get to see where I come from and what terms I left [on]. The “watchful eye” and the Ba’ul have provided something called the “great balance,” and we’ve been duped into thinking it’s just the way it is, and our part is to be swallowed up and controlled. And we just accepted that. Then my threat ganglia fall out, and I’m not fearful anymore, which changes everything. They’ve been lying to us the entire time. It does make you question authority in general. Is authority always right? Do we just bow down to it and never question it? Citizens of countries that are being suppressed might want to stop and ask that question.

Saru’s evolution emphasizes behaving out of power rather than fear. Considering the state of the world, was there anything you pulled from to exude that new attitude?

When I played these episodes, current affairs and current politics were not going through my mind at all. I was so immersed in Saru’s personal story. What related to my particular heart more was anyone who has hopes and dreams that are above and beyond where they’re at right now. Do we have the power and choice to make those decisions along the way? To get us there to those hopes and dreams? I believe the answer is a big fat yes.

Do you find any connections between that renewed sense of ambition to the “resistance” and the increase in social protest after the 2016 election?

You can draw those parallels if it sings to you. If you wanted to look at politics, you could say the United States had the initial “resistance” from England. We fought back against royal rule and decided to become a nation of our own. There was, of course, a lot of mayhem to make that happen. But that American spirit of “we can do it” has always been there and comes up to the current day, and even into the future through the story of the Kelpiens.

Saru initially left Kaminar not out of fear of what’s to come, but hope as to what could be accomplished. How resonant is that dichotomy with those who face the multiple forms of oppression that exist today?

This is a theme that so many of us as human beings on Earth can relate to. Many of us have fear, and good reason for it. How do we overcome that in our daily lives? I know I’m afraid of so much and have learned a lot from playing Saru that there’s a way to push my threat ganglia back in and carry on. What a beautiful thing it is to have a fear base, but then think, “Are my fears founded in anything real? Or is this just the small world that I’m living in? If I look outside of that, will I have a better perspective on that fear and how to overcome it?” 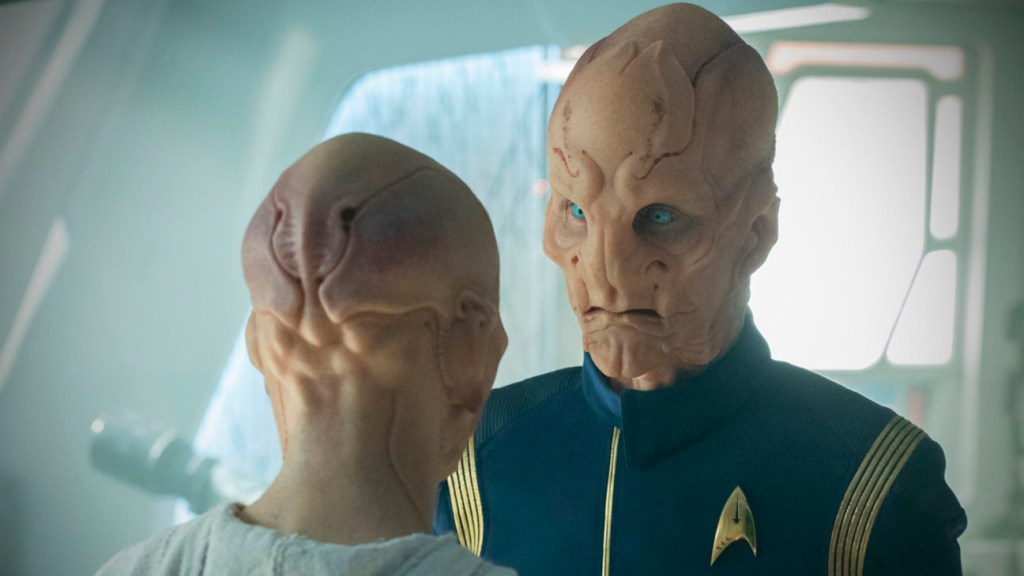 The Academy Awards are coming up. Considering your involvement in last year’s Best Picture winner The Shape of Water, what are your thoughts on the Academy’s temporary exclusion of Best Cinematography, Best Live Action Short Film, Best Film Editing, and Best Makeup and Hairstyling from the live broadcast?

The latter particularly is a category near and dear to my heart. I grew up in Indiana, and I didn’t know anything about filmmaking. I knew who movie stars were, and I knew the movies they were in. When I watched the Oscars, of course everyone wants to see the actors and the pretty people dressed up. But then I learned about all the other categories. You’ve got Sound Editing, Sound Mixing, Visual Effects, Cinematography, Editing, all of which the common folk doesn’t know about. When they show clips of the nominated movies, you can see “before and after” to see what goes into each element of a picture. Then there’s the makeup and costuming and hair, where you take a person off the street, and they come out of a makeup chair looking completely different. There’s so much education in those categories.

If the Academy Awards are celebrating cinema itself, then I say the telecast should take as long as it takes. But I also understand that it’s a TV show and ratings are essential. The worldwide audience is getting shorter attention spans, so they want it to be hipper, edgier, and more concise. Whatever it takes to get ratings up. I understand the pressure they’re under. But I applaud the Academy for listening to the concerns and acting accordingly.

Looking ahead, you’re playing the lead role in David Lee Fisher’s remake of Nosferatu coming out later this year. What’s your reaction to getting to wear such a classic cowl?

I’m very excited about that. That was a lifelong dream of me to play not just a vampire, but a classic one like him. Plus I’m making a cameo on What We Do in the Shadows on FX, so I’ve been getting into the vampire mood as of late.