Skip to main content
October 1, 2017 6:30pm
Logo text
[This story contains spoilers from episode three of CBS All Access’ Star Trek: Discovery.]
After setting up a complex backstory for series lead Michael Burnham (Sonequa Martin-Green) and the politics of space in its first two hours, the third installment of CBS All Access’ Star Trek: Discovery unveiled the central premise that will propel the story through its first season.
Set six months after the events of the two-part premiere, Sunday’s “Context Is for Kings” shows a very different Burnham and Federation.
Since the fall of the USS Shenzhou at the hands of the Klingons, an all-out war has erupted between the alien race and the Federation, while Burnham sits in prison. That changes with the arrival of the USS Discovery, led by Capt. Lorca (Jason Isaacs).
Burnham now finds herself immersed in a new world. As a prisoner being kept on a Starfleet vessel, she has no rank or power. She’s also without anyone to rely on. For executive producer Akiva Goldsman, who directed the third episode, this dark time for Burnham is important to Star Trek: Discovery‘s larger story.
“Burnham doesn’t fit into the Starfleet picture right now. She’s a convicted mutineer and that does not a member of Starfleet make you,” Goldsman tells The Hollywood Reporter. “One of the things [co-creators] Bryan [Fuller] and Alex [Kurtzman] wanted was to see the world of Star Trek through the eyes of somebody who isn’t a captain.”

After everything Burnham has been through, how badly does she still want to be part of the Federation? The Burnham in episode three is very different than the person she was as first officer of the Shenzhou. She’s been hardened by the death of Capt. Georgiou (Michelle Yeoh) and the idea that she’s responsible for the war with the Klingons — and the deaths it caused. Those moments have forever changed her, which is the core of what Discovery is exploring.
“Our first year is about who this terrible moment leads her to become,” Goldsman says. “The version of herself we met and she knew is shattered by the end of episode two. [It’s about] who she will become as a result of the loss of innocence, the loss of her view of herself, the loss of a simpler and less war-torn Federation.”
Much of that story will be told through the relationship she develops with the crew of her new home on the Discovery and that starts with Isaacs‘ Lorca. “This guy is the right person to be in charge in war,” the actor tells THR. “I’m not sure you would want him at your Christmas brunch table or that he’s the right person to be in charge in peacetime. But he’s got a plan.”
By the end of the episode, Lorca’s plan comes better into focus. After initially telling Burnham that their mission was to develop a new system of propulsion, the hour winds up revealing that he had captured the monster that terrorized the USS Glenn and killed its crew. 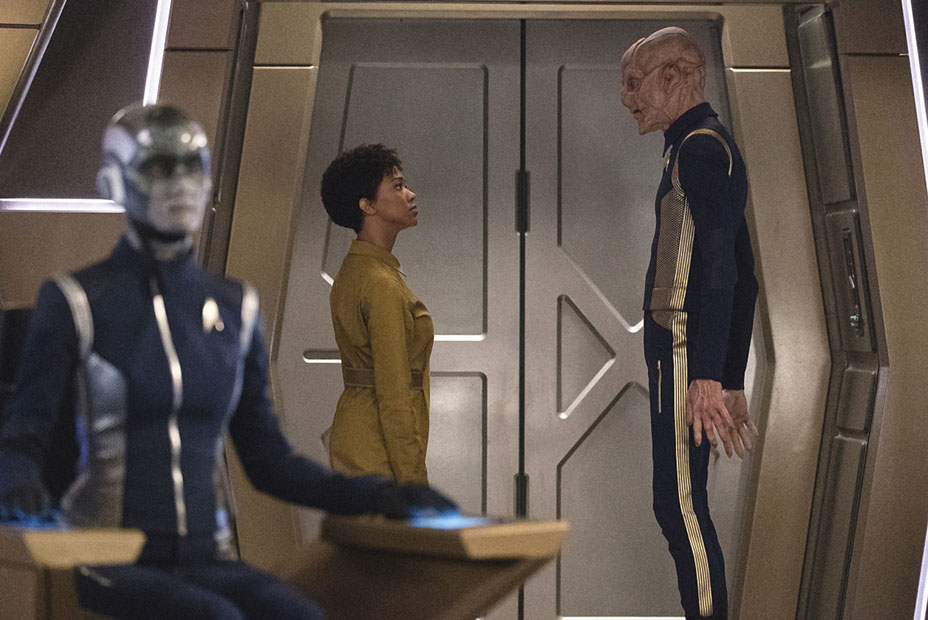 It sets up a larger mystery into Lorca’s motivations and why Starfleet selected him for this particular mission. “He’s the man to send in when there’s trouble,” Isaacs says.
That said, a captain can only be as good as the crew he’s surrounded with. In Lorca’s case, that could work against him as there’s already dissent in the ranks in the form of Lt. Paul Stamets (Anthony Rapp), who called his captain a warmonger. A scientist at heart, Stamets hates to see his work used by Starfleet as a means to win a war, which puts him in direct opposition to the captain.
“Lorca’s been tasked with working with possibly some of the most interesting and exciting technology that might help the war,” Isaacs says. “Unfortunately, it comes with a crew full of explorers and not warriors and maybe a bunch of people that are not onboard [with the war effort]. He’s going to have to marshal what resources he’s got to do a job they’re not really trained for, and that’s where a lot of his frustrations come from.”
Adds Goldsman: “Lorca and Stamets have business that needs to be dealt with, and that’s true of all the characters — [but] that’s not to say you’ve met everybody by [episode] three. We are building a family.”

Goldsman notes that it is Burnham’s interactions with the captain that viewers should keep the closest eye on. While she may have committed mutiny on her former ship, she believed it was the right thing to do. And that conviction for Lorca is a powerful weapon to have.
“He sees in her someone that is prepared to go against regulations to get done what needs to be done, and this is wartime,” Isaacs says. “Lorca thinks that that he needs to have people around him who are going to get things done and save the Federation and everybody in it. Whether she can trust him or not isn’t his concern. He’ll go ahead and do the things he needs to do and she’ll make her own judgment. He’s pretty confident she’ll make the right choice.”
Goldsman hints that somewhere along the way — whether it’s through her combative relationship with Stamets, a reunion with Saru (Doug Jones), her roommate (Mary Wiseman) or the captain himself — perhaps Burnham will find a way to fit in with this new team.
“Star Trek has always been about family,” Goldsman says. “The bridge crew is a family. I think it’s what we were drawn to, and you can see it articulated already in the first couple of episodes. Lorca was put into Burnham’s life for a reason. We are challenged at the places we are most vulnerable and Burnham couldn’t be more vulnerable than now when it comes to trusting herself or others.”

New episodes of Star Trek: Discovery are released Sundays at 8:30 p.m. ET on CBS All Access.