Continue to The Hollywood Reporter SKIP AD
You will be redirected back to your article in seconds
Skip to main content
January 25, 2019 10:15am
Logo text
[This story contains spoilers for “New Eden,” the second episode of season two of Star Trek: Discovery on CBS All Access.]
When Gene Roddenberry created the Star Trek universe back in 1966, he had one commandment in mind: Thou shalt not speak about religion. As a secular humanist, he established that mystical thinking, superstition and faith would not exist in his vision of the future, instead aiming for an atheistic utopia. But after many years and franchises from those initial thoughts, Star Trek: Discovery has changed the scripture by embracing faith in a significant way.
“New Eden” focuses on Discovery’s interactions with a planet full of Earth transplants. Brought to the world in the midst of World War III, the 11,000 citizens live an isolated life, not knowing what exists in the stars above them. Left to their vices, they pooled their differing backgrounds into an all-encompassing sect, as symbolized by a stained glass figure in their hallowed church. This display shows that though the many religions across the planet differ in beliefs, they have one shared tenet: faith.

According to series showrunner Alex Kurtzman, the concept of belief was in mind as a theme from the very beginning of planning for Discovery season two. “In the original series, religion doesn’t exist,” he says. “Yet, faith is something that has always been a major topic in different ways. The idea of this mystery that has no answer immediately suggests a presence or force greater than anything anyone has ever known. It was really intriguing to us.”
For episode director and Next Generation star Jonathan Frakes, faith is a theme that transcends the time barriers that a series set entirely in the future may provide. “The idea we’re all naive to believe there’s not a higher power out there applies to the 24th century as much as it does to the 21st century,” he says.
For the citizens of this planet, that celestial force lies in a mysterious angelic figure who allegedly brought them to their new world, rescuing them in the face of imminent destruction. Though their society has functioned for centuries under the worship of this figure, as with all sects, there exist those who question. While the dominant Allmother (Sheila McCarthy) spouts, “We have no need of proof. We are guided by the existence of something greater than ourselves: Our faith,” there exists a skeptic in New Eden citizen Jacob (Andrew Moodie). Part of a family of scientists who had spent their entire lives questioning the mythology of the angel, he has his own set of beliefs that he will fight ferociously to prove. 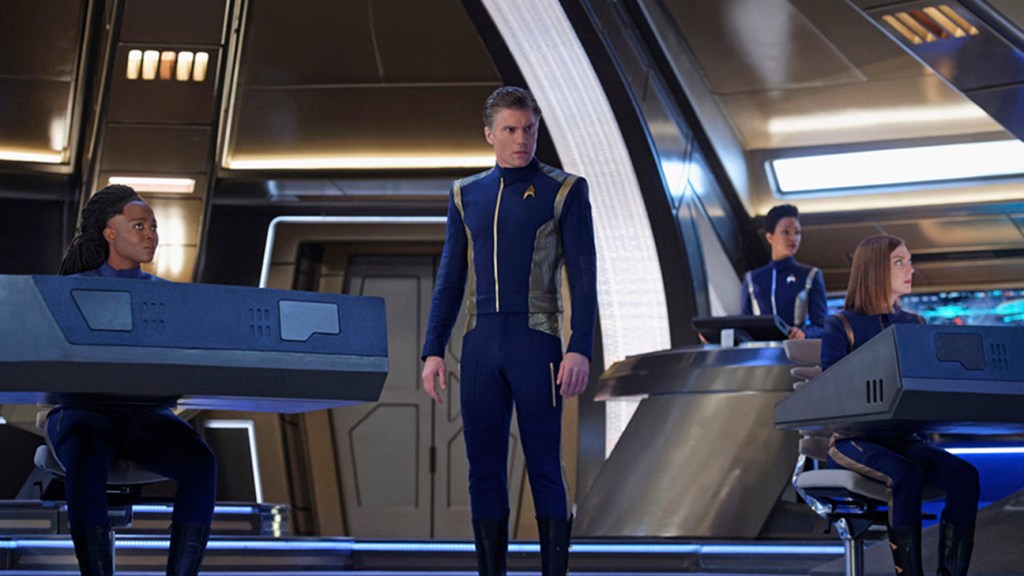 The conflict between Jacob and his people mirrors what is happening miles above them aboard the USS Discovery. Michael Burnham (Sonequa Martin-Green) is fresh from her own encounter with the mysterious “Red Angel” last episode. But her Vulcan upbringing has made her a woman of science and logic, and she immediately questions the mythical qualities of her encounter.
“There’s something about finding the courage and the security within not to trust those numbers,” Martin-Green tells THR, “and [instead] trust your heart and your gut, hope for something that isn’t readily in front of you.”
She expresses this disbelief regularly in the episode to her captain, Christopher Pike (Anson Mount). But for every comment of doubt she has, he combats it with his own idealistic philosophy. Growing up with a father who doubled as a science teacher and comparative religion student gave him early experience with straddling the touchy topics of science and faith, something he has brought into his pursuit of the seven signals that have been appearing across the universe.
“As science officer, I would advise restraint in ascribing motivation to what are now simply unidentifiable energy bursts,” Burnham states. Pike confidently responds with a quote from Hamlet that alludes to what can exist outside of what is directly explainable. He also references one of the infamous laws from sci-fi writer Arthur C. Clarke: “Any sufficiently advanced technology is indistinguishable from magic.” But over the years, the meaning has shifted appropriately in the Trek universe to now say, “Any advanced extraterrestrial intelligence is indistinguishable from God.”

Clarke’s law gets proven when a landing party of Burnham, Pike, and Owosekun (Oyin Oladejo) touches down in New Eden, responding to a distress call. They soon entrench themselves in the community, purposely obscuring their technology to avoid confusing the planet’s center of devotion. With thousands of people in the dark on hundreds of years of human history, Burnham wants to let them into the fold, to Pike’s refusal. He references Starfleet’s Prime Directive (here known as General Order One) to not interfere in the affairs of primitive societies and instead let nature take its course.
General Order One seems to be Pike’s lone belief system, contradicting his sense of previously expressed wonder to notions like a purpose behind the signals. He spends the episode attempting to play off the charade that the party is from the planet, even on the brink of death, to avoid breaking the facade. But as Burnham points out to him later, his mission of finding the source of the Red Angel contradicts the principle of maintaining the status quo directly. “To serve one goal, the other has to be sacrificed,” she says.
Her words cause Pike to relent on his Starfleet intuition, revealing his true nature to Jacob in exchange for archival footage of the angel. “My entire family spent their whole lives hoping to get a confirmation that what we believed is true,” Jacob tells him. “And you gave me that answer, something none of them ever got. Because of you, we’re not lost anymore.” They’re words that resonate profoundly with Pike, who is looking for his own affirmation among the guiding lights of the red signals. 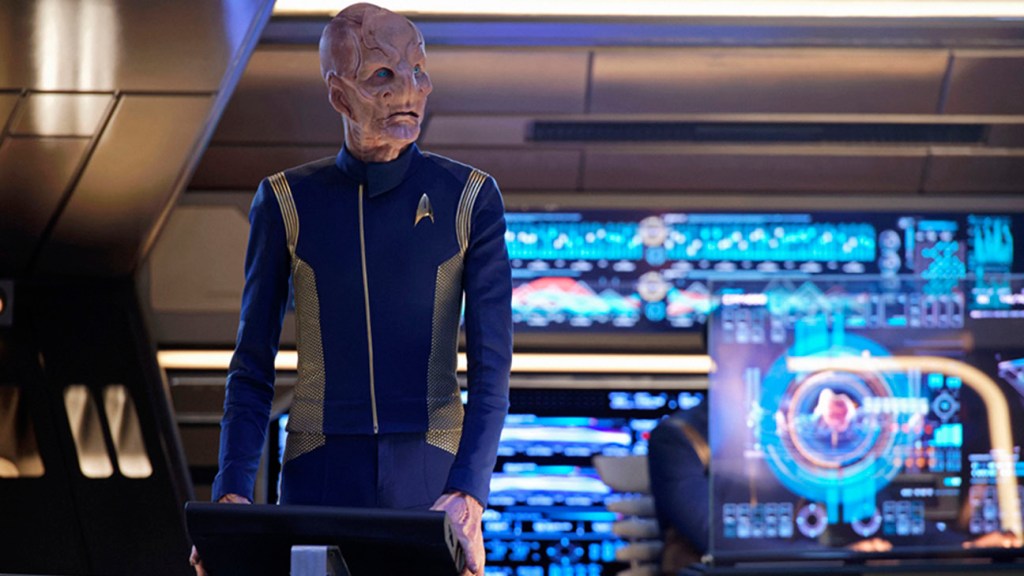 At the end of the episode, Burnham finally reveals her Red Angel experience to Pike, though she still refuses to give it religious connotation. “The word ‘angel’ carries with it certain implications,” she explains. “I saw a form; it hovered above me. And it was, to be completely honest, quite beautiful. Beyond that, I wouldn’t ascribe to it divine properties.” But he points out the value the figure has by comparison with the people of New Eden. Her experience has provided context, and as he says, “Context can alter our perspectives.”
As such, “New Eden” shows how the context of Star Trek over the years, as well as the changes in society around it, has altered perspectives on faith in the franchise. “We’ve evolved as a culture a lot since Gene Roddenberry was with us,” says Frakes. “We have to stay current on so many levels, in the filmmaking and storytelling.” Discovery has made an effort to address a heretofore taboo subject, showcasing that even in a universe without conventional religion, conviction and conflict in belief systems still exist. They shine bright and ever-present, like a mysterious and meaningful signal in the stars.
Make sure to bookmark THR.com/StarTrekDiscovery for full coverage all season long.