Skip to main content
December 6, 2018 6:30pm
Logo text
[This story contains spoilers for “The Brightest Star,” the third episode of Star Trek: Short Treks.]
When Doug Jones received word that his character, Commander Saru, would be receiving a standalone episode on the Star Trek: Discovery spinoff Short Treks dedicated to his teenage years on his home planet, he thought only one word: “Finally.”
“I was really happy we could look back and find out where I come from,” he tells The Hollywood Reporter. “It had no name until now. We know what kind of family dynamic I have now. These are lovely parallels and lookbacks.”
It is indeed a key look back. After dedicating episodes to both the present and distant future, “The Brightest Star,” Short Treks’ newest episode, takes us back to the past. Saru is the only Kelpien member of Starfleet, and fans spent the entirety of Discovery’s first season wading through all the hints and exposition given by the lone representative of the newest species in Trek canon. But they now have an opportunity to see Saru’s home planet of Kaminar and his ascent to the stars, with plenty of surprises abound.

The first shock comes in the opening seconds of the short, with the depiction of the Kelpien society. The handful of remaining Kelpiens live a simple, agrarian existence, spending their days sifting through the Kalimar flora while simultaneously reconciling the fear of death (and accompanying threat ganglia) that permeates every waking moment. As Saru has said in prior Discovery episodes, Kelpiens sense the coming of death, seeing their impending end every time they look up to the stars.
It’s an understandable reaction, given the Kelpiens’ predators. Mentioned but never seen, the Ba’ul are a race who feast upon the Kelpiens. The prey, in turn, takes this as a natural part of life, all to keep what is called the “great balance” and maintain the lives of those they leave behind. In fact, they’ve turned the recurring culling into a pseudo-religious ceremony. Led by Saru’s father Aradar (Robert Verlaque), the chosen few kneel in a circle of stones, as they await the bright light and noble ending that comes from their sacrifice. Spilling blood is such a norm on Kaminar that their sand is symbolically stained red.
Jones admits that the Ba’ul reveal came as a surprise to him, given the small amounts of information he knew about Saru’s life before.
“When talking about it in season one, I pictured it more like cattle being herded, more of a farming situation that my people went along with,” he said. “I looked at the [‘Brightest Star’] script and saw it was more ritualistic. That was a bit of a surprise, but a good one that makes more sense. We’re sentient beings; we’re smart, we’re imaginative and emotional beings that can connect and have families. So it wouldn’t make sense that we would act like cattle. We accept the ritualistic religious aspect that there’s a great balance to be had, and we’re a part of that.”
It’s here where Saru separates himself from the rest of his clan. Though only a teenager — admittedly tough to tell, given the fact that Kelpiens do not wear much age on their face — he is already questioning the nature of his meaning in life. It’s a surprising character choice given the straitlaced qualities we see of Saru in Discovery’s first season. He looks up, and rather than fright, experiences wonder. The allure of the cosmos is like the moon in the vistas of Kaminar: ever-present, continually reminding him of the mysteries that lie out there.
“Saru doesn’t know what he’s dreaming about,” Jones says. “But it looks like there’s quite an expansive universe out there. There has to be more than what he just sees in this village and on this beach. With the Ba’ul, the predator species, and their technology, he’s curious when he sees the control they have and the technology they use to exert that control. That’s where his curiosity gets involved.” 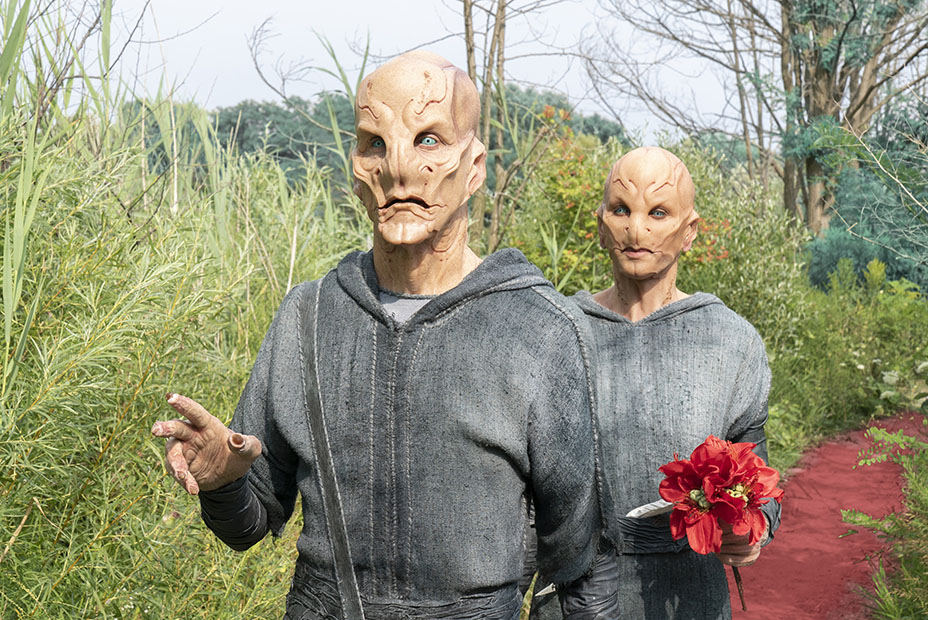 That curiosity leads him down a path that ends in a clearing featuring a familiar face. Saru is not the only Discovery character we get to see before the events of the show proper, as Short Treks re-introduces us to a then-Lieutenant Philippa Georgiou (Michelle Yeoh). Georgiou has been communicating with Saru through some reconfigured Ba’ul technology, a feat that allows him an unorthodox admittance into Starfleet. While it is refreshing to see Yeoh display warmth and guidance, considering we’re used to seeing her despotic Mirror Universe counterpart, it’s her belief in Saru that leads him to step away from his home and cultivate one of the most important relationships in his life.
“She saw my potential and was amazed by how Saru could jerry-rig the Ba’ul technology and make a communication device,” Jones says. “Who can’t relate to that story? Anyone who is successful in any craft or vocation has someone somewhere that saw potential and helped nurse that. Whether it was a teacher, boss or a parent. She represents that to me. It’s inspiring for all of us who are hoping for something better in our lives.”
As Saru takes his first spacecraft voyage, he says in voiceover, “I saw hope in the stars. It was stronger than fear. And I went toward it.” It’s a microcosm of Saru’s constant struggle with maintaining his heightened sense of fear, a lesson that Jones has been able to bring into his everyday life, albeit without the copious prosthetics.
“Many of us have fear, and a good reason for fear. How do we overcome that in our daily lives?” he asks. “I have learned a lot from playing Saru that there’s a way to push my threat ganglia back in and carry on. What a beautiful thing it is to have a fear base, but then think, ‘Are my fears founded in anything real? Or is this just the small world that I’m living in? If I look outside of that, will I have a better perspective on that fear and how to overcome it?’”
Overcoming that fear caused Saru to leave behind his most special relationship at that time, with his sister Siranna (Hannah Spear). Though less wide-eyed to the world than her brother, the two cling to each other through every culling. It substantiates the complicated relationship he cultivates with Michael Burnham (Sonequa Martin-Green) on the Shenzhou and Discovery, as he craves that sibling support during times of crisis. Siranna’s final words to her brother, though she may not realize it at the time, resound pertinently. Handing him a knife to gather flowers, she tells him, “Look down every now and then. There’s beauty there as well.”
They’re words that stuck with Saru through the years, according to Jones: “All this dreaming of what’s ahead, look down every so often. It’s one of those ‘smell the roses’ moments. As you’re walking along life towards your goal, look at the path you’re on and enjoy the journey. She reminds him of a very simple lesson. He’s been looking and striving for bigger things, but she’s reminding him of the simple. Enjoy the present day you’re in right now.”

While Saru tries to concentrate on the present, Discovery fans look ahead to Kaminar’s debut on the main show. Foreshadowed by Jones at New York Comic Con, “The Brightest Star” provides the setting and stakes for the return Saru will make to his home planet in the second season. It’s likely to be fraught with drama, given the fact that he had to leave without warning and vow to never return due to the Kelpiens’ primitive ways.
“The biggest conundrum in any contact with Kaminar is I’m forbidden to go back there,” Jones says. “A warp society that has all this technology is not allowed to interfere with the natural progression of a pre-warp society. It needs to happen on its own; they need to discover and develop things on their own. Now that I’ve lived on a starship and achieved the rank of first officer, I know so much. I want to save them from the hurting and the culling experience that we’ve always known, but I can’t go back and interfere. That’s the big thing you’ll see me wrestling with.”
With a prospective meeting with the Ba’ul, reunion with his sister and moral weight of the decision to side with the Prime Directive or his people, it’s safe to say Saru’s threat ganglia will be sure to be out and about during Discovery’s second season.