On April 14, 1996, “22 Short Films About Springfield” premiered. The 21st episode of The Simpsons‘ seventh season was notable at the time as it broke the story form of the iconic Fox cartoon by exploring — albeit in snippets — the lives of the many beloved side characters of Springfield. “This was right around the time Pulp Fiction came out, so we thought to weave it together with music and intros,” recalls Bill Oakley, who brainstormed the episode with counterpart Josh Weinstein.

A nod to Thirty Two Short Films About Glenn Gould, wherein all the Simpsons writers picked characters out of a hat (mastermind Oakley claimed Skinner and Chalmers), “22 Short Films About Springfield” was enjoyable. It was unique. It nearly sprung a spinoff series. And then it was largely forgotten. That is, until two decades later when the internet sank its creative hooks into one particular segment: “Steamed Hams.”

“I don’t know why this captured people’s imaginations or what it is supposed to represent or what it means beyond face value. But, I get a kick out of it,” notes Hank Azaria, who voices Superintendent Chalmers opposite Harry Shearer’s Principal Skinner.

Running about three minutes, the chapter officially titled “Skinner & the Superintendent,” (later fan dubbed “Steamed Hams”) in which a befuddled Principal Skinner tries to impress his boss, Superintendent Chalmers, via a luncheon at his home that quickly descends into a series of ridiculous lies and chaos, would go on to become one of the most popular moments in the show’s running 32-year history.

In the mid-2010s, memes of “Steamed Hams” began popping up. Most were videos meticulously crafted, several proceeding to rack more than a million views on YouTube, such as “Steamed Hams but There’s a Different Animator Every 13 Seconds,” posted in 2018, which has nearly 10 million views. (“I don’t know if there is any segment that has had as much repurposing as this one,” marvels current showrunner Al Jean). The fan obsession  — which includes making the burgers — was as undeniable as it was perplexing to those who created the original.

Now, 25 years later, Simpsons cast and crew unwrap making the segment, share their favorite fan creation and theorize why the bit has taken on such an extraordinary afterlife, among more in The Hollywood Reporter’s return to Springfield for the oral history of “Steamed Hams.”

Bill Oakley, former co-showrunner, staff writer: I wrote it all one afternoon. Once I got the premise, it came out pretty fast because all I wanted was food that rhymes. It logically all followed: Chalmers keeps asking questions and Skinner just keeps lying. The lie gets more and more baroque until Chalmers believes it’s aurora borealis rather than the house is on fire.

Josh Weinstein, former co-showrunner, staff writer: It was a perfect piece of comedy that I determined should not be rewritten at all. It would have destroyed the hilarious rhythm that Bill wrote.

Jim Reardon, director: It was the salad days of the show. The scripts were essentially bulletproof and it was our job to not screw it up.

Al Jean, current showrunner: I thought the episode was very clever. I remember the most I laughed was at the “Steamed Hams” part.

Hank Azaria, Superintendent Gary Chalmers: Having grown up on sitcoms, I love the ridiculous trope of taking the boss home for dinner. Oh, the merry mixups that ensue! I remember getting a big kick out of it, the boss doubting the employee’s silly little lies, but then being fooled by it.

Weinstein: In that era, we liked to make fun of classic and active sitcoms.

Oakley: The first draft is almost exactly what you see on the air. On paper, it doesn’t seem that funny, but we put it in and figured that some people would like it.

Reardon: I had already watched Pulp Fiction, but we went through it again with the storyboard guys. One of our layout guys, his name was Sarge Morton, always had an affinity for scenes with Skinner and Chalmers. So I pretty much gave him that whole sequence to lay out himself.

Azaria: It was very early on in Superintendent Chalmers’ life. The voice was different back then. It is totally unconscious on my part. I think I was trying to do a direct impression of Harry Shearer’s Skinner voice. Through the years, it got higher and a little closer to Tony Randall for some reason.

Oakley: Chalmers was my favorite character. Chalmers is the only sane man in town. He knows everything around him is crazy and people are lying and he just doesn’t care enough to pursue it.

Jean: I had nothing to do with it. The credit goes to Bill and Josh. It was one of the rare episodes I saw for the first time when it aired. At that point, I had a Disney deal. I came back full time at the end of season 10.

Reardon: The episode was a fun one to do because there were so many different bits and styles of humor. It gave you more interesting challenges because, for so many of the episodes, it’s like how to stage a scene at the couch or the living room or the dinner table that’s interesting because we’ve done it 50 times. So getting something like “22 Short Films” inspires you to try things, stylistically, you wouldn’t normally do.

Jean: I believe [creator, executive producer] Matt [Groening] wanted to use the episode as the basis of a spinoff for the secondary characters in the show, but we weren’t able to get that off the ground.

Oakley: It was going to be called “Springfield.” And it wasn’t going to be just about the minor characters, there would be other things that were outside the normal Springfield universe. And the episodes would be free-form.

Weinstein: Each episode would have been a side character not involving the Simpsons. We never knew exactly why, but I think at the time [executive producer] James [L. Brooks] didn’t go for it.

Jean: And like a lot of Simpsons things — although this is the largest example — it has an enormous afterlife on the internet. It’s insane.

Oakley: The first time I heard anyone refer to it was this Facebook thing where there was this grocery store chain in Australia called Woolworths. And people were pranking calling, asking for steamed hams. I think this was 2016. And Woolworths played along in good humor and made a little video and put out signs.

Azaria: I had a fondness for the bit, but then a few years ago, someone pointed out how it had become this popular thing on the internet. I went down the rabbit hole one night, and I found it wildly confusing. I was like, “What is all this?!” It was one of those things that made me feel old.

Reardon: I didn’t even know the mania for “Steamed Hams” until my daughters pointed it out to me a few years ago. I saw a few of the videos, but since I am not much of an internet person, I just let it go.

Oakley: My favorite one isn’t a video, but a series of photos, which is the sad one where Skinner dies. It is an eight-panel still cartoon where what happens is Skinner dies in the fire. There is a funeral. And then Chalmers is out camping, there is the aurora borealis and he sees Skinner in the sky. It’s really emotional. 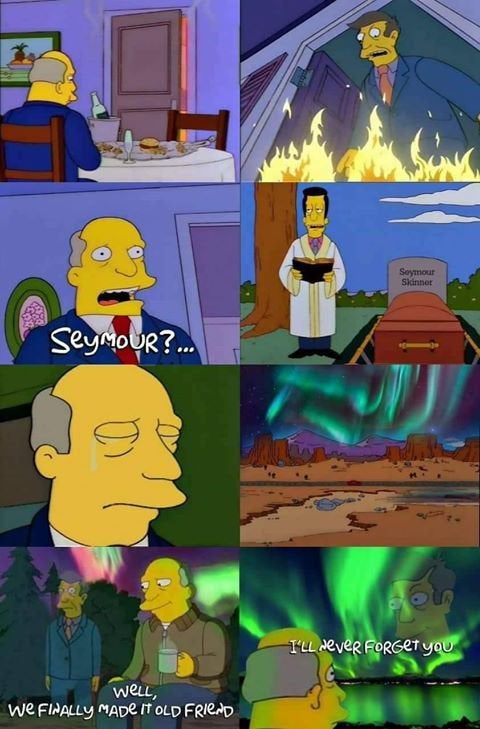 Reardon: These things breed amongst themselves, and you say, “OK, fine.”

Oakley: I like homemade stuff that the fans do, and I love some of the really weird ones.

Reardon: I am happy it gives people pleasure after all these years. As an artist, it’s the best compliment you can receive.

Azaria: My assistant recently mentioned to me that she thought maybe one of the deeper meanings behind it became, in this day in age, people just say whatever lie they feel like saying. So, claiming the aurora borealis is in the kitchen makes about as much sense as other things people claim. And asking, “May I see it?” just sums up the moment we are in, where it is like, “Can you prove to me that’s true?”

Weinstein: Maybe it is one of the best explorations about lying in our culture.

Azaria: We’re approaching 800 episodes of The Simpsons. Each episode has, conservatively, 20 bits inside it. So that one would be picked out, and it’s this one? It’s just very random.

Oakley: It’s one of my most favorite things I have ever written and it is certainly the most famous. It’s going to be on my tombstone, there is no question about it.

Weinstein: When we started making the show, the internet was still in its infancy, so we had very little fan contact. We were writing for ourselves. So it’s been awesome to see all the memes that have exploded. We love it, and I know Matt Groening loves it too.

Oakley: If you go on Etsy, you can find hundreds of “Steamed Hams” things, like shirts. I don’t own the rights to anything, but I don’t begrudge the fans making their own things. Disney might have a different opinion.

Azaria: I like to think that these things don’t happen totally by accident.

Oakley: It’s a two-word thing, like “Dead Parrot” from Monty Python. It serves as a calling card to me that doesn’t pay any money but does allow me to have a tiny bit of fame.

Azaria: I guess in a way, this is keeping that comedy tradition alive. That fact that it is such a trope of comedy and became such a staple of every single show out of the ’50s, ’60s and ’70s doing some version of the boss is coming home for dinner. So maybe that’s why that bit, in particular, is more deeply embedded in our comedy subconscious. Memes have become sort of the comedy torch getting passed.

"Mr. Plow" at 25: How the 'Simpsons' Classic Pushed New Boundaries and Helped Cement the Show's Legacy