Kicking off his second-ever Showtime election night live special, Stephen Colbert quickly addressed questions about why he would do such a show again, given that during his 2016 special, as it increasingly became clear that Trump would win the election, Colbert faced the daunting task of trying to reassure his New York City audience as they reacted with audible groans and gasps.

Less than two weeks later, Colbert revealed at an event that his team hadn’t prepared jokes for what ended up happening — Trump winning — and that the live show was “the hardest thing I’ve ever done in my life.”

This year, Colbert, who was dressed up for the occasion in a blue suit and silver tie and sitting on a set that looked like a replica of the Oval Office, said that while the 2016 show was “quite famously a painful experience, I wouldn’t want to be with anyone but you right now.”

Beyond that, Colbert was glad to be on Showtime, where he could curse with abandon, saying “Holy shit, this is a weird fucking election.”

Echoing what Late Show showrunner Chris Licht told The Hollywood Reporter ahead of the special, Colbert said they are both prepared but not sure exactly what will happen. “Like making cookies but we don’t know what will be in the batch,” he said.

The show, officially titled Stephen Colbert’s Election Night 2020: Democracy’s Last Stand: Building Back America Great Again Better 2020, opened with an animated segment, much like his 2016 special did, but this time Trump was shown using Attorney General Bill Barr, fully naked in another wink at the premium cable venue, to close the polls as the president declares victory first over the “China virus” and now over “China Biden.” After a bat signal with aviator glasses instead of the Batman logo went up, Joe Biden and Kamala Harris sprang into action, confronting Trump at a parade where he’s throwing stimulus money at audience and telling people to breathe in the coronavirus and not let it “dominate you.” Harris freed some mail-in ballots after attacking Barr, but Biden and Trump faced off on the street. As Trump claimed victory, Biden said democracy doesn’t die that easily, throwing a can of tuna at Trump, causing him to be carried away by a balloon that looked like the coronavirus.

The show also featured a traditional monologue, including jokes about some of the early states called for Biden and Trump and early Senate results, with Colbert going off of CBS News’ projections.

And after a bit in which Colbert poked fun at the sheer number of experts other networks have used for election night panels — checking in with as many as 15 different people, including Andrew Yang, Neil deGrasse Tyson, Madeleine Albright, Bryan Cranston, Method Man, RuPaul, Ethan Hawke and the fly from Mike Pence’s head during the second vice presidential debate, voiced by Gilbert Gottfried — he launched into the CBS News tie-in that Licht previously teased to THR.

Colbert joined CBS News’ election night team live, communicating with them via video, even though, as Colbert said, they were so close in New York City that they could “open the windows and shout at each other.” Colbert spoke with the anchors — John Dickerson, Norah O’Donnell and Gayle King — about how the race seemed to have once again come down to the upper Midwest. 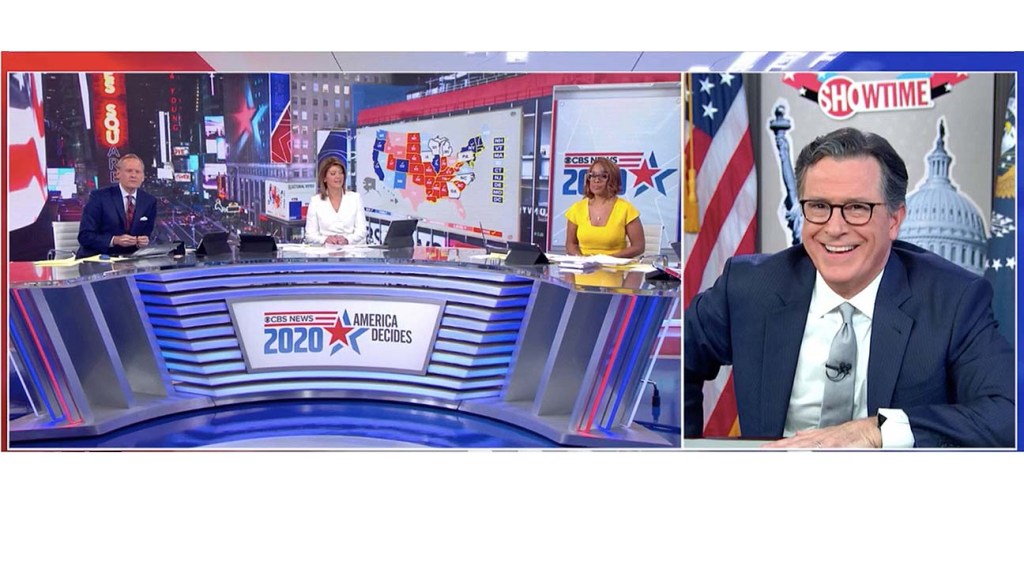 Colbert also brought on Charlamagne Tha God, who took over for Colbert, while sitting at another desk, as Colbert took a quick break. During his segment, Charlamagne spoke about what Black people lost with Trump as the president, picking up on Trump’s 2016 pitch of, “What do you have to lose?”

“Do you know how Black people felt about Green Book? Me neither,” Charlamagne said. “We didn’t watch. Hollywood always cares more about Green than Black.”

Charlamagne also blamed Trump for the death of Chadwick Boseman and other Black stars who died during Trump’s presidency, pointing out that they died on Trump’s “watch.”

“If he can take credit for Obama’s economy, he can take the blame for the death of the Black Panther,” Charlamagne said of Trump.

The Breakfast Club host also cited Kanye West as a Black star who didn’t die but was “lost” during Trump’s first term.

He also explored what people could lose with another four years of Trump, saying people would lose both everything he said they’d already lost, noting it could always get worse, and the soul of this country.

“Black people have to believe in the promise of America’s purpose,” he said in part. “If America loses its soul, Lord have mercy, it’s all over.”

Colbert then spoke to the hosts of Showtime’s The Circus, Alex Wagner, John Heilemann and Mark McKinnon, with Wagner speculating that the winner of the presidency may be declared by Thursday as ballots are still being counted in Pennsylvania, Michigan and Wisconsin. McKinnon, meanwhile, predicted that Republicans would hold the Senate.

The host was later rejoined by Charlamagne, Maz Jobrani and Jena Friedman, with Charlamagne telling Colbert to ask him how he’s feeling tomorrow.

Ultimately, Charlamagne said regardless of the election outcome, he’ll keep working to move toward a more inclusive future. “We have to be the change we want to see in the world,” he said.

In closing, Colbert once again urged patience and suggested that if voters could wait four years for the end of Donald Trump’s presidency, they can certainly wait a few more days for the results of this election.

“It’s actually a good thing we don’t know who won yet,” Colbert said. “The reason it’s taking so long to declare is because there was such a massive turnout, and each and every ballot deserves to be counted. We’ve been able to wait for this moment since 2016 and waited in lines for hours, so we all can wait a little longer.”

The show, which also featured a performance from Arcade Fire, ended with a montage of “satisfying” images.

Trevor Noah’s The Daily Show was another late night show that went live during election night.